3D-printed Gaia house is made from biodegradable materials 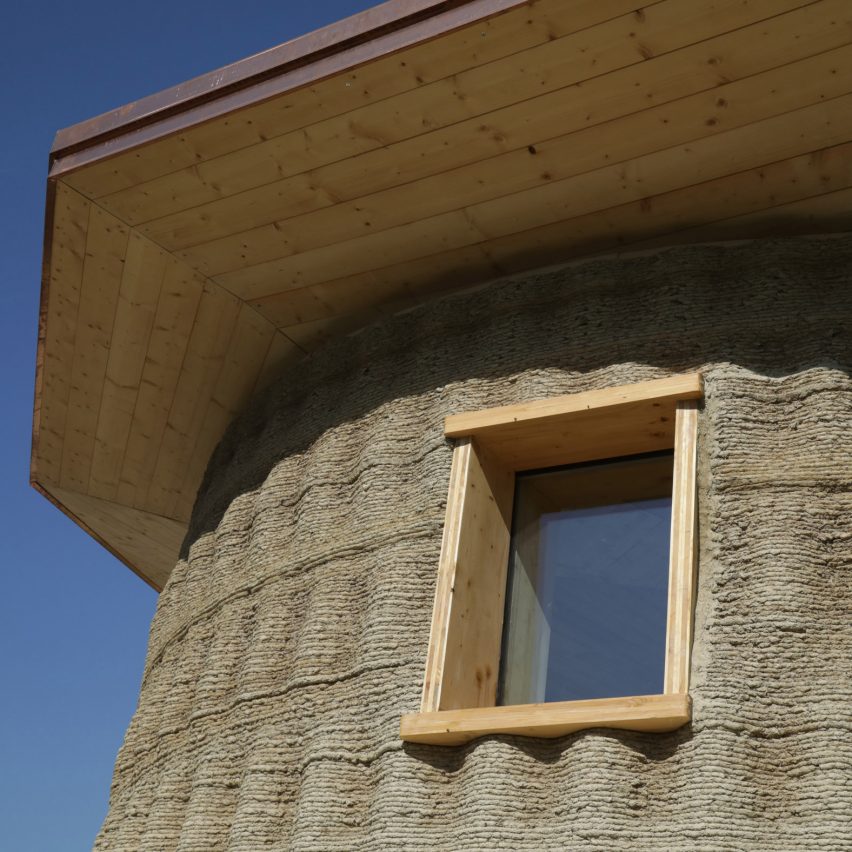 The latest instalment of our Dezeen x MINI Living series features a sustainable 3D-printed house made with soil and agricultural waste.

Italian 3D-printing technology developer WASP, built the house to showcase the abilities of Crane Wasp, a modular 3D-printer that can create homes in a variety of formats and sizes.

Called Gaia, the 30-square-metre house has a 3D-printed outer shell and internal timber beams holding a timber roof. It was printed on site in Massa Lombardo, a town in the Italian region of Emilia-Romagna, in October 2018.

The house was printed using a natural mud mixture made from soil taken from the surrounding site, as well as waste materials from rice production such as chopped straw and rice husks.

“Gaia is the result of a limited and optimised use of agricultural resources, which through technology have been converted into a complex building with a minimal environmental footprint,” WASP told Dezeen.

The company also claims the final product is biodegradable.

“If the building isn’t maintained, it will turn back into soil,” stated the company.

The mixture is layered using a 3D-printer suspended from a crane, creating walls with vertical cavities inside, which are then filled with rice husks for insulation.

The company claims this method of insulating keeps the temperature inside the house comfortable, eliminating the need for internal heating even during the winter.

An outer cavity in the wall structure is kept empty for natural ventilation in the structure and allows for an energy supply to be embedded within the walls of the house.

Rice husks were also used to create a plaster for coating the structure’s internal walls and as a layer of insulation on top of its roof.

WASP told Dezeen that the method is time efficient and cheap, taking just ten days to complete, with the mud mixture costing less than a thousand pounds to produce.

“Gaia is a highly performing structure in terms of energy, with almost no environmental impact,” the company claimed.

WASP believes that agricultural waste could become a major resource in the building industry.

“It is possible to conceive a future scenario in which one hectare of cultivated paddy field can become 100 square-meters of built environment,” WASP said.

Although this project was made with waste from rice production, WASP believes a variety of natural and recycled materials can be used in 3D-printing for construction.

“We also believe it is possible to develop materials suitable for extrusion using mixtures of materials found on sites different from this one,” the company says. “We could even use demolition waste from pre-existing buildings.”

The post 3D-printed Gaia house is made from biodegradable materials appeared first on Dezeen.