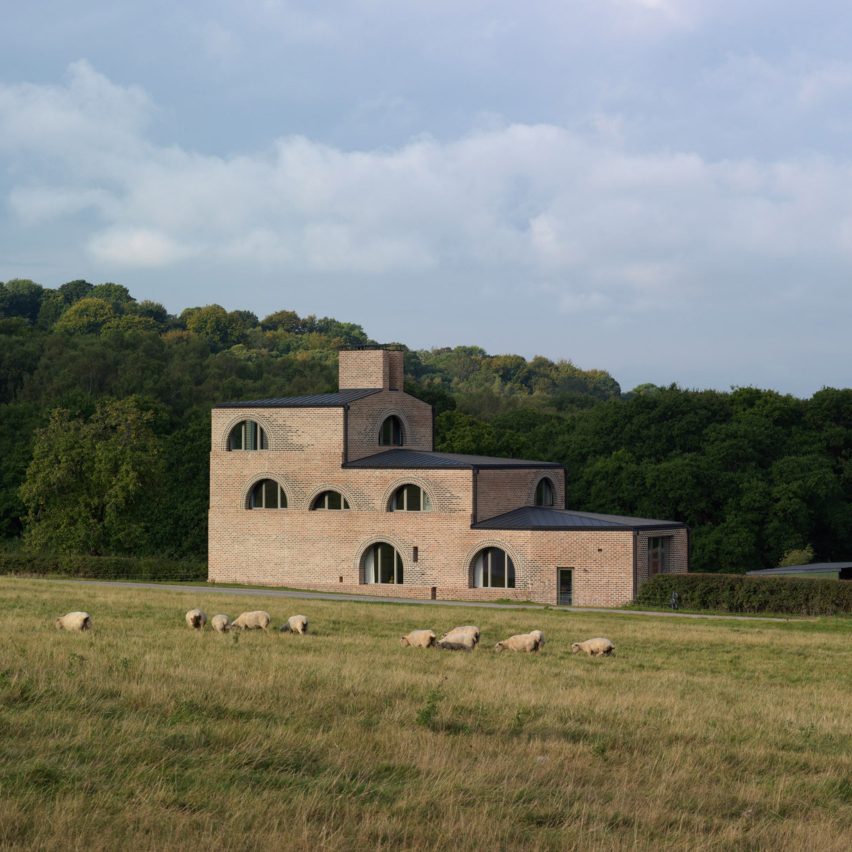 British architect Adam Richards designed the house, which replaced an old farmworker’s cottage in the countryside near the town of Haslemere, England, as his own home.

It is intended to evoke the ruin of a Roman villa and contains unexpectedly contemporary interiors characterised by the building’s exposed concrete structure. 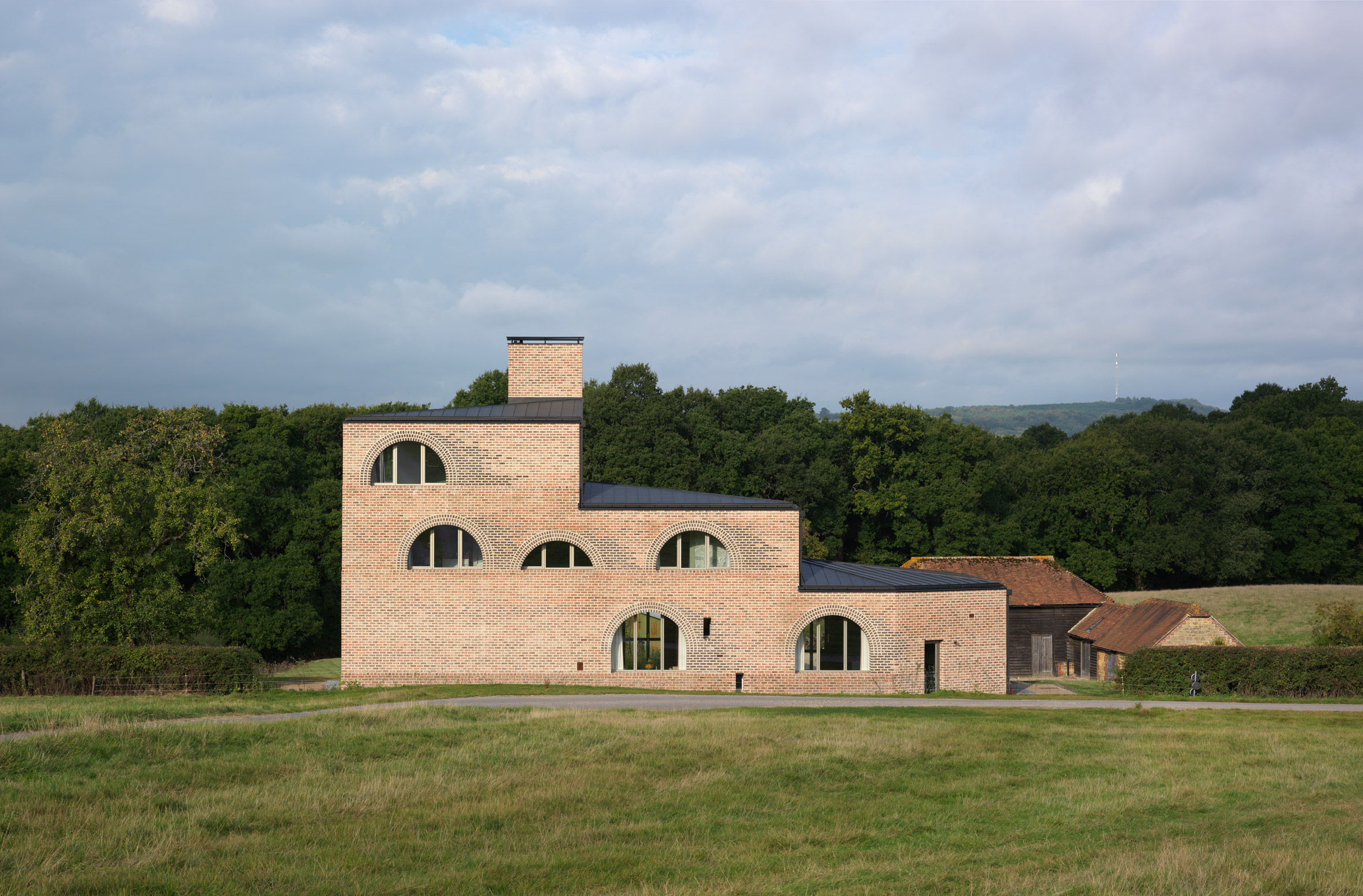 The ground floor of Nithurst Farm has a tapered plan that moves from a giant, hall-like kitchen and dining room into a bright sitting room.

This layout is modelled on the story of post-apocalyptic film Stalker by Russian filmmaker Andrei Tarkovsky . The film follows the expedition of three men through The Zone in search for The Room – a mythical place where a person’s deepest desires are rumoured to come true. 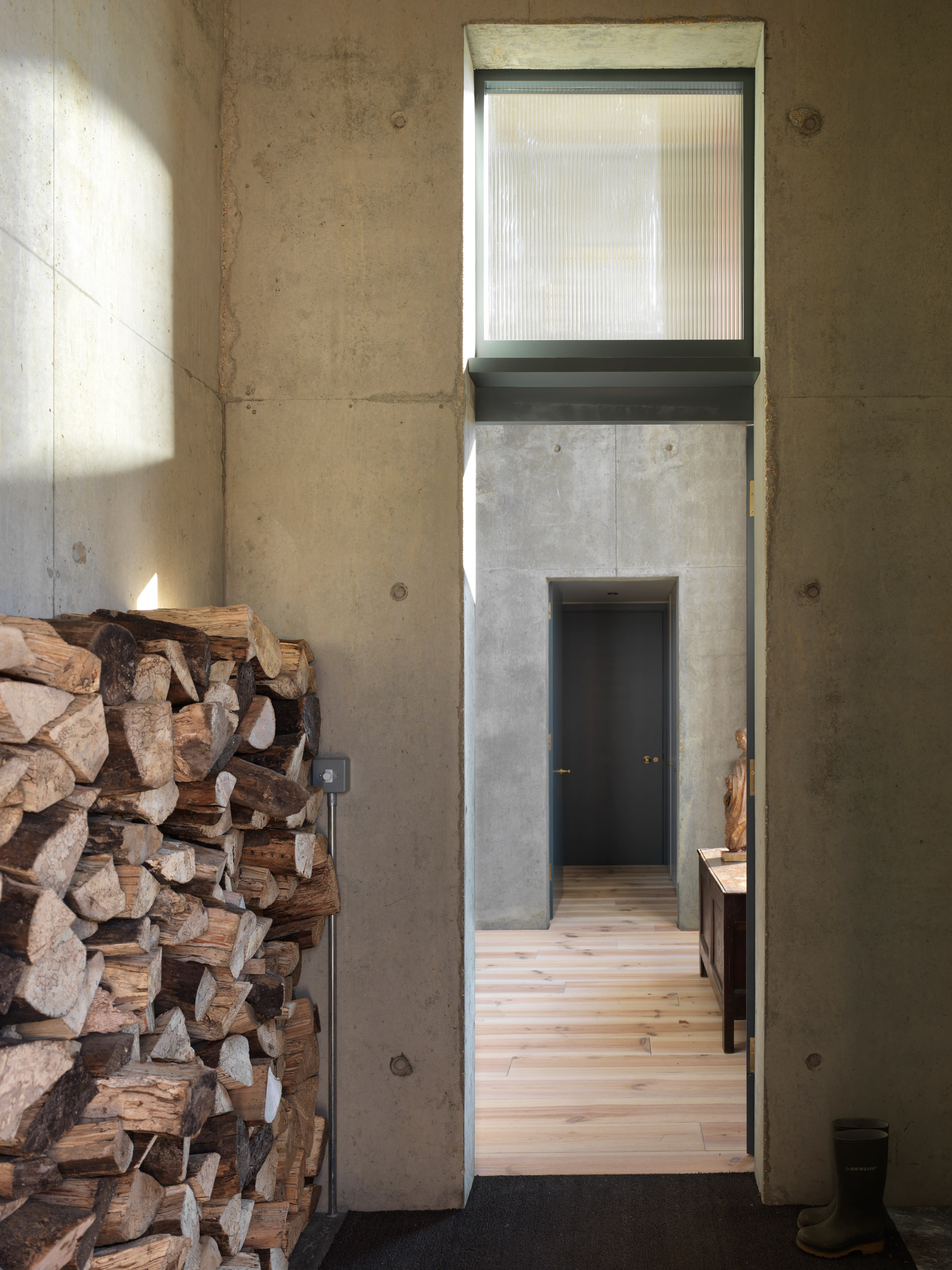 “My take on the character of The Zone in the film is that it’s structured like a religious space like a church or a chapel, and it has this concrete blocks down the side and this great wash of light at the end,” Richards told Dezeen.

“So there’s a sense that progressing through the space is this is a sort of journey to a sort of more spiritual place,” he explained. 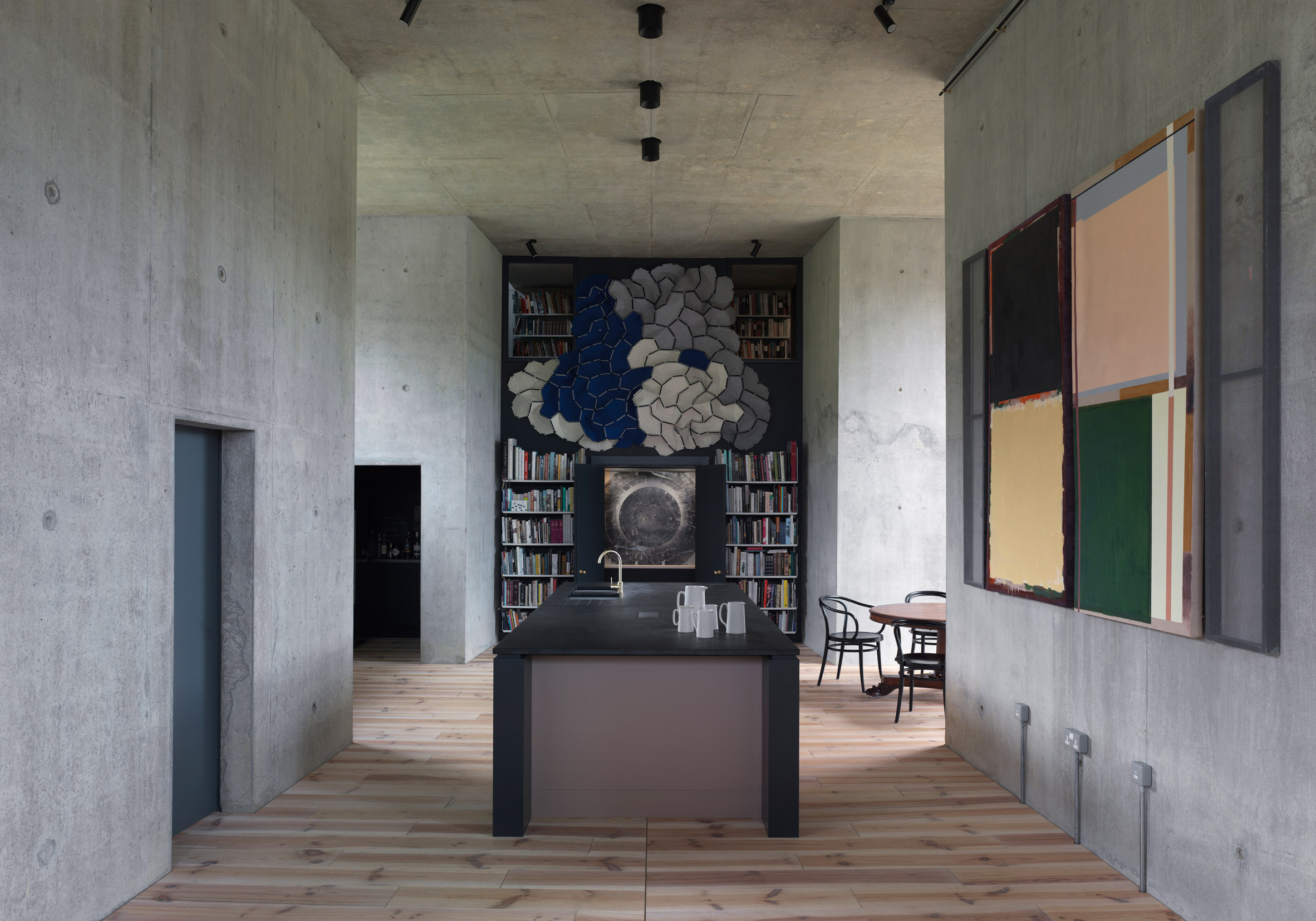 As in the film, the layout of the ground floor is designed to take visitors on a journey, beginning in the hall – a kitchen and dining room with a grand 4.5-metre-high ceiling that is symbolic of The Zone.

Around its edges, the hall has six internal concrete towers that each containing a secondary room such as the cloakroom, study and larder. The symmetry alludes to the layout of a church. 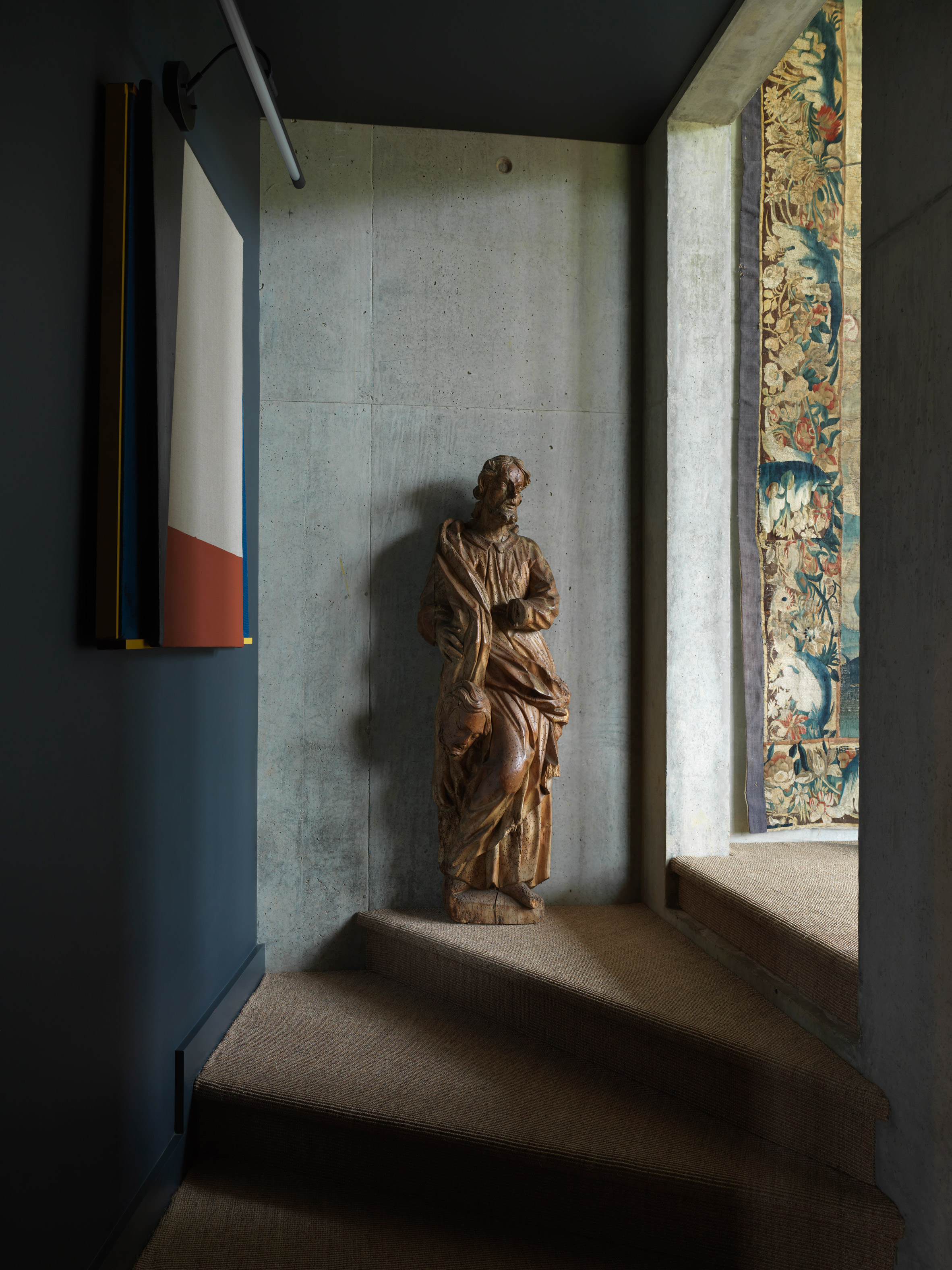 The kitchen leads out into a dark vestibule, which opens onto a bright south-facing sitting room facing out onto the garden. Referred to by Richards as “the final destination”, this represents The Room.

A subtle taper along the north-south axis of the house’s footprint towards the living room is designed to heighten the sense of the journey. 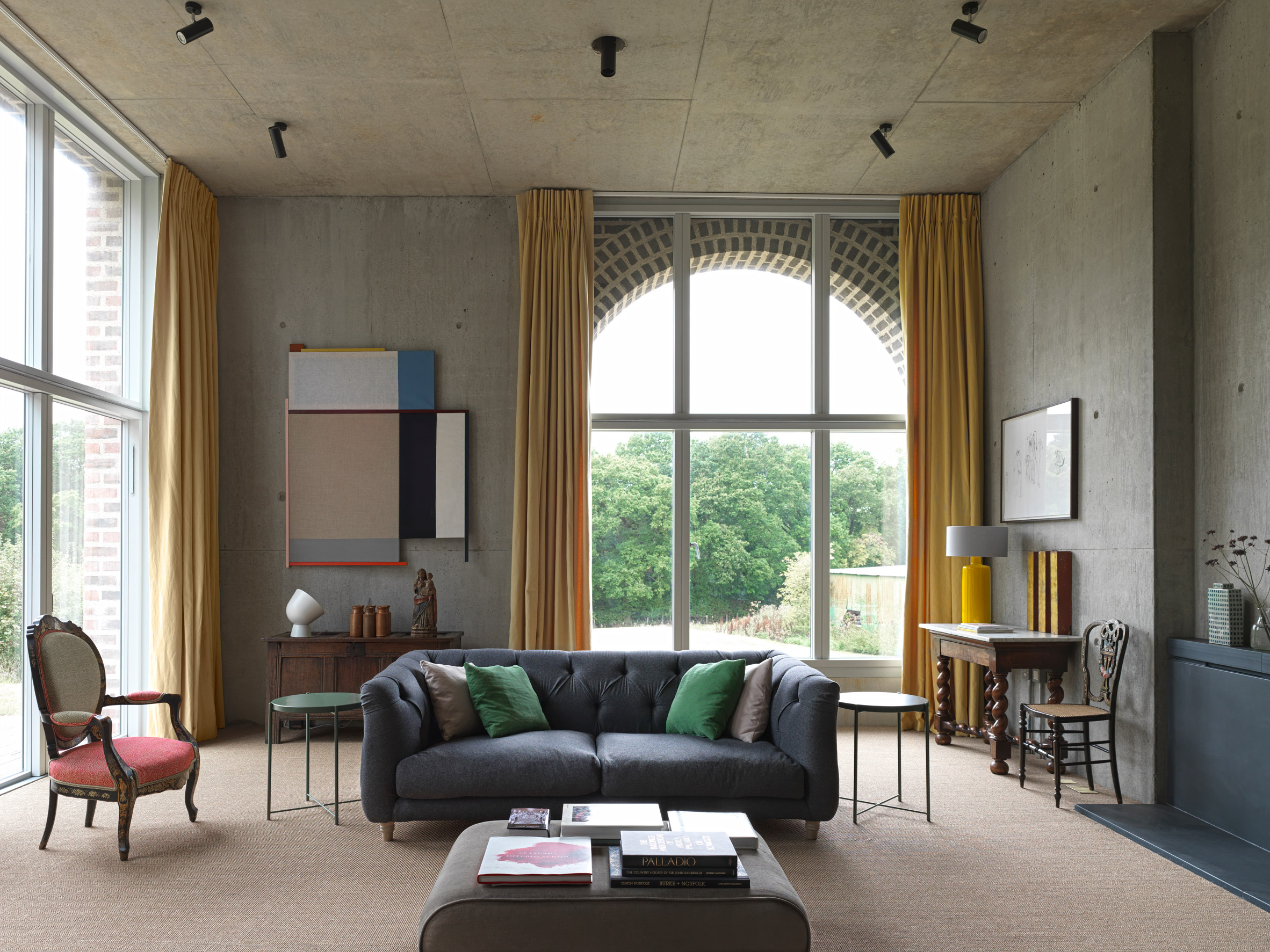 “The idea is that the sitting room is our version of the room where all your wishes come true. This kitchen is the antechamber and sets the scene for it,” continued Richards.

“I suppose it just seemed to make sense that a film abou a journey to a ruin where your deepest wishes come true is a bit like building your own house and your own place in the world.” 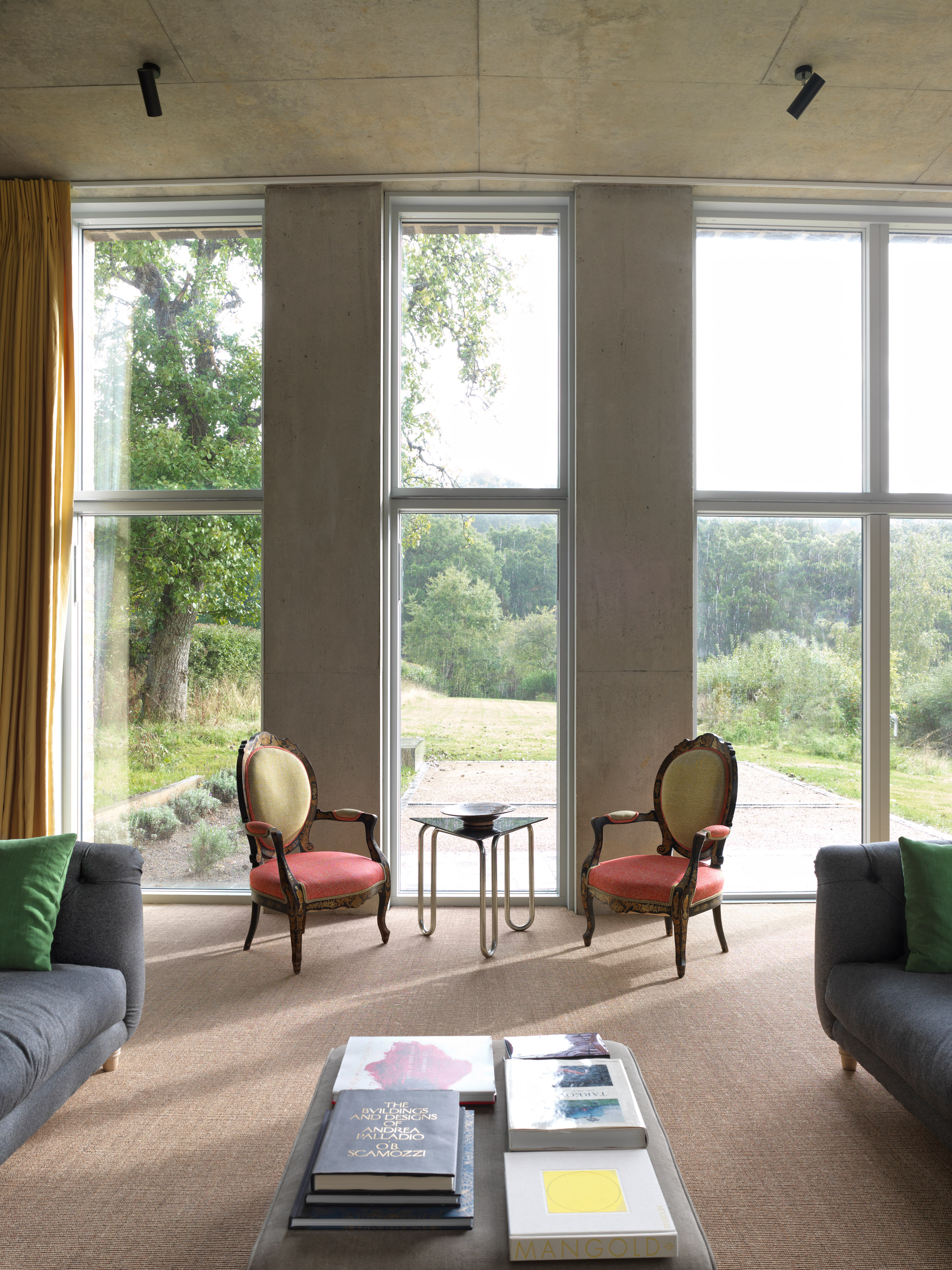 Externally, the concept of a journey to a destination is evident in the staggered form of the house, which steps up from a single-storey entrance on the north elevation to become three-storeys high.

Additionally, large arched windows with deep reveals along its long elevations are adorned with blackened bricks along one edge, designed by Richards to evoke motion lines seen in cartoons.

Inside, Nithurst Farm has two children’s bedrooms and three guest rooms on the first floor. The master bedroom occupies the top floor of the house.

The master bedroom is split into two halves – with two mirror image beds and dressing rooms that lead into a shared bathroom looking north across the countryside. 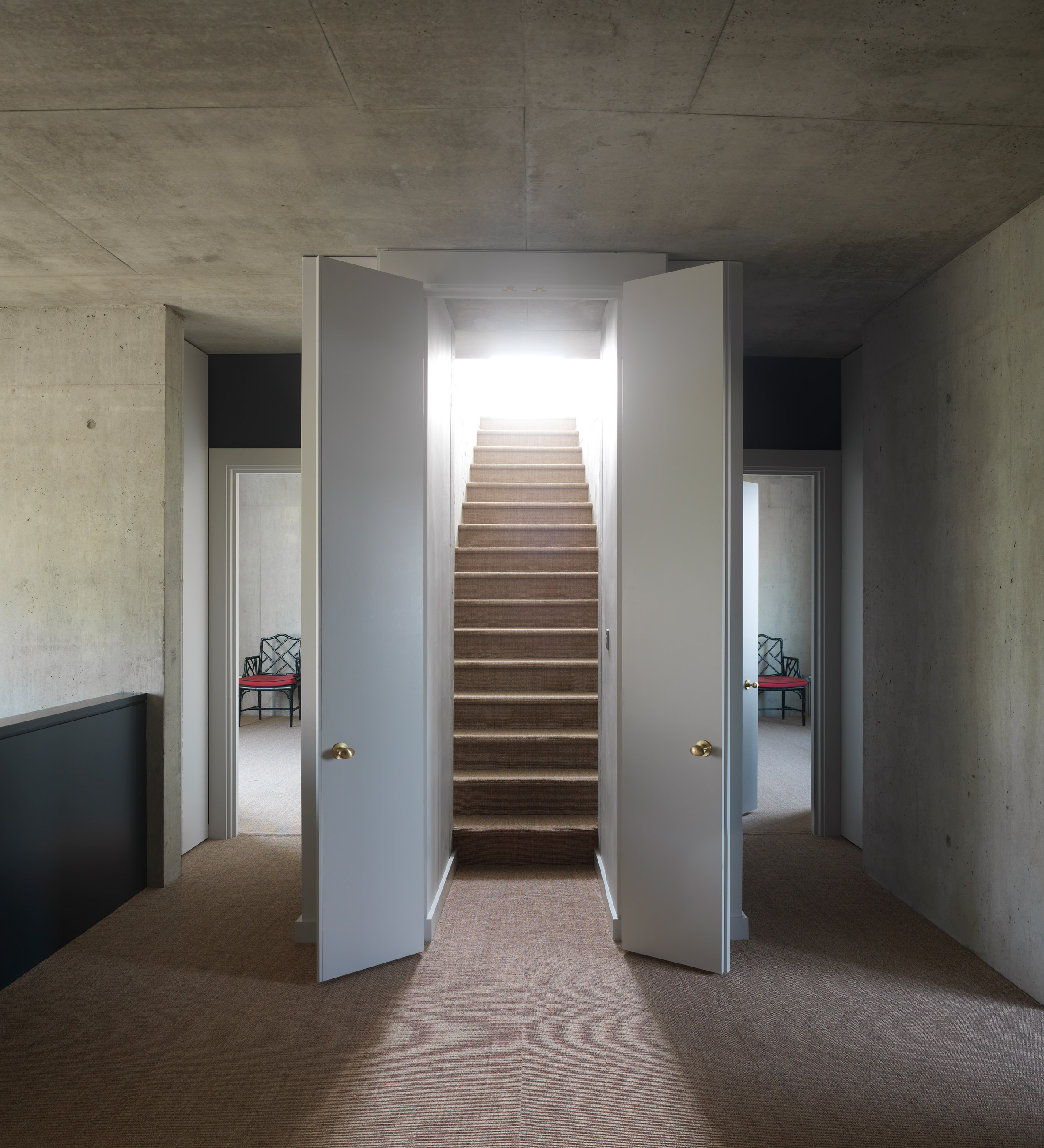 The top-storey bedroom is accessed through double doors on the first floor that open to reveal a long central staircase that ends facing a full-height window.

The stair is based on the “stairway to heaven” in the film A Matter of Life and Death , which is about a pilot who is granted a second chance to live after a crash. 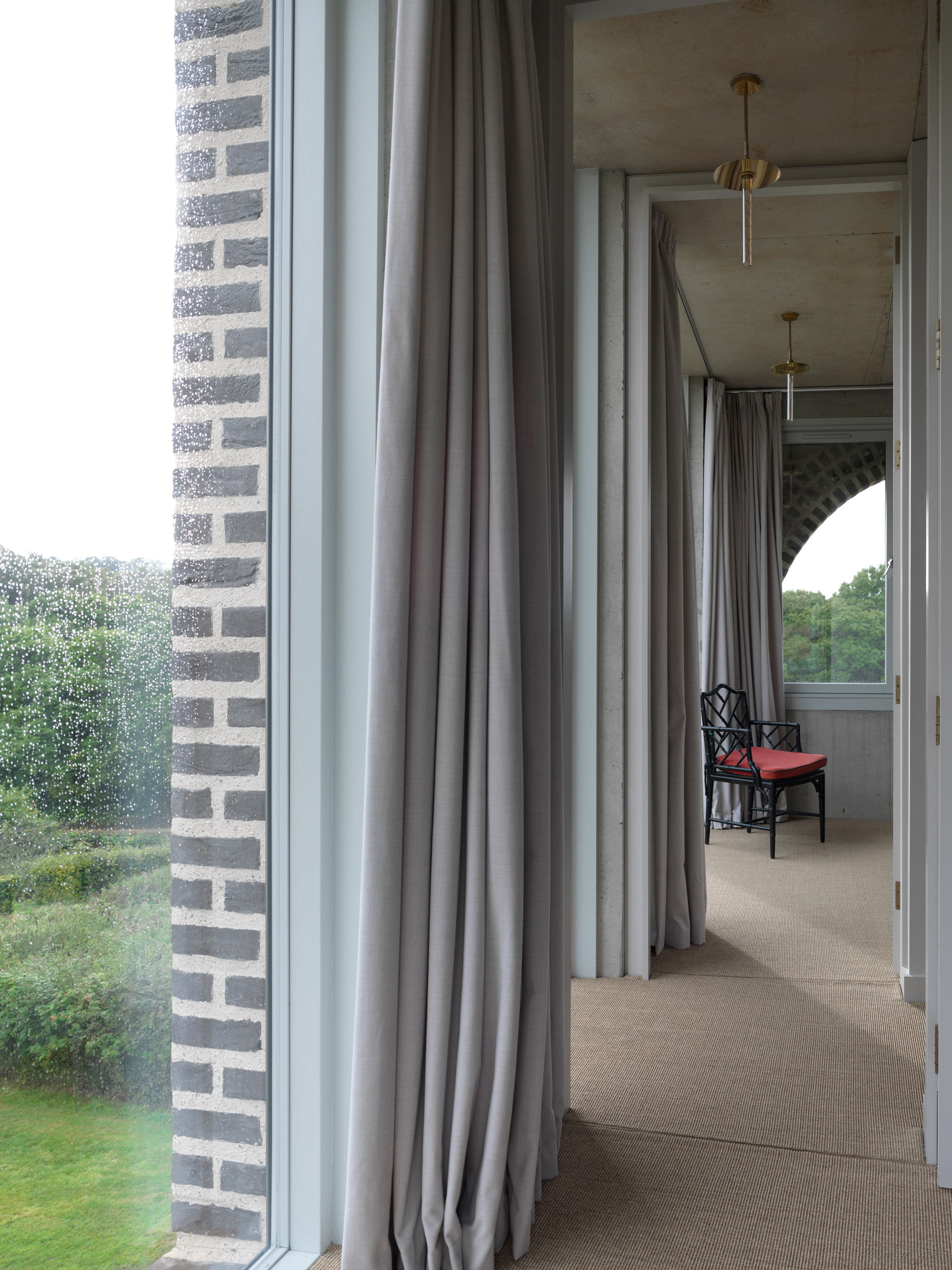 It is designed by Richards as a nod to his late father, a pilot that also lost his life and passed away in an air accident.

“I was always fascinated by this film, as my father was a pilot and he died in a crash when I was a baby. I wanted to somehow register that in the house, it’s a memorial to him,” Richards explained. 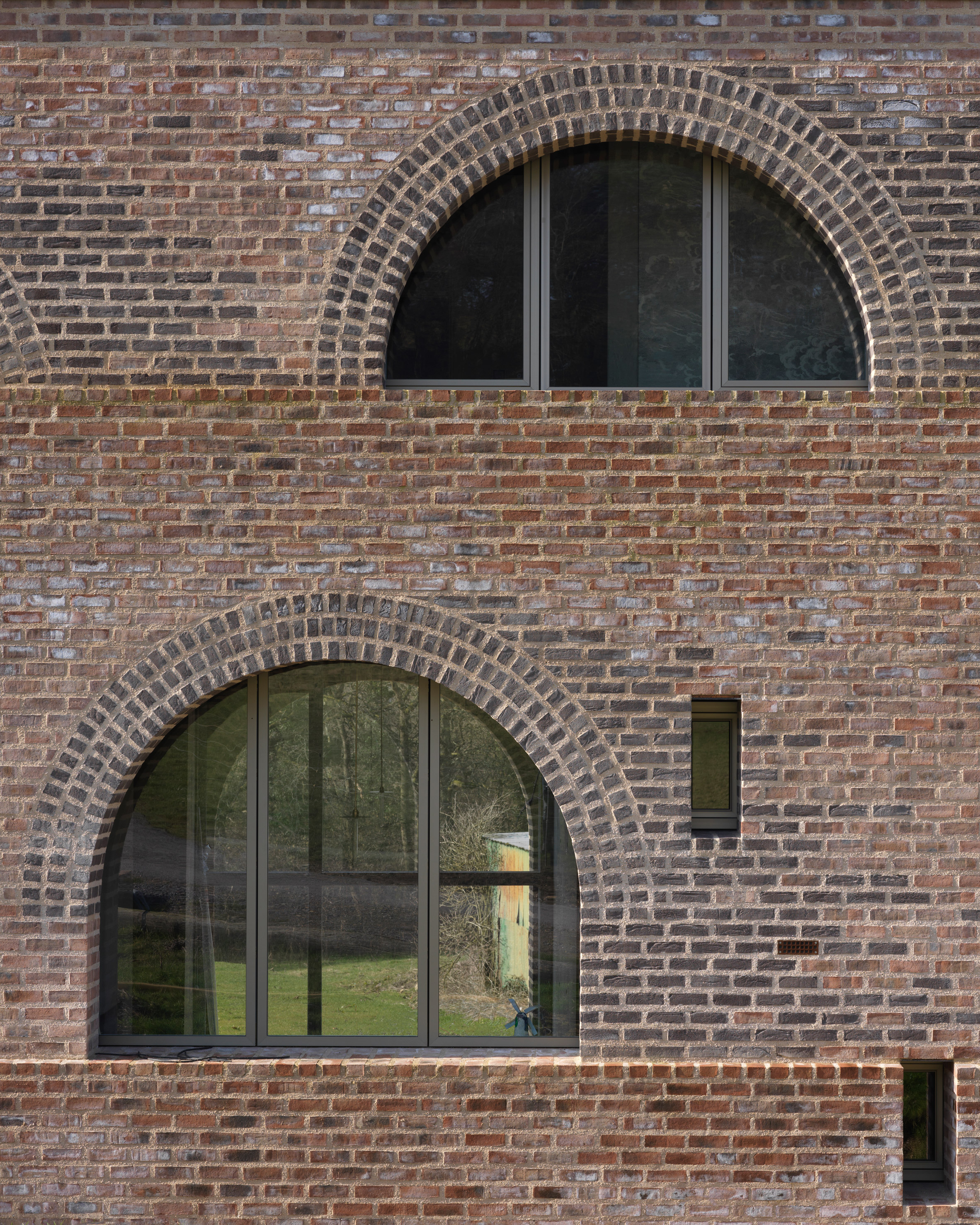 Throughout Nithurst Farm, the concrete structure is exposed, with walls and ceilings left as they came out of the formwork. This includes a swirl in the concrete on one of the towers in the kitchen caused by a jammed pump.

Richards has aimed to soften the look of the concrete by combining it with white oiled pine floorboards, sisal carpets and brass fittings, alongside an array colourful furniture, tapestries and ceramics. 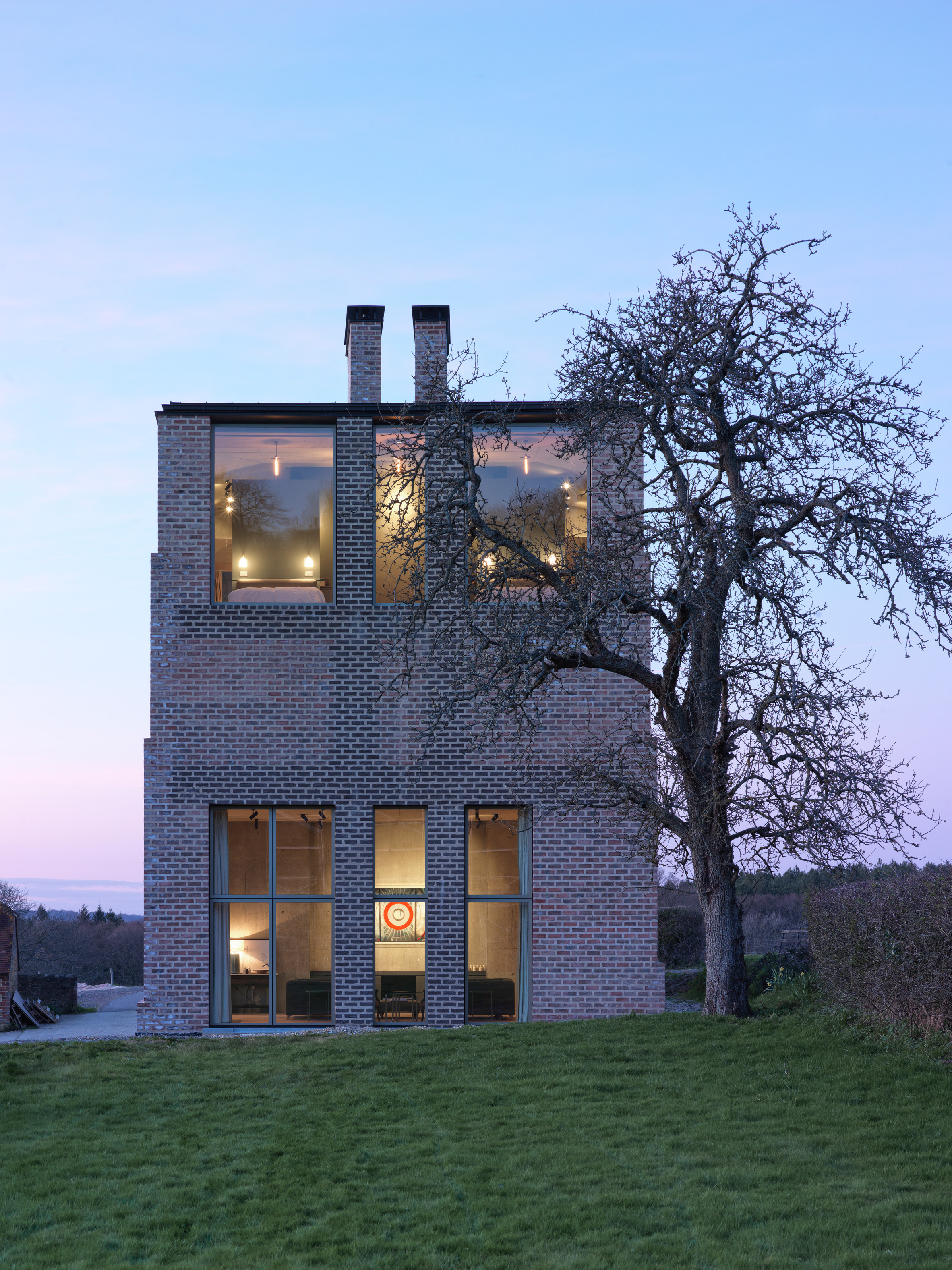 While allowing Richards to evoke the religious-like spaces in the film, Richards also chose concrete to build a structure to last “at least 500 years”.

He worked with Structure Workshop to develop the structure, and in a bid to reduce its carbon footprint, made the concrete using 50 per cent recycled material in replacement of cement. 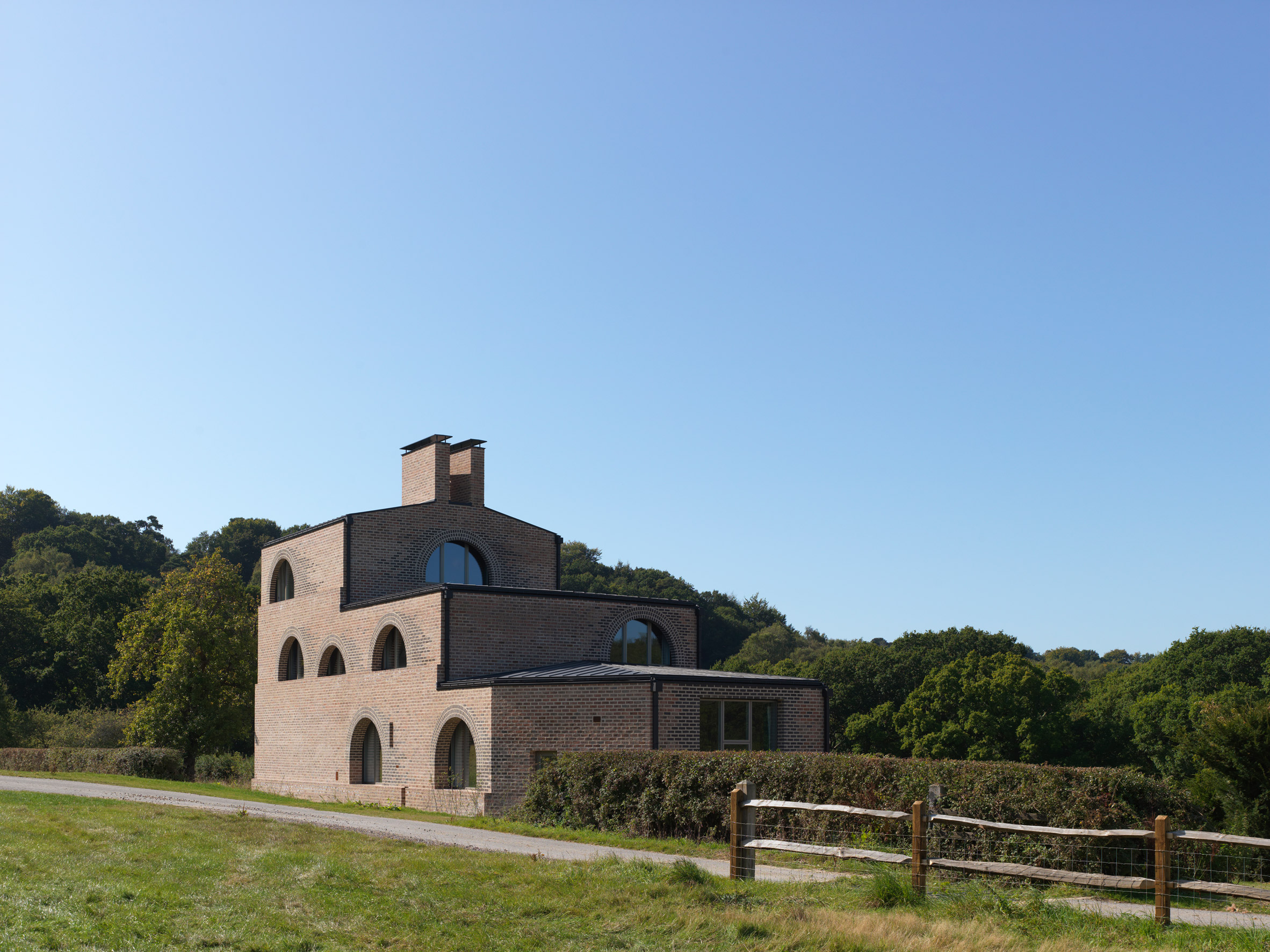 Richards founded his eponymously named studio in 2002 and has offices in both London and Sussex.

Other projects by the practice include the complete overhaul and extension of the Ditchling Museum of Art + Craft , and a house called Mission Hall that features a rounded wall of recycled clay tiles .

Photography is by Brotherton Lock .