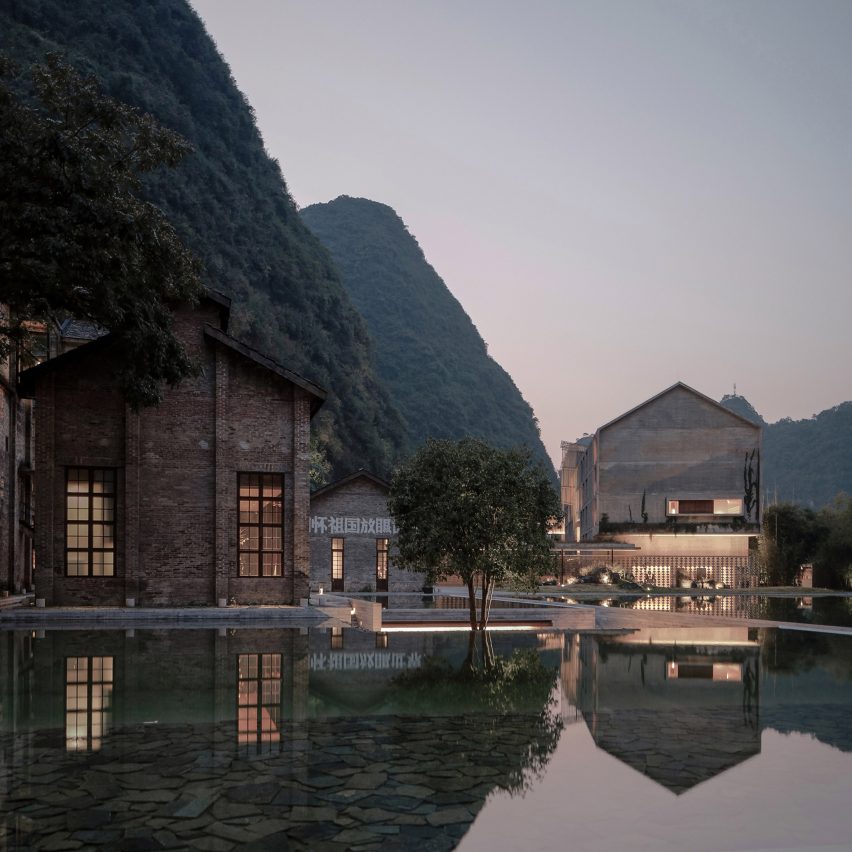 The winners of the AHEAD Global awards discuss their projects in this movie filmed by Dezeen for the hotel awards programme at the London prize-giving ceremony.

The winners of the AHEAD Global awards were announced at simultaneous ceremonies at New York’s Crosby Street Hotel and the Ham Yard Hotel in London, with a live video feed between the two venues.

Alila Yangshuo, a hotel built by Beijing studio Vector Architects in a disused sugar mill in China’s mountainous Yangshuo County, was named the Ultimate Winner at the awards ceremony.

The project was celebrated by the judges for its treatment of the heritage of the site.

“Alila Yangshuo shows that brands really can still do it, that heritage can be celebrated, and that designers can really pull off a great guest experience,” said Guy Dittrich, editor-at-large of Sleeper Magazine and host of the London ceremony.

The AHEAD Global awards represent the finale of a programme of eight regional events held over two years in Europe, the Americas, the Middle East and Africa. The winners of those previous events were pitted against each other to determine the best recently opened hotels.

“What we’re looking for with the AHEAD Global awards are projects that create an atmosphere, an experience for the guests that will live in their memory,” said Dittrich in the video, which Dezeen filmed at the Ham Yard Hotel ceremony.

The Urban Hotel – Conversion category was won by 1898 The Post, a conversion of a historic post office building in Ghent, Belgium.

Geraldine Dohogne, interior designer at Zannier Hotels Interiors, explains that the project was intended to recreate the atmosphere of the building as it would have been in its former days.

“It’s the revival of an old post office that has been empty for years,” she explained to Dezeen. “In transforming it into a hotel, we tried to give a whole sense of the building from the period in which it was constructed.”

Luxury hospitality operator Belmond won two awards  at the ceremony. The Belmond Simplon-Orient Express, a renovated train that travels between London and Venice, won the award for best suite.

While the Belmond Eagle Island Lodge, which features twelve tented guest rooms raised on stilts over the wetlands of Botswana’s Okavango Delta, won in the Lodges & Tented Camps category.

“With the Belmond Simplon-Orient Express, we recently installed three suites for the first time on this historic train,” explained Celia Geyer, senior vice president of design at Belmond.

According to Geyer, the Belmond Eagle Island Lodge was designed to have a minimal impact on its natural surroundings.

“It’s a very difficult place to build,” she said. “It was designed so that it could actually be removed and leave the landscape completely untouched.”

11 Howard, a renovation of a former Holiday Inn in Soho, New York, was one of the big successes of the night, taking home the awards for the Hotel Renovation & Restoration and Restaurant categories.

Signe Bindslev Henriksen and Peter Bundgaard Rützou, co-founders of Space Copenhagen and designers of the hotel’s interiors alongside Anda Andrei Design, told Dezeen that being awarded for their work on the project was validating.

“Feeling that there’s a certain response and resonance in what we do makes you really happy and proud,” said Henriksen.

“When your work is recognised by your peers and your colleagues in the industry, it just feels absolutely amazing,” added Rützou.

Geyer, who also sat on the judging panel for the AHEAD Global awards, emphasised that the winning properties demonstrated the expanding role of the hotelier in today’s hospitality industry.

“The future for hotel design is all about experiences,” she said. “We’re moving in a space where hospitality is blurring with other worlds.”

“One thing that I can take away from these awards is that my bucket list is getting very long.”

This movie was produced by Dezeen for AHEAD. It was filmed at the Ham Yard Hotel in London. Images are courtesy of AHEAD.