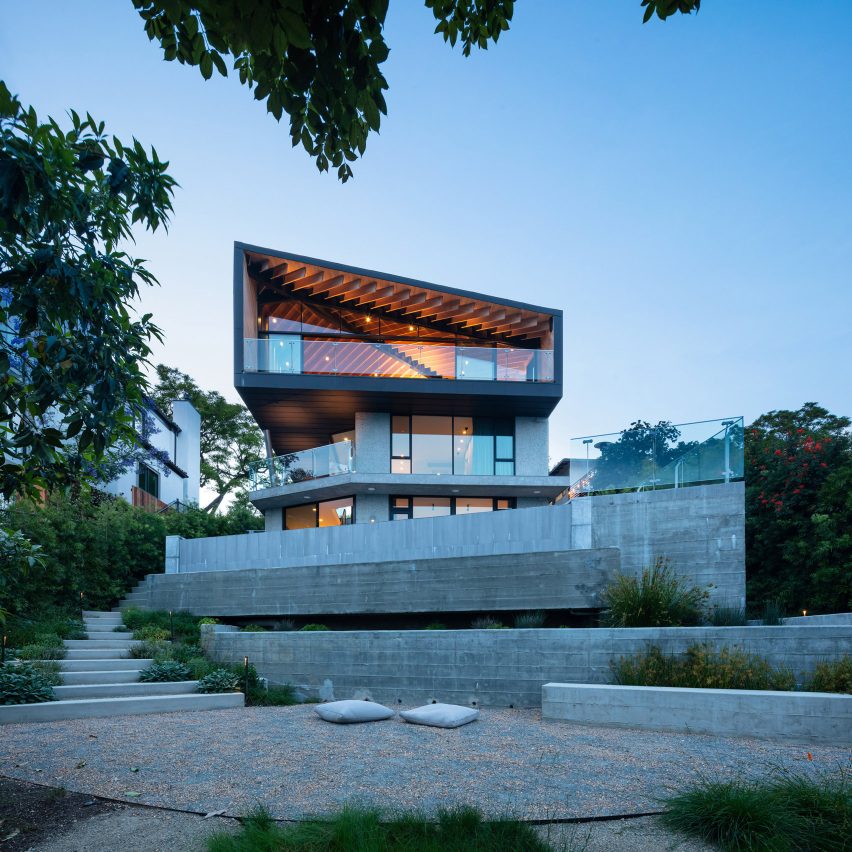 Los Angeles architect Clive Wilkinson has designed his own family home atop a hilly site to draw cues from nearby modern dwellings that resemble “spaceships on stilts”. 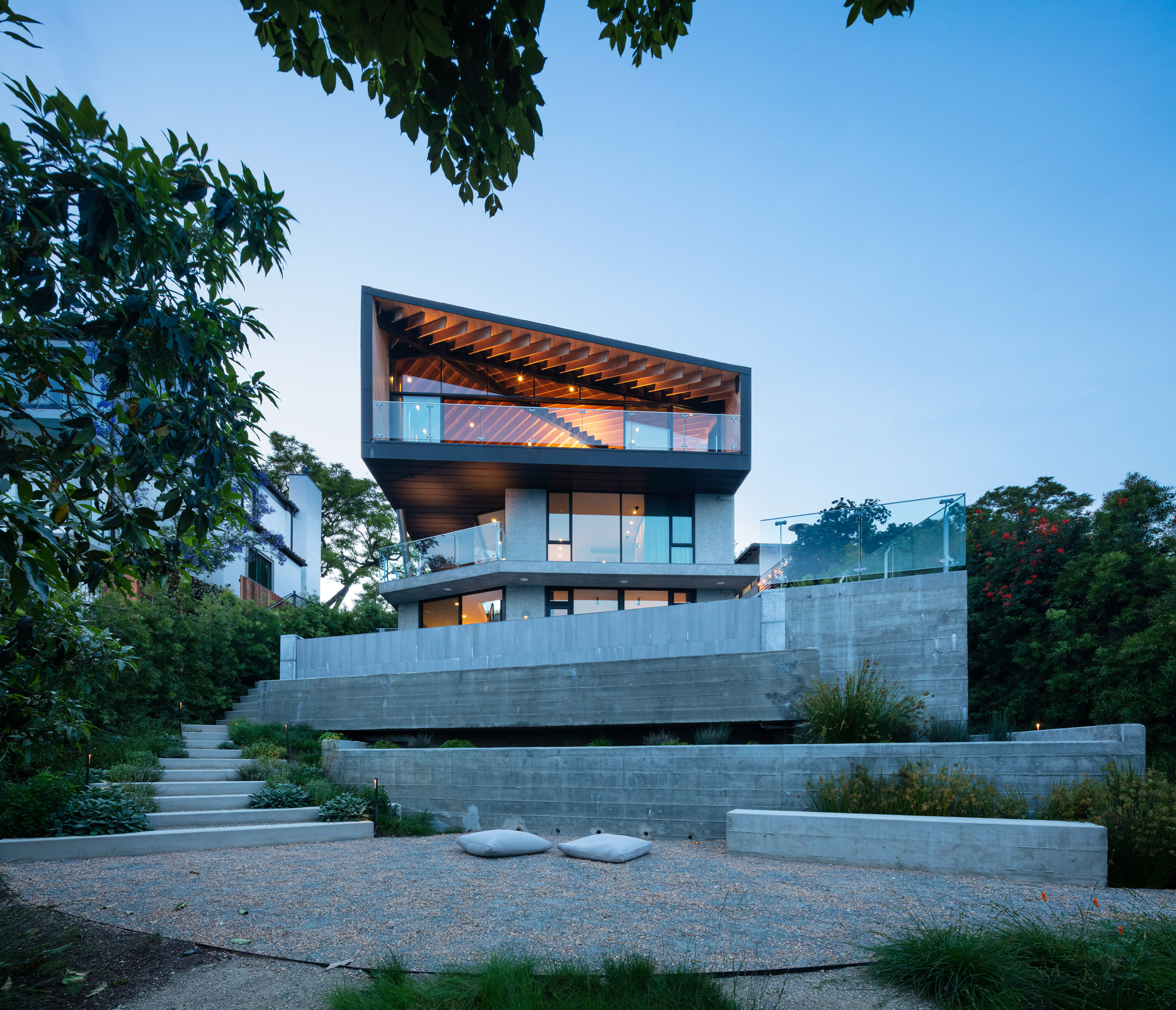 Located in West Los Angeles , the property is the home of Wilkinson, his wife, and three children.

“Wilkinson had always yearned for the slightly surreal opportunity of designing his own floating home and finally came across the chance to do so when he found a steep site in west Los Angeles for sale in 2016,” said Clive Wilkinson Architects . 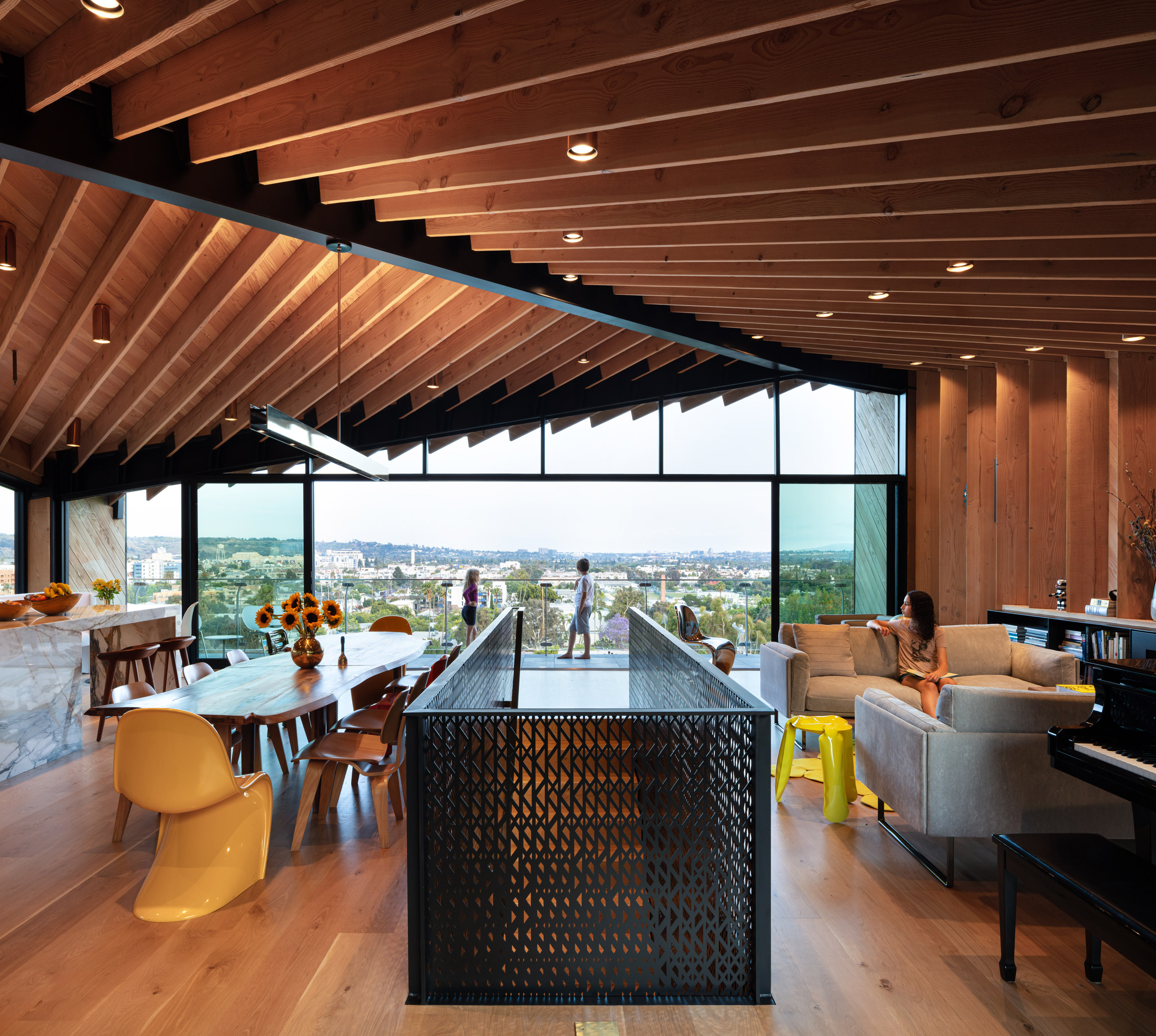 An existing home on the site was removed, along with dense vegetation that had taken hold over the years. “Once the site was cleared, the view revealed itself and it became clear that the design needed to respond directly to and highlight the spectacular scenery of the vast urban landscape below.”

From the street, the building appears to be only two stories tall, matching the height of its neighbours. It is composed of an angular volume covered in black zinc panels that sits above a low-slung sand-blasted concrete level punctuated by a garage door and the entrance. 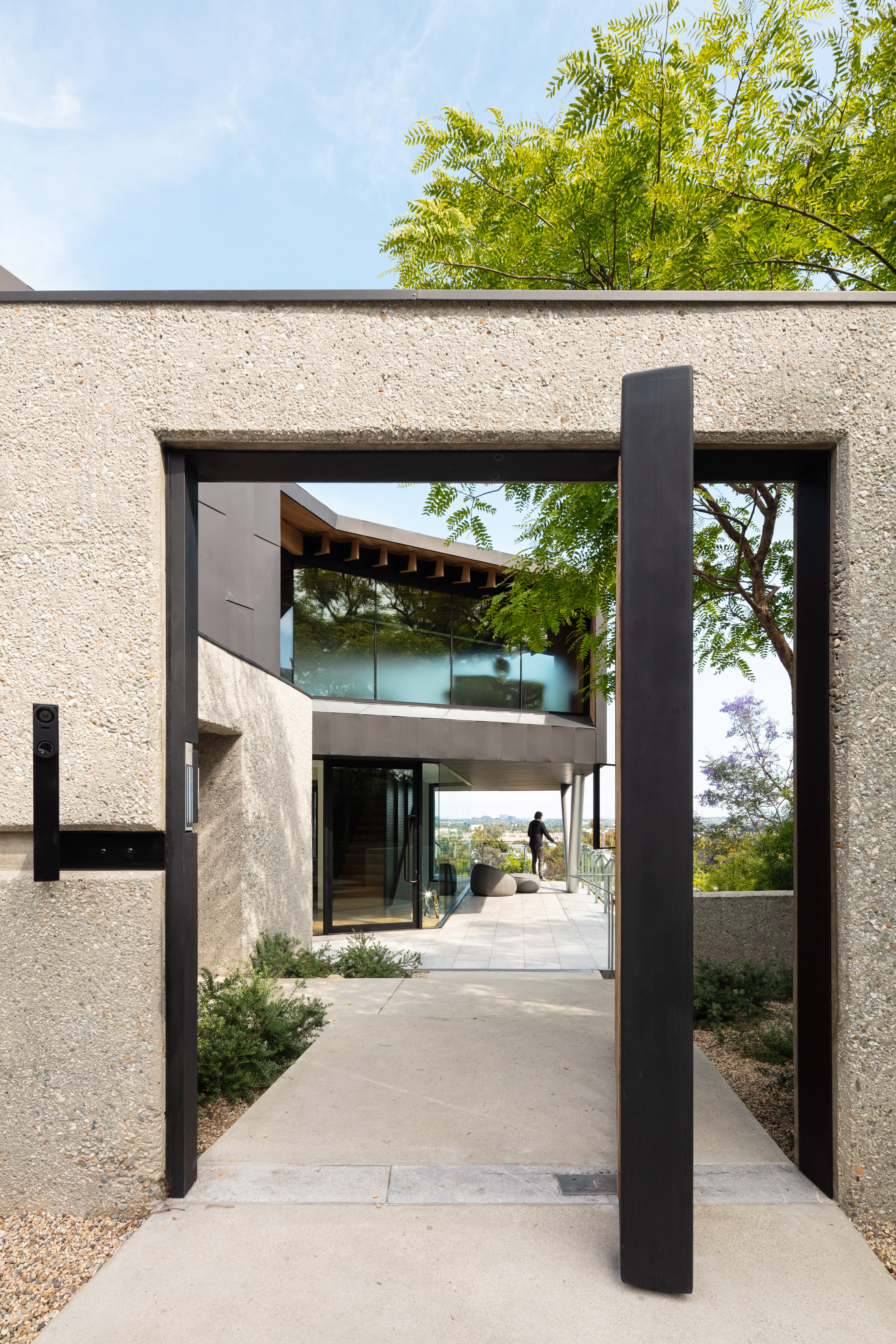 The top level is punctuated by a large terrace at the rear of the house. It partially cantilevers out to rest on stilts and provide cover to another outdoor space below.

“An inspiration for the house was the iconic modern homes of Los Angeles that seem to float above the city like spaceships on stilts, perched within the backbone of hills that shape the LA Basin,” said the firm. 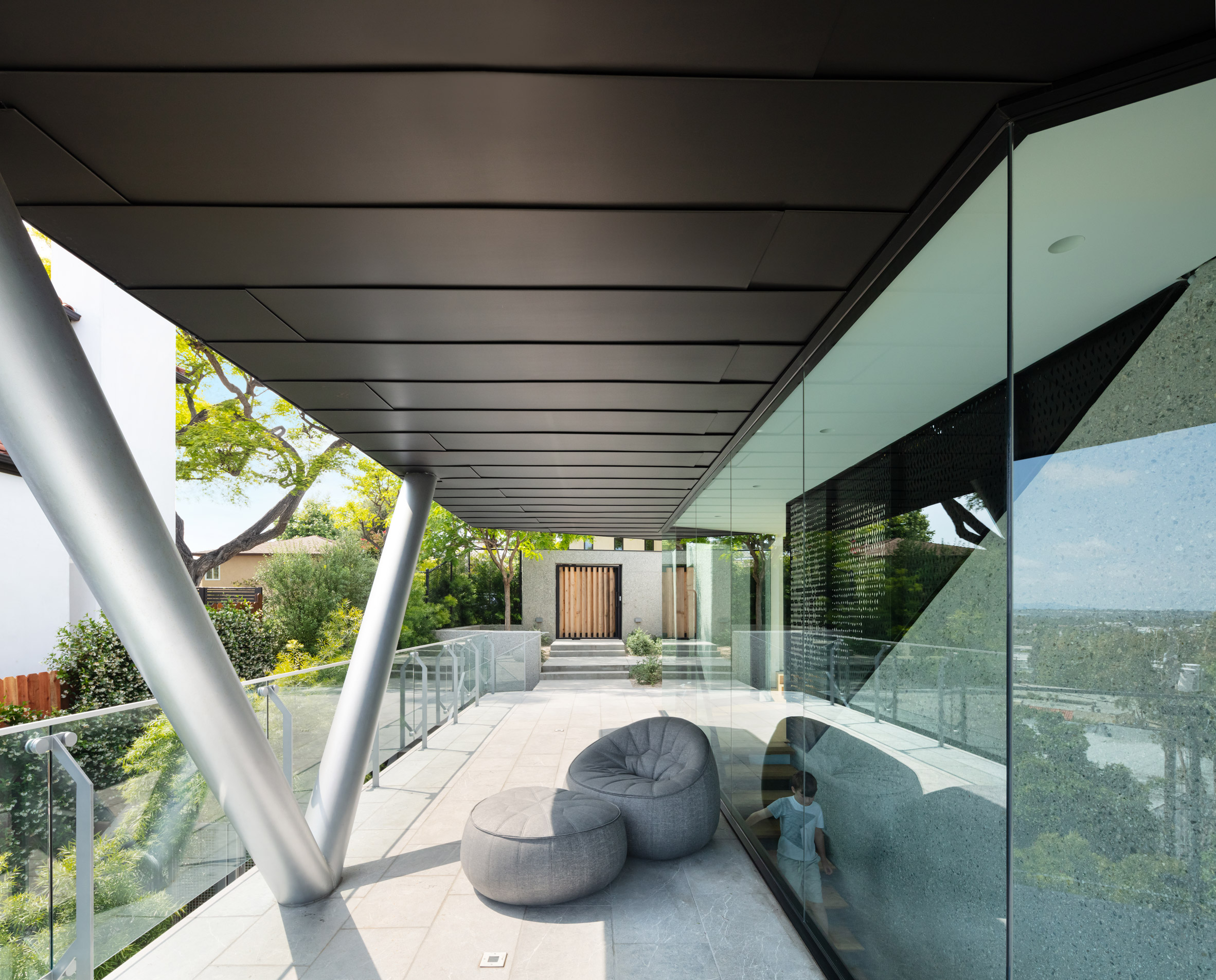 Because of the site’s slope, there is actually a third floor below the first two seen from the street. “The separate levels address the varying needs of the family, as both children and adults have their own territories but can come together for social, recreational and dining needs,” the architect said.

An entrance path goes around the middle level of the home. This route is covered by elements of the upper story, which rests on slanted columns with a metallic finish. It culminates at the wraparound terrace with eastern and southern exposures.

Visitors enter the home into the landing of a wooden staircase framed by black panels etched with a geometric, triangulated pattern. It leads up to the communal area or down to the lower level.

At the top of the stairs, the main living area is contained within a tall, faceted space accentuated by sand-blasted douglas fir beams that form the walls and ceiling. 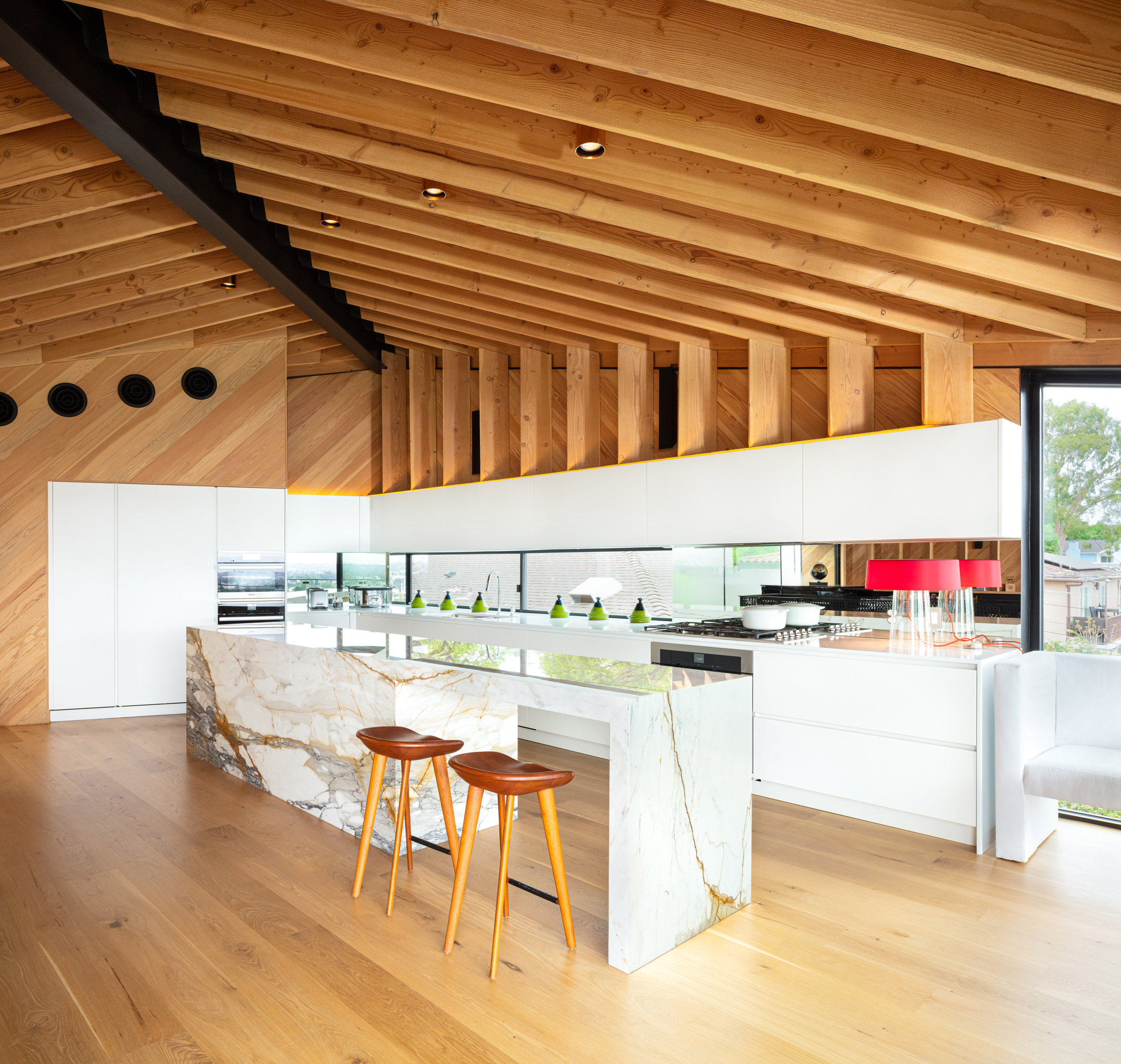 “The living floor is open on its south side and expressed as a large beamed attic space formed entirely in wood,” said Clive Wilkinson Architects. “Kitchen, dining and living all co-exist, orienting to the south view,” the statement continued.

The kitchen runs along one wall of the space and is delineated by an island clad in a richly veined stone, with a breakfast nook at one end. A long dining table with wavy edges is located nearby, for easier access during meals. 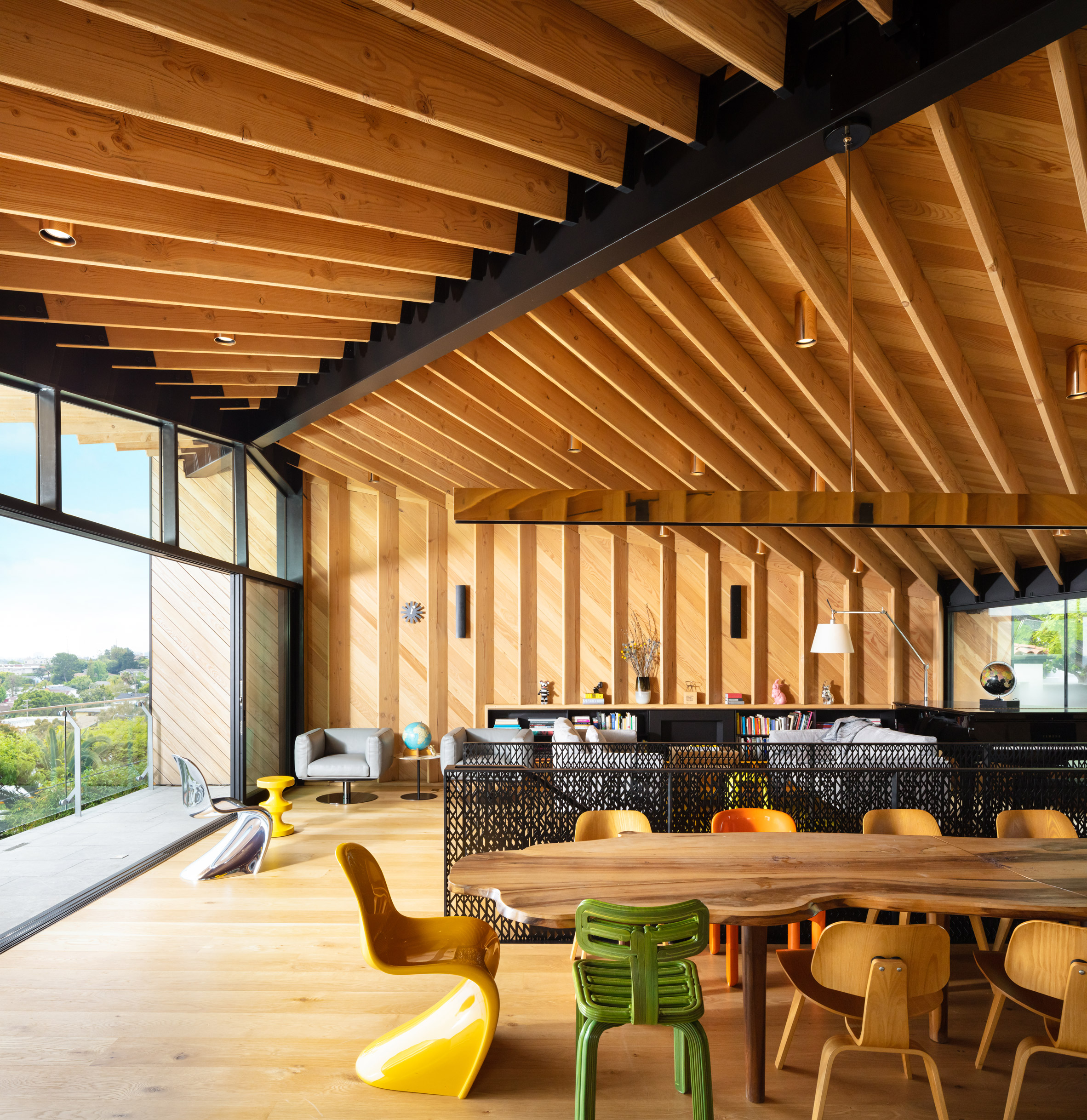 The staircase separates these areas from the living space, which is laid out with several couches and a grand piano.

The study placed to face the street shares a similar language with the communal space but is separated for more privacy. Its windows tilt downwards, providing glimpses of the road below.

At the middle level are Wilkinson’s bedroom suite and a guest bedroom. The master bedroom opens onto a terrace with views of the city. 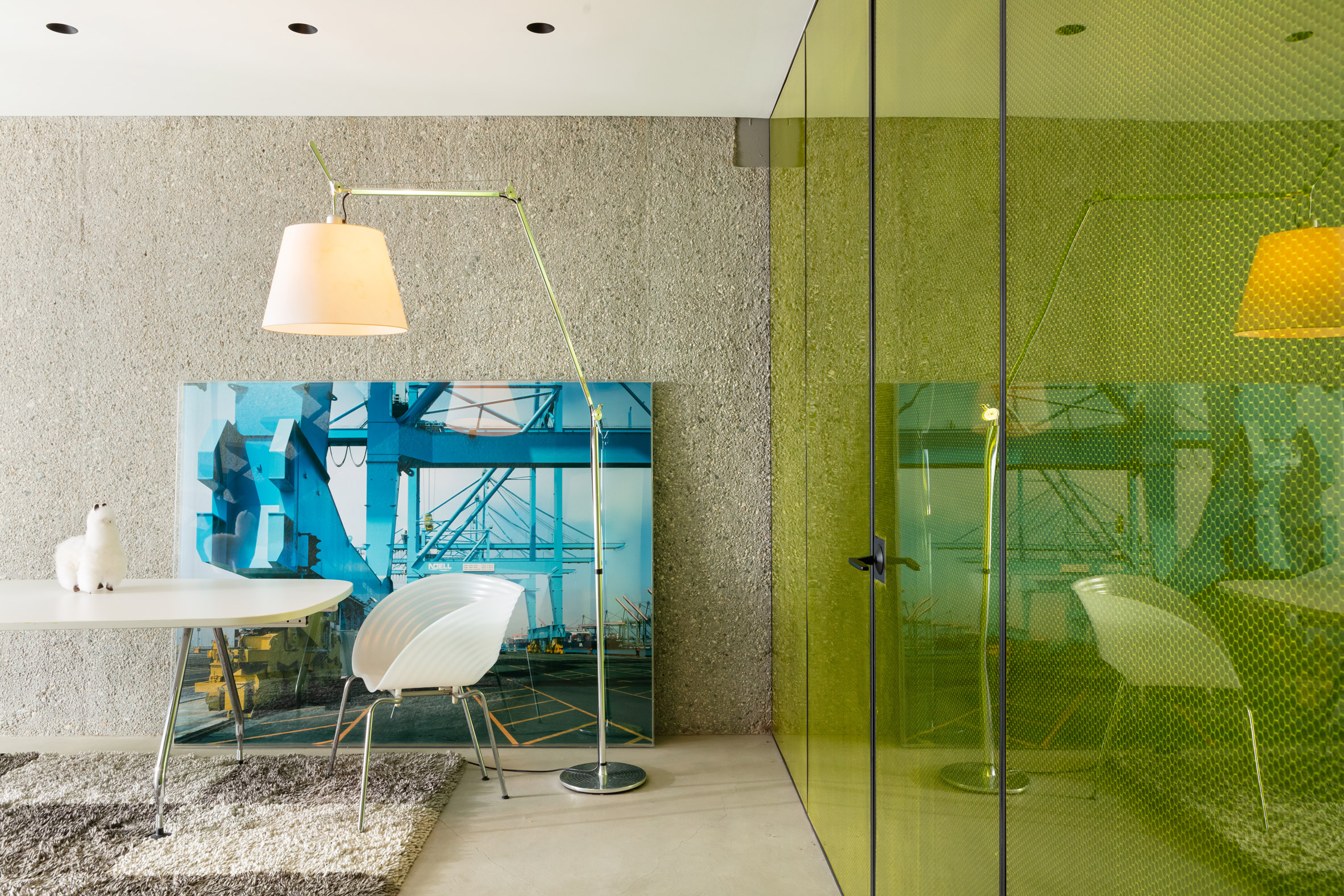 The lower level contains three children’s bedrooms, a home gym, and a recreation area for the kids. The den opens out onto the backyard pool via a large sliding glass door. “The children’s rooms open onto the stone-tiled infinity pool terrace and garden, which extends down the hill,” said Clive Wilkinson Architects.

The two lower storeys are wrapped in sand-blasted concrete, which helps insulate the home and provide thermal mass, thereby reducing the need for heating and cooling. “The exterior of the top floor volume is clad in black zinc panels, emphasising its role as the crow’s nest, or observatory, of the house.” 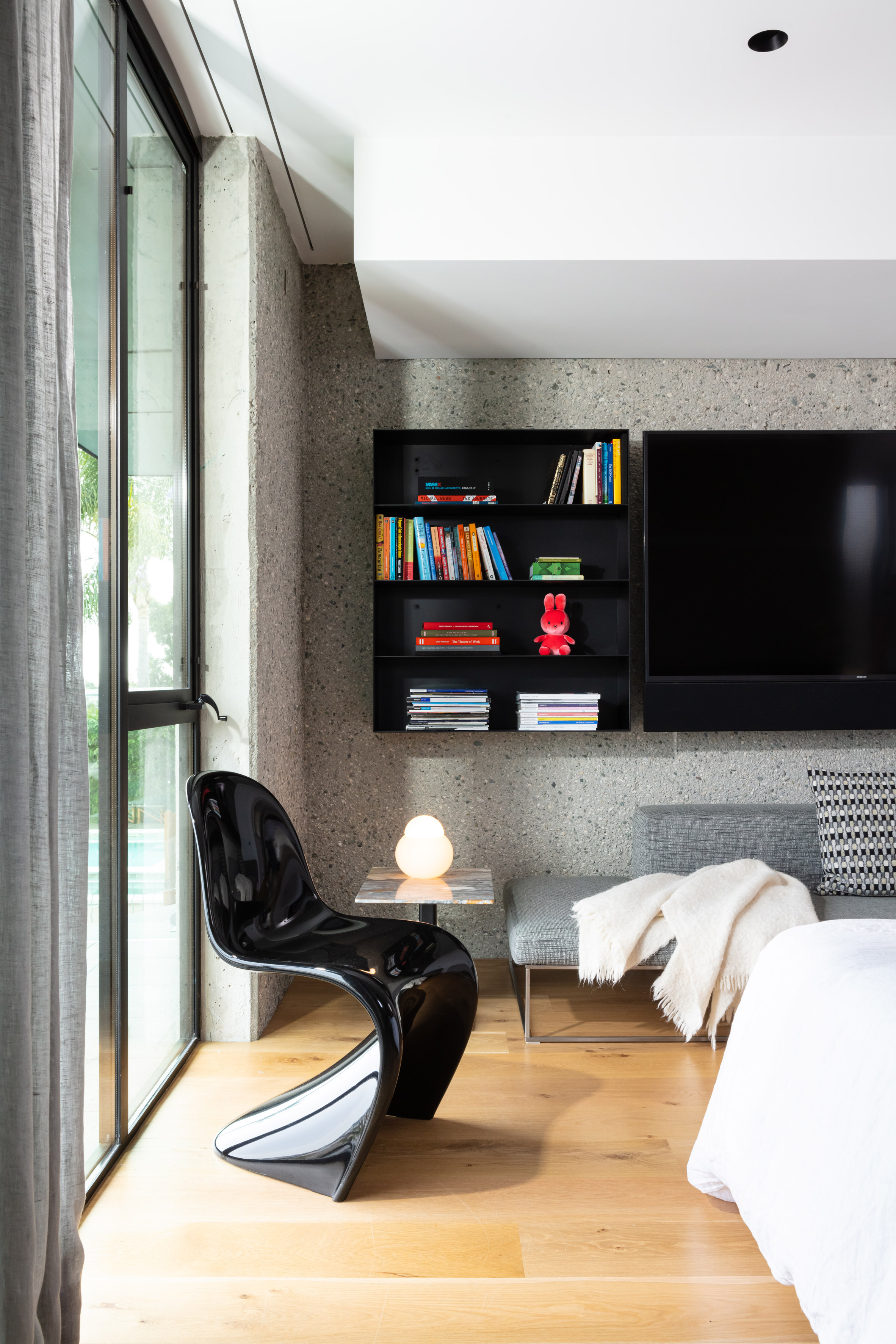 Clive Wilkinson founded his eponymous firm in 1991. It has completed several other projects throughout Los Angeles, including a media centre for Santa Monica College , and the offices of video production studio Funny or Die , in West Hollywood.

Further afield, the studio has built new offices for Microsoft’s growing presence in Vancouver , as well as the Manhattan interiors for advertising agency Publicis , which were designed to replace cubicles with comfortable nooks and shared workspaces.

Photography is by Ema Peter .