Architecture office Arquitectura-G has slotted a new house within the aged stone walls of a ruin in the medieval village of Palau-Sator, Spain.

The plot in the centre of the village in the Empordà region near Girona previously contained a stone house that had deteriorated into a state of ruin. 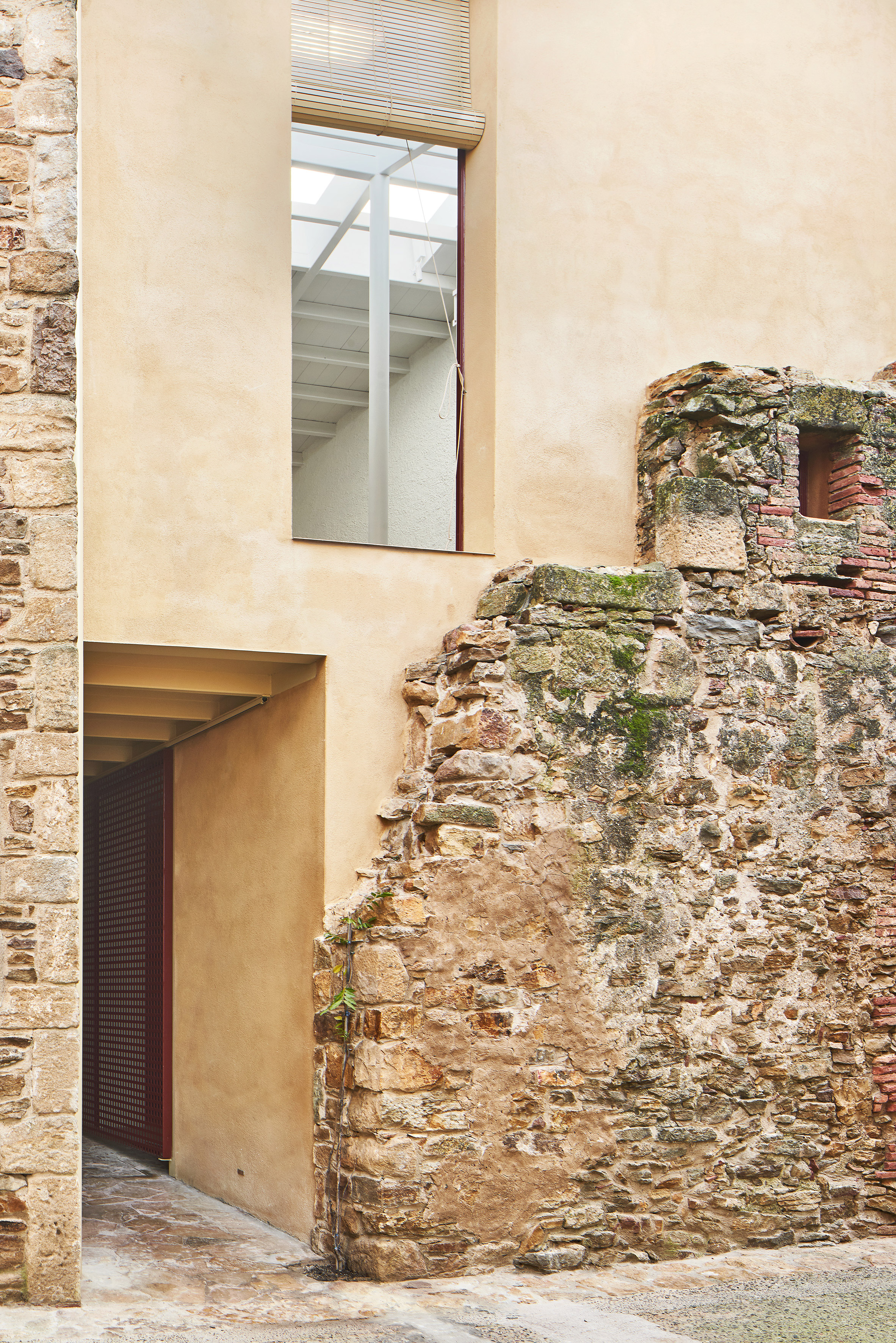 Barcelona-based office Arquitectura-G revived the site while respecting its sensitive historic context. The new building, called Single Family House, is erected inside the existing walls, which were preserved as they were found.

The plot is enclosed on either side by party walls. It is separated at street level from one of its neighbours by a small passageway that connects a main thoroughfare with the medieval town hall situated directly behind the house. 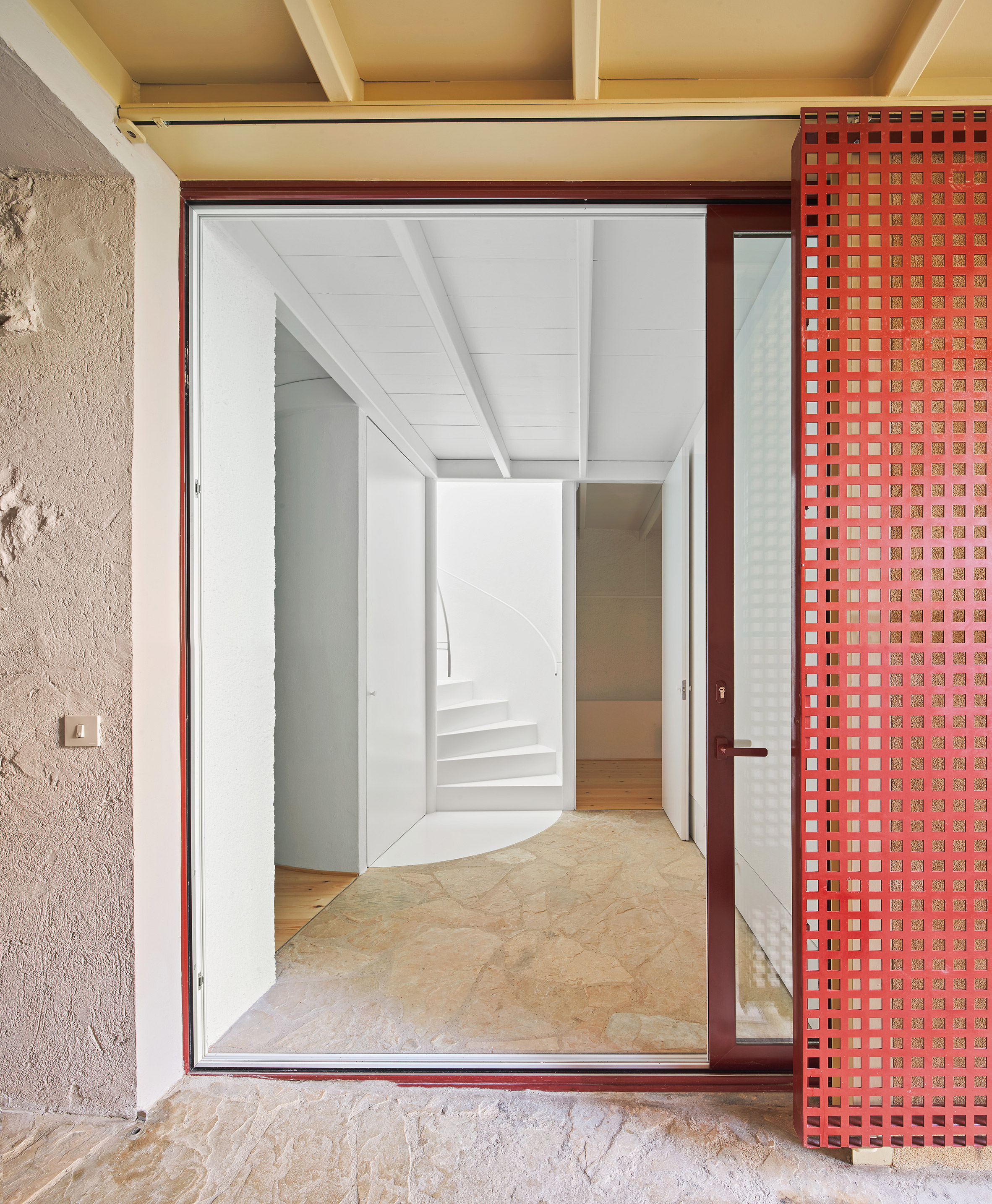 This open-air public throughway accommodates the house’s main entrance and also provides a covered area for storing firewood or parking a bicycle.

A sliding screen made from red perforated steel can be closed over to protect the property’s entrance. A glazed sliding door behind the screen opens onto a space with the same stone paving as the passageway, which minimises the threshold between indoors and outdoors. 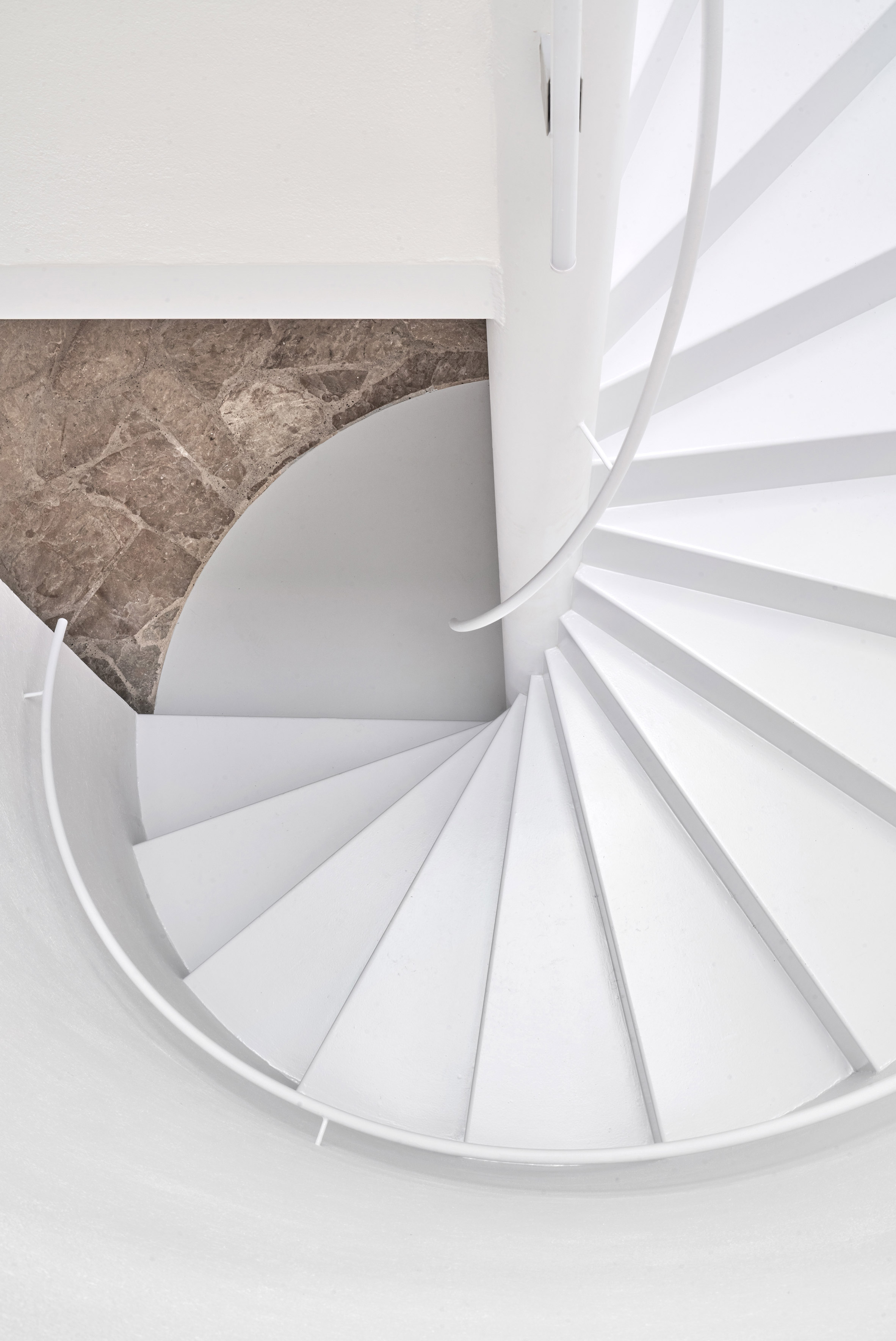 On the ground floor, bedrooms and a toilet are positioned on either side of the central hall. One of the bedrooms houses simple wooden bunk beds and features a window with a stepped edge that looks onto the medieval wall.

The master bedroom on the opposite side of the entrance has a level change leading to a dressing area and incorporates an opening aligned with a doorway in the original stone wall. 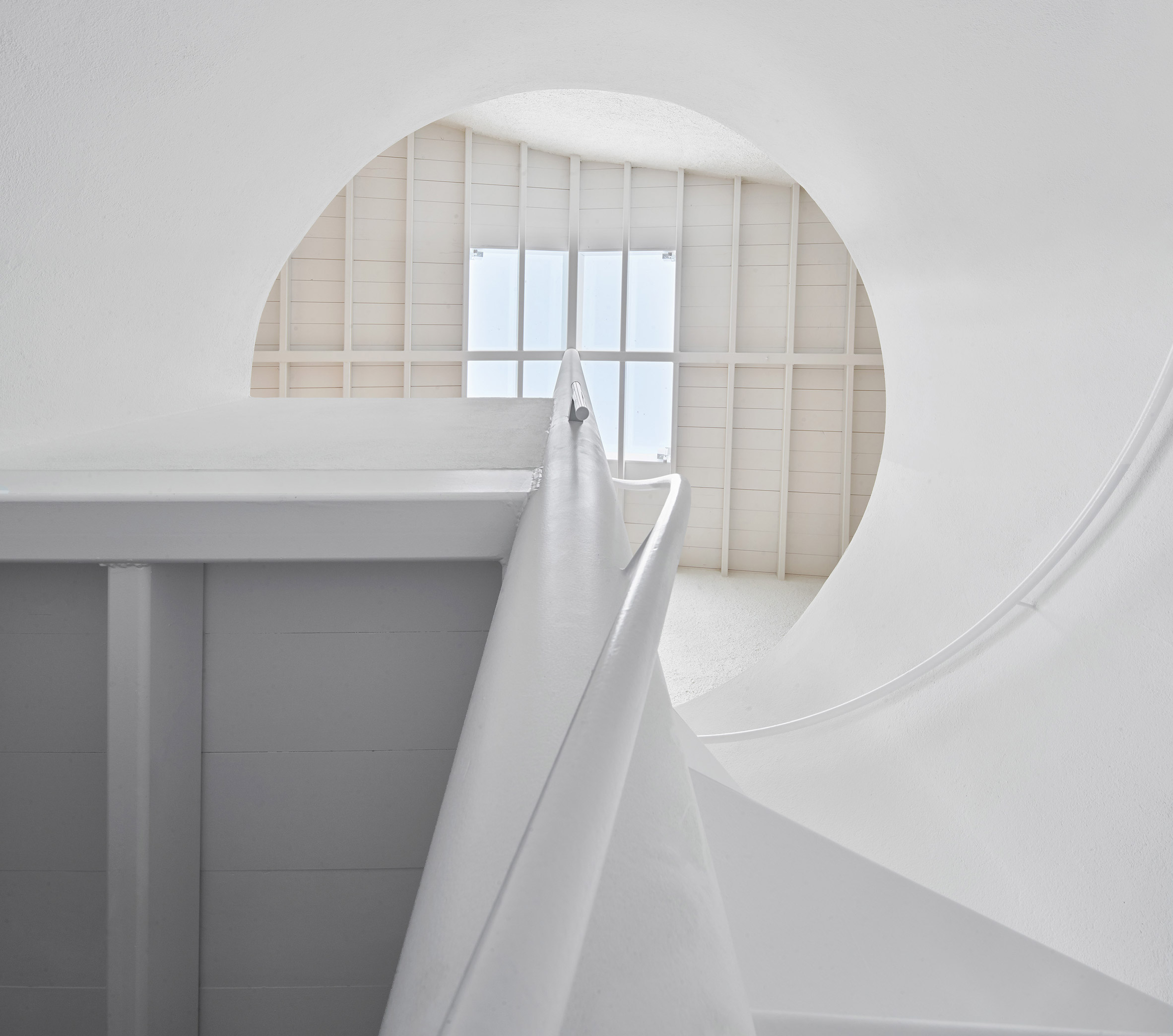 This central hall also contains a spiral staircase leading to the first floor. The staircase’s central support column extends all the way to the apex of the building’s pitched roof.

The ceiling height on the ground floor is kept low so only a short stair is required. This also maximises the internal volume of the open-plan living areas on the upper level. 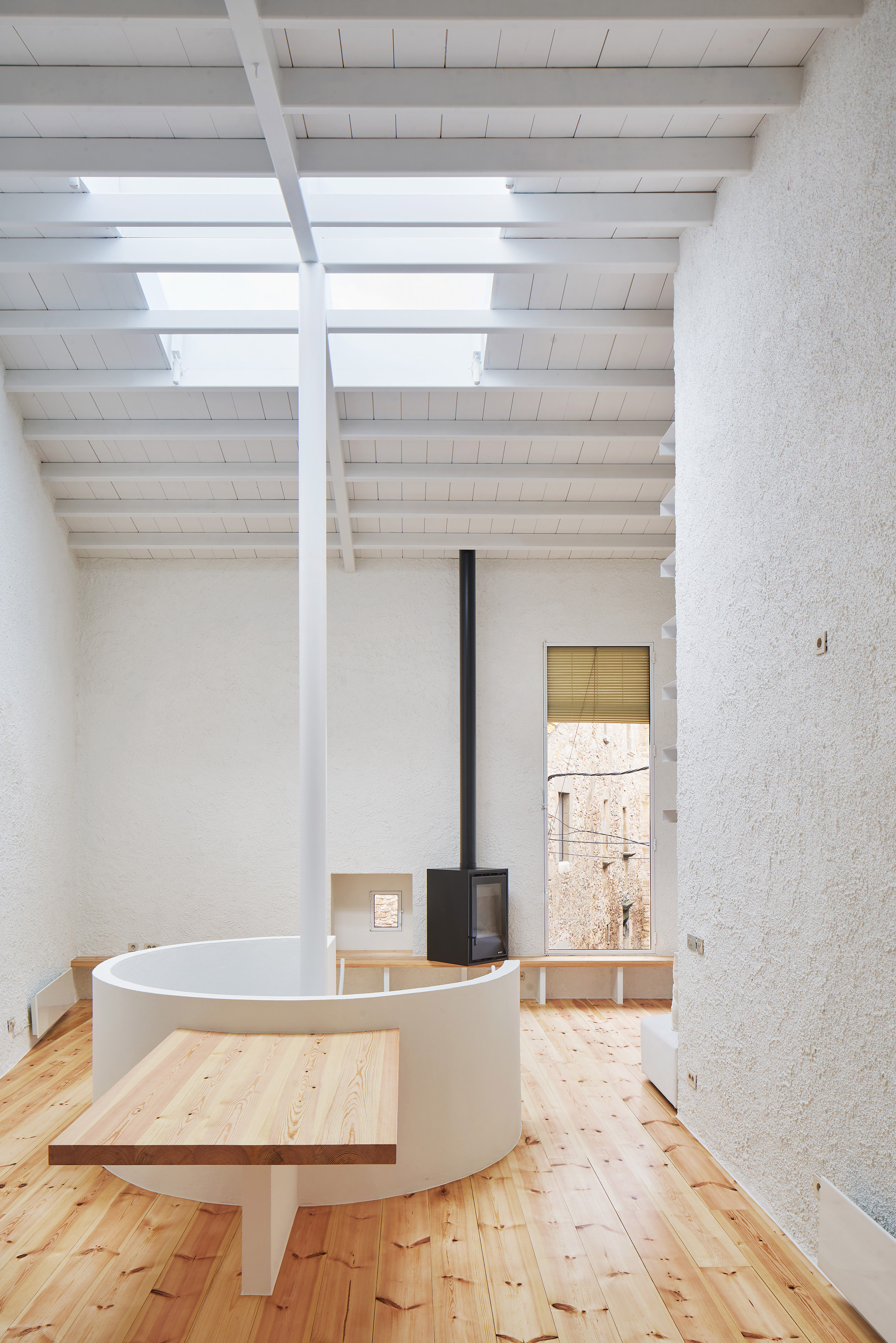 Two large windows on either side of the space look out towards the medieval wall and the nearby Montgrí mountain, while an opening in the roof frames a portion of the sky.

A kitchen and dining space is positioned on one side of the central staircase, with the table abutting the curved edge of the stairwell. 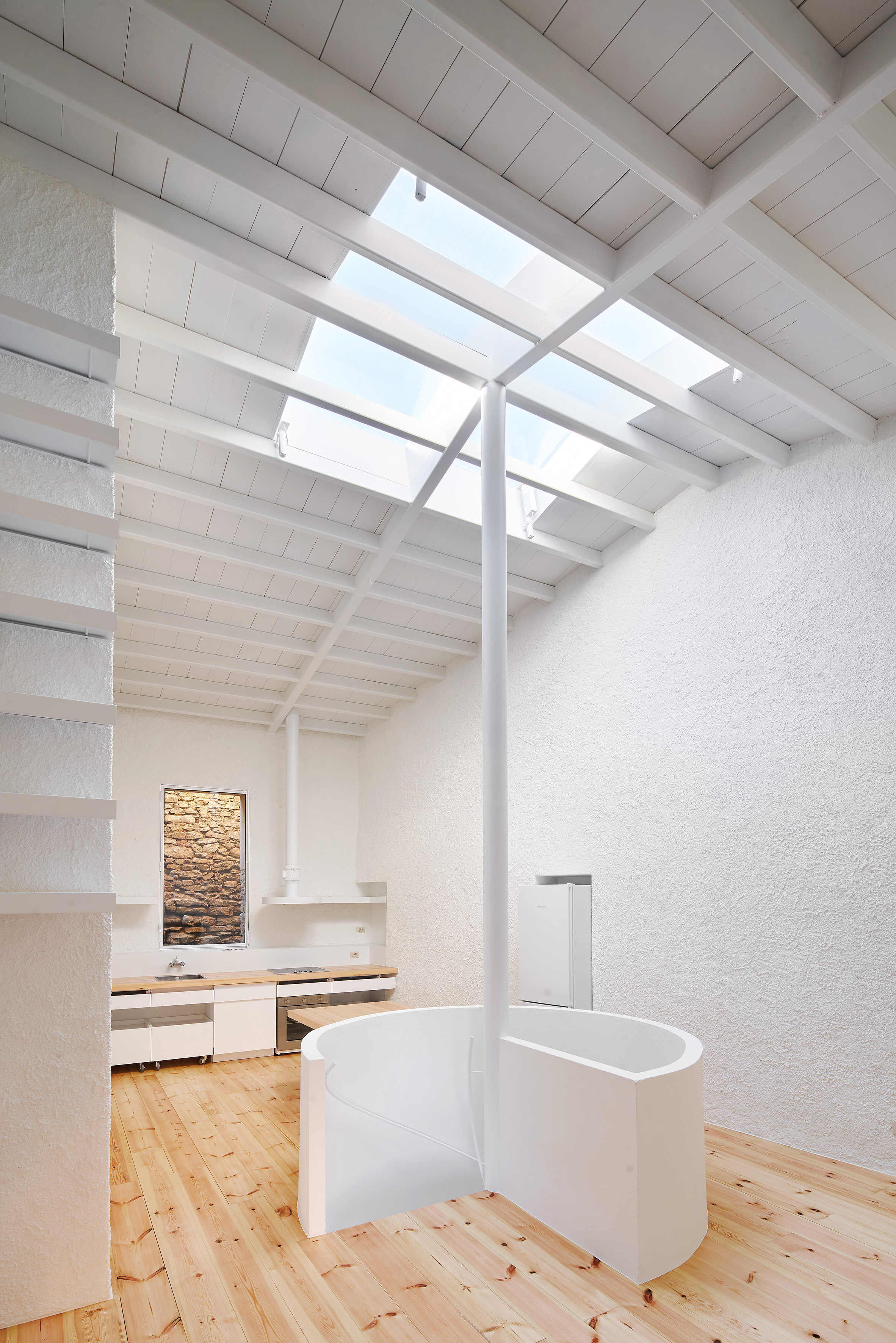 The sitting area built into a corner of the room faces a fireplace perched on a bench that extends along the edge of the space.

A minimal material palette for the interior is dominated by knotted wooden floorboards and whitewashed surfaces that enhance the brightness of the spaces. 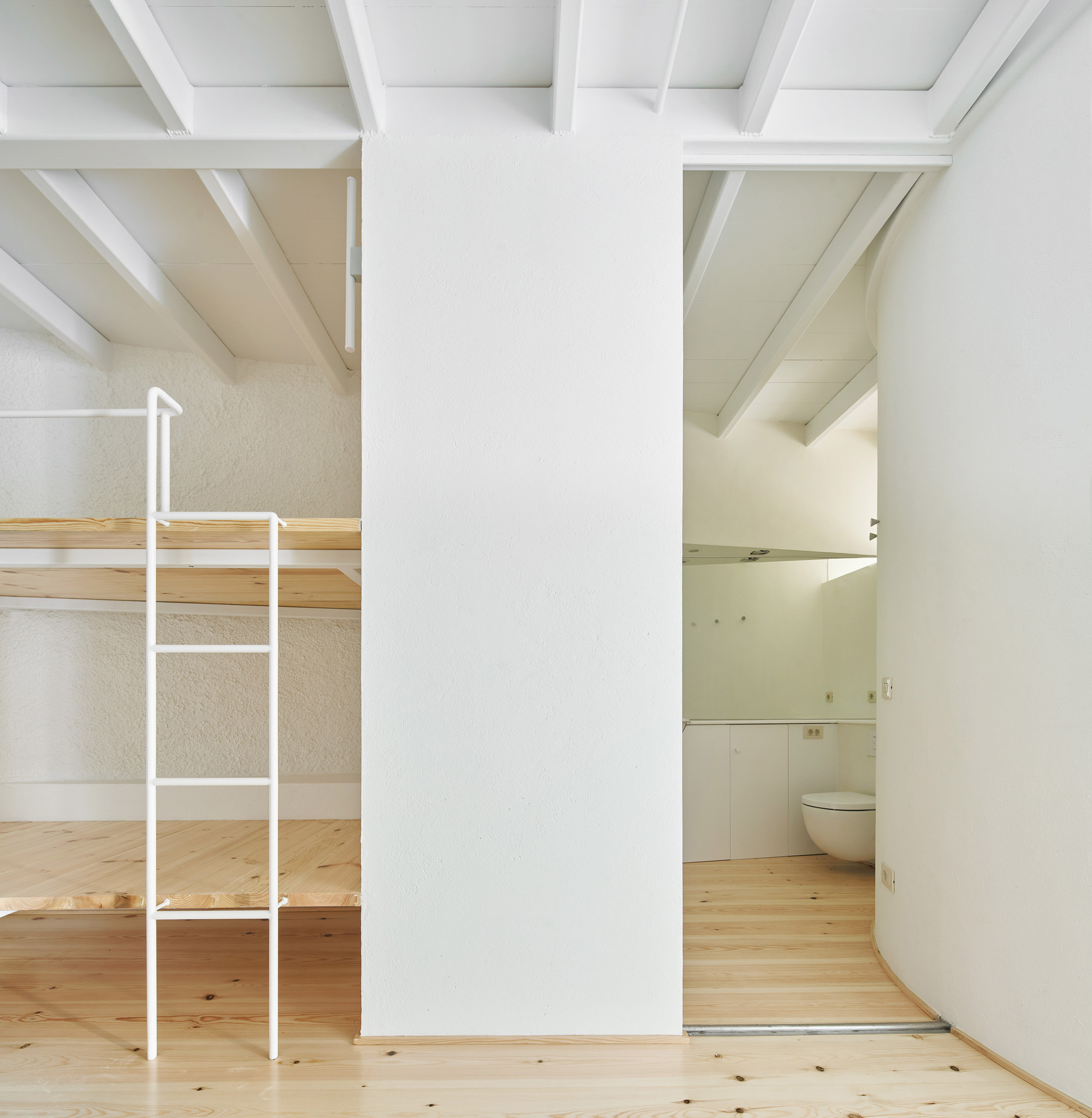 Arquitectura-G’s previous renovation projects include the transformation of a farmhouse into a family home featuring a tile-covered kitchen and secluded swimming pool.

Photography is by José Hevia.