Bernard Khoury gives Beirut’s B018 nightclub an even darker upgrade 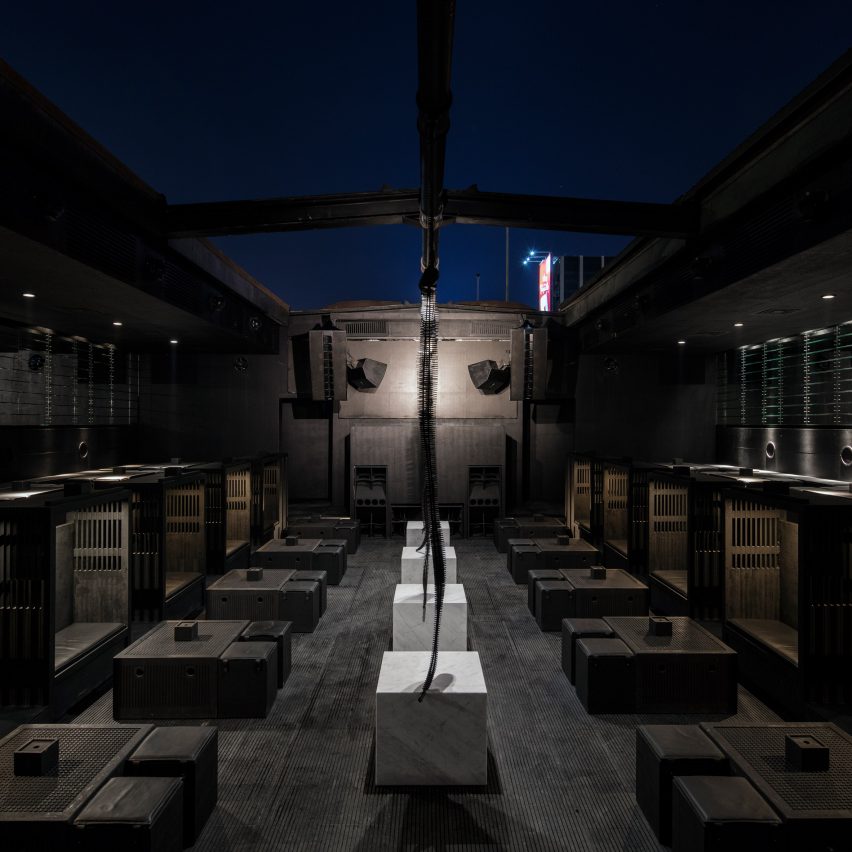 Khoury gained notoriety for his war-infused designs when the nightclub first opened in 1998. Two decades later he’s returned to make it even darker, furnishing it with gothic elements that reference religious architecture and abattoirs.

B018 started out as an underground music night in the 1980s against the backdrop of the Lebanon War.

In the late-1990s Khoury built a permanent home for the club in the industrial Karantina district, the site of a horrific massacre of Palestinian muslims in 1976.

Sunk into the ground like a cross between a military bunker and a mass grave, B018 is covered by a huge circular metal plate roof that resembles a helicopter landing pad. 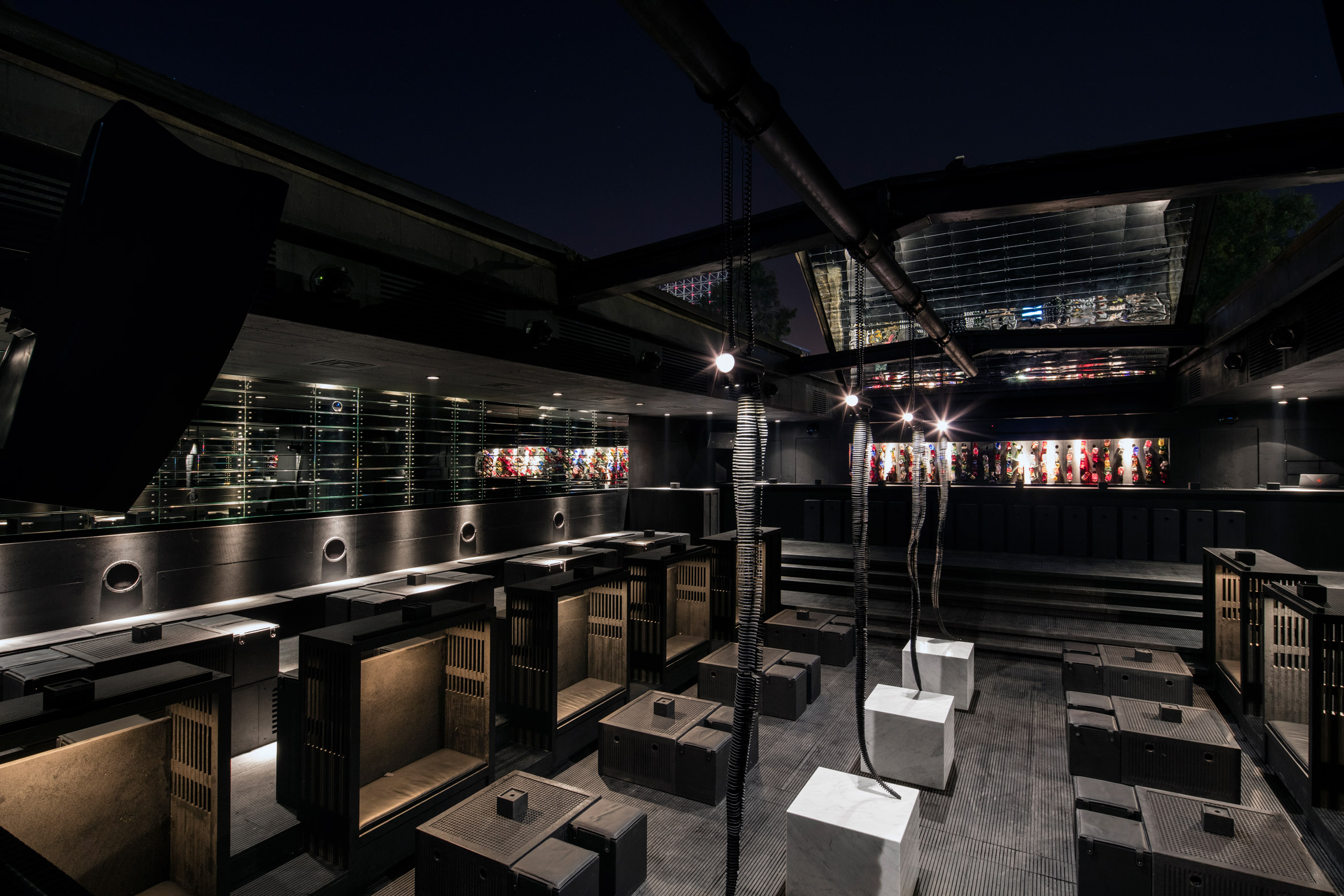 Most famously, this roof is retractable so clubbers can dance underground yet beneath the open night sky.

“B018 had in its initial setup a very symmetrical plan, reminiscent of religious architecture in many ways,” Khoury told Dezeen.

“On the pavement floor, mahogany furniture was placed like musical instruments in a simple orthogonal formation.” 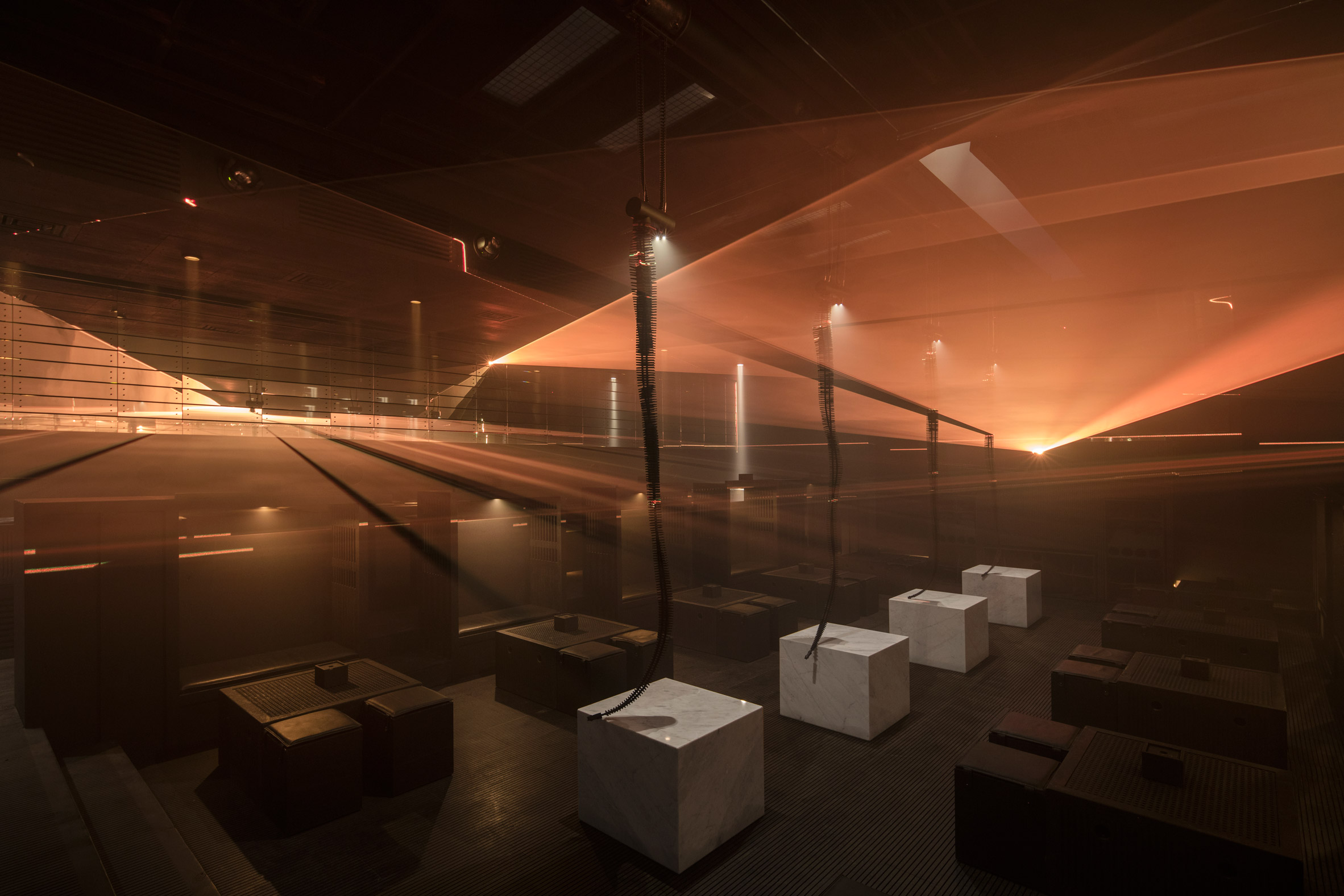 Khoury only designed the club to last five years. Now he has given it a complete overhaul, replacing the original wooden furniture with stone booths and podiums.

“The new interior is entirely built with solid stone. Walls, floors, ceilings, furniture are all finished in stone, in complete opposition to the initial take on B018,” he said

“B018 is now more than 20 years of age. We consider it permanent. The choice of stone was driven by this issue of permanence.” 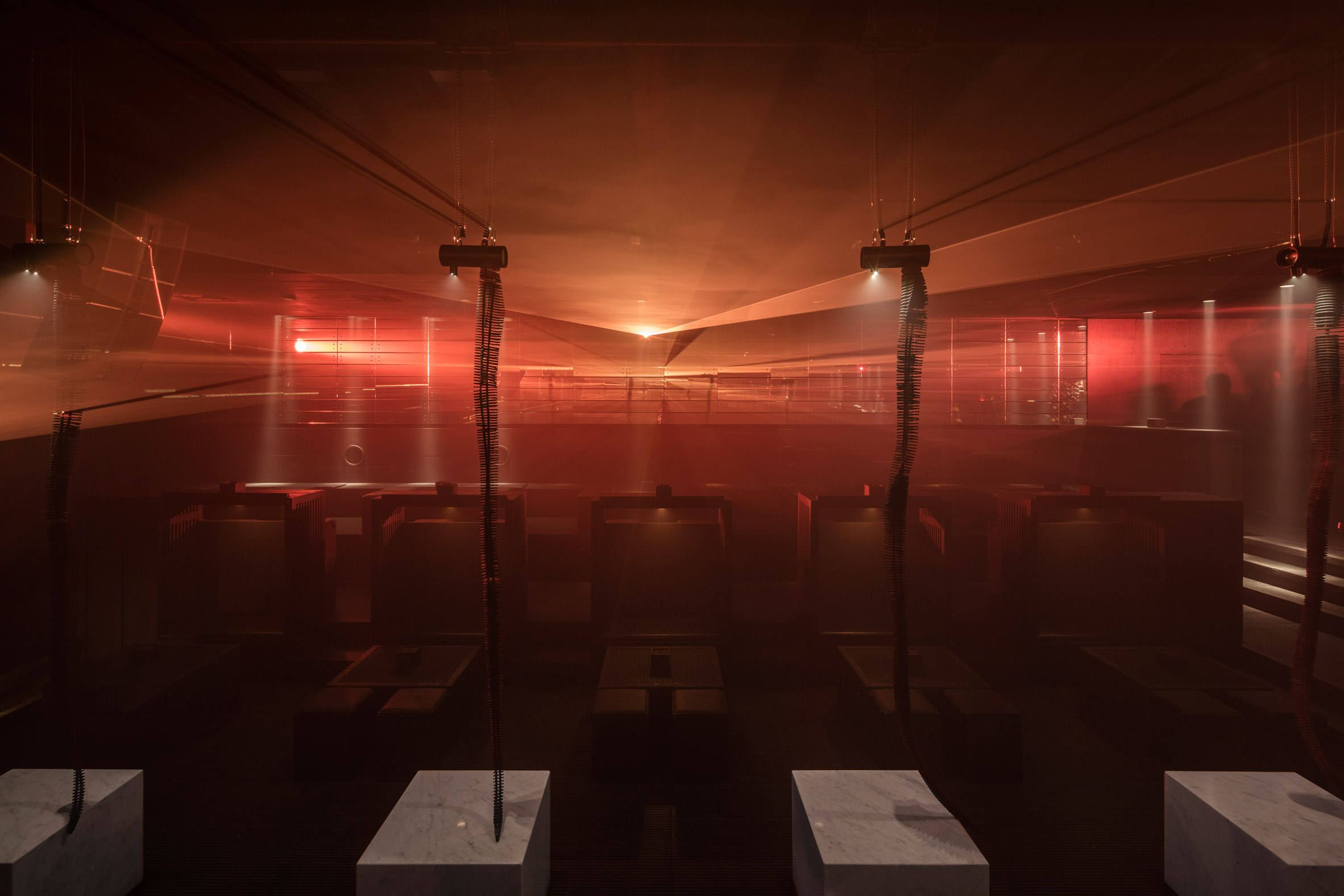 In its previous iteration B018 was sparsely decorated, but in the redesign Khoury has added the macabre detail of a row of skeletal metal rods that hang from the centre of the nightclub like carcasses in an abattoir.

“The hanging ‘spines’ are lighting fixtures,” he explained. “They also serve as dancing companions for the uninhibited.” 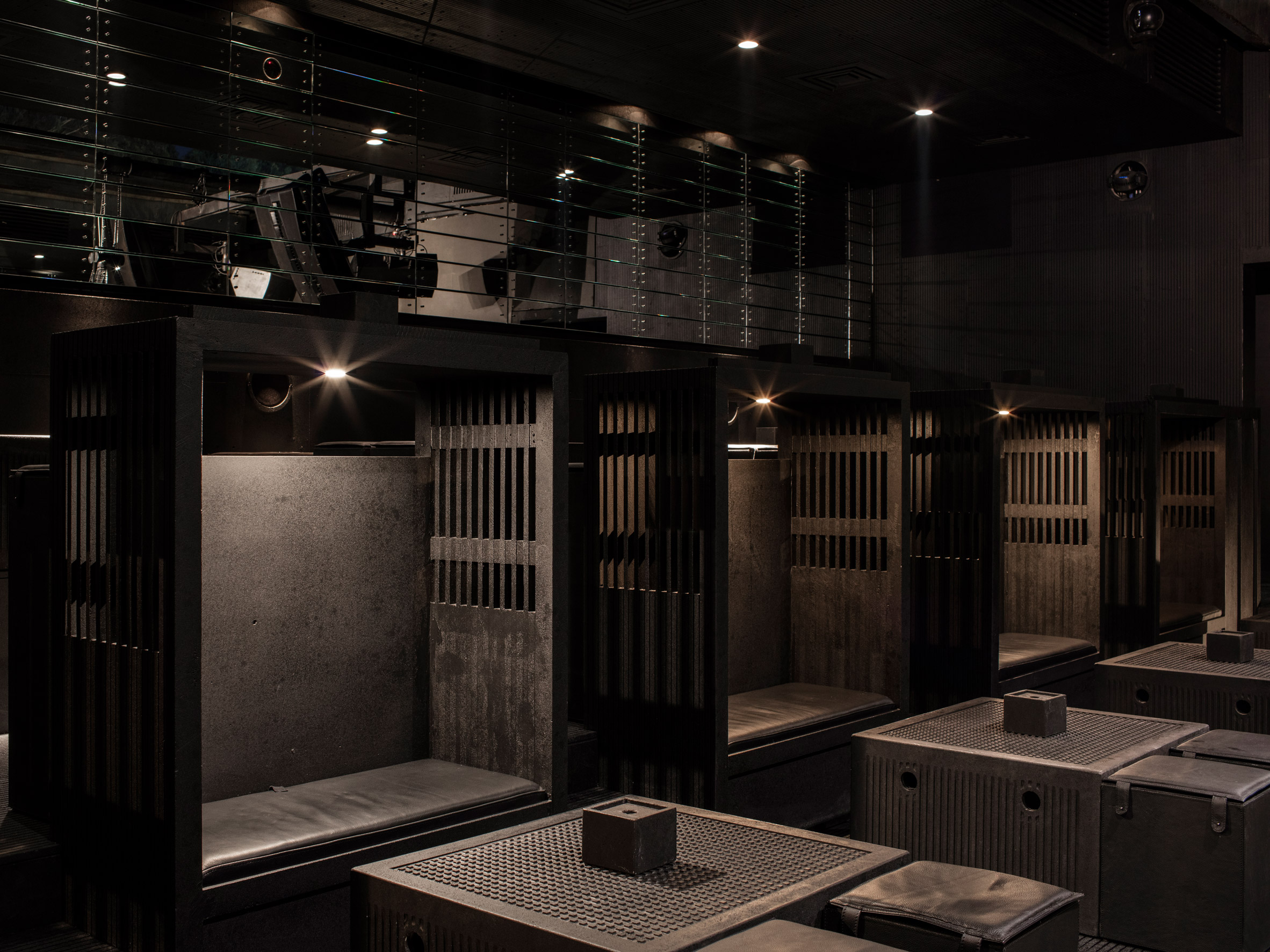 Khoury designed the booths to maintain the connection with religious architecture. On one side people can sit in their alcoves, whilst the tops serve as an altar-like bar for the people behind them.

Grills carved into the stone add visual interest and give the leather-cushioned booths an industrial edge, whilst allowing occupants to spy on each other through the grating. 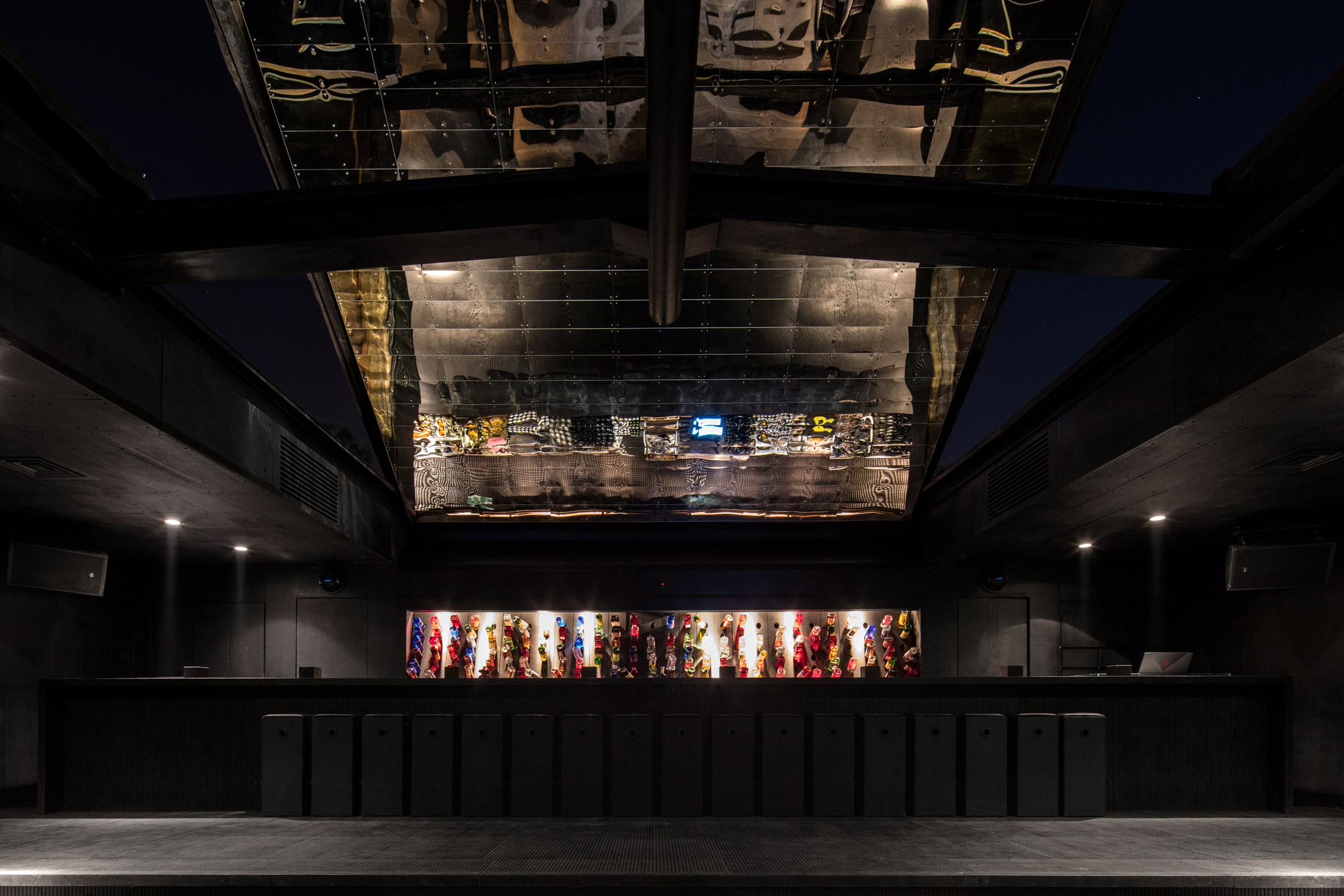 The roof still opens with a hinge located behind the bar. When closed, it’s underside is covered in rows of mirrored metal panels. Instead of shelves, the bar has a series of slots for bottles to rest in neck first, as if they were racks of weaponry.

Khoury’s infamous design for B018 has had a lasting influence on the architecture of Beirut. Last year Rabih Geha Architects used layers of perforated steel to create an industrial-style club on the waterfront where drinkers could observe each other through mesh partitions.

Fouad Samara Architects built an apartment block in Beirut with huge metal panels that can be pushed out and retracted to change the configuration of the rooms inside.

Photography is courtesy of Jukebox PR.

The post Bernard Khoury gives Beirut’s B018 nightclub an even darker upgrade appeared first on Dezeen.