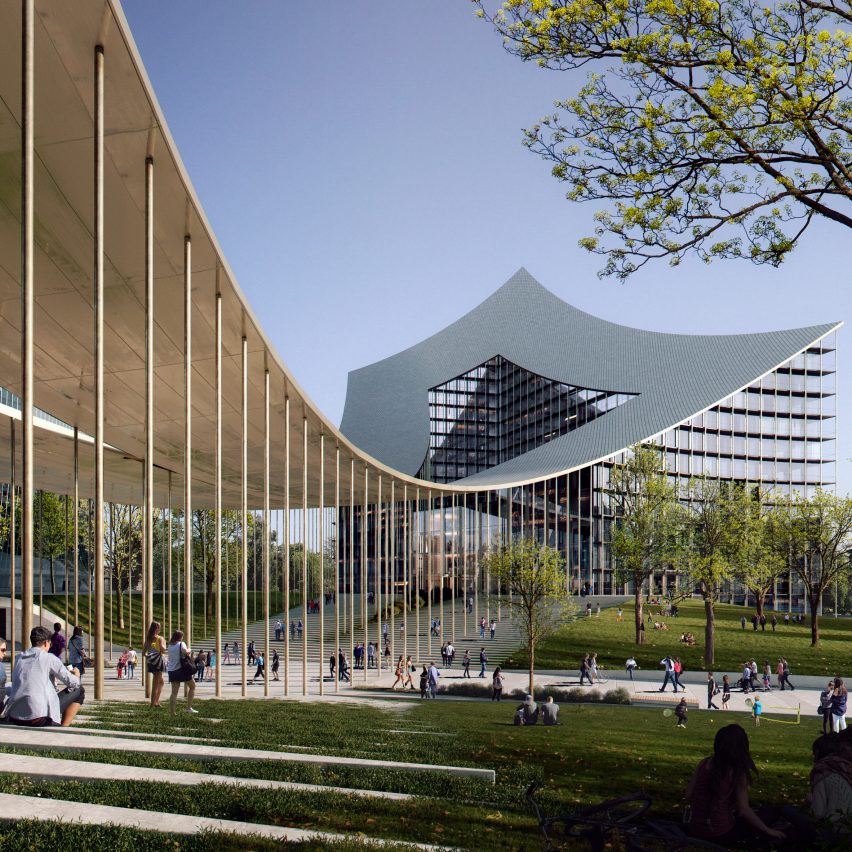 BIG has unveiled visuals of The Portico that will mark the entrance to CityLife, a district in Milan that has buildings designed by Zaha Hadid , Daniel Libeskind and Arata Isozaki .

Distinguished by its giant sweeping rooftop, The Portico will fill the final two plots of the residential and commercial development that is located on the site of the Italian city’s former trade fair grounds. 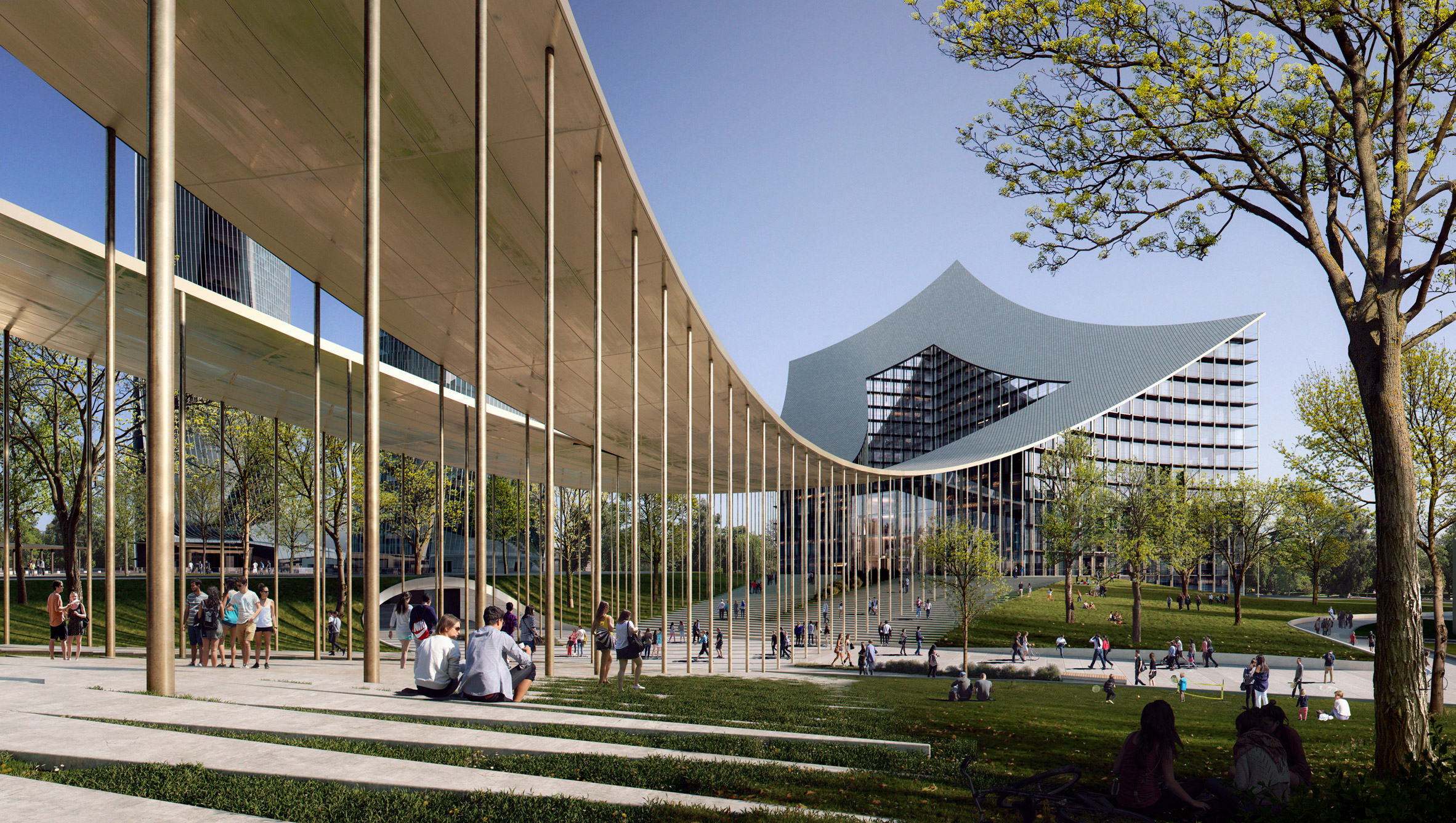 BIG was commissioned to design a fourth tower for CityLife , but instead proposed two small buildings joined by a giant, curved canopy that is designed to act as an “urban-scale portico”.

The architecture studio designed the building to provide the district with public space that will “complete” the development. 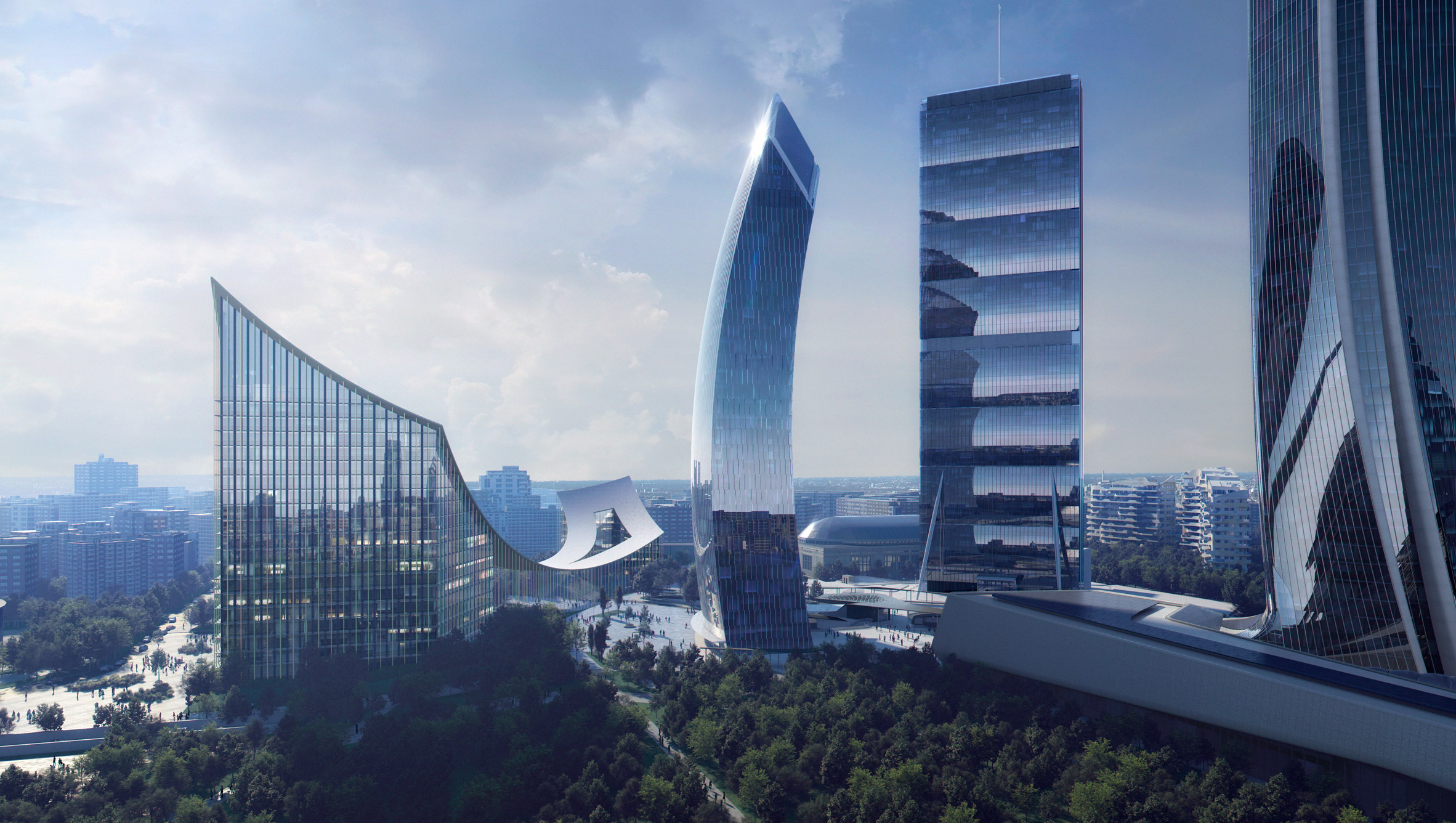 “The site forms a missing link between the three iconic towers in the City Life masterplan and the surrounding city,” explained Andreas Klok Pedersen, partner at BIG.

“Instead of creating a fourth tower on the site, we started quite early in the process to look into lower perimeter blocks that could become a more human-scale entrance into the area,” he told Dezeen.

“The resulting buildings are neither high rise or low rise, but a hybrid between the two. The canopy frames and completes the existing skyline rather than competing with it.” 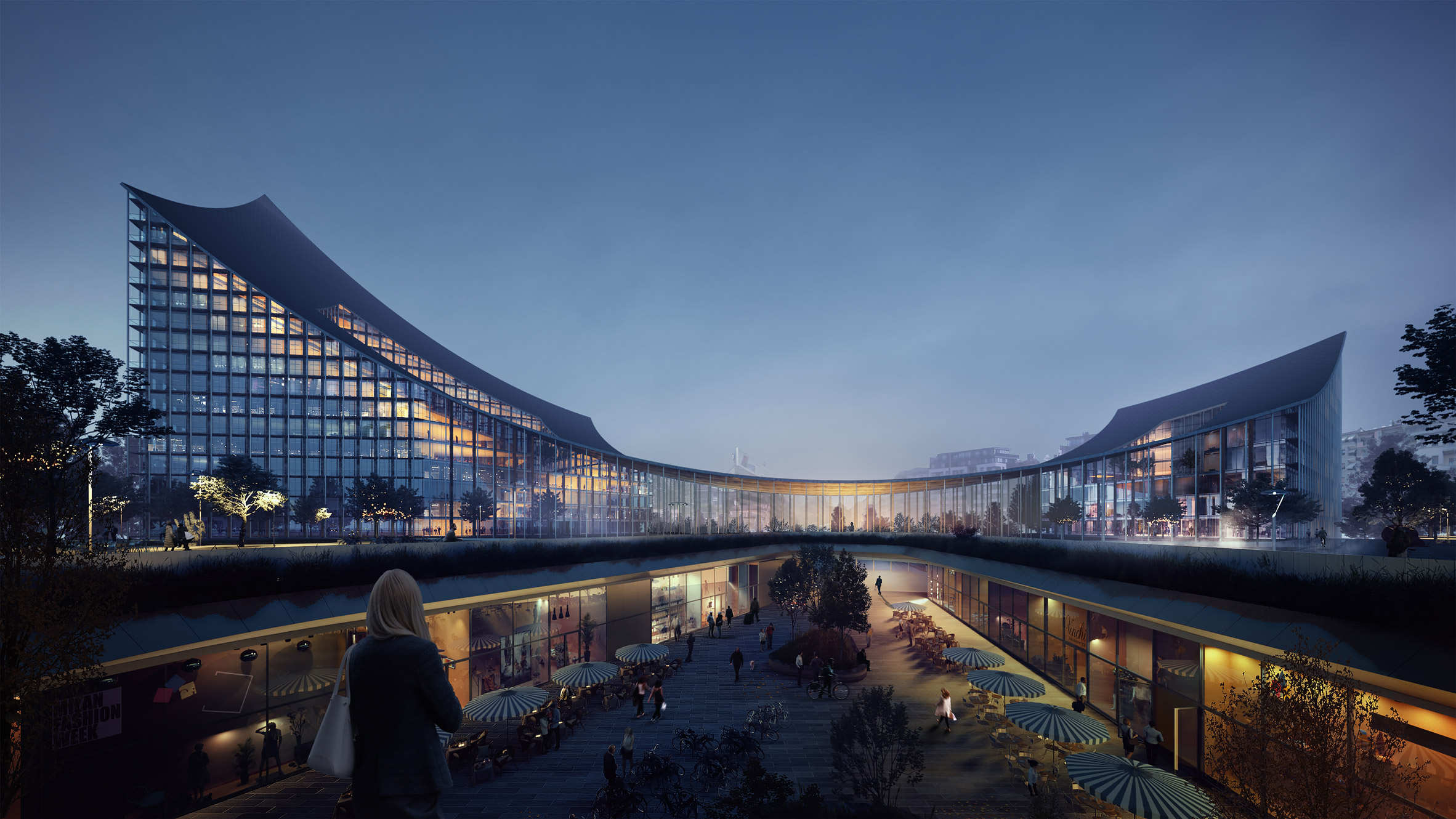 The site of The Portico is currently divided into two distinct plots by a large driveway and taxi rank that extends between them.

BIG’s proposal imagines the removal of this car ramp to transform the area into a pedestrian-friendly park that will become the social heart of the development. 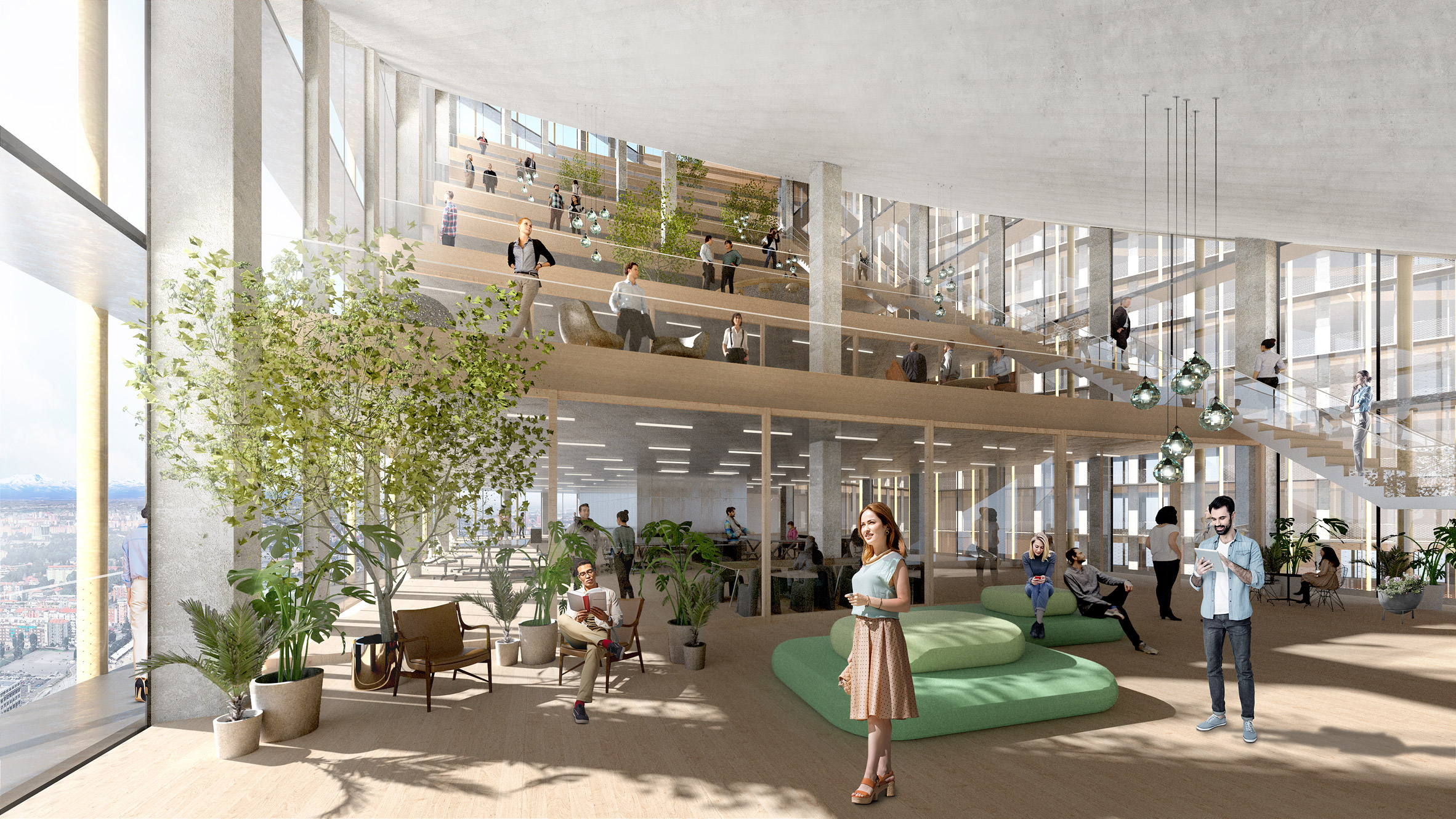 “By interconnecting the two towers with a catenary canopy between the two roofs, we were able to transform the existing space for car infrastructure into a covered, shaded and pedestrian public realm that invites people into CityLife,” explained Pedersen.

“And by continuing the curve of the canopy into the roofs, the two buildings reads as one composition – trimmed by one spherical geometry.” 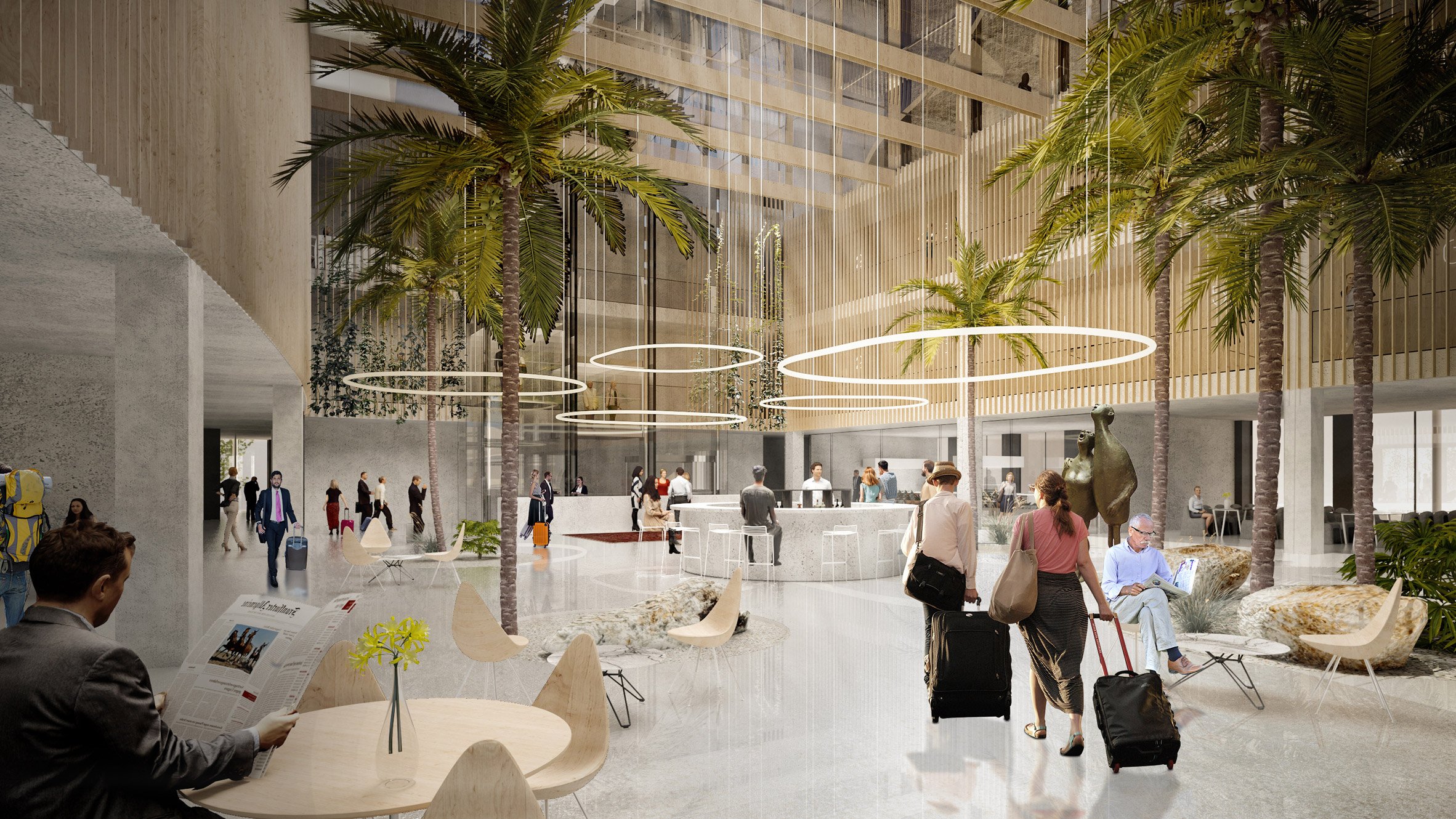 Once complete, The Portico’s curved canopy will span 140 meters between the two volumes, supported by a colonnade that act as tension rods to hold it down.

The underside of the canopy will be clad in a copper-alloy that would continue inside both buildings, which helps to blur the boundary between interior and exterior of the building.

There is also an ambition to cover the roof in photovoltaic solar shingles that would be “one of the largest integrated solar roofs in Europe”. 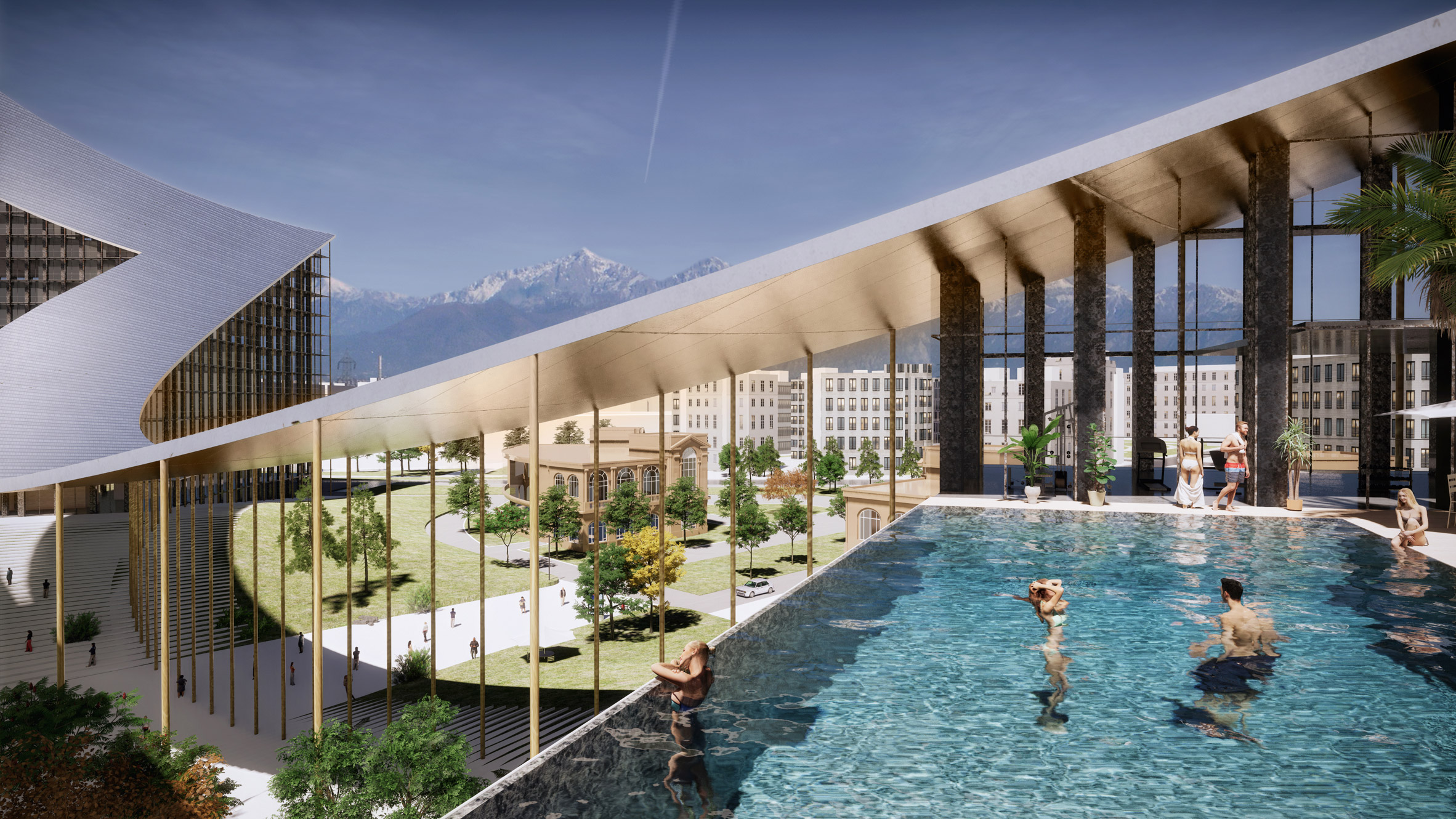 Publicly accessible facilities will spill out from the ground floor of each one. 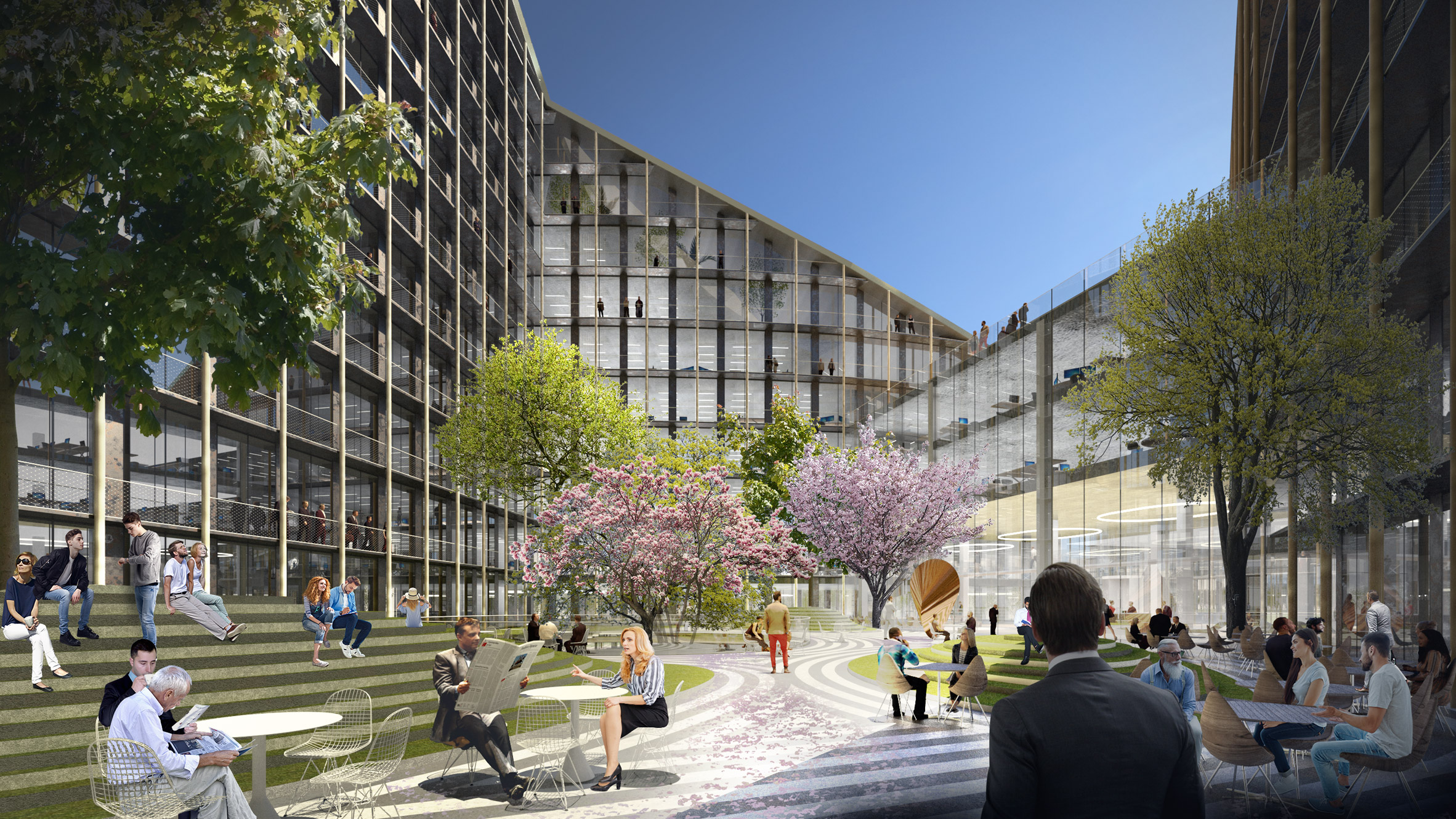 While the canopy will provide shaded, outdoor space for locals and visitors to the city, each building will also be complete with its own private courtyard.

Positioned at the centre of both blocks, these are designed to let natural daylight and ventilation into the the interiors and reduce dependence on artificial systems.

These courtyards will be filled with plants and trees that will be visible throughout the hotel and offices, forming a backdrop “lush greenery” to their pared-back interiors. 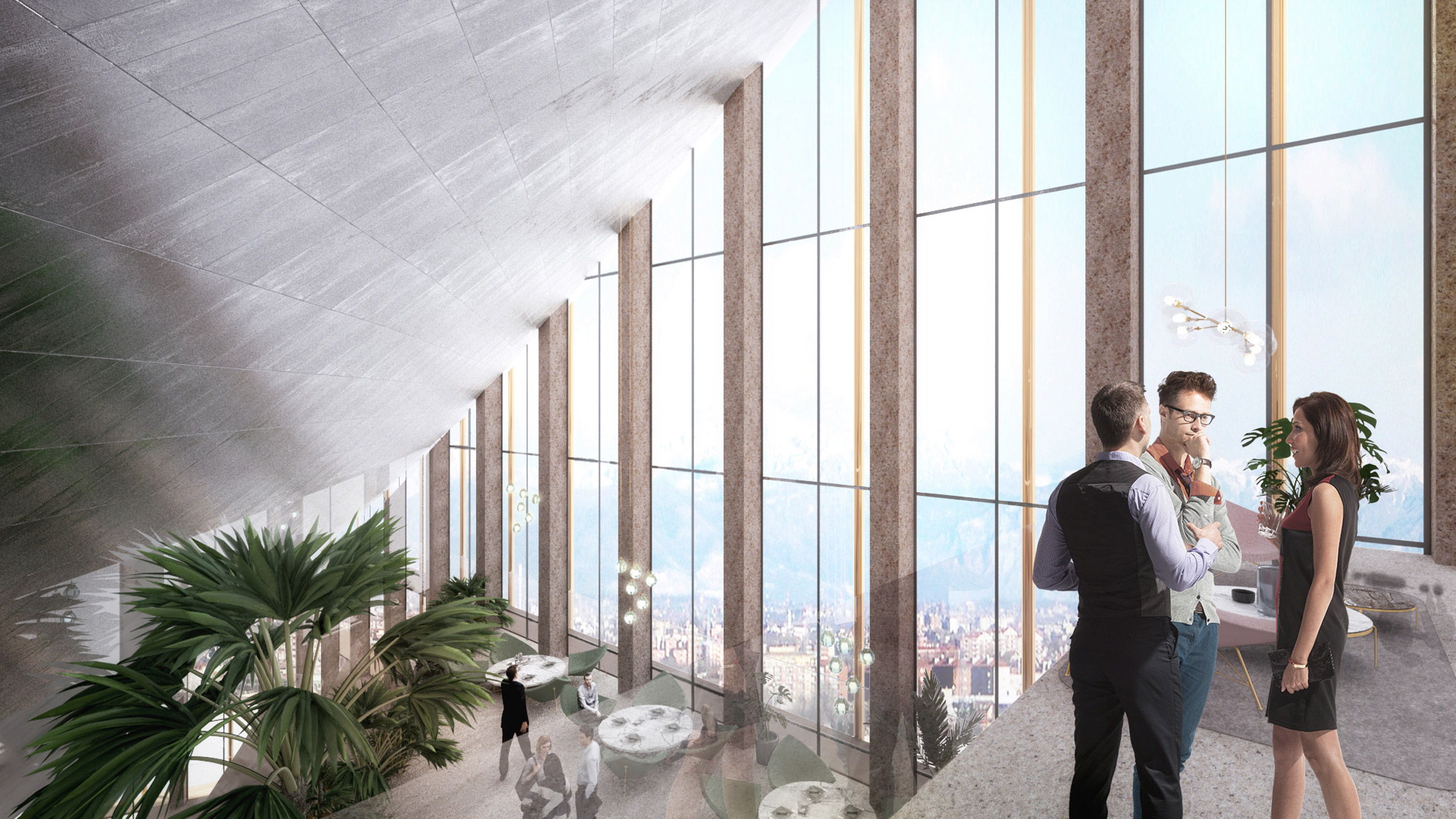 BIG is an architecture practice founded by Danish architect Ingels in 2005, and has studios in Copenhagen, New York, London and Barcelona. It is expected to complete The Portico by 2023.

Other recent projects by the studio include a twisting art gallery that bridges river in Norway and the Copenhill power plant in Copenhagen that is topped by a rooftop ski slope.

Architecture Foundation battles council to save Antepavilion structures from demolition