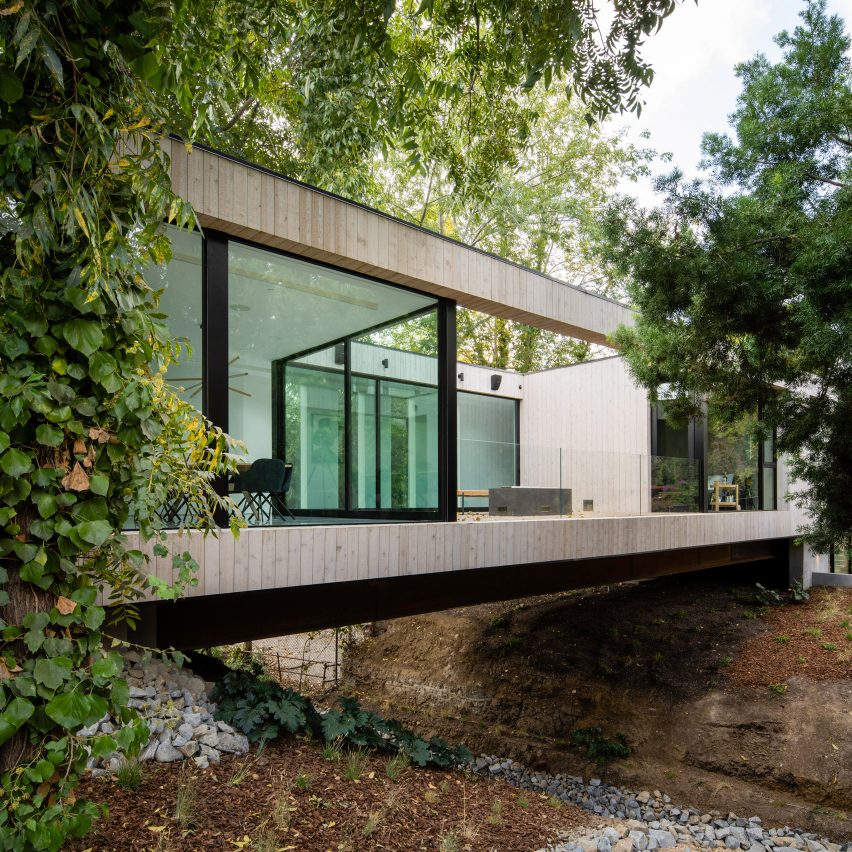 For his own residence , California architect Dan Brunn has designed a long, slender home that stretches over a brook on a wooded property in Los Angeles . 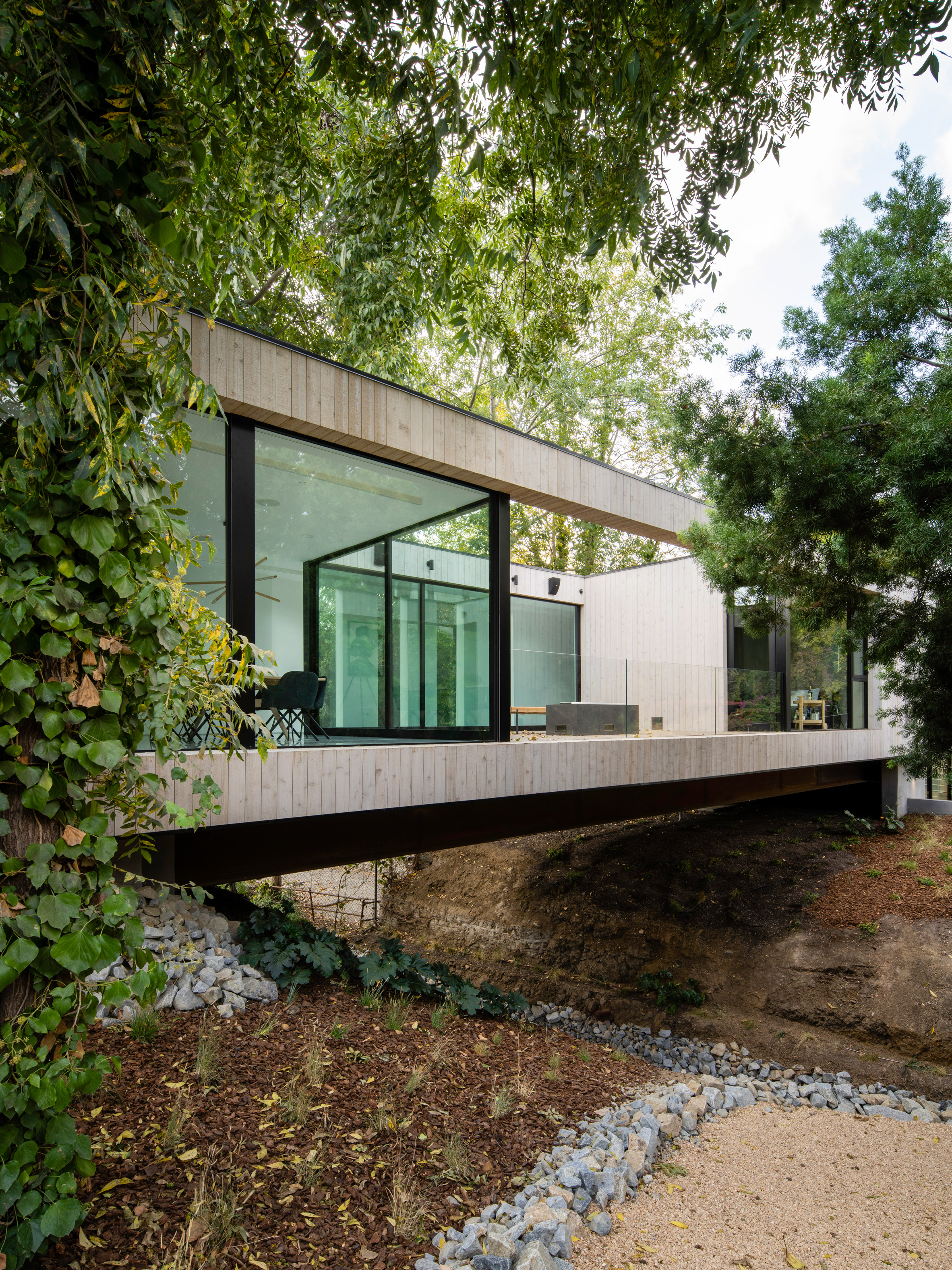 The Bridge House is located on a one-third acre property in the city’s Brookside neighbourhood, which dates to the 1920s.

Architect Dan Brunn , who leads an eponymous LA studio, designed the 4,500-square-foot (418-square-metre) house to serve as his full-time residence and a “demonstration of innovative systems and forward-thinking processes”.

Rectangular in plan, the home is 20 feet wide by 210 feet long (six by 64 metres). A large portion of the dwelling, measuring 65 feet (20 metres) in length, bridges a natural stream, giving the house its name. 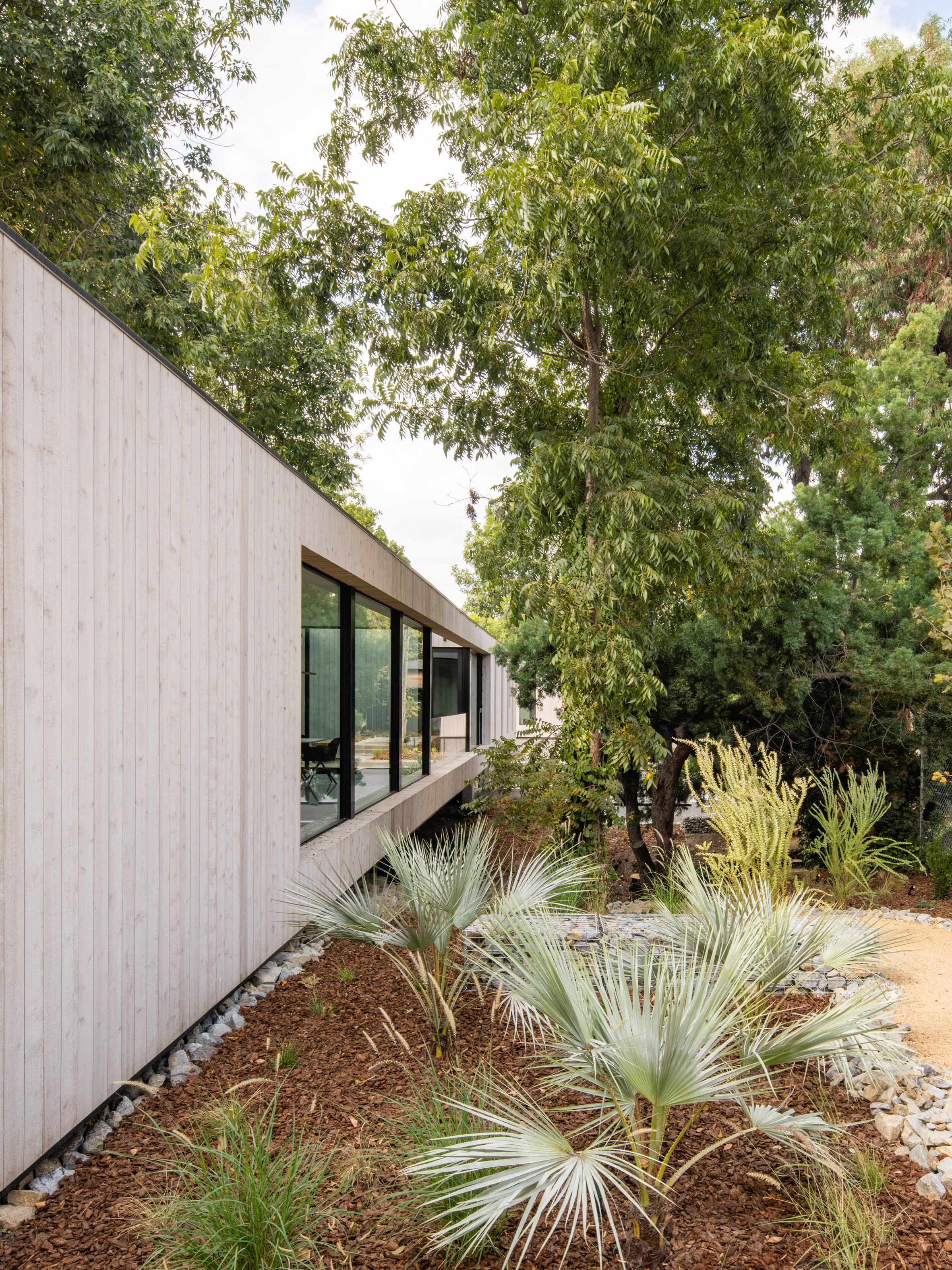 By building over the water, Brunn was able to create a spacious home that treads more lightly on the earth.

“The bridge aspect allows for less land to be disturbed, which means less impact on its immediate physical environment,” the architect said in a project description. 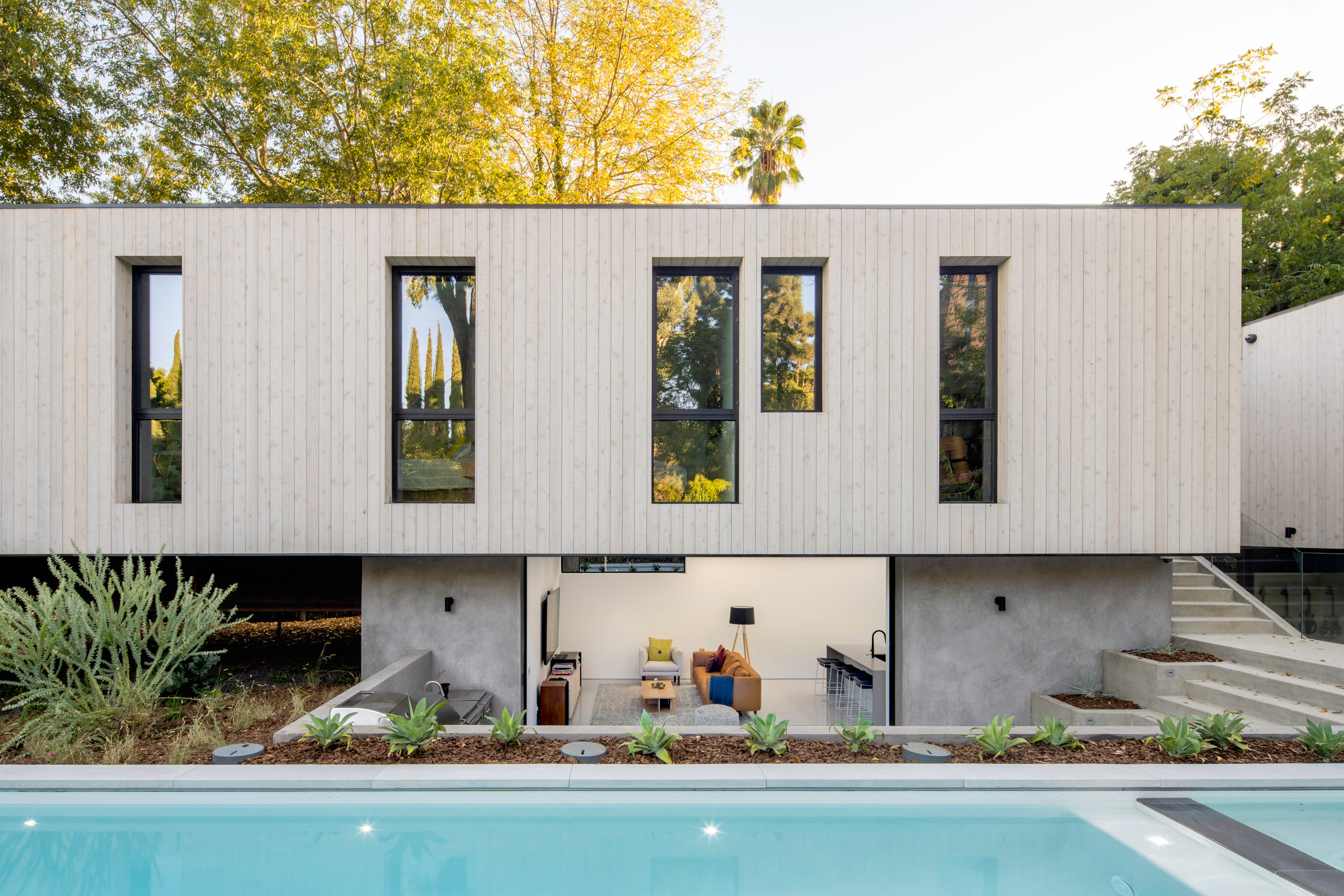 Brunn’s design was influenced by a visit to the Breakers mansion in Rhode Island – a late 19th-century building designed by architect Richard Morris Hunt for the Vanderbilt family.

Brunn was particularly taken with the estate’s elongated motor court. It helped spark the idea to eliminate the traditional front and rear yards on a suburban property, and to reorient the house so it stretches from front to back rather than across the site. 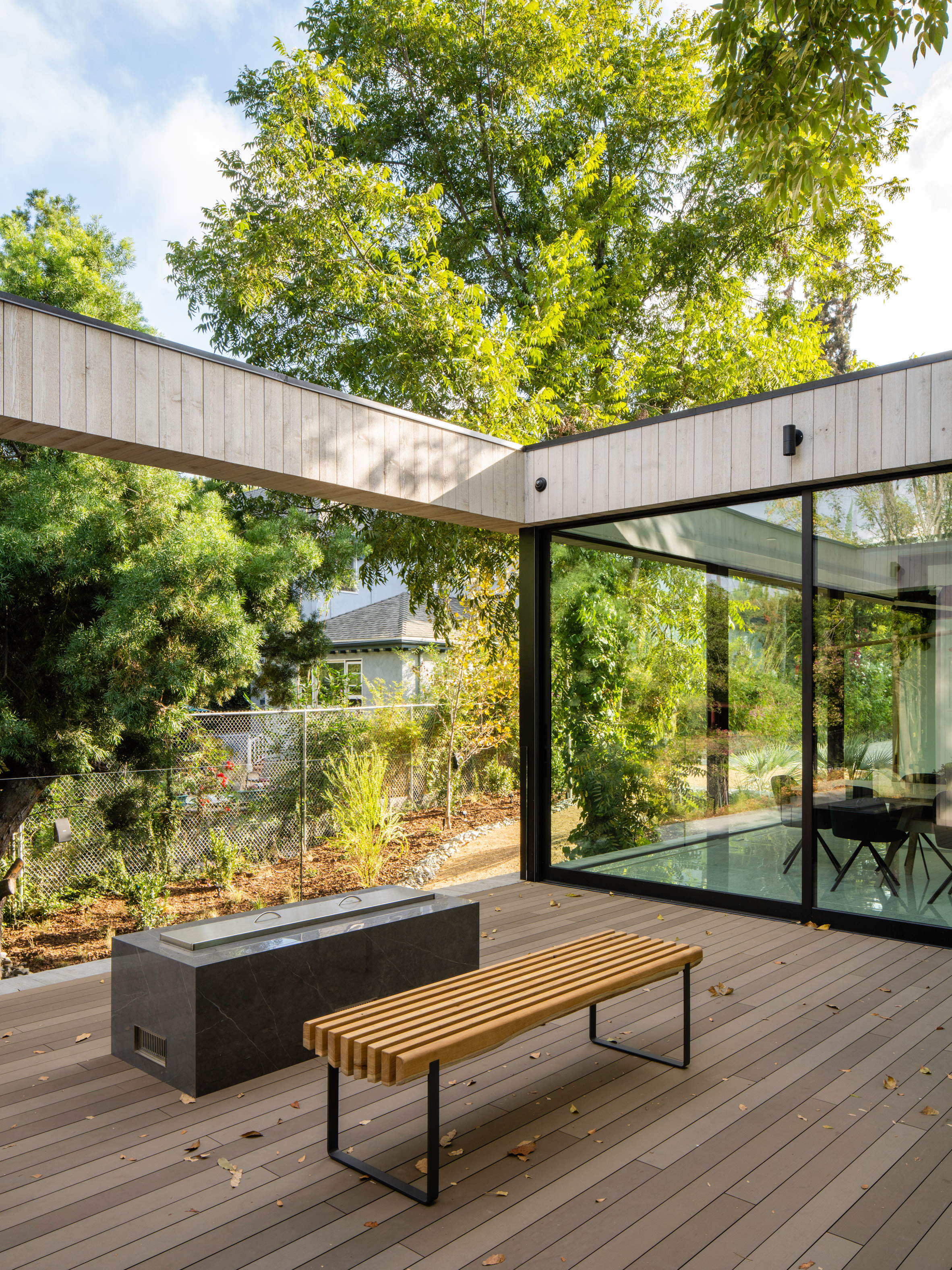 Brunn also took cues from early modern architects such as Pierre Koenig, along with the Case Study Houses – a series of experimental, modern-style dwellings built between 1945 and 1966 in southern California and elsewhere. Brunn said these precedent buildings helped in his process of “rethinking suburban home development”.

The Bridge House’s long profile is not fully evident from the street, as it stretches deep into the property. Designed to blend with the verdant surroundings, the home has exterior walls clad in pale cedar boards. Windows and doors are framed with black metal, serving as a contrast to the pale-toned siding.

Visitors enter through a set of pivoting glass doors and step into a bright home with a fluid layout. The division of public and private zones occurs at the point where the home crosses over the creek. 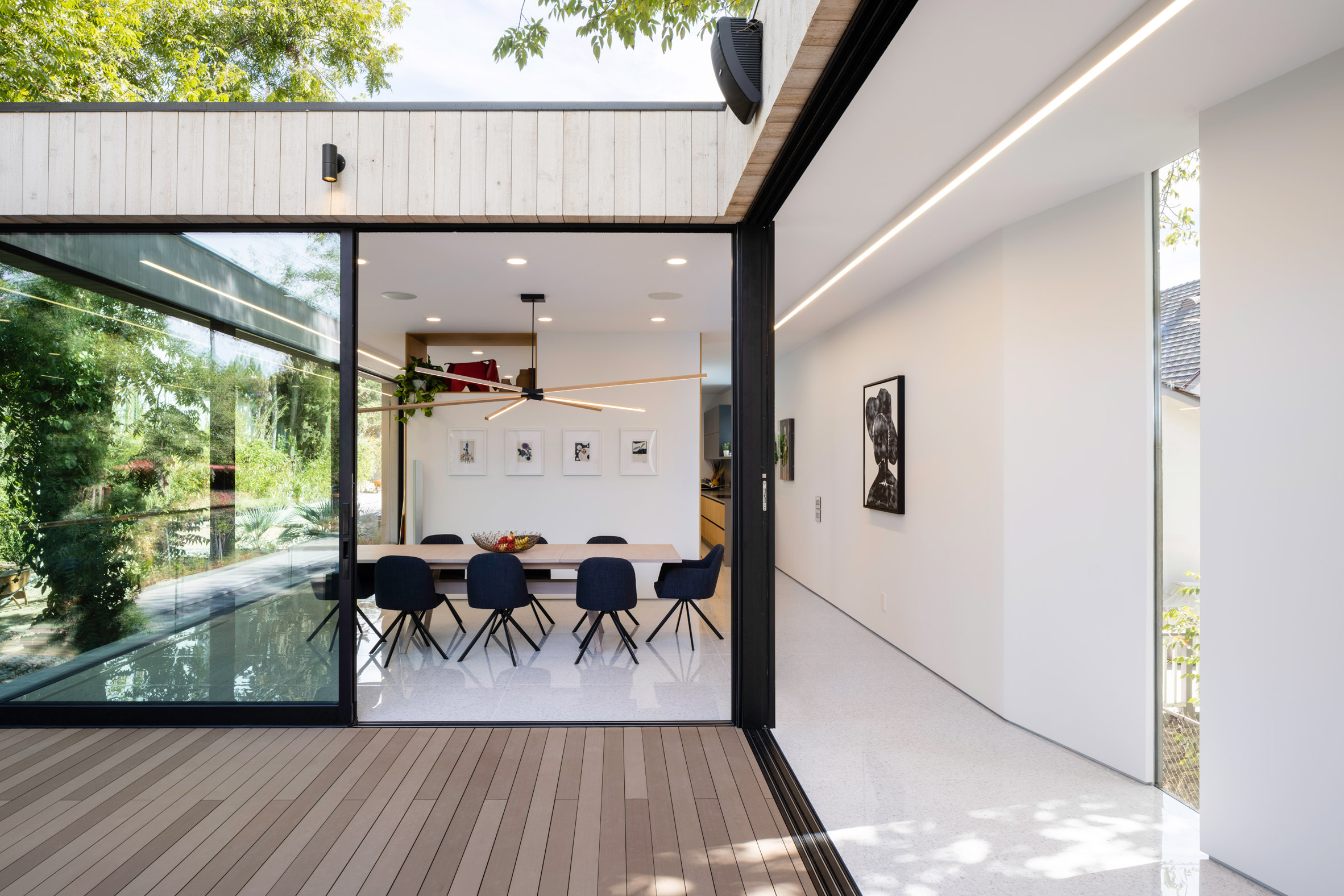 “The river forms a natural division for public and private spaces in the residence, marking the point where one circulation transitions into another,” the architect said.

The public area, which occupies the front portion of the home, includes a living room, dining room, kitchen and den. The private zone, which is set farther back, encompasses a master suite, a bedroom with an en-suite bathroom, and two bedrooms with a shared bathroom. 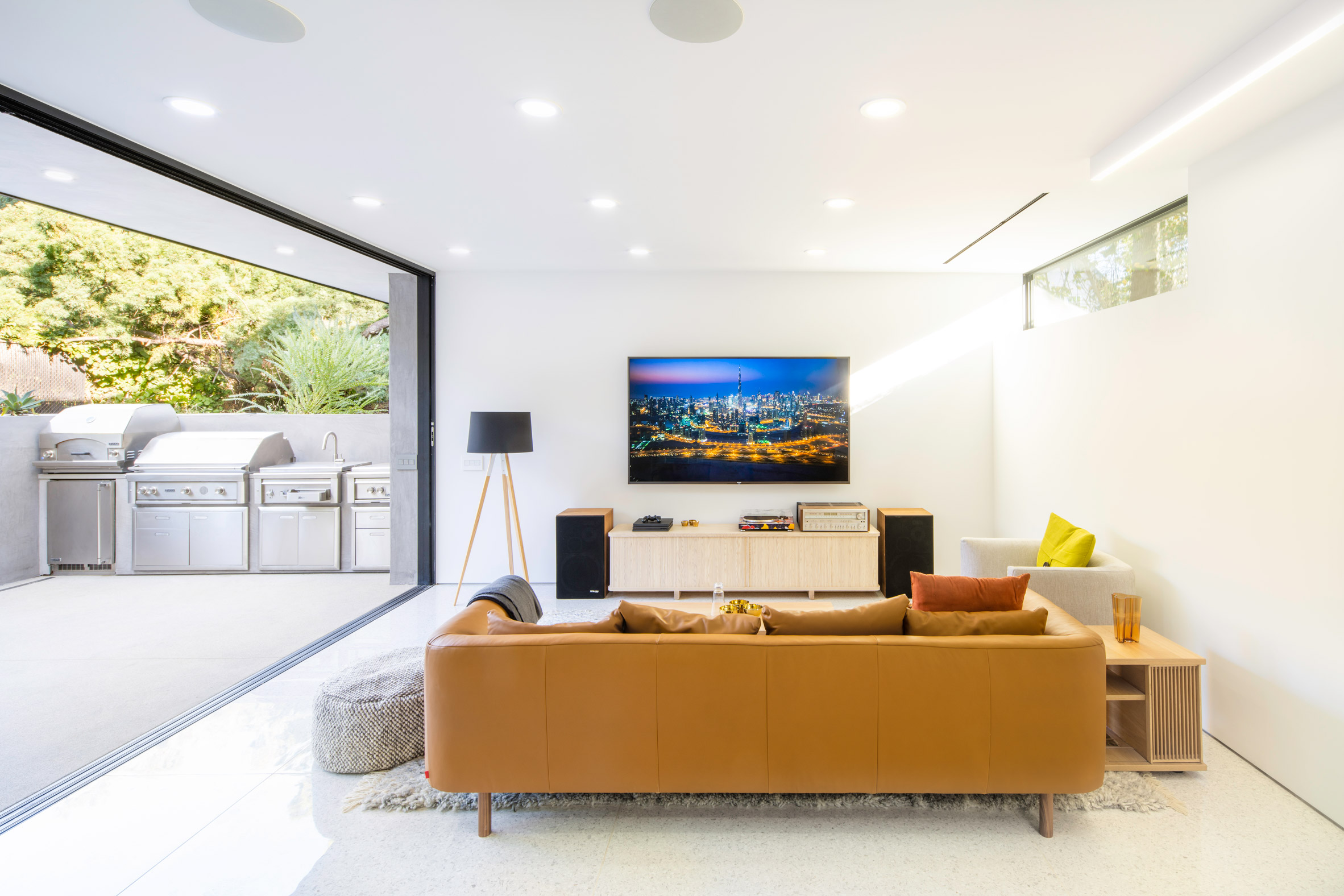 Rooms are fitted with large windows that bring in light and provide a connection to the outdoor landscape. Custom shades and low-emissivity glass help mitigate solar heat gain and reduce energy consumption.

The lower level of the home contains a pool house with a game room and shower, which overlooks an infinity-edge swimming pool. The pool’s water is heated via photovoltaic panels on the roof, which help generate energy for the entire dwelling. 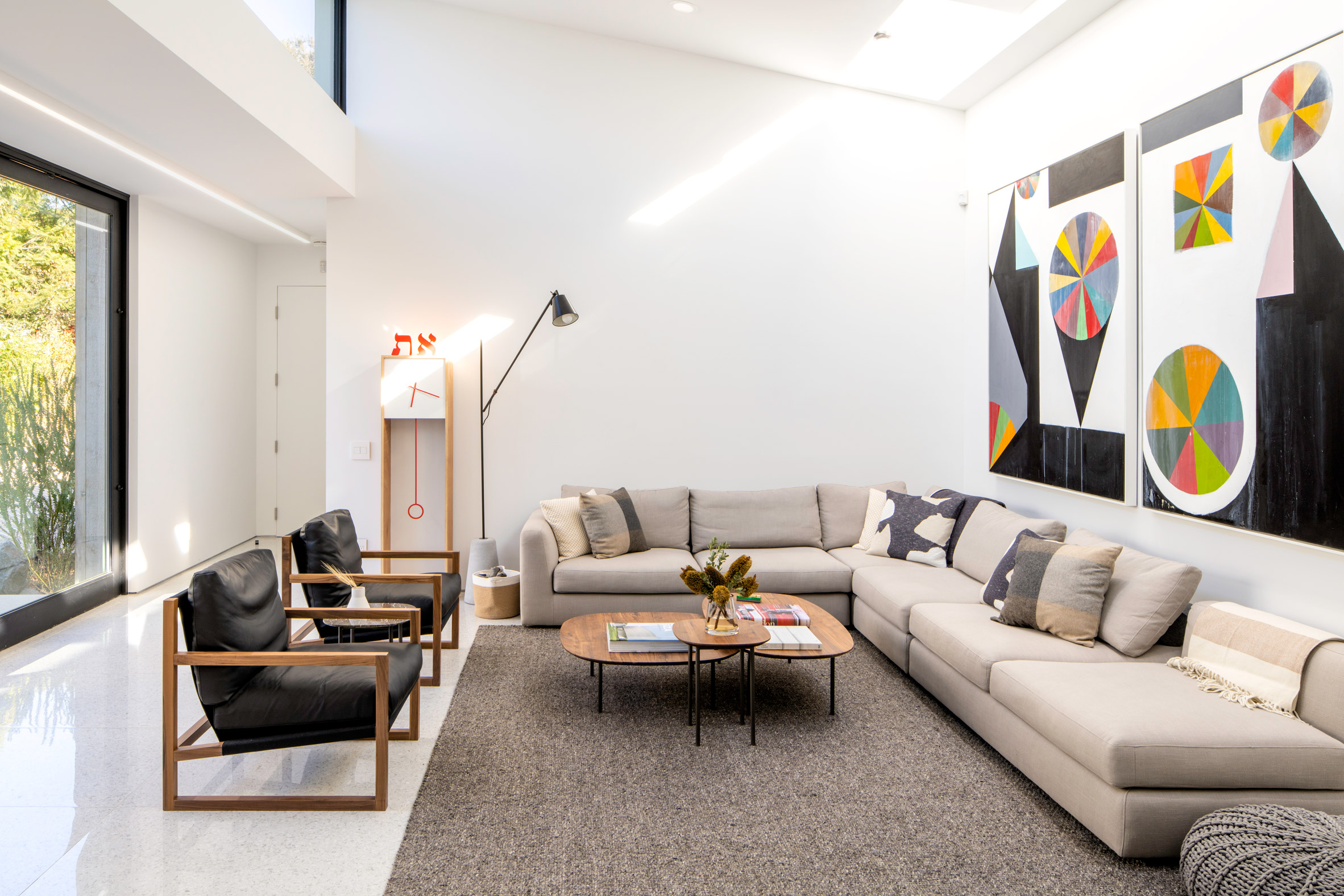 In terms of the structural system, the house has a modular steel frame created by Canadian company Bone Structure . Informed by the aerospace industry, the patented system combines standard post-and-beam construction with eco-friendly strategies, such as using recycled steel and minimising waste.

In addition to framing components, Bone Structure’s system includes a mix of rigid and foam insulation, which helps form an airtight building envelope. Brunn noted that the system is flexible, durable and “affords expedited on-sight assembly”. 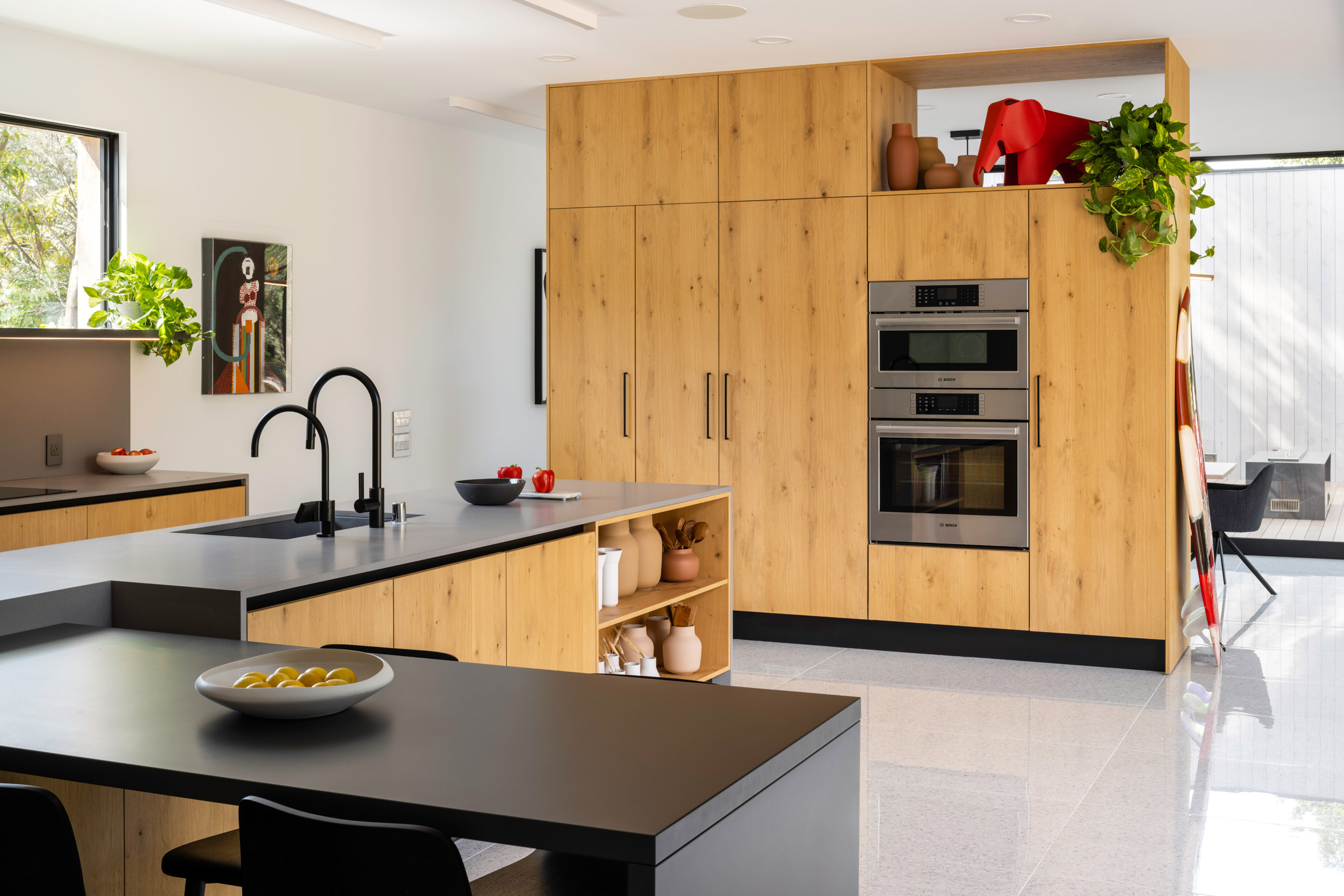 The architect worked with a long list of brands to realise the house, including Caeserstone , Stickbulb and even BMW . Throughout the coming year, a variety of events and exhibitions will be hosted at the dwelling.

Brunn, who studied architecture at Harvard’s Graduate School of Design, founded his studio in 2005. His projects include the renovation of a 1970s house designed by architect Frank Gehry , the design of a flagship store for clothing brand Road to Awe , and the creation of a Las Vegas boutique with illuminated glass shelves .

Photography is by Brandon Shigeta.