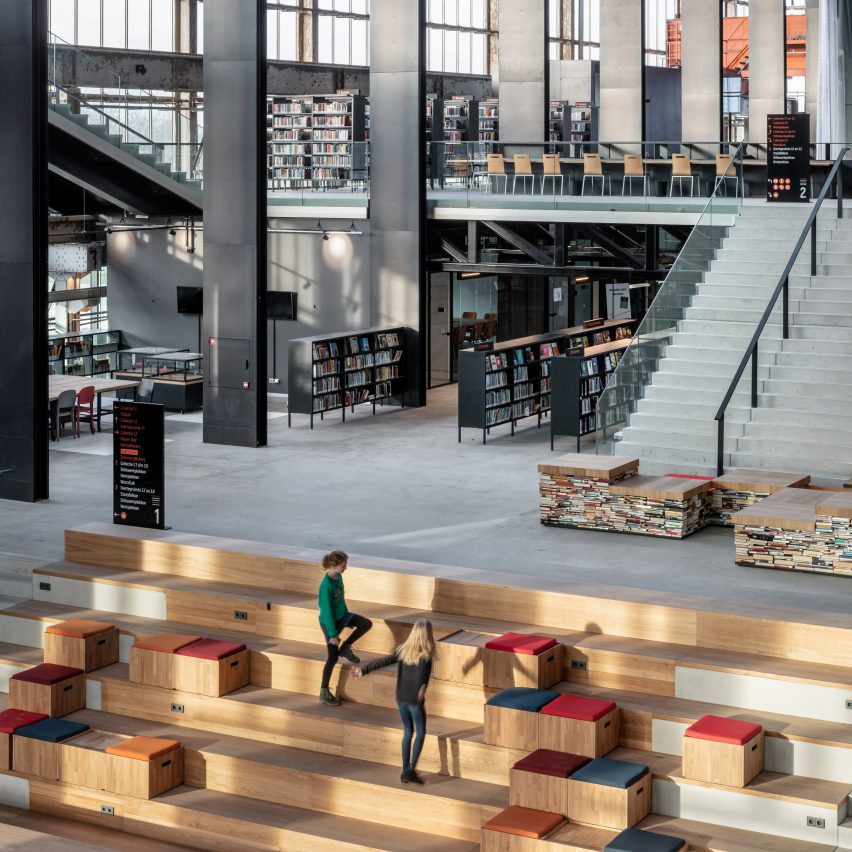 Located in Tilburg’s station district, the LocHal library is named after the locomotive shed in which it is housed. The building’s imposing footprint measures 90 x 60 metres with a height of 15 metres. 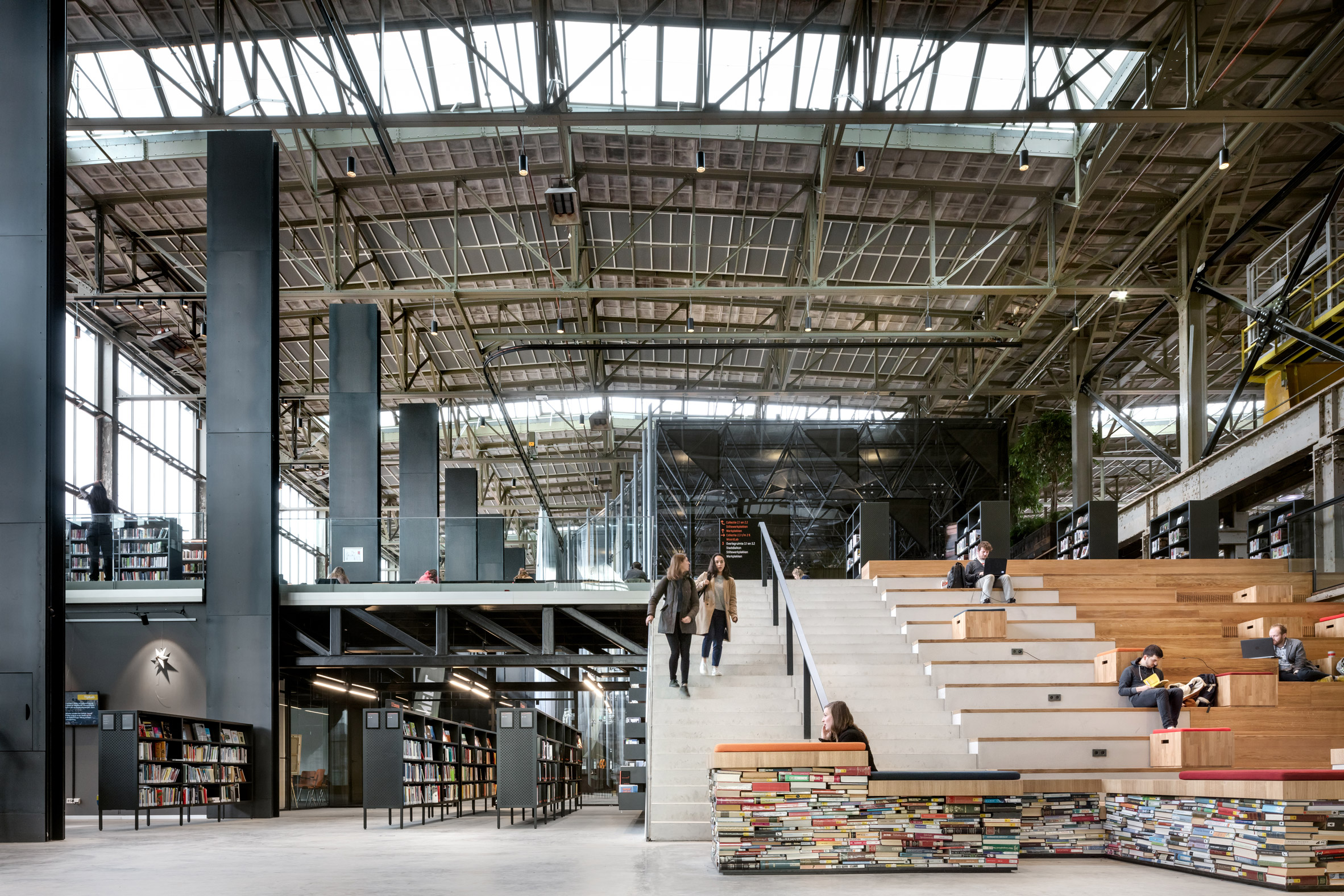 Civic Architects, working with Braaksma & Roos Architects and Inside Outside, has retained much of the industrial building’s steel structure with its tall glass windows and towering riveted columns – that have shape the renovated interior.

Conceived as contemporary reinterpretations of the original building, new solid structures made from black steel, concrete, glass and oak are combined with a series of movable giant textile screens that can create temporary zones within the building. 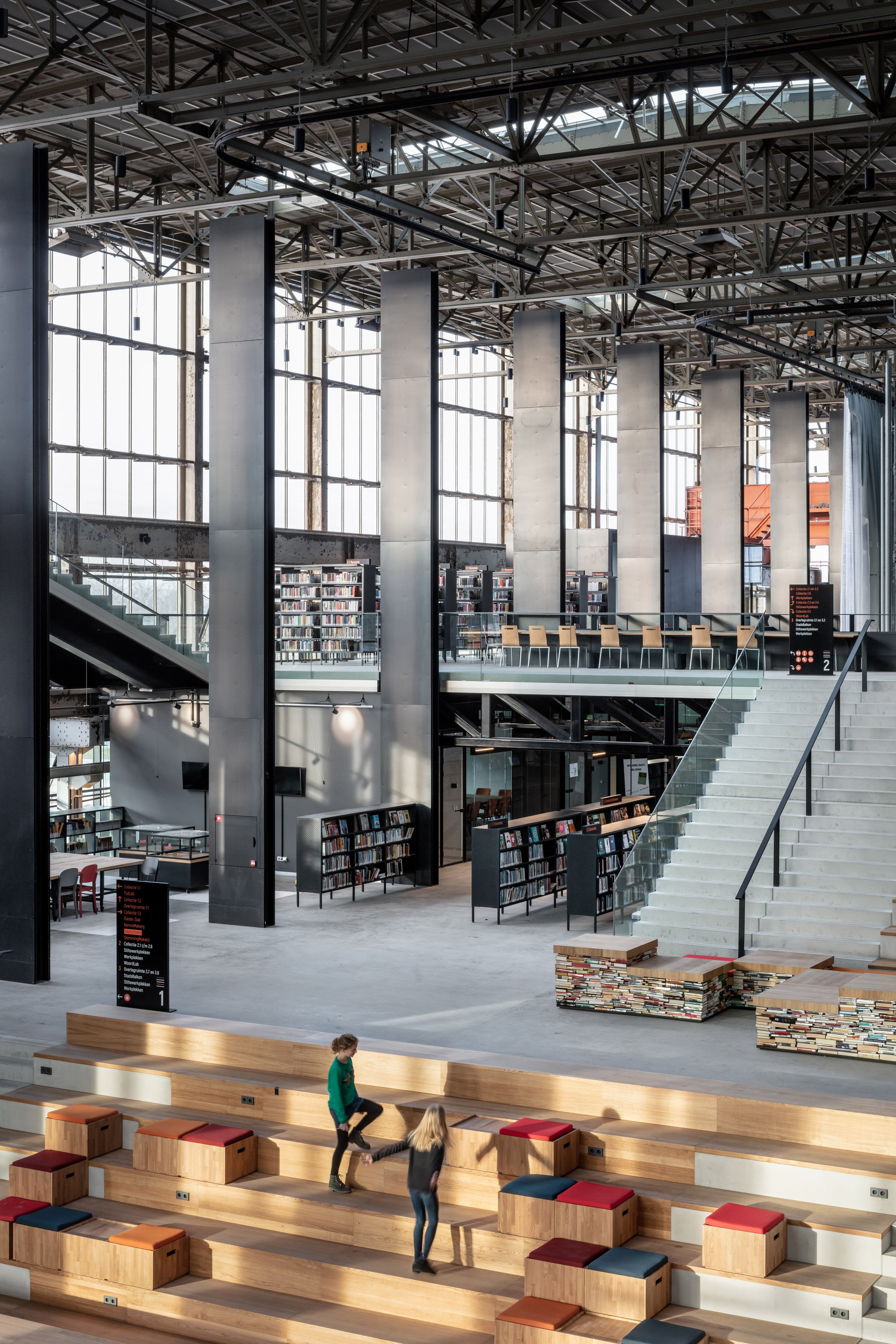 Opened last month, the library is run by Midden Brabant Libraries which is using the space to showcase its library concept.

As well as a reading space, the building also functions as a meeting place for events organised by partners such as the arts organisation Kunstloc Brabant, and the co-working company Seats2Meet. 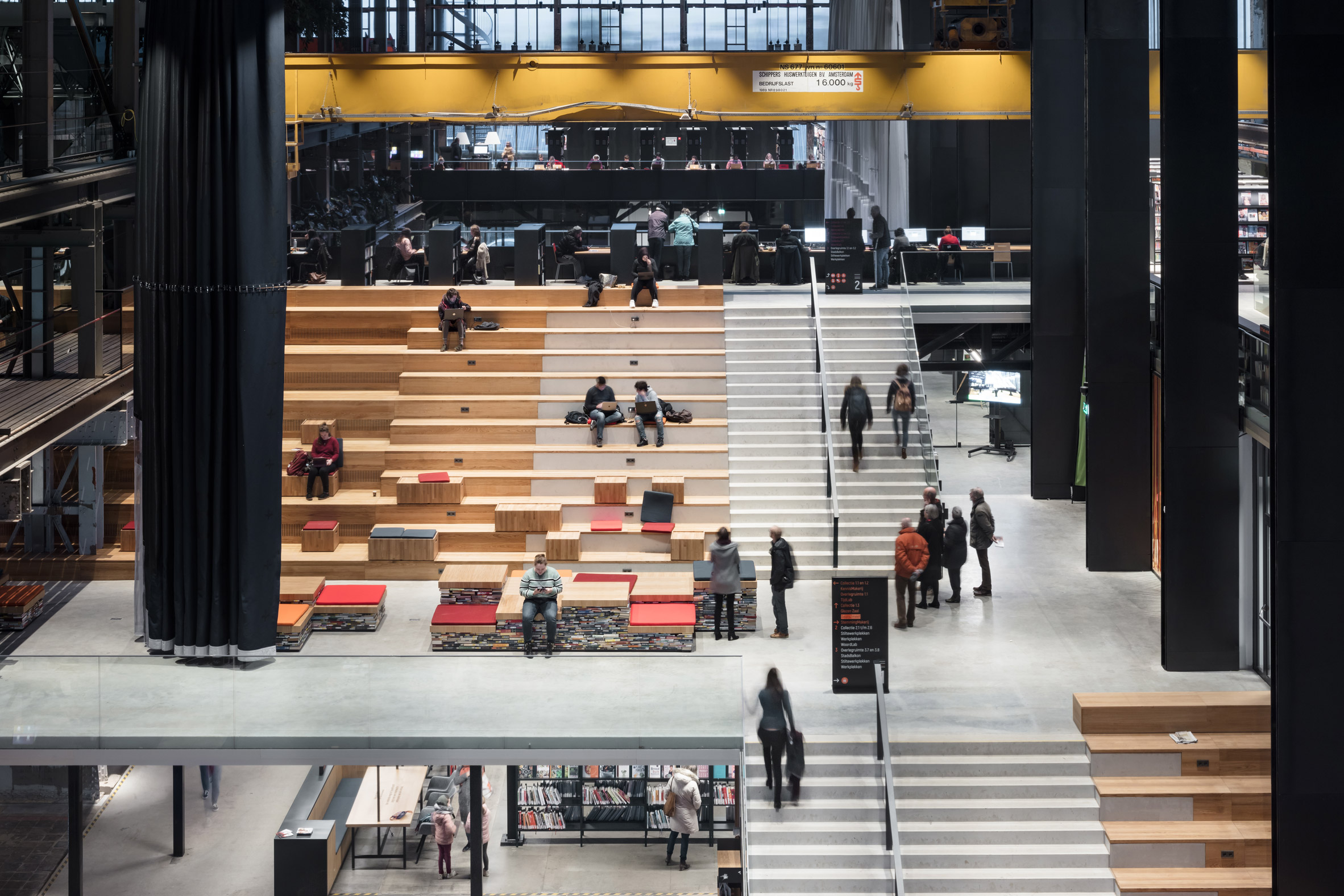 To make the building as welcoming and accessible as possible, the entrance hall is conceived as a covered city square with large public reading tables that double as podia, an exhibition area and a coffee kiosk.

A set of broad steps which can be used as event seating for over one thousand spectators connect the ground floor square to the building’s upper floors where huge glass facades allow for plentiful daylight. 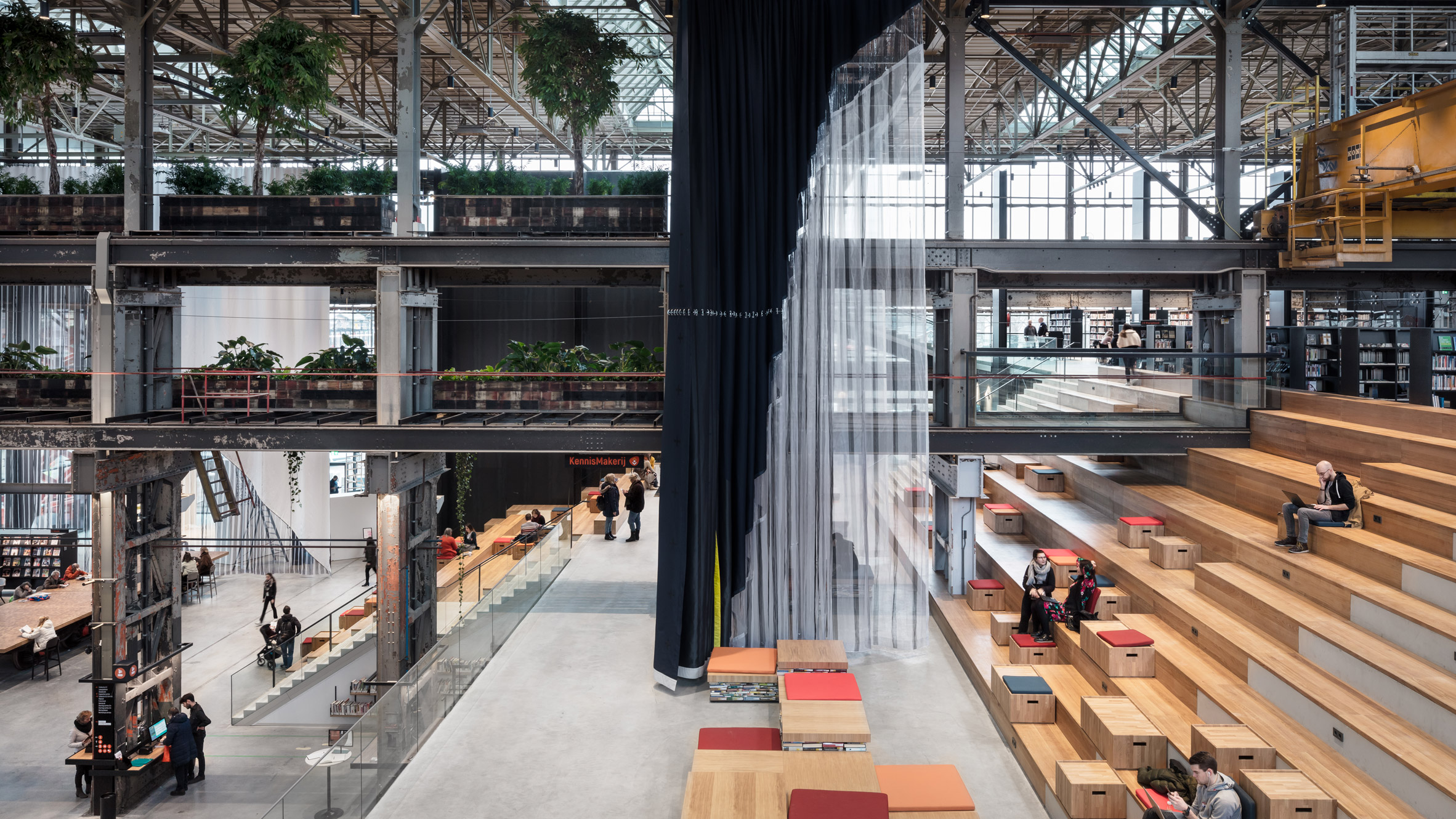 On the second floor, the gallery and stairways that circle the perimeter of the space allow visitors to get a closer look at the building’s historic glass walls as they browse the bookcases or make use of the quiet reading areas.

A large balcony on the third floor offers panoramic views of the city. The open interior allows for sightlines across the diagonally stepped interior landscape. 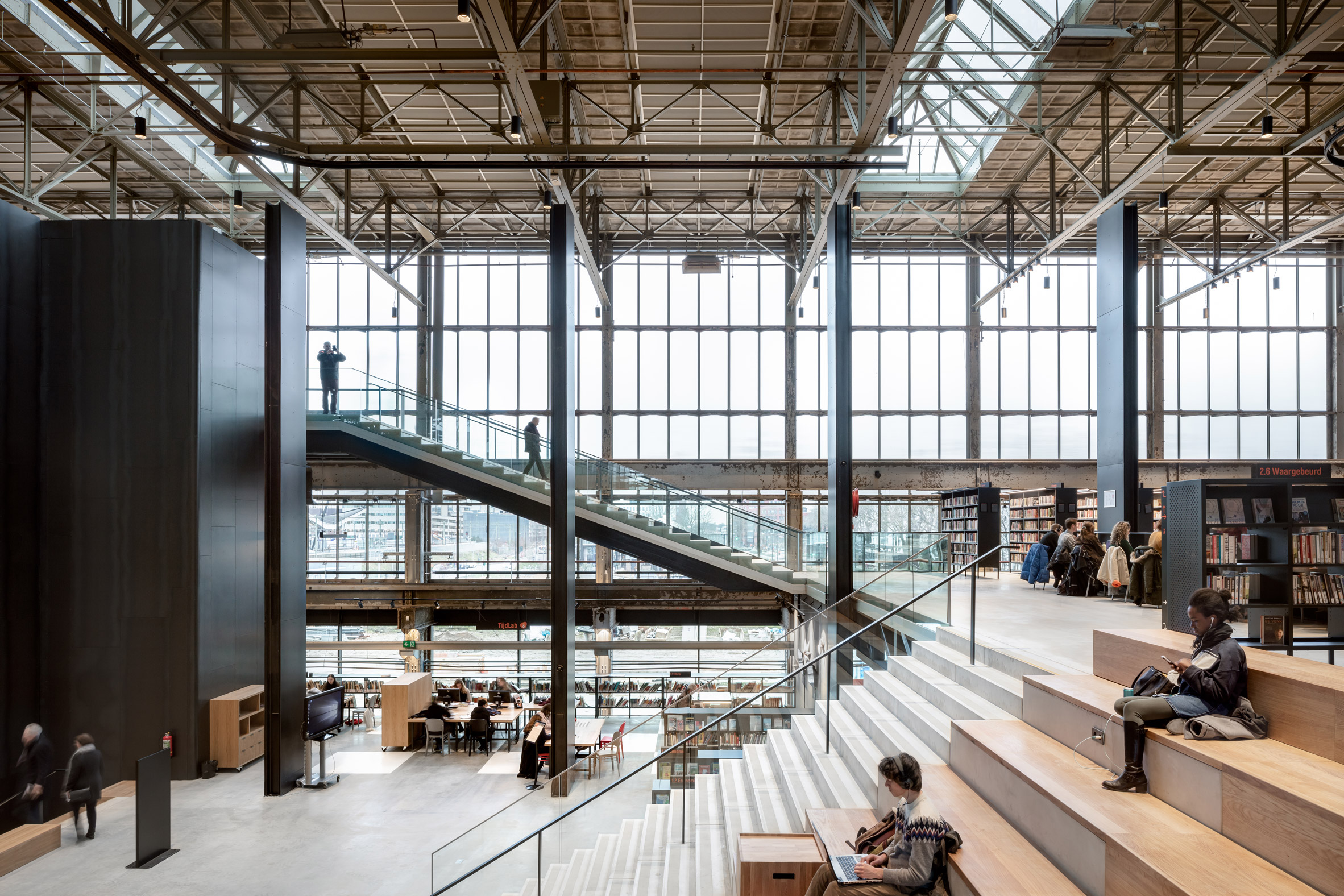 In addition to the building’s new solid structures, Civic Architects also introduced six giant movable textile screens, which can be used to temporarily divide the open space into zones.

Designed by Inside Outside and woven by the Tilburg Textile Lab, the six screens not only create more intimate, smaller scale environments within the cavernous space, but they also improve its acoustic properties. 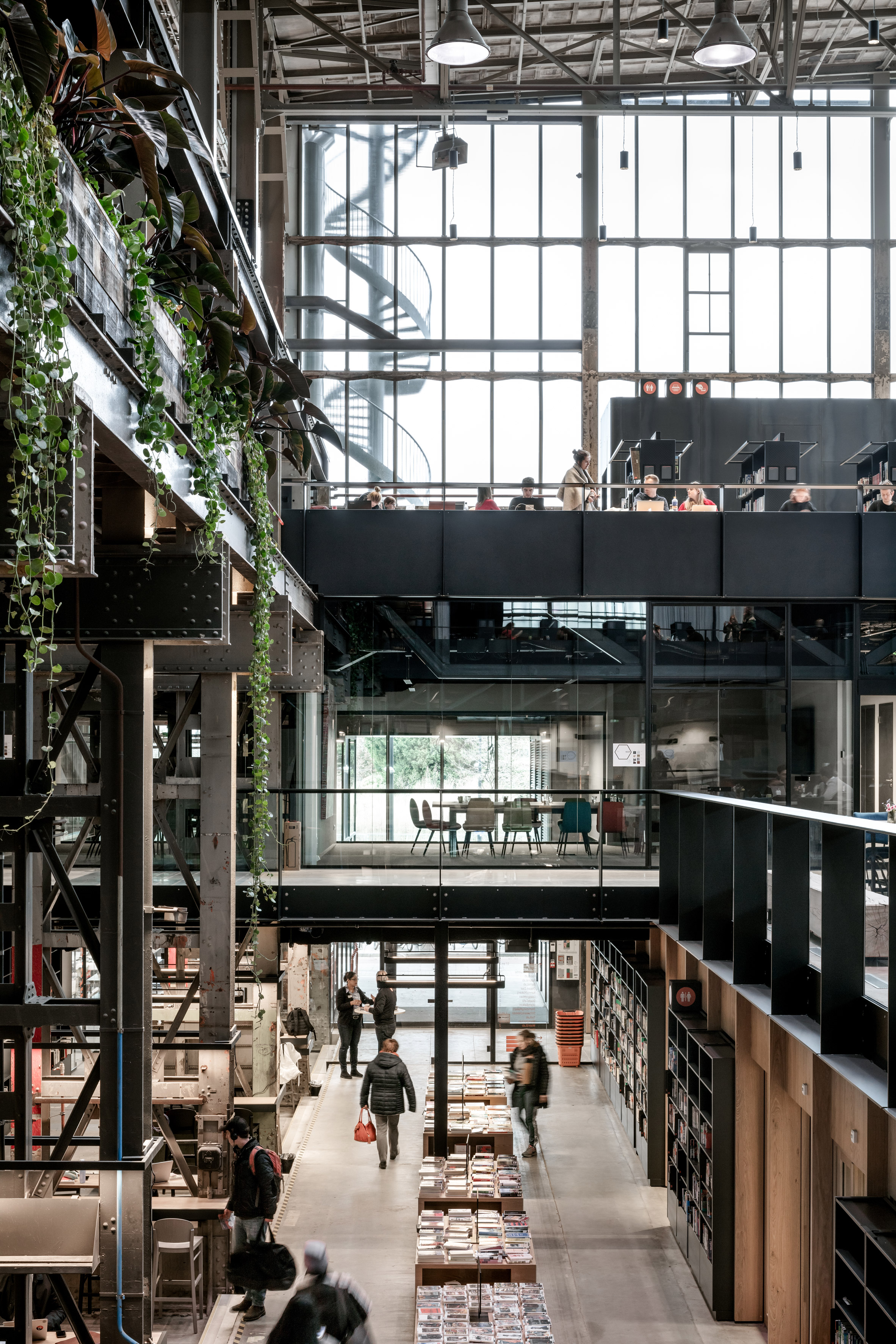 The screens can be repositioned using a computerized system. They can, for example, be moved to separate areas from the higher library floors, or across one of the staircases to create a small, semi-private auditorium.

The largest screens, measuring 50 metres across and 15 metres high, can be used to conceal the coffee kiosk or create a backdrop for it. When positioned in front of the windows on the south side of the building, the screens soften the light that floods through the tall glass facades into the inner square. 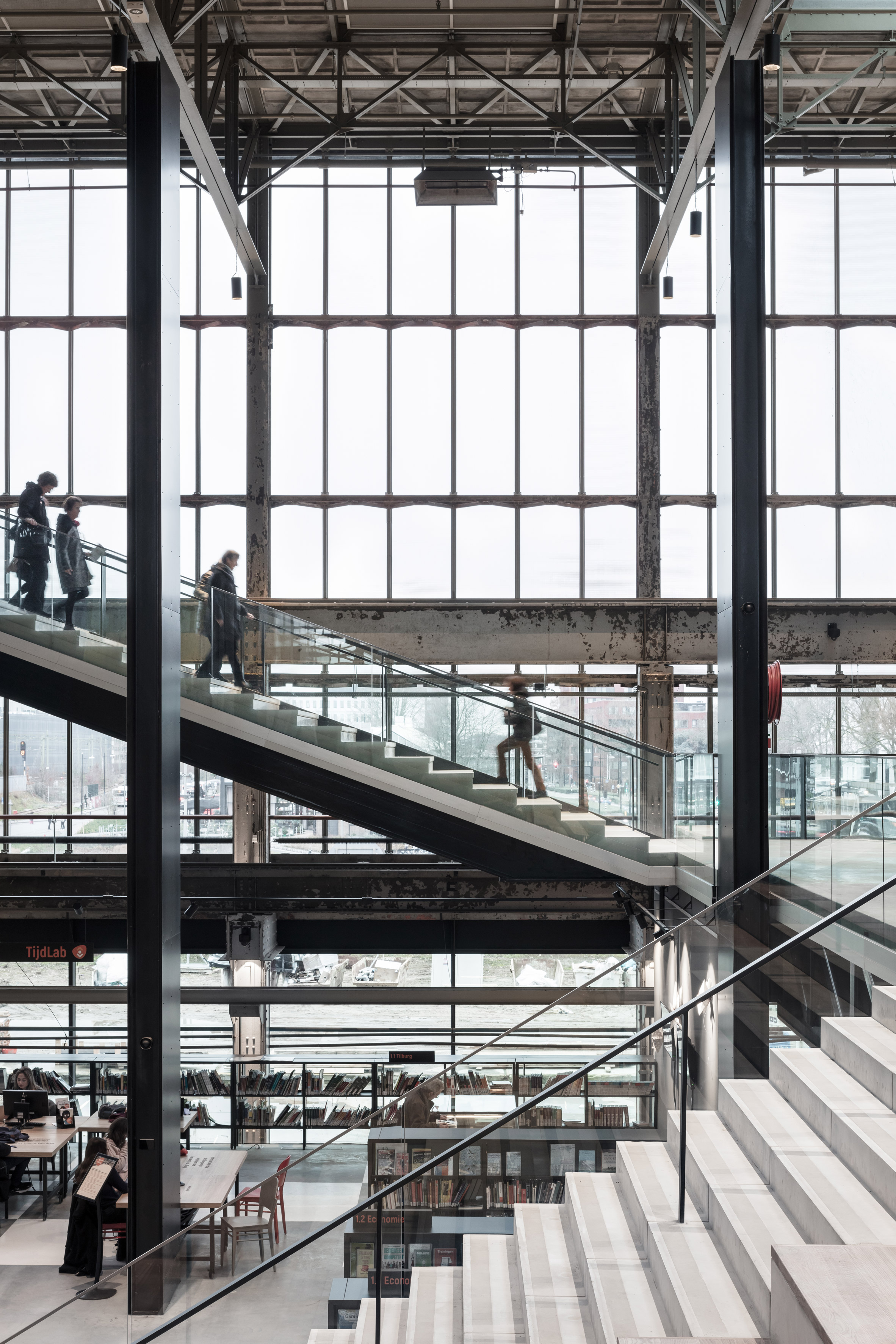 A number of spaces throughout the building referred to as labs provide spaces where visitors can learn new skills.

For example, one of the labs is in the form of a glass cube, formerly part of the concert hall in Amsterdam’s Beurs van Berlage building. There is also a Food Lab, a Word Lab, a DigiLab and a Heritage Lab.

There is also a children’s library, the design of which was inspired by the nearby fairytale theme park, De Efteling. Here young visitors can wander through giant storybooks and browse bookcases in the form of coloured pencils and rulers. 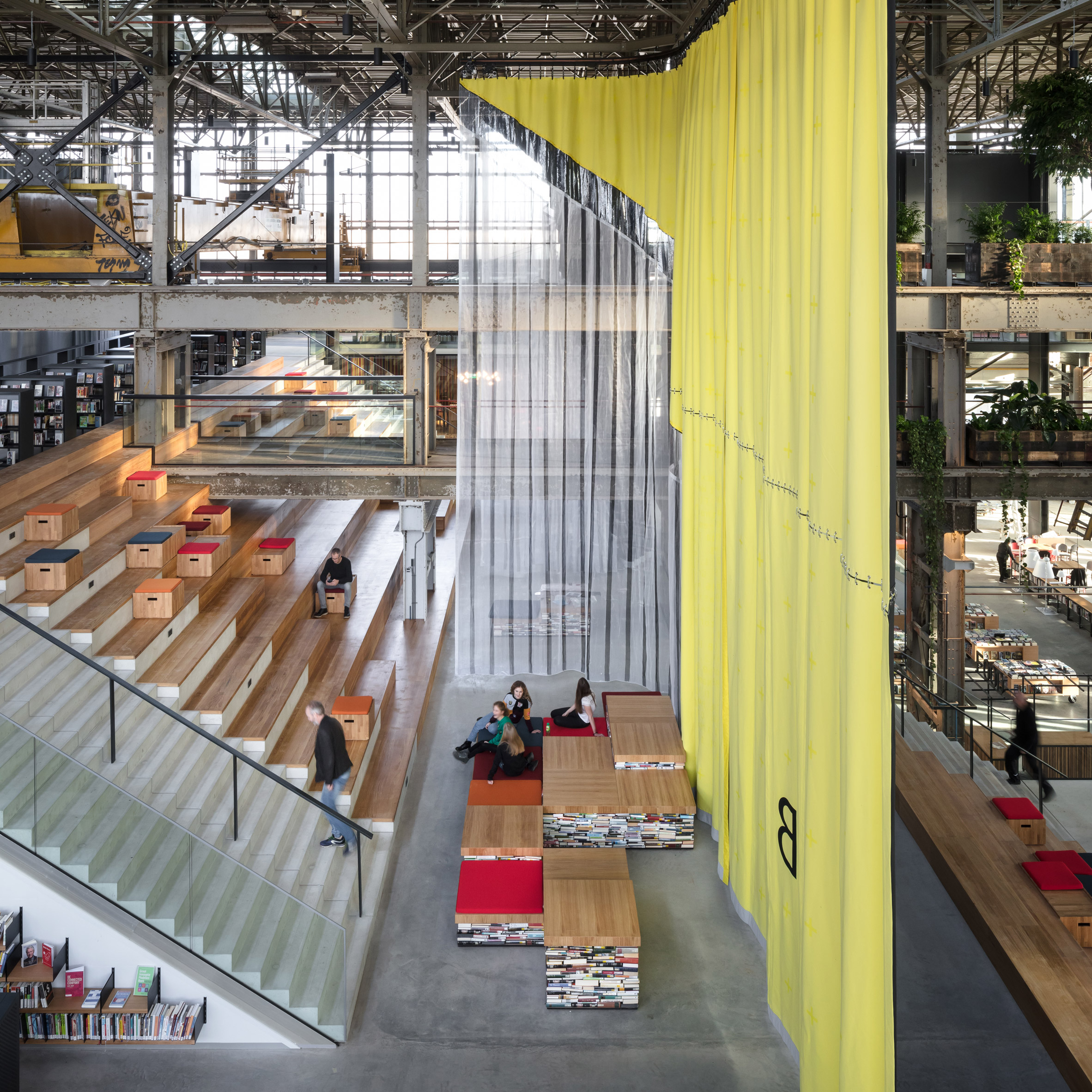 After dark, the building’s glass structure becomes a welcoming beacon of light in the city centre. At this time, the architects said that the interior takes on the character of a theatre, with all surfaces bathed in a warm light.

“The imperfections of the existing materials contribute much to the authentic atmosphere of the LocHal,” said Civic Architects.

“The architecture creates a colossal, industrial setting for all types of activity. The interior design, with its unique fixtures and fittings, creates an extra layer that adds playful variation to the overall visual experience.” 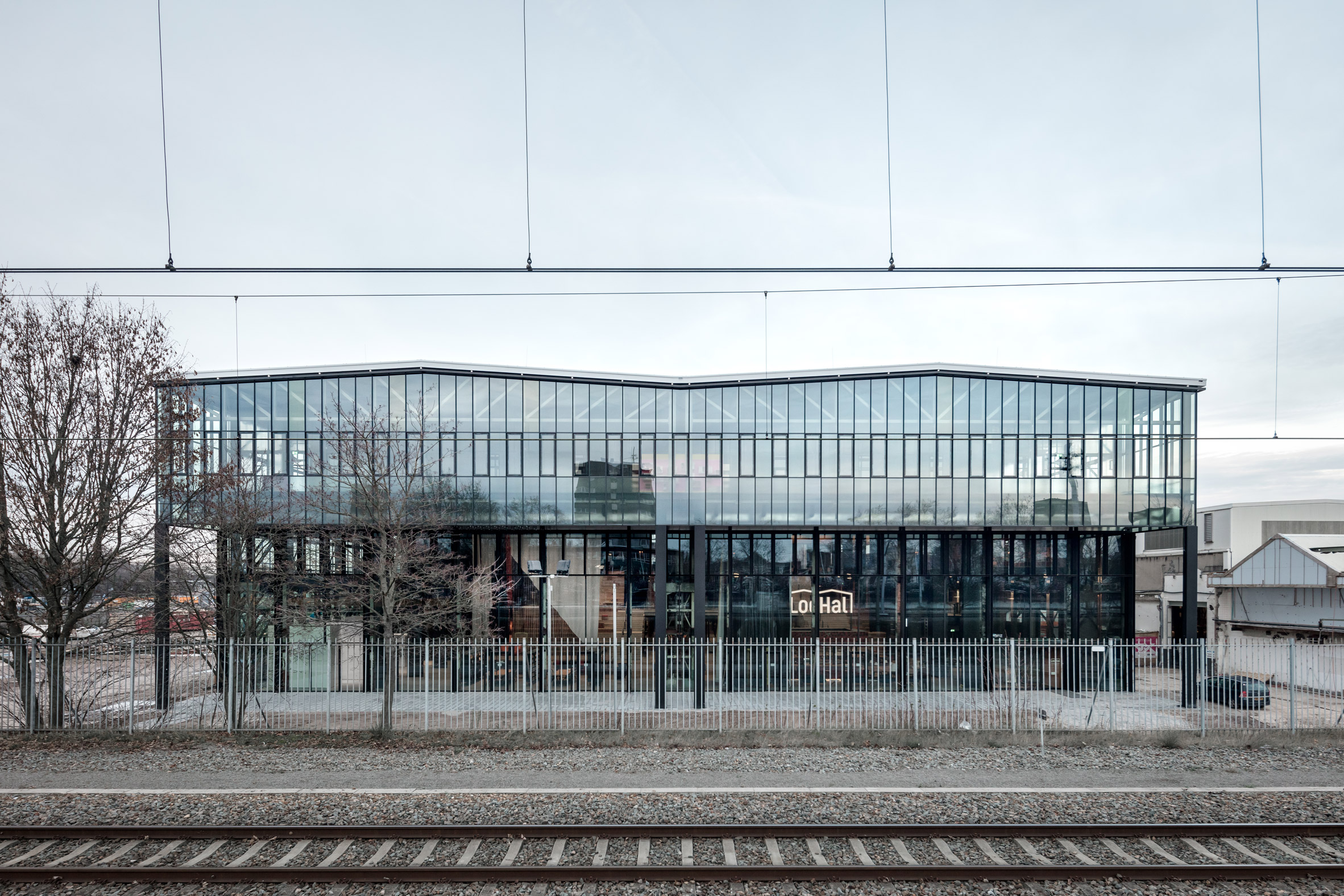 In London, restaurateurs Shamil and Kavi Thakrar transformed a former railway transit shed close to King’s Cross station into an outpost of their hugely successful restaurant chain, Dishoom in 2015. The spacious interior pays homage to the Irani cafes that sprung up around Bombay – now Mumbai – during the first half of the 20th century.

Meanwhile Studio Puisto created a pine sauna complex within a former customs checkpoint, which later served as a warehouse building in Tampere, Finland.

Photography is by Stijn Bollaert.