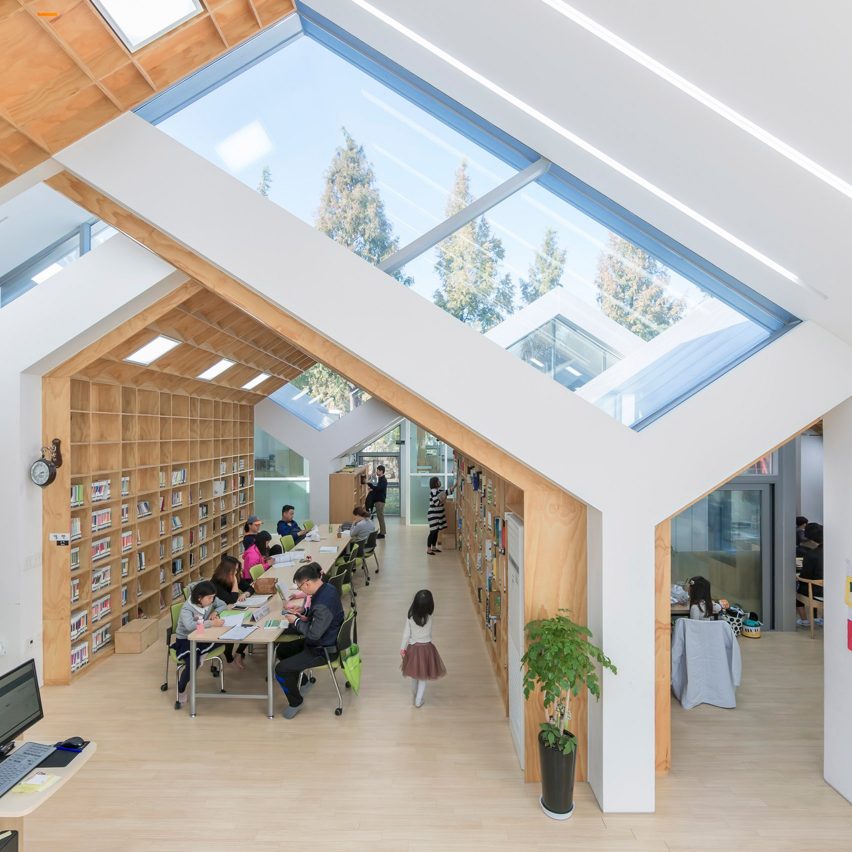 Unsangdong Architects has designed the Hannae Forest of Wisdom community centre in Seoul with a row of intersecting gabled forms enclosed by glass end walls.

Seoul studio Unsangdong Architects developed the centre in the Hannae neighbourhood as a cultural space for the community that repurposes an abandoned plot near the entrance to a public park. 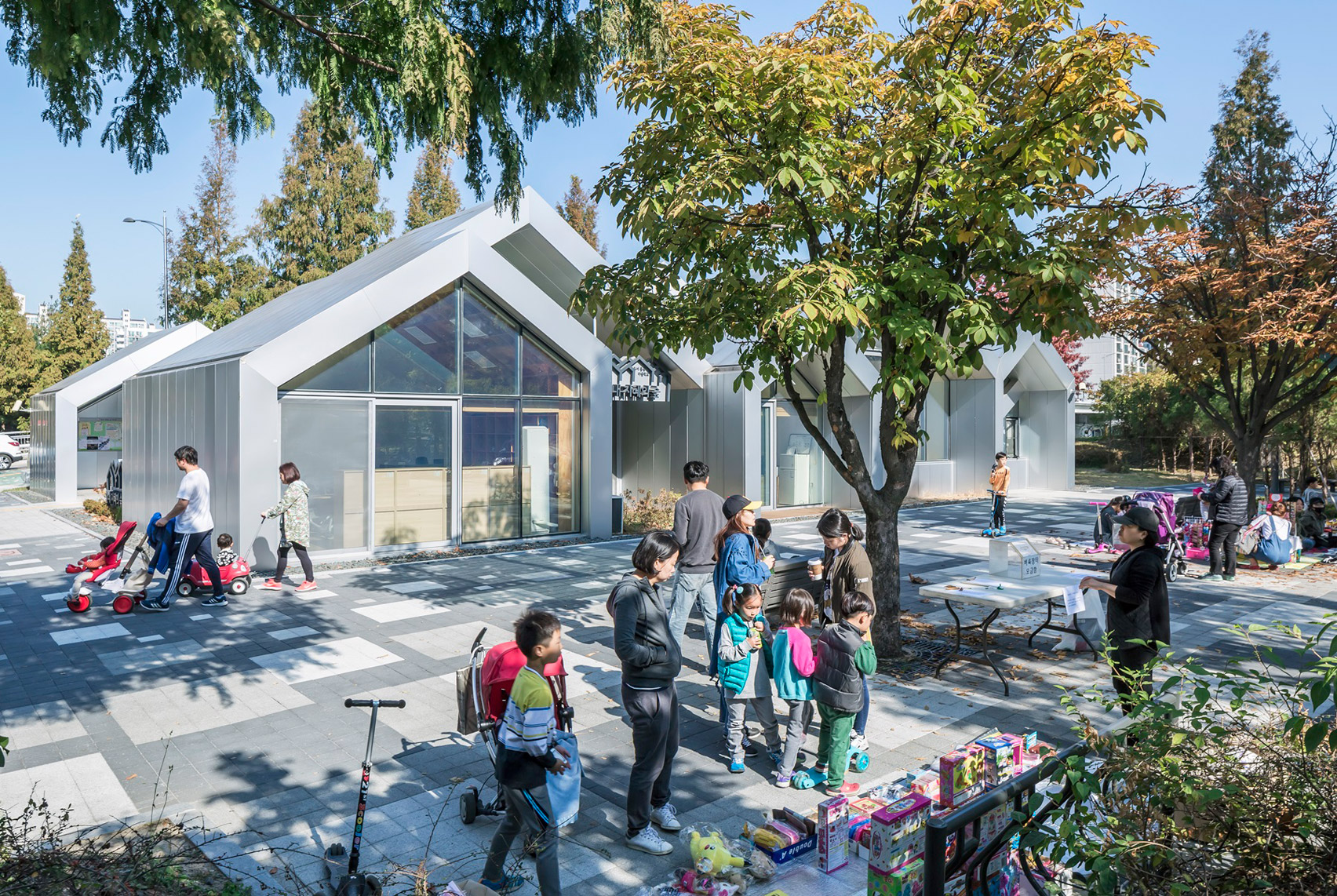 To find a way to encourage local residents to re-engage as a society, the architecture studio designed the building to accommodate a library, cafe and spaces for after-school education.

Unsangdong Architects described the building as “an artificial forest” that complements the trees of the surrounding park. 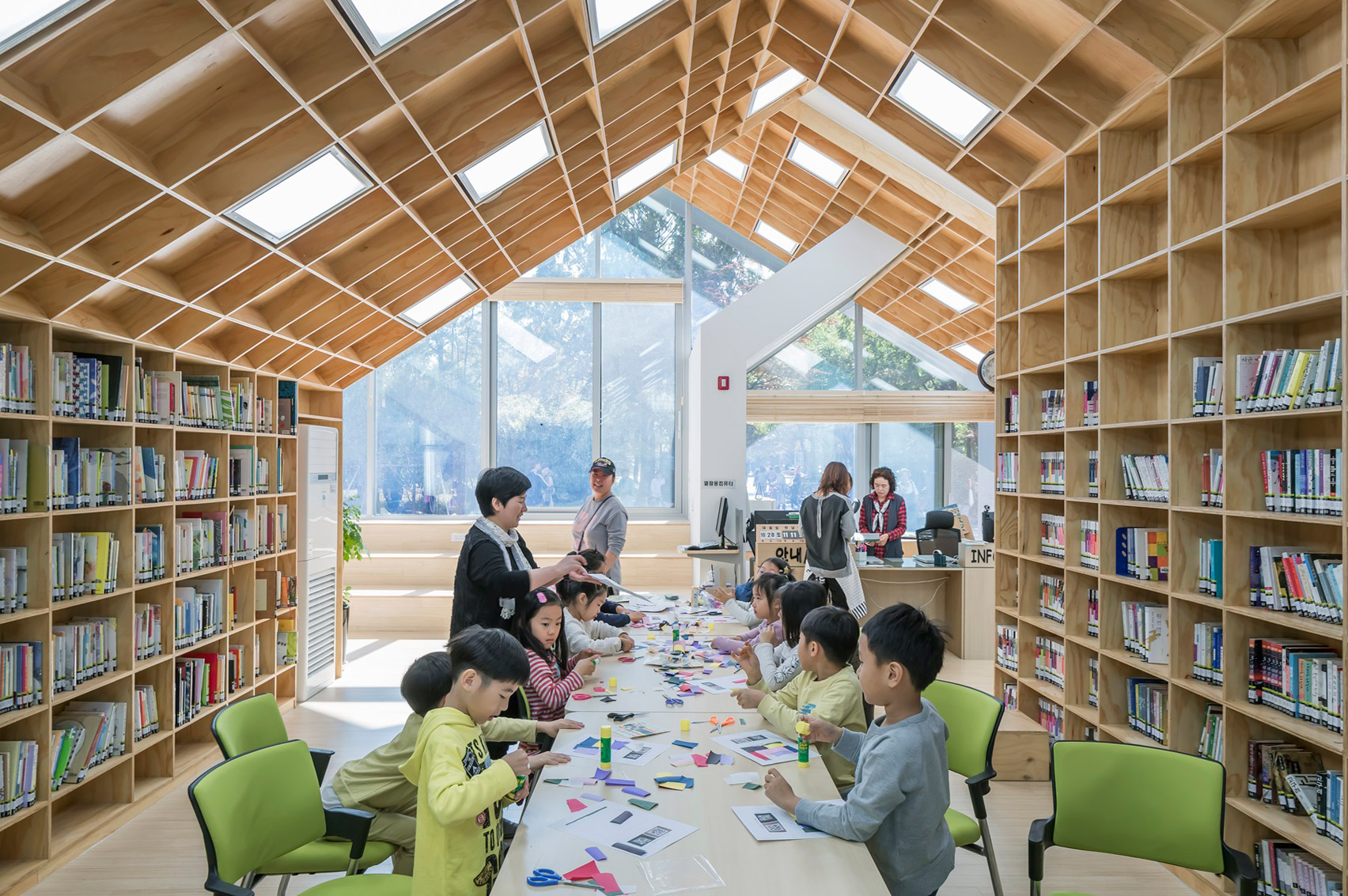 The Hannae Forest of Wisdom is also designed as a rebuttal to the built environment of the neighbourhood, where concrete apartment blocks provide high-density housing with little connection to nature.

“It is not a dominant architecture, but the space expands one’s imagination,” said Unsangdong Architects. “Its shape is a combination of nature and concentric encounters, symbolised as overlapping mountains.” 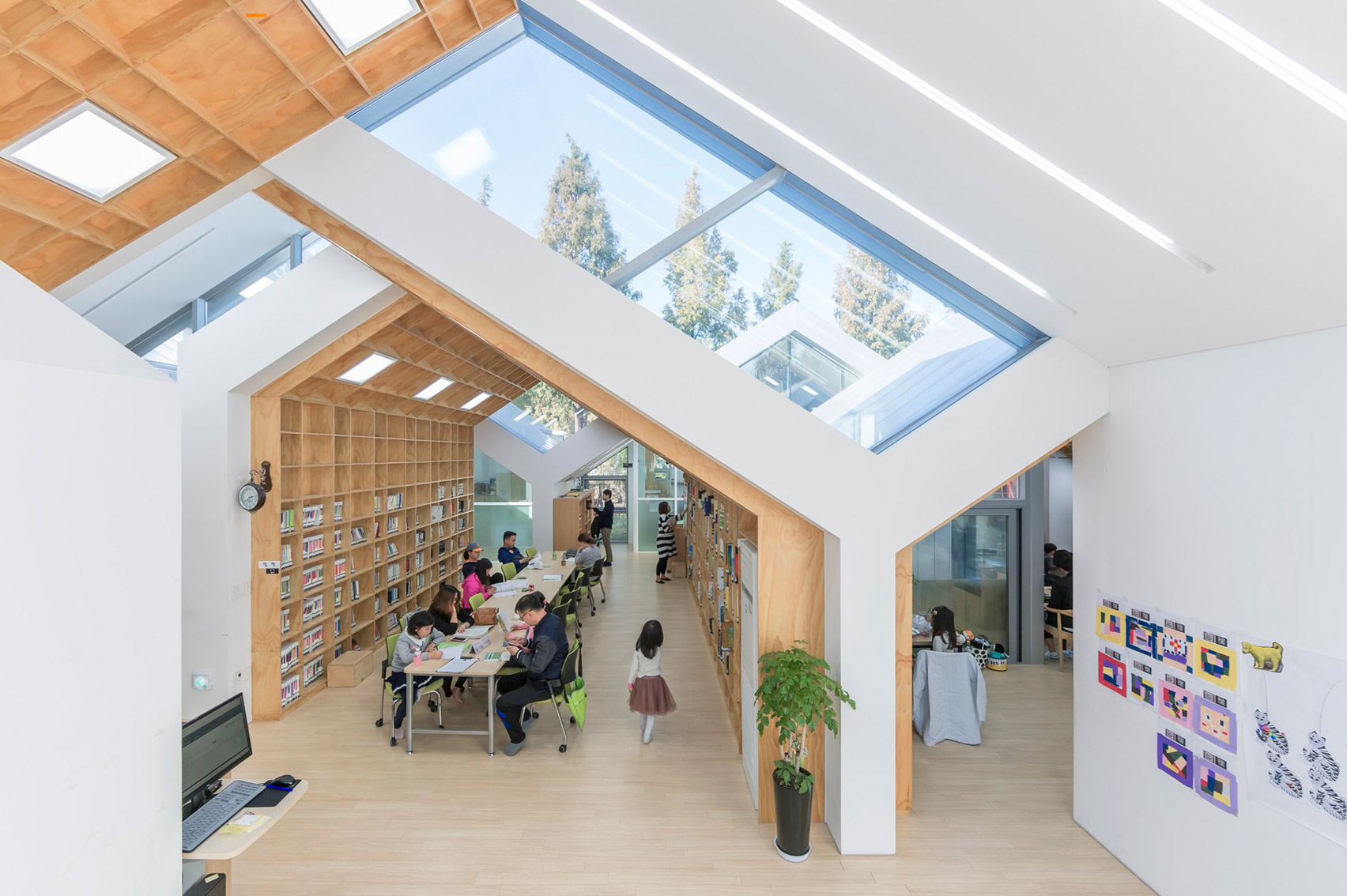 Intersecting gabled volumes symbolise a sense of togetherness, communication and community spirit, as well as creating a unique form that is less dominant than if a single mass was used.

In the elevation facing towards a public plaza, the gable ends are infilled with glazing that allows daylight to pour into the space. Further back, the overlapping forms create additional irregular openings that add to the dynamism of the interior. 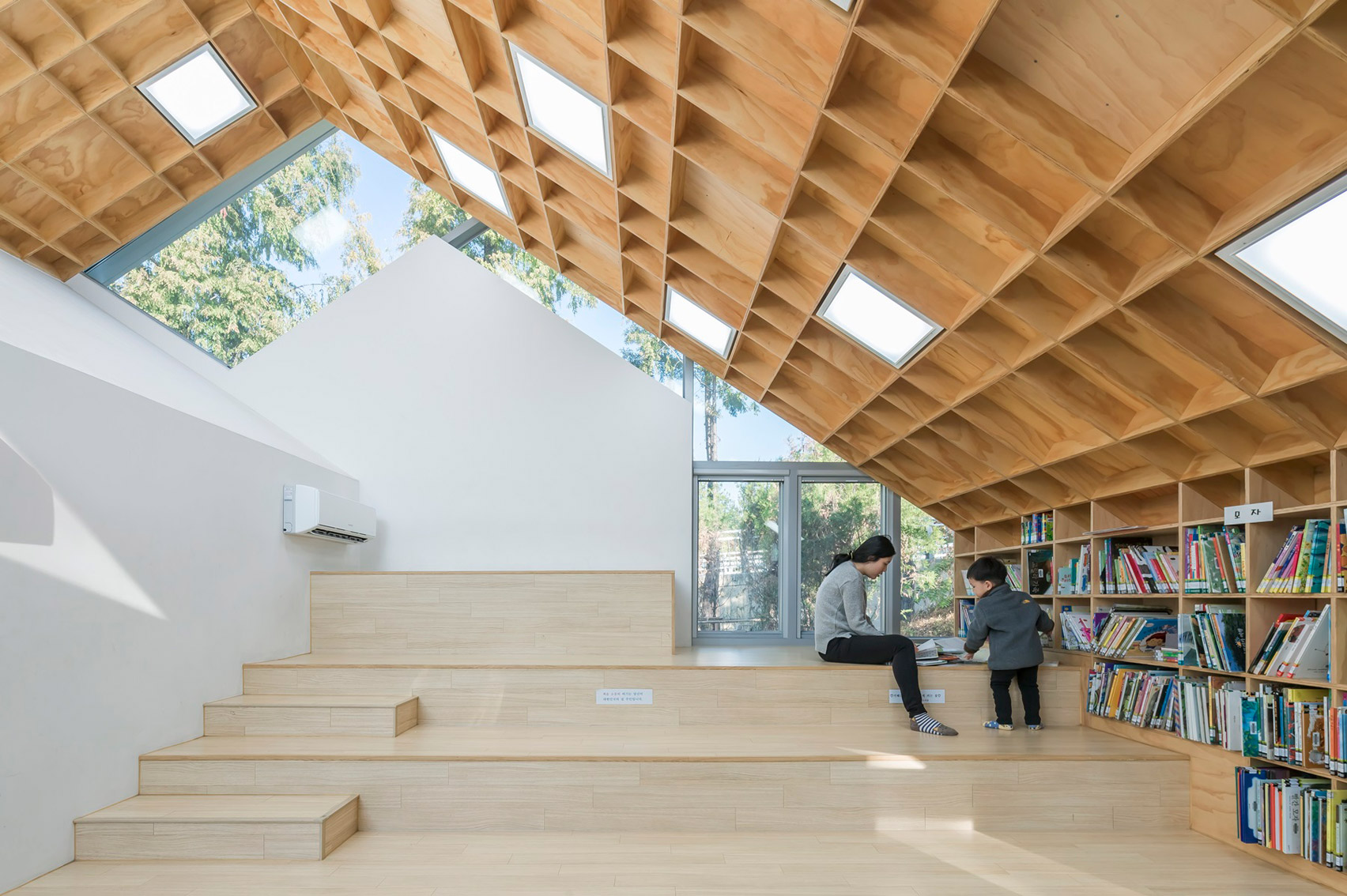 The internal layout is based on a repeating shelving unit that forms the walls and becomes a partition between different zones. These wooden dividers designate space, whilst also providing a consistent element that flows throughout the building.

The shelving system extends across the library’s ceiling, creating spaces that feel warm and intimate. Light panels are incorporated into the ceiling, which varies in height to give each zone a distinct personality. 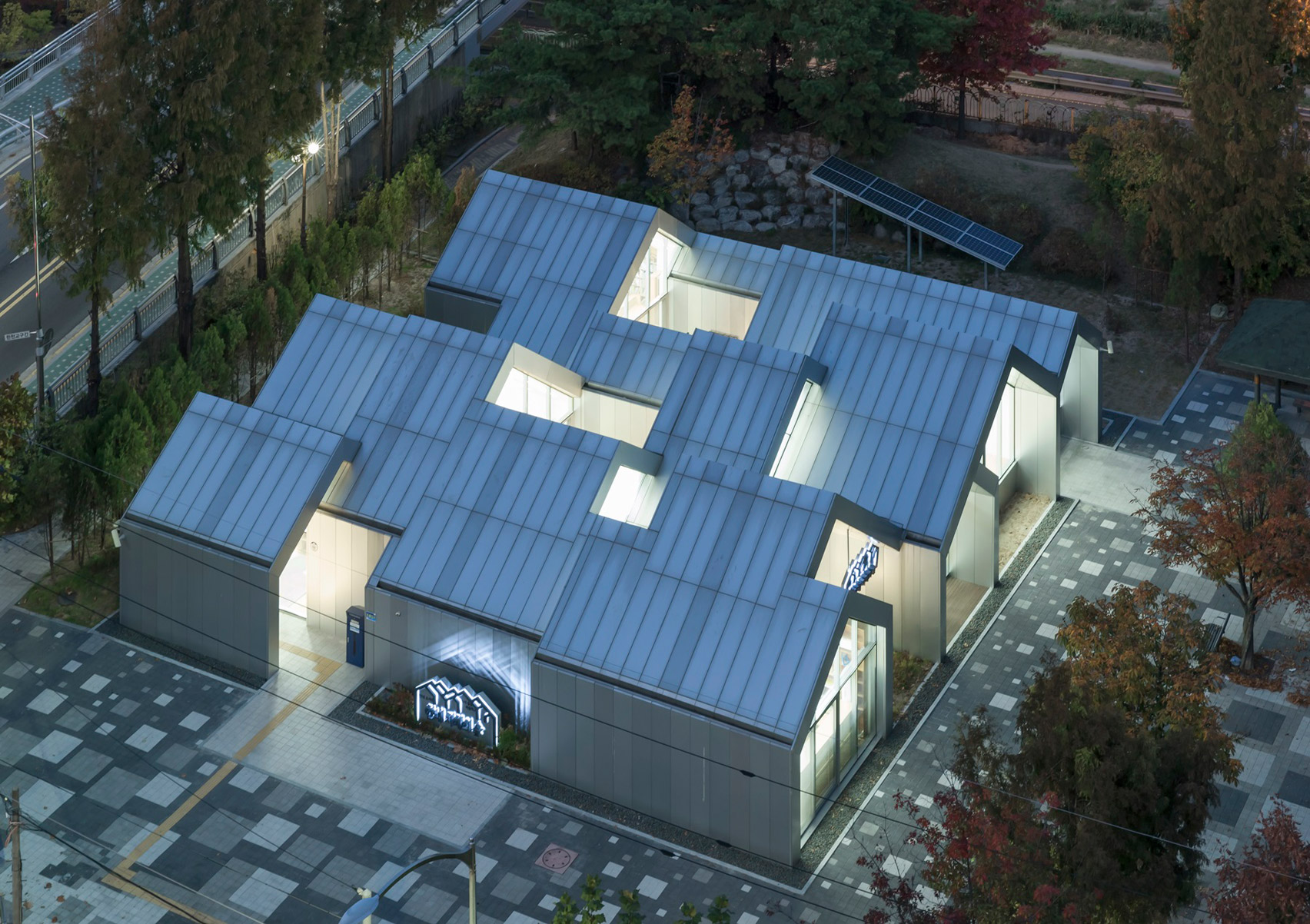 In addition to the workstations and library stacks, the 330-square-metre interior incorporates a pair of enclosed courtyards and stepped seating areas that can be used for talks or events.

Photography is by Sergio Pirrone.

No Footprint House is a prototype prefabricated home in Costa Rica