Cowshed in the Netherlands rebuilt as a timber-clad family home Located on the site of a former farm in the Netherlands , the austere aesthetic of the agricultural structures on the site made the studio feel as if they were “stepping into Vincent van Gough’s painting The Potato Eaters .” 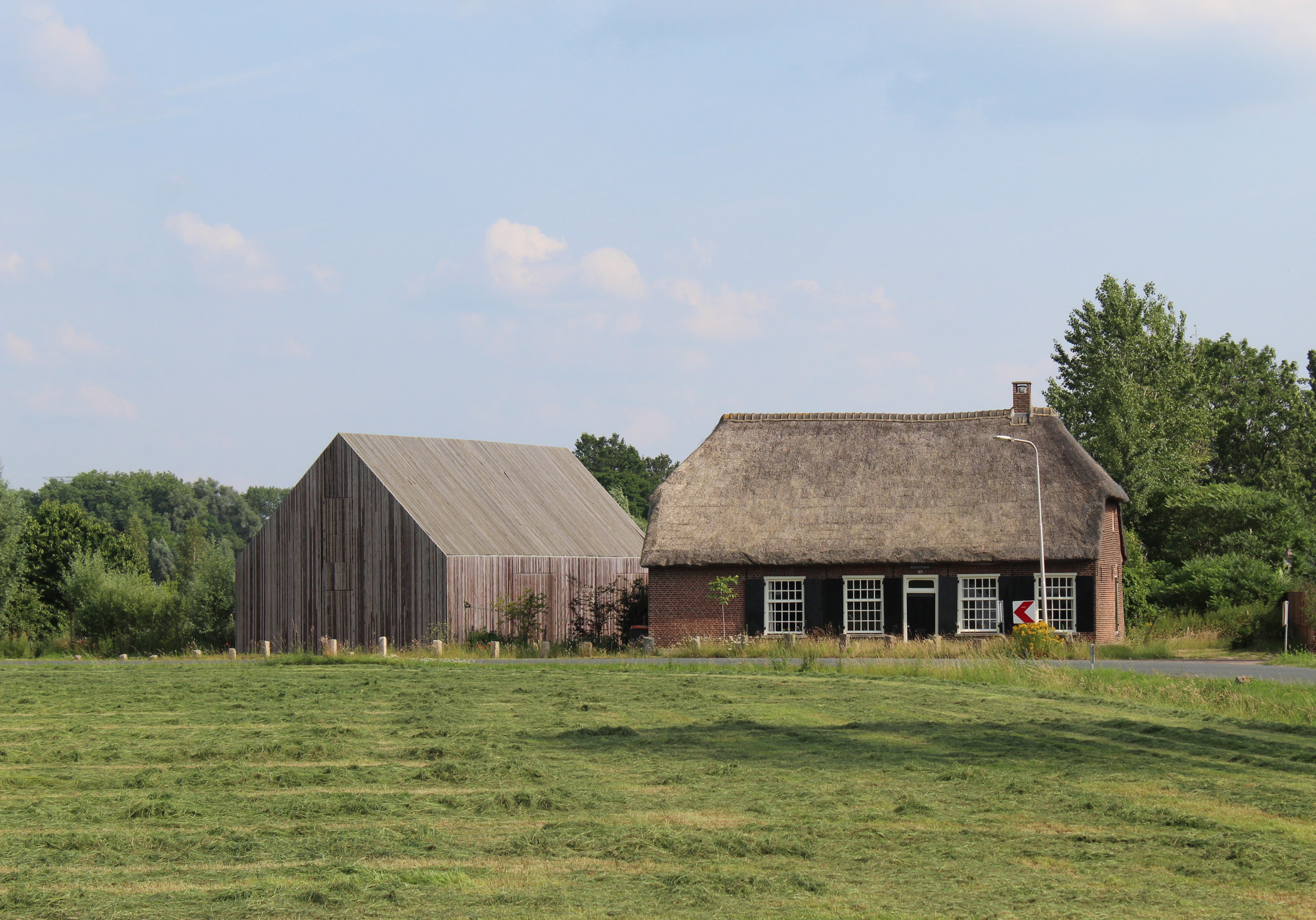 The painting gave the former cowshed its new name – The Potato Shed.

Drawing on the way in which light and air filtered through the old cowshed’s decaying envelope, Julius Taminiau Architects sought out a cladding system that would recreate this feeling and atmosphere. 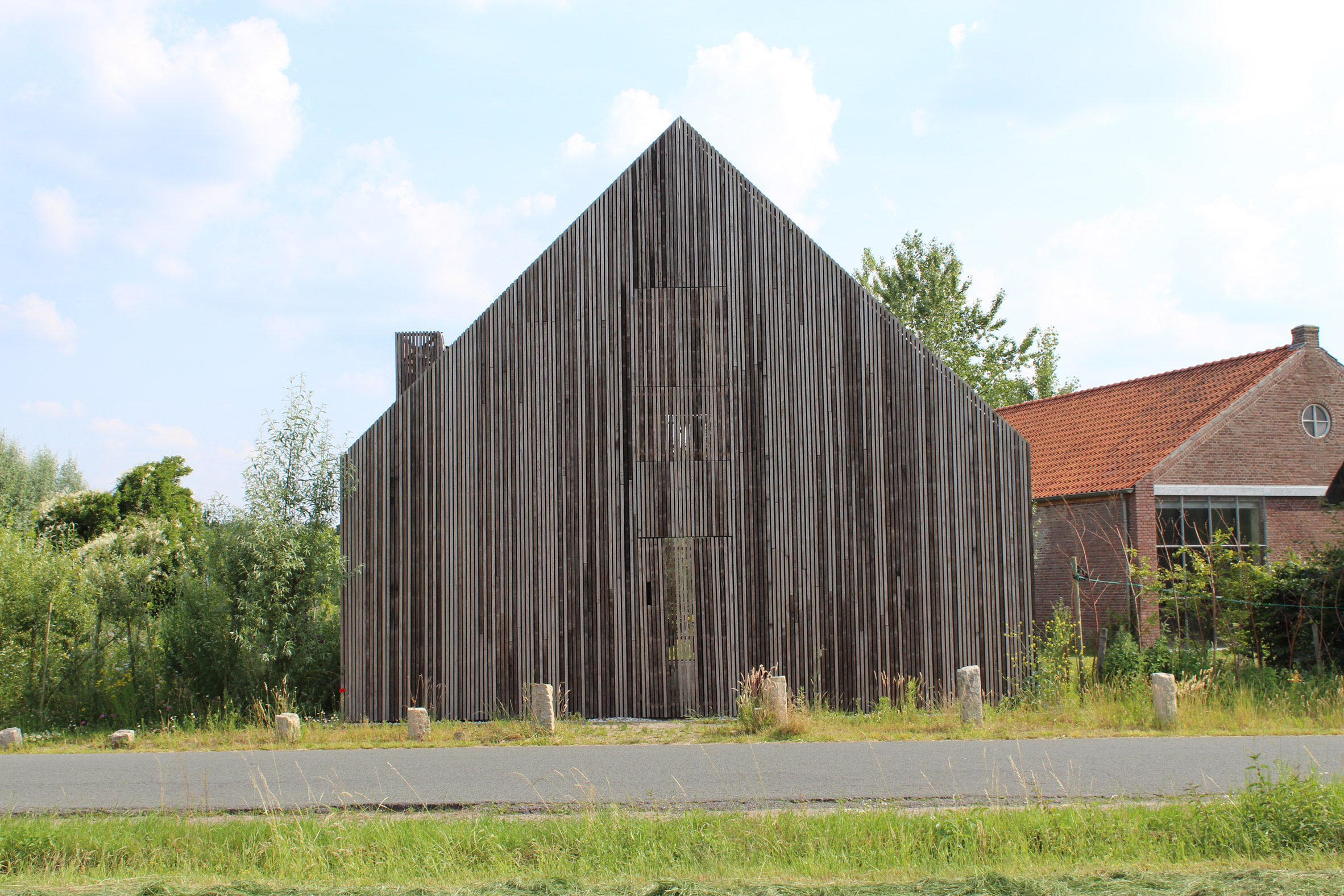 “On a hot sunny afternoon while visiting the site we drank tea in an old part of the timber-clad shed which provided shadow and a nice breeze,” said the studio.

“We experienced an amazing play of lights going through the slim timber slats. This was our ‘eureka’ moment.” 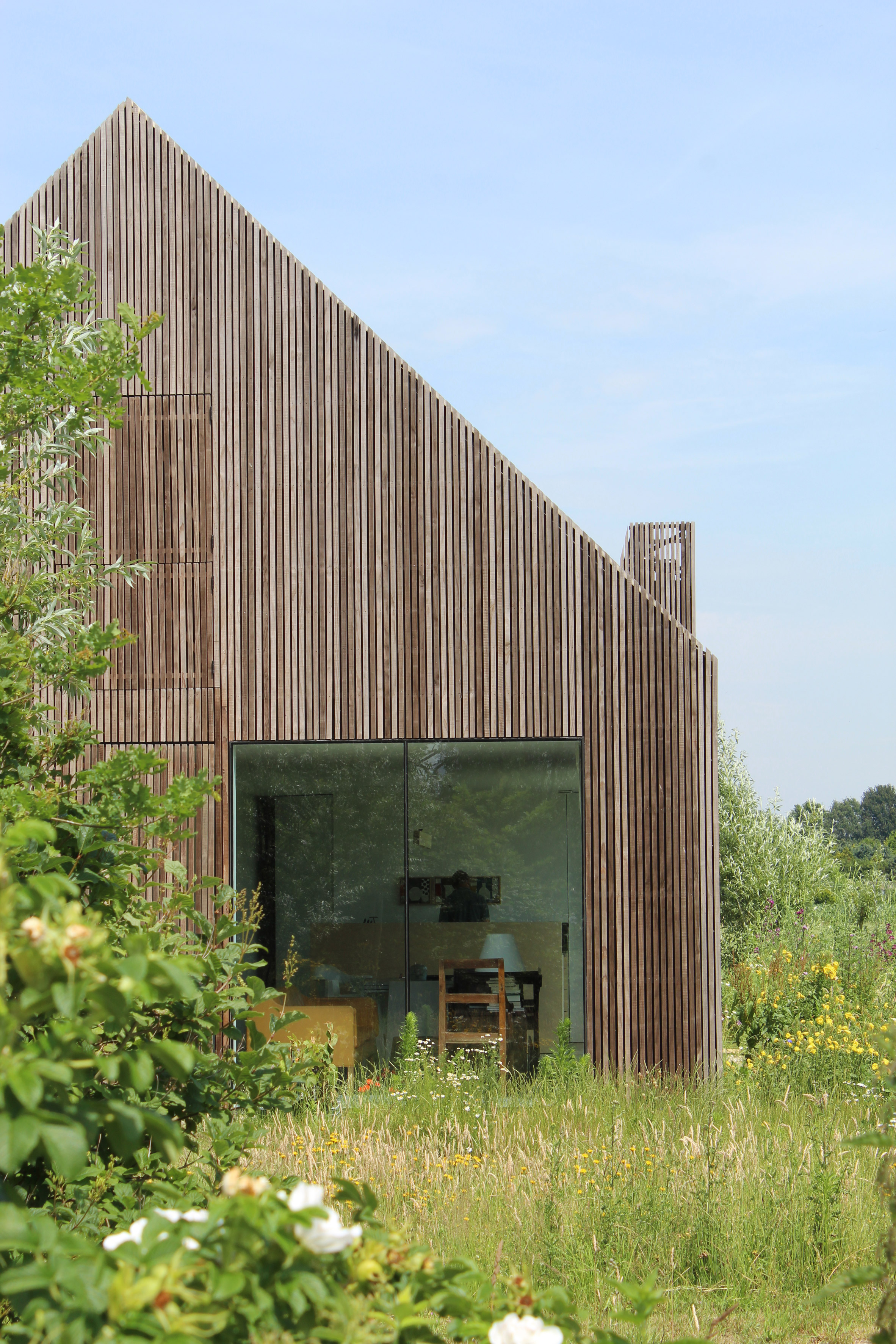 Alongside a guest house in an old farmhouse and an atelier in a former stable, Potato Shed completes an ensemble of structures clustered on a tree-filled landscape.

Only the foundations of the cowshed were retained for the new home. 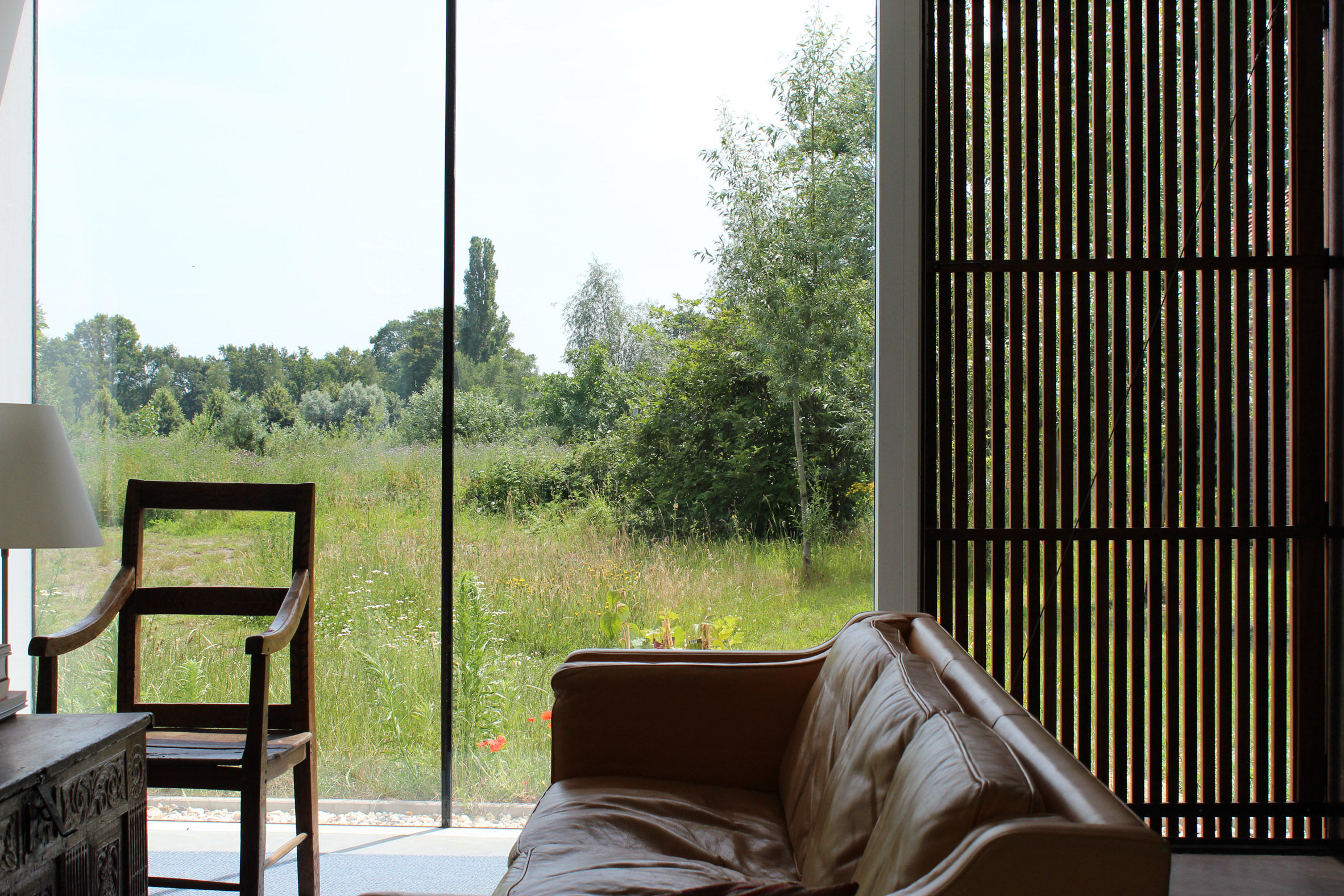 But from the outset the new building was designed to reflect its original character, with a simple, barn-like volume, plain materials and few openings.

“We wanted to maintain the character that defines a typical shed or barn and searched for inspiration in the area,” explained the practice. 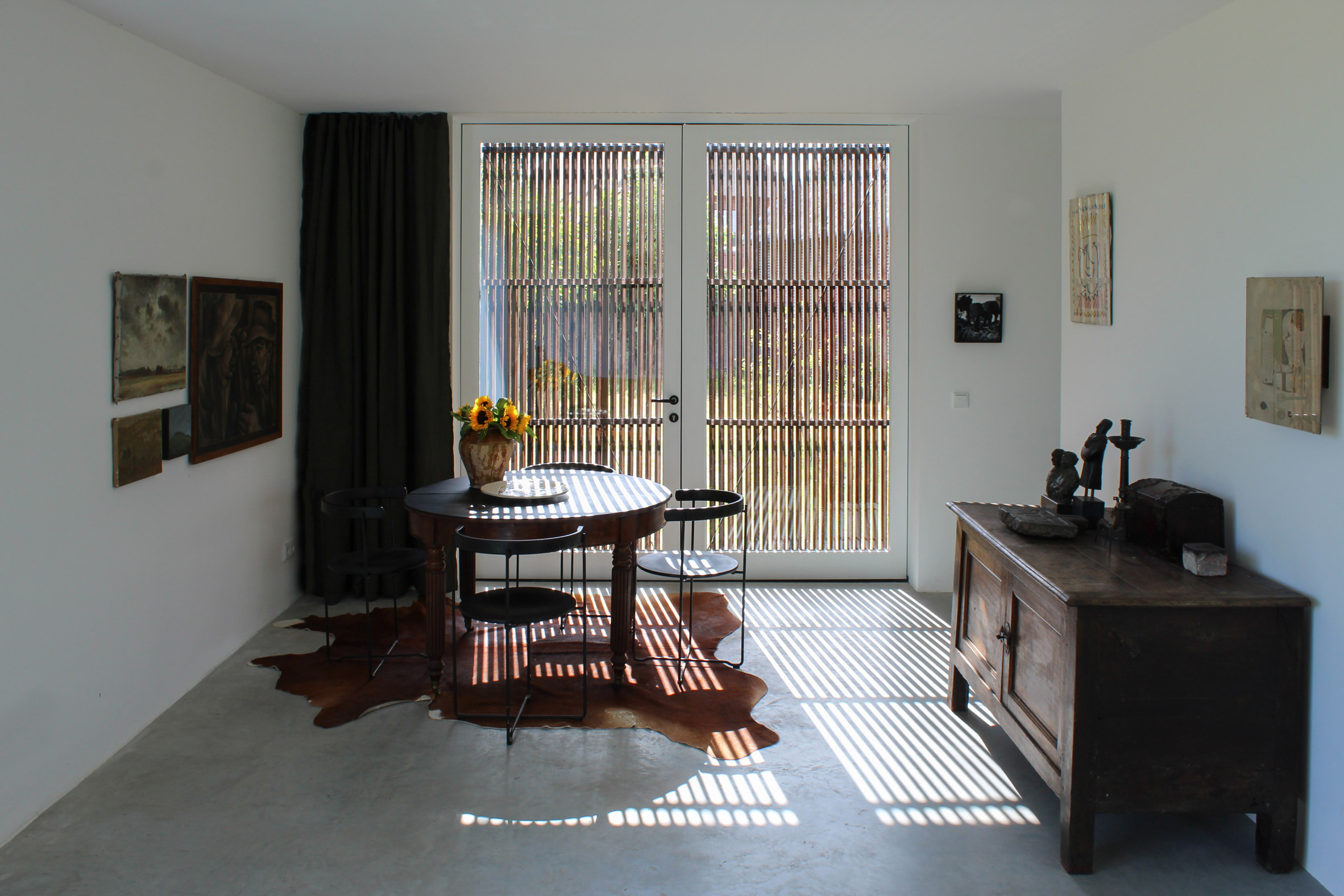 Over two storeys the Potato Shed provides a large living, kitchen and dining area on the ground floor and two bedrooms beneath the pitched roof above.

The floor plan is arranged to be with two large windows looking out towards the surrounding views, contrasting the inward-facing form of the old farmhouse. Alongside these fixed windows, doors and openings have been concealed behind the timber cladding to filter in light and air.

“The door behind the cladding can be opened and used for cross ventilation in summer and the concealed doors can be opened or closed to prevent animals or unwanted people getting inside,” said the studio. 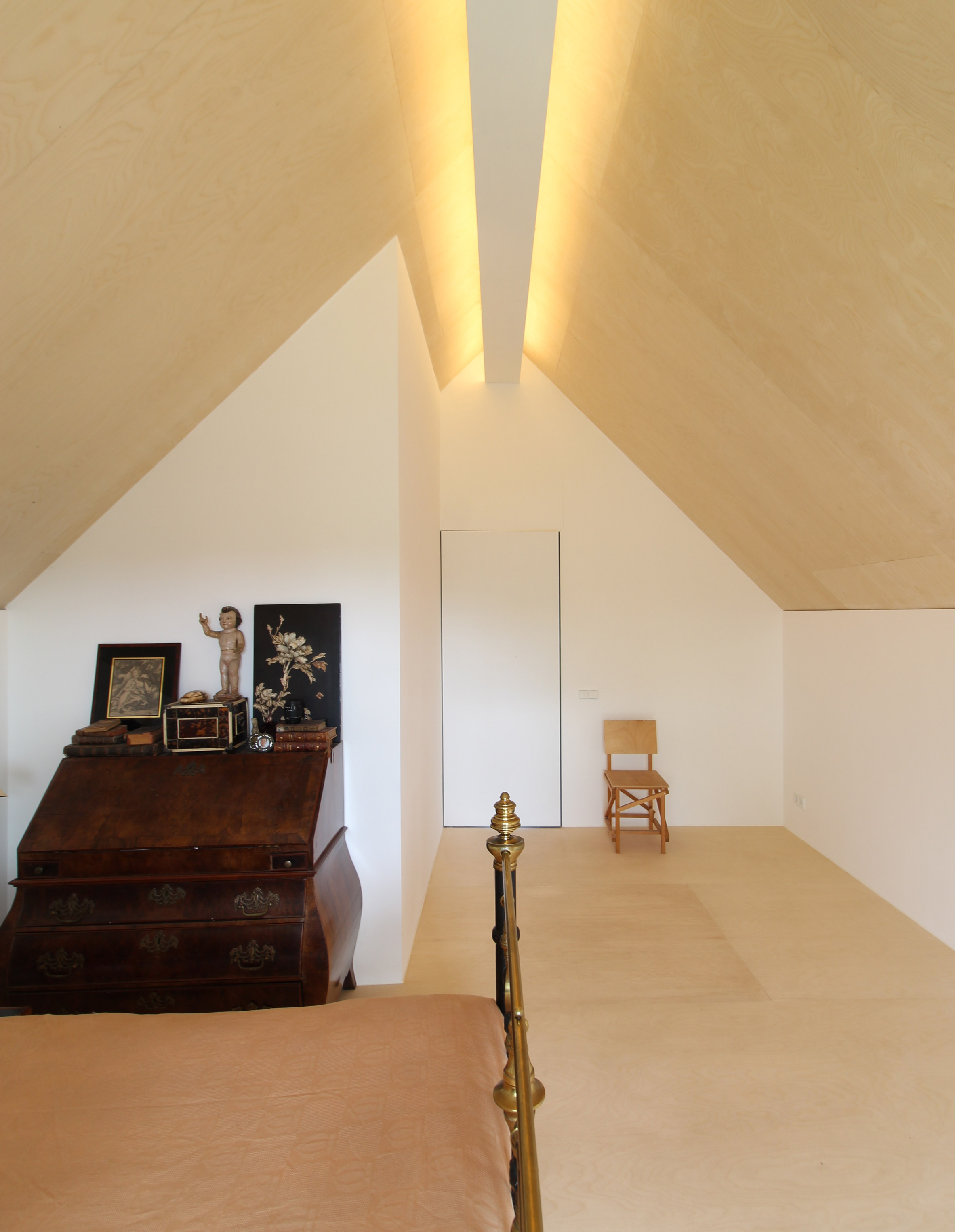 Upstairs, spaces are less exposed to the landscape, with windows at either end of a central corridor leading to warm, plywood-lined rooms.

In order to remain in-keeping with the style of the rest of the home, a chimney for a fireplace in the living room has been given the same treatment as the rest of the facade, wrapped by timber slats.

Julius Taminiau Architects, which is based in Amsterdam, has previously designed a temporary shipping container village for startups , and a floating houseboat with space-saving features .

Photography is by Norbert Wunderling.

The post Cowshed in the Netherlands rebuilt as a timber-clad family home appeared first on Dezeen .