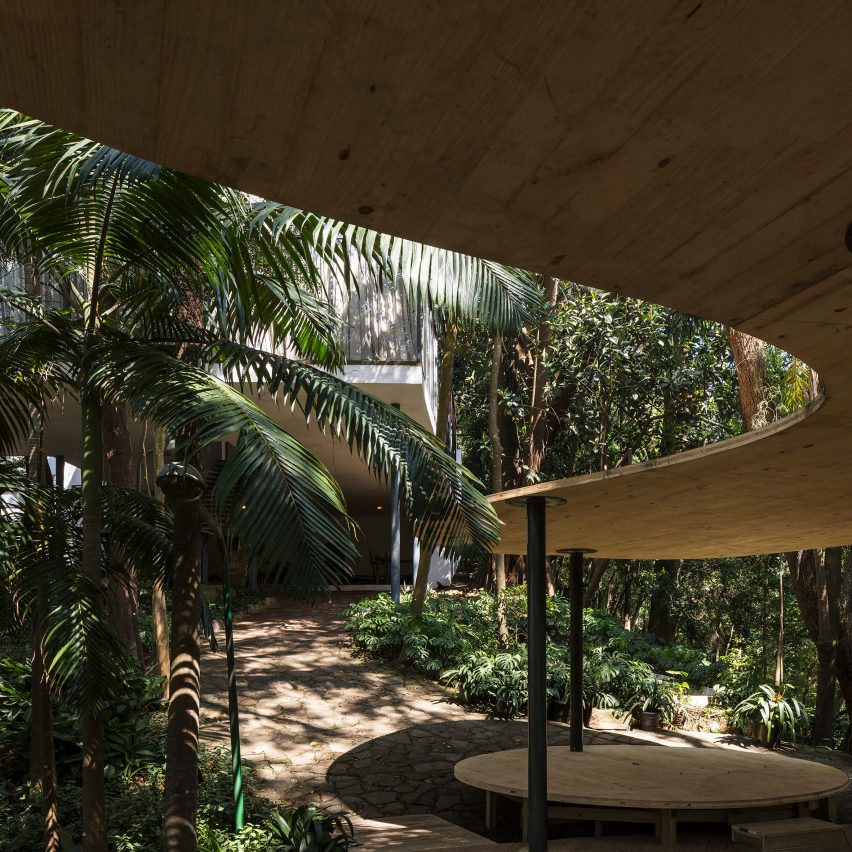 Camacho, whose firm RADDAR is based in São Paulo and Mexico City, completed the Summer House among the 7,000-square-metre gardens that surround Bo Bardi’s Casa de Vidro, or Glass House. 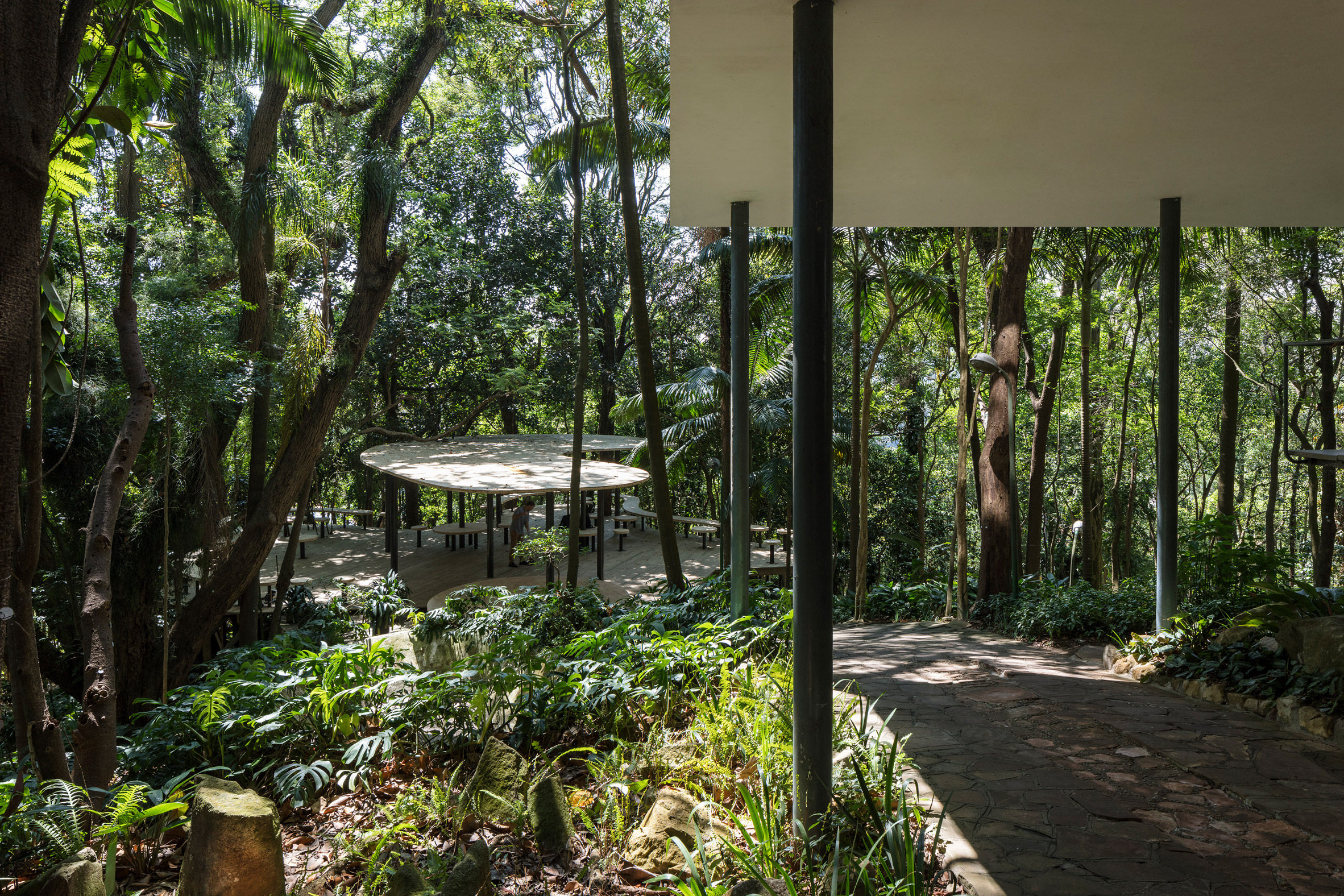 Located in São Paulo’s Morumbi neighbourhood, the property was completed in 1950 as the architect’s first built work. It provided the home for her and her husband, the Italian writer, curator and collector Pietro Maria Bardi.

With its simple concrete and glass form, and slender pilotis, it is celebrated today a key example of Brazilian modernism, and regularly visited by tourists. 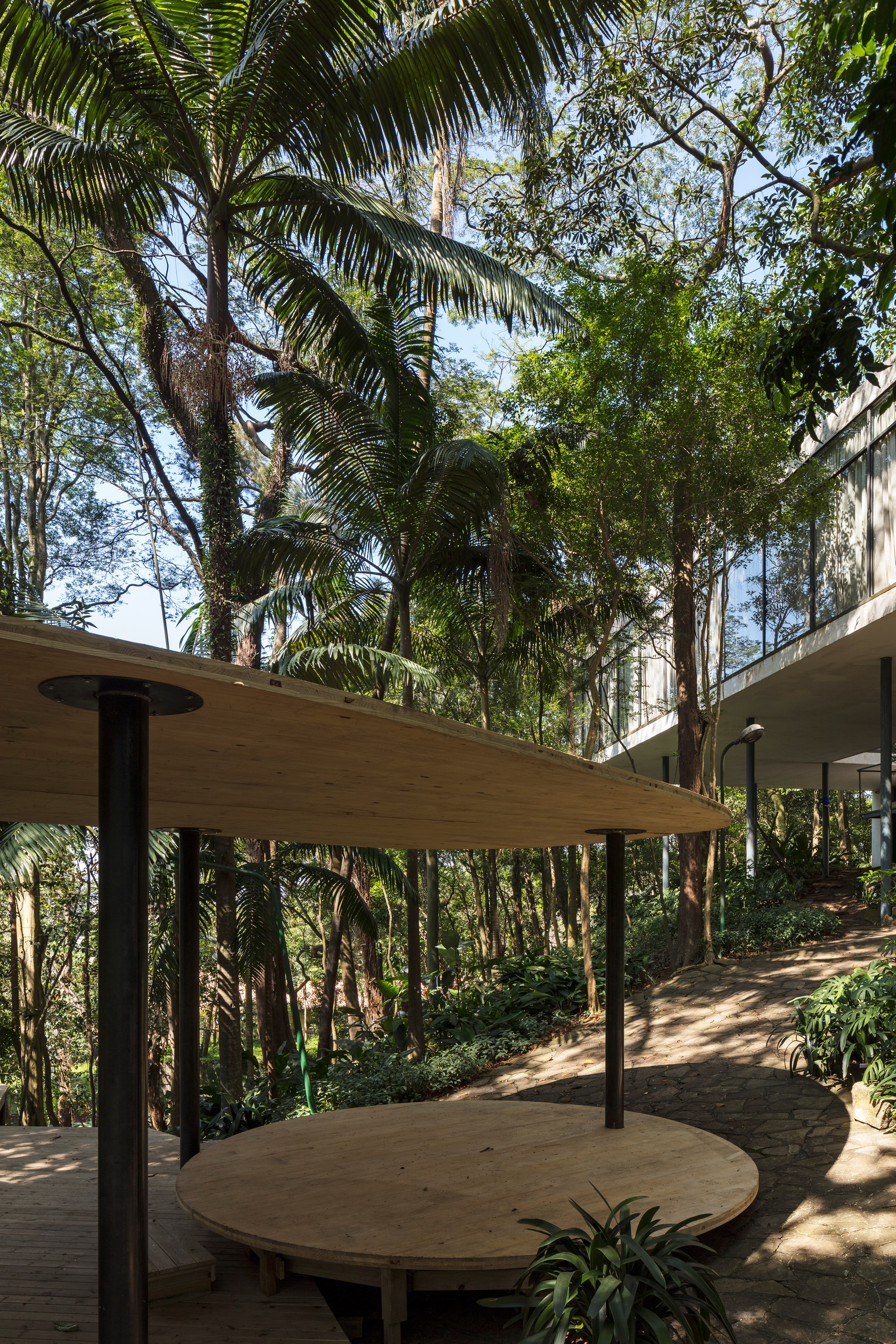 Camacho’s temporary structure provides a shelter for these visitors to enjoy coffee, lunch and the surrounding gardens during Brazil’s warmer months. It opened on 15 December 2018 and will remain on site until 23 March 2019.

Following the principles of its revered modernist neighbour, and with no outer walls so it remains open to the outdoors, the design comprises slender columns that support a slim flat roof.

The main structure is wooden, blending in with the forested backdrop, and is shaped in curves to manoeuvre around the gardens. 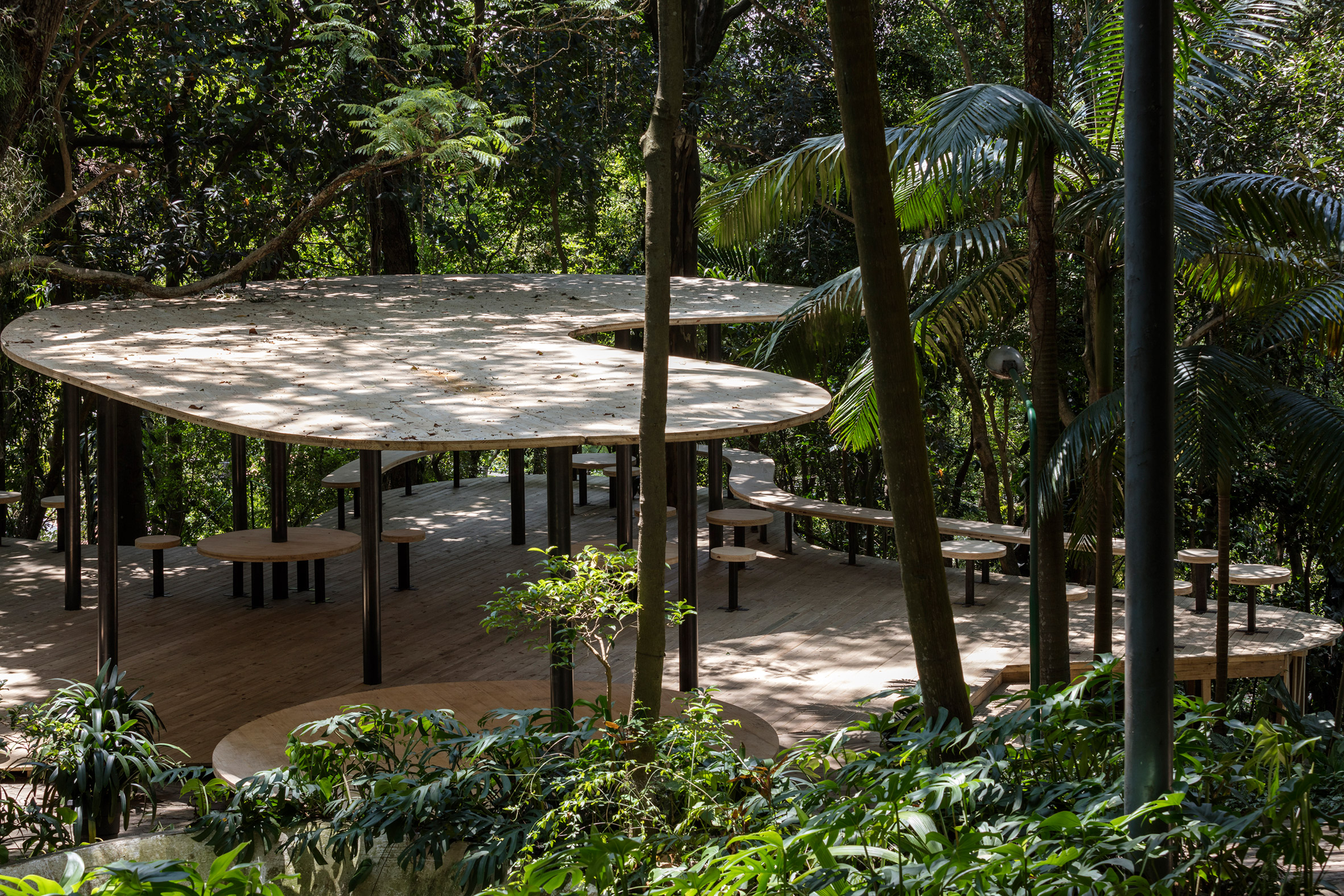 Originally the remnants of Mata Atlantica – the rainforest that once surrounded São Paulo – the site was transformed by Bo Bardi over the years to feature tropical greenery, and stone and ceramic paths – all forming key parts of the property. A pocket of the forest grows straight up through the interior of Glass House.

“Lina thought and designed her house in total interaction with nature,” said Camacho. “She created, planted and took care of the garden of the Glass House.”

“The garden and the house complement each other,” she added. “The pavilion had to follow this idea”. 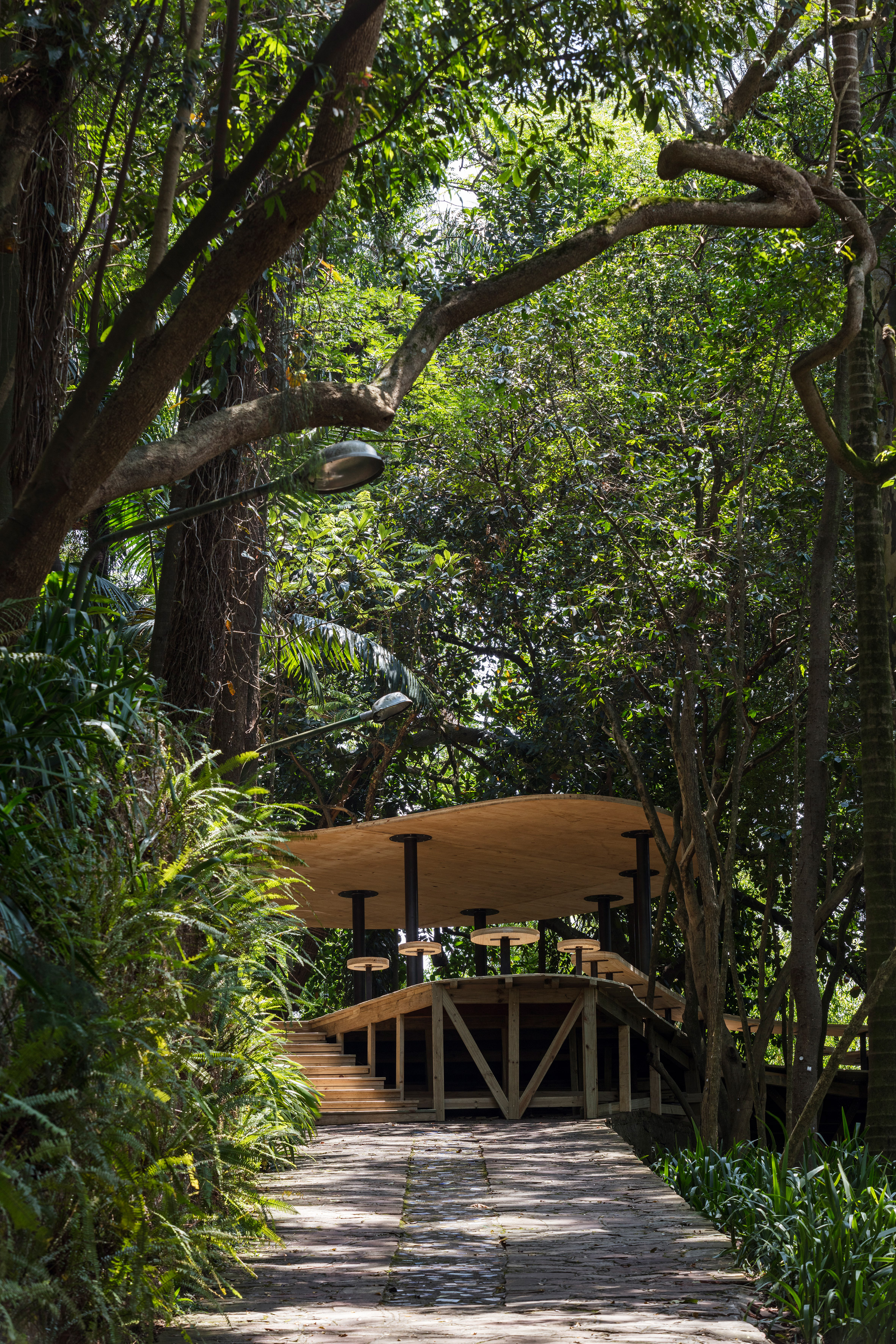 The pavilion’s bean-shaped roof provides shelter for stools and tables built around the columns underneath. The wooden base extends beyond the perimeter of the roof, creating open areas beneath the tree canopy with curvy seating.

Camacho elevated the platform of the pavilion above the ground on wooden struts to navigate the extensive planting. A staircase links a stony pathway on the lower level to the entrance, and the house beyond. 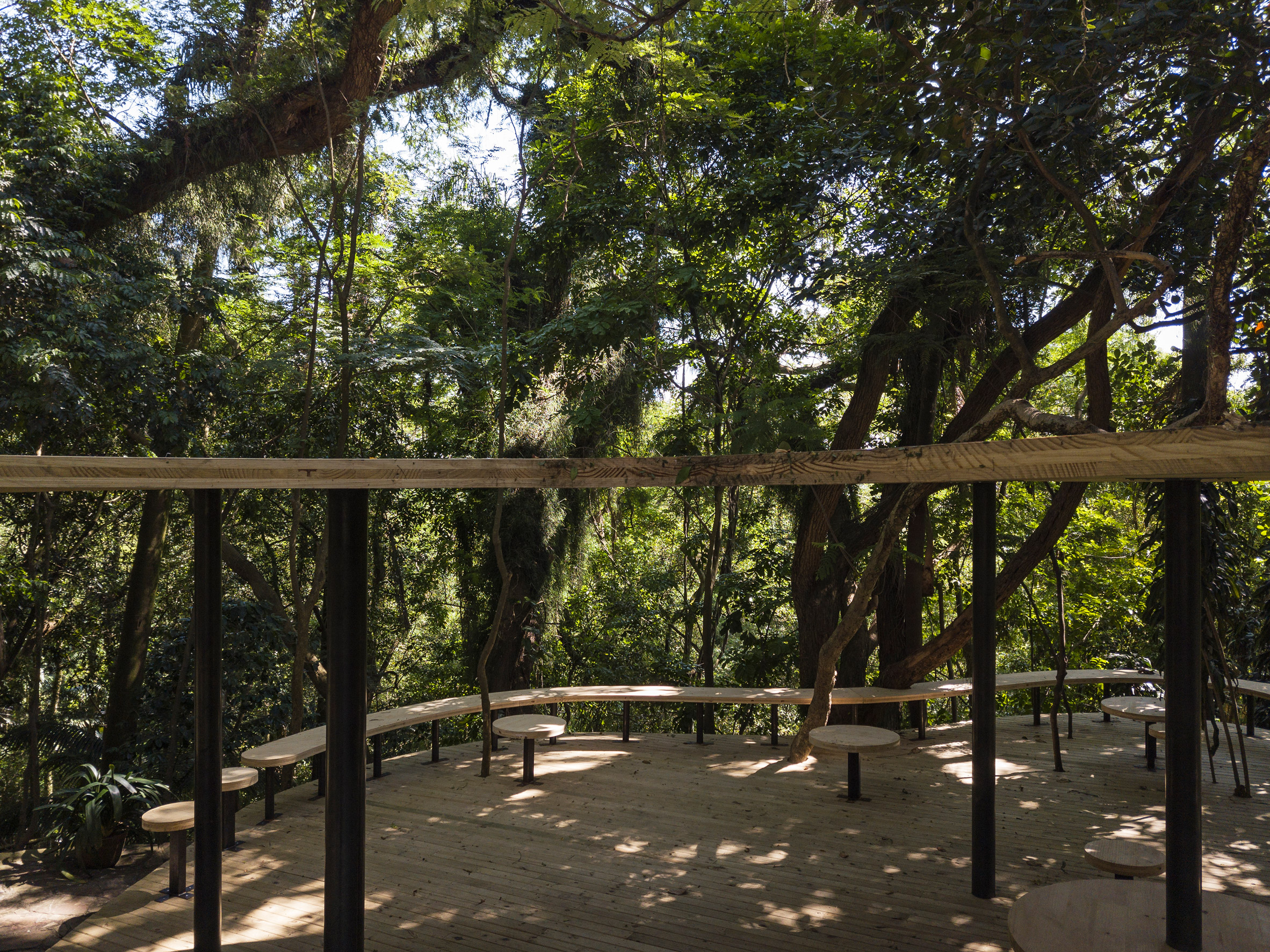 To create the unusual wooden shapes of the pavilion, Camacho used cross-laminated timber – a material produced by layering three, five or seven timber sections of wood at right angles, then glueing them together.

Commonly known as CLT, it can be prefabricated in a factory to any shape or dimension, and is much lighter than steel and concrete counterparts, making it a popular choice for projects in the US and Europe.

Camacho said it is rarely used in Brazil, and that the Summer House provides one of the first demonstrations of the material’s advantages in the country. 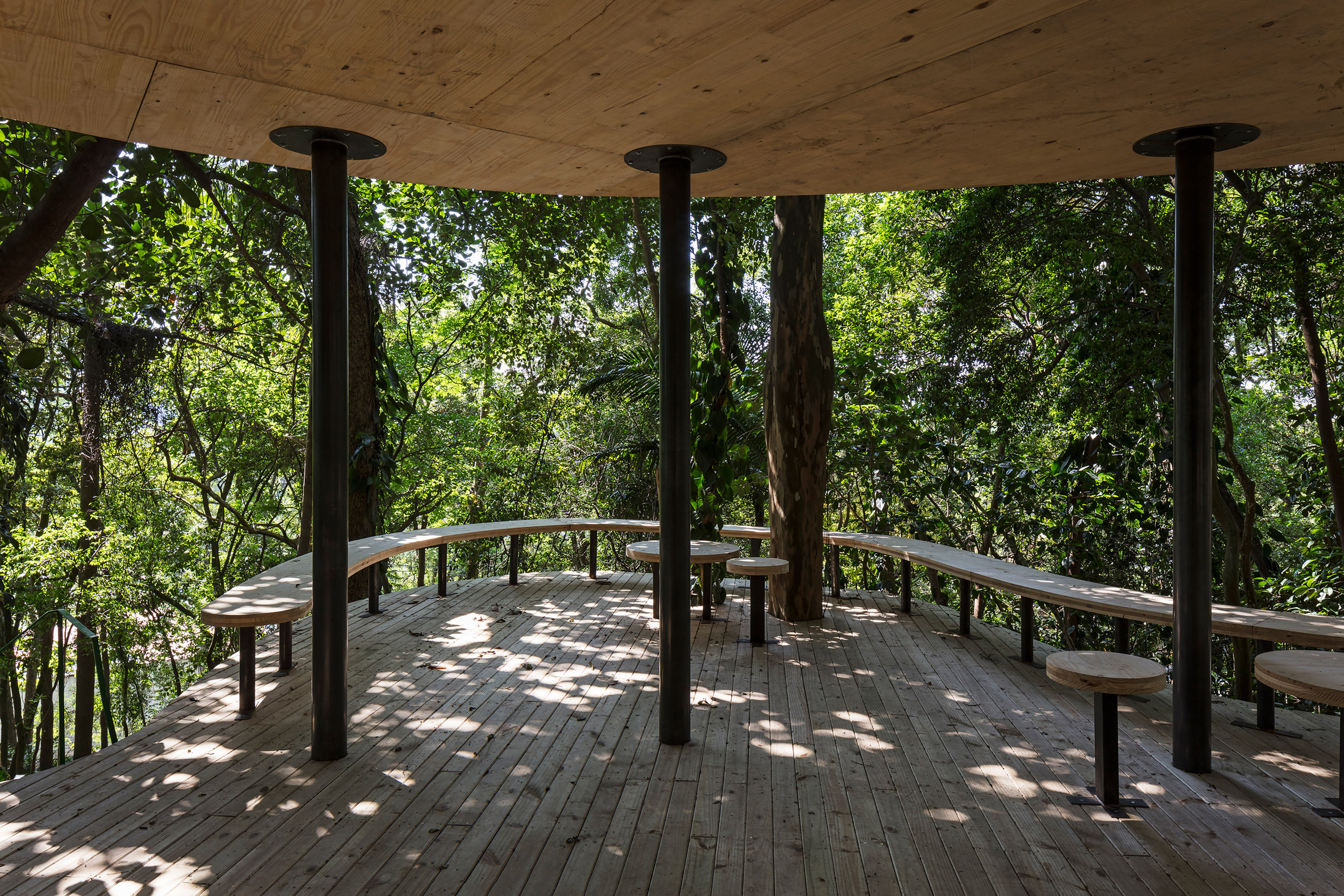 “Casa de Vidro is one of the few cultural institutions in Sao Paulo that speaks, exhibits and promotes the conversation about contemporary architecture; the idea of building the pavilion with CLT had a clear intention to speak about new materials and possibilities of construction in the Brazilian context,” said the architect.

Lina Bo Bardi and Pietro Maria Bardi – who were born in Italy and moved to Brazil together in 1946 – lived in Glass House for 40 years. During their residence, the property provided the meeting point for artists and architects, with Max Bill, Emily Steinberg, Gio Ponti and Alexander Calder all reportedly attending. 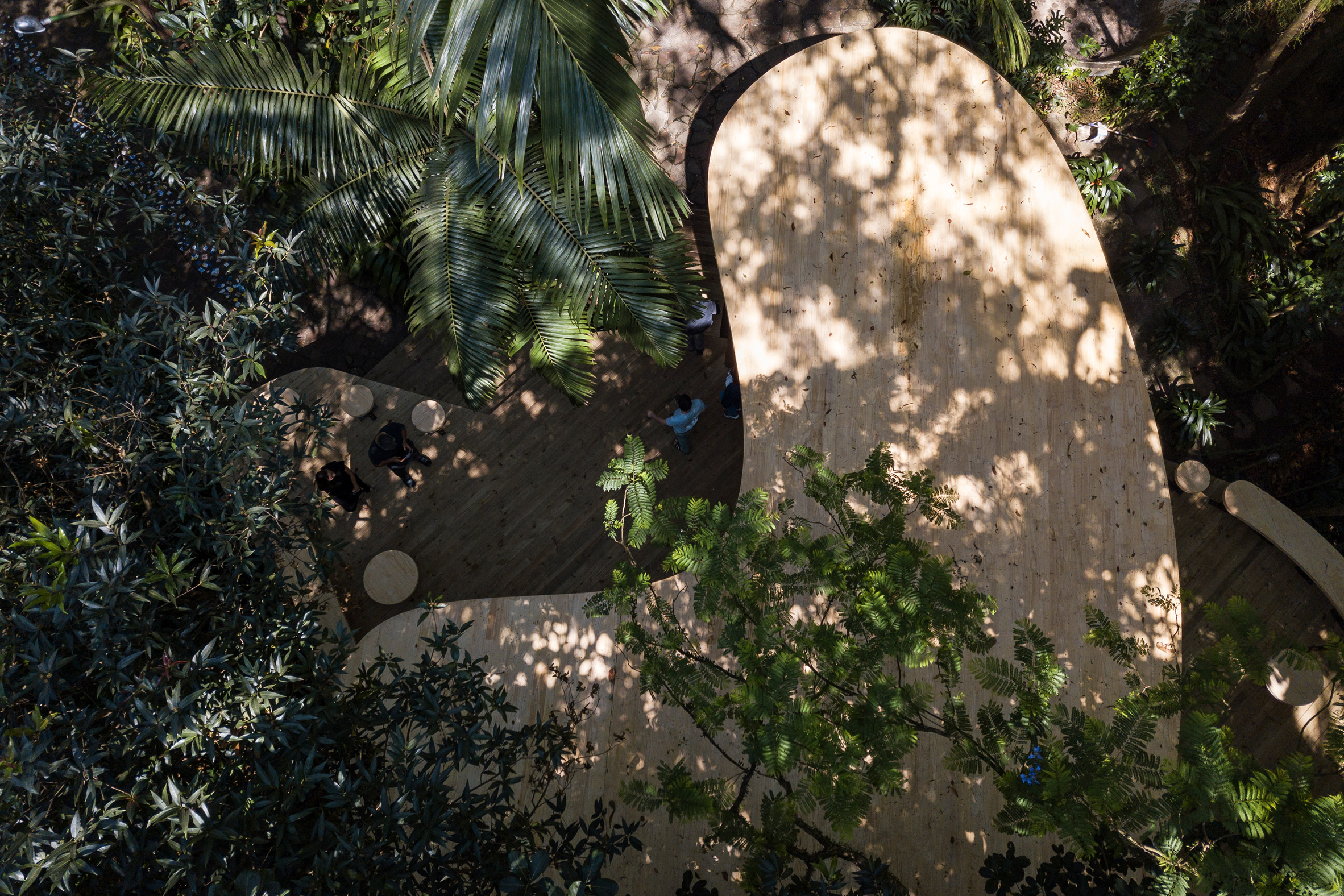 As key figures in Brazil’s cultural scene, the Bardis established the Instituto Lina Bo e PM Bardi in 1990 to promote the study of the country’s architecture and culture. Following their deaths in 1992, the Glass House has continued to act as the headquarters of the institute and hosts public programme events.

The Summer House was instigated as part of this initiative to support seasonal activities. 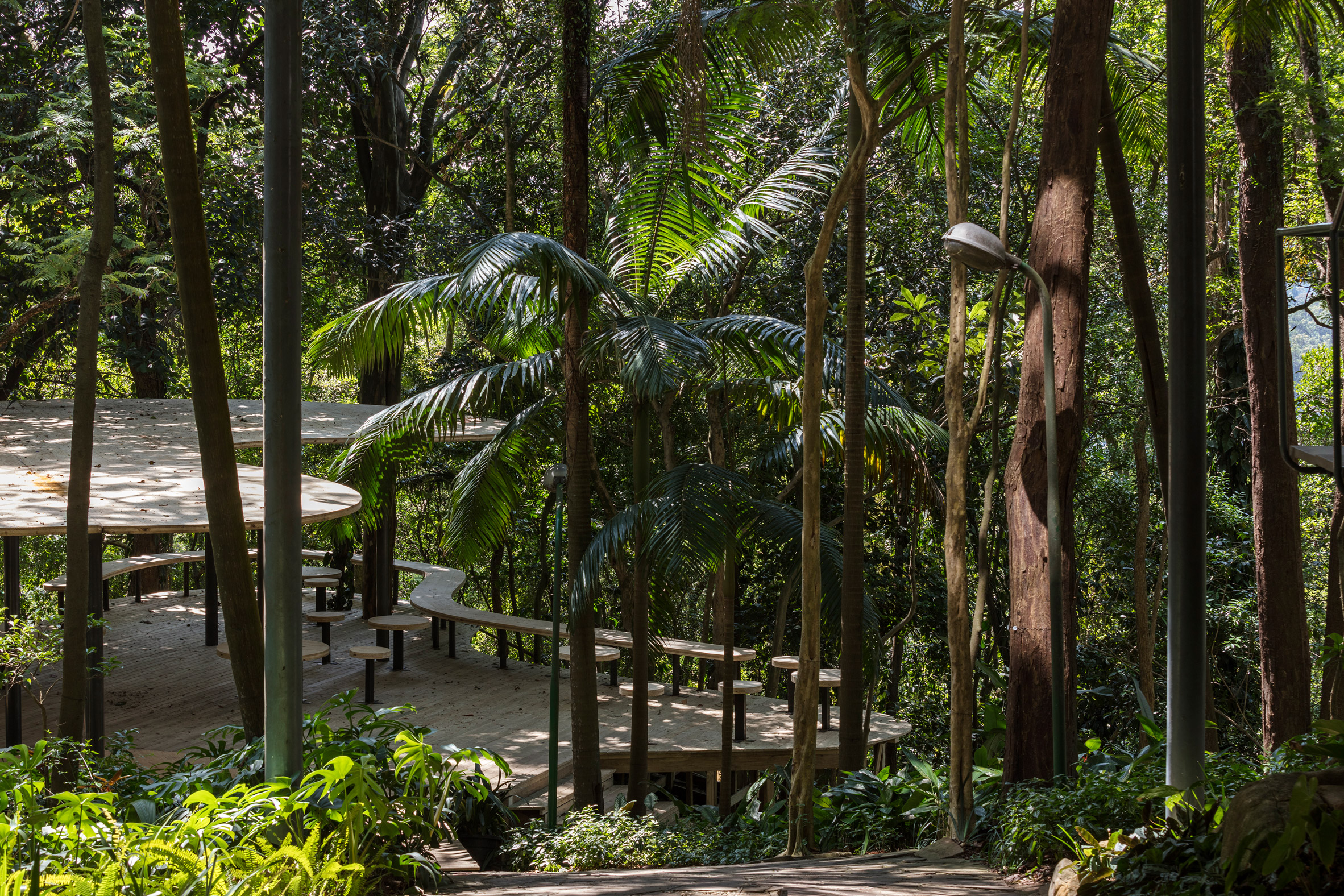 Bo Bardi, one of the most celebrated architects from Brazil’s modernist architecture movement, has only recently become more widely recognised. This has prompted the revival of her product designs, including a door handle from Glass House and a bowl-shaped chair she designed in 1951.

Photographer Leonardo Finotti also documented eight of the architect’s most important buildings to mark what would have been her 100th birthday in 2014, while the following year the São Paulo Museum of Art revived the architect’s “radical” glass easels for an exhibition of Brazilian art.

Photography is by Leonardo Finotti.