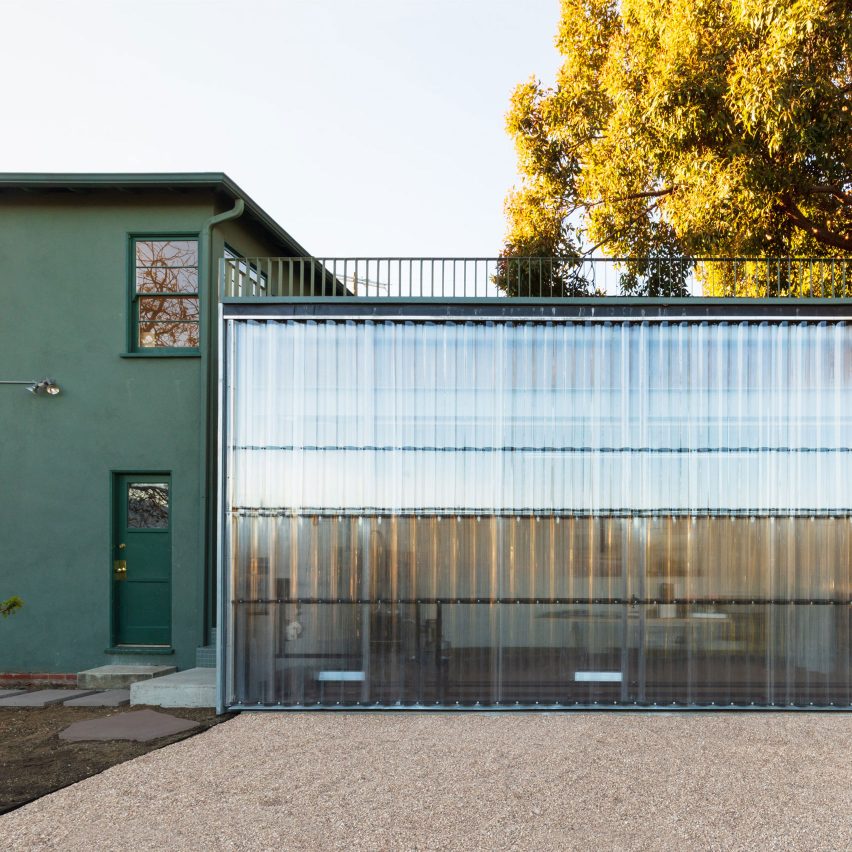 This artist’s studio, which architecture firm FAR has added to a Los Angeles house, includes a large plastic door that folds in half and a rooftop covered in blue tiles. 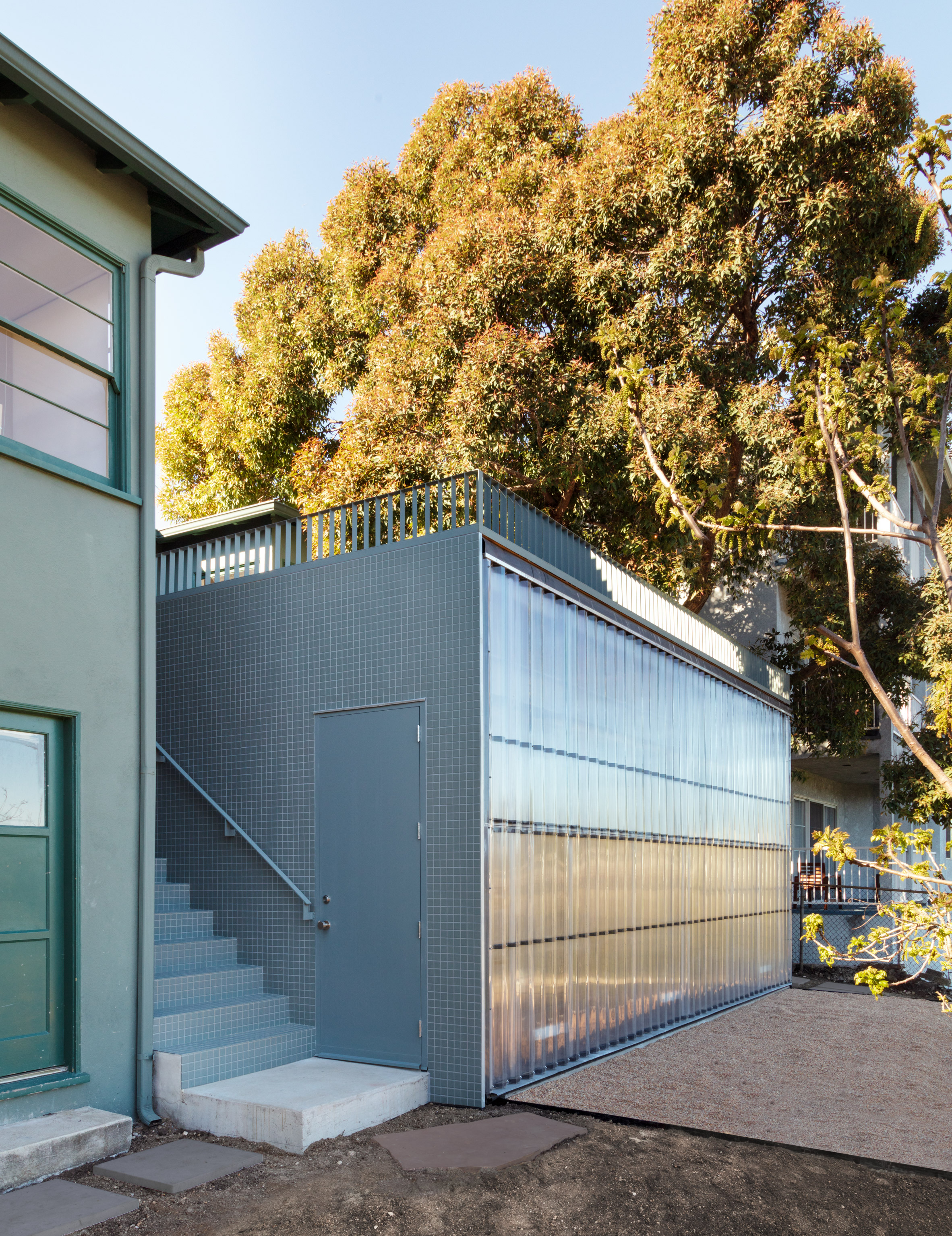 FAR , which stands for Frohn and Rojas, added the workspace to adjoin the lower level of the two storey residence, which just contains storage. The main house occupies just the top floor, and so now links with the deck to allow for outdoor dining with views of the nearby Angeles National Forest. 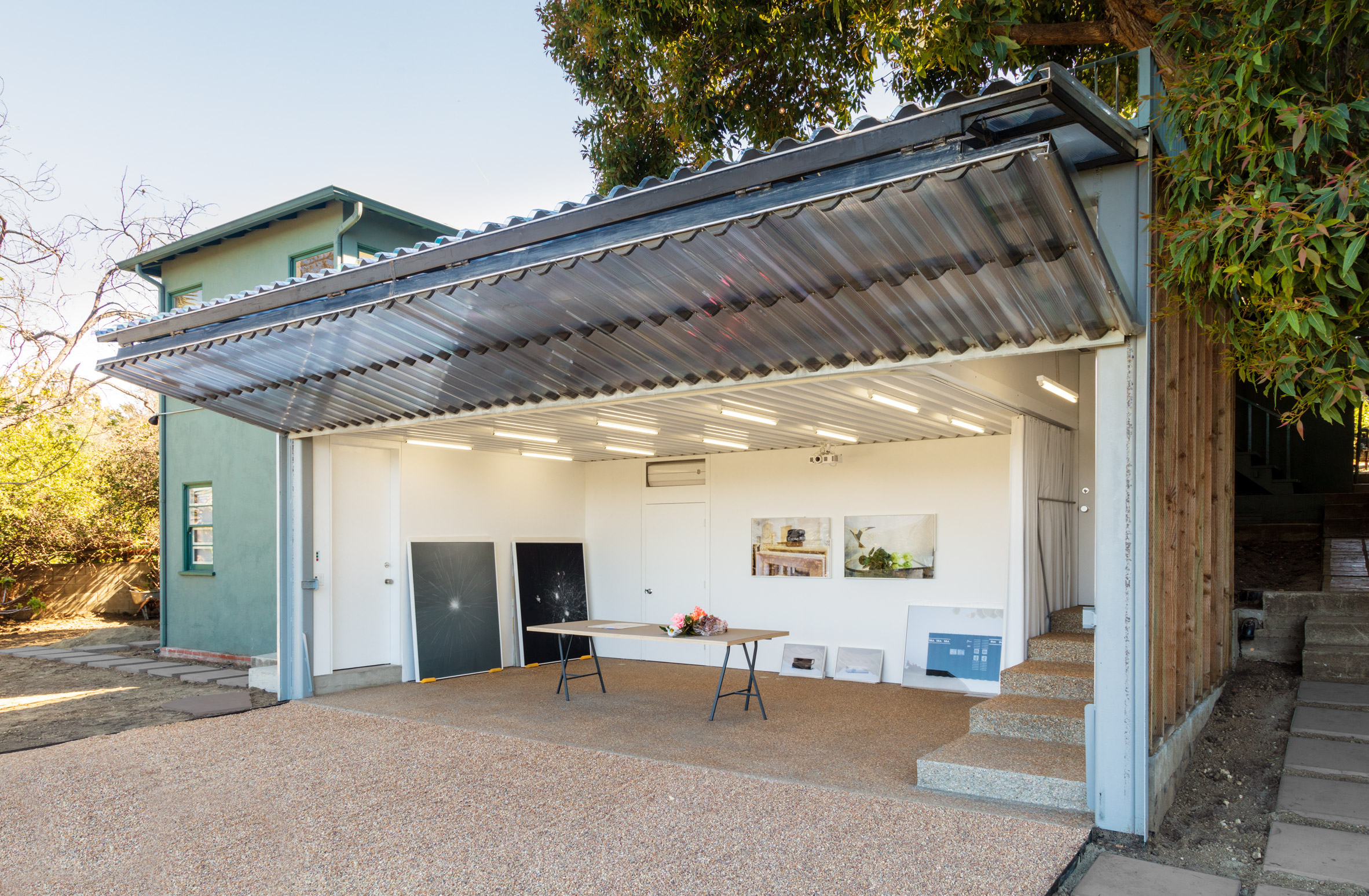 “Taking advantage of the slope we located the studio a full level below the ground floor of the existing home so that its roof surface could double as a spacious deck,” the architects said.

A bi-folding garage-like door, made from an inner layer polycarbonate and an outer later of corrugated plastic, fronts the studio space.

The hatchway operates on a series of hinges that collapse the two pieces shut to form a canopy-like roof. When pulled fully down, the door’s rigid texture distorts the view of scenery.

“Its corrugated and twin-wall layers offer a fine vertical linear pattern abstracting the silhouette of the landscape outside,” the architects added. “Opened up the door folds into a canopy orienting the studio to the outside and framing a panoramic view of the surrounding hills.” 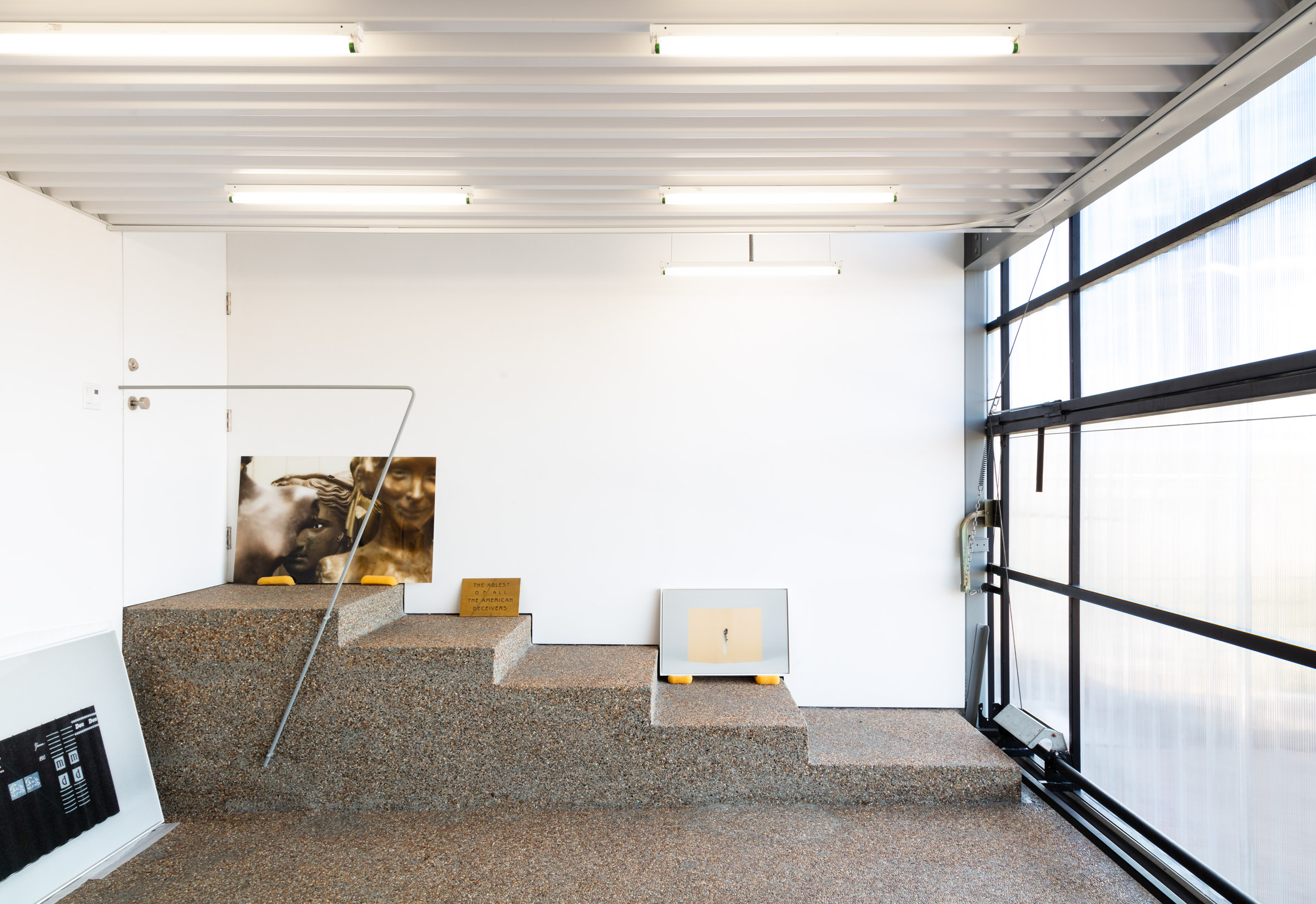 Inside, the open space is topped by a series of slender tubular light fixtures that hang from above and exposed ribbed ceiling.

Brown gravel is laid on the floor extends into the space from the outside. For the studio, the architects covered the stones in a see-through plastic sheet that acts as a protection. The pebbles are also moulded into a set of steps that lead up to new rooftop.

Other features of the interior include two additional doorways that provide access to the main residence and outside. 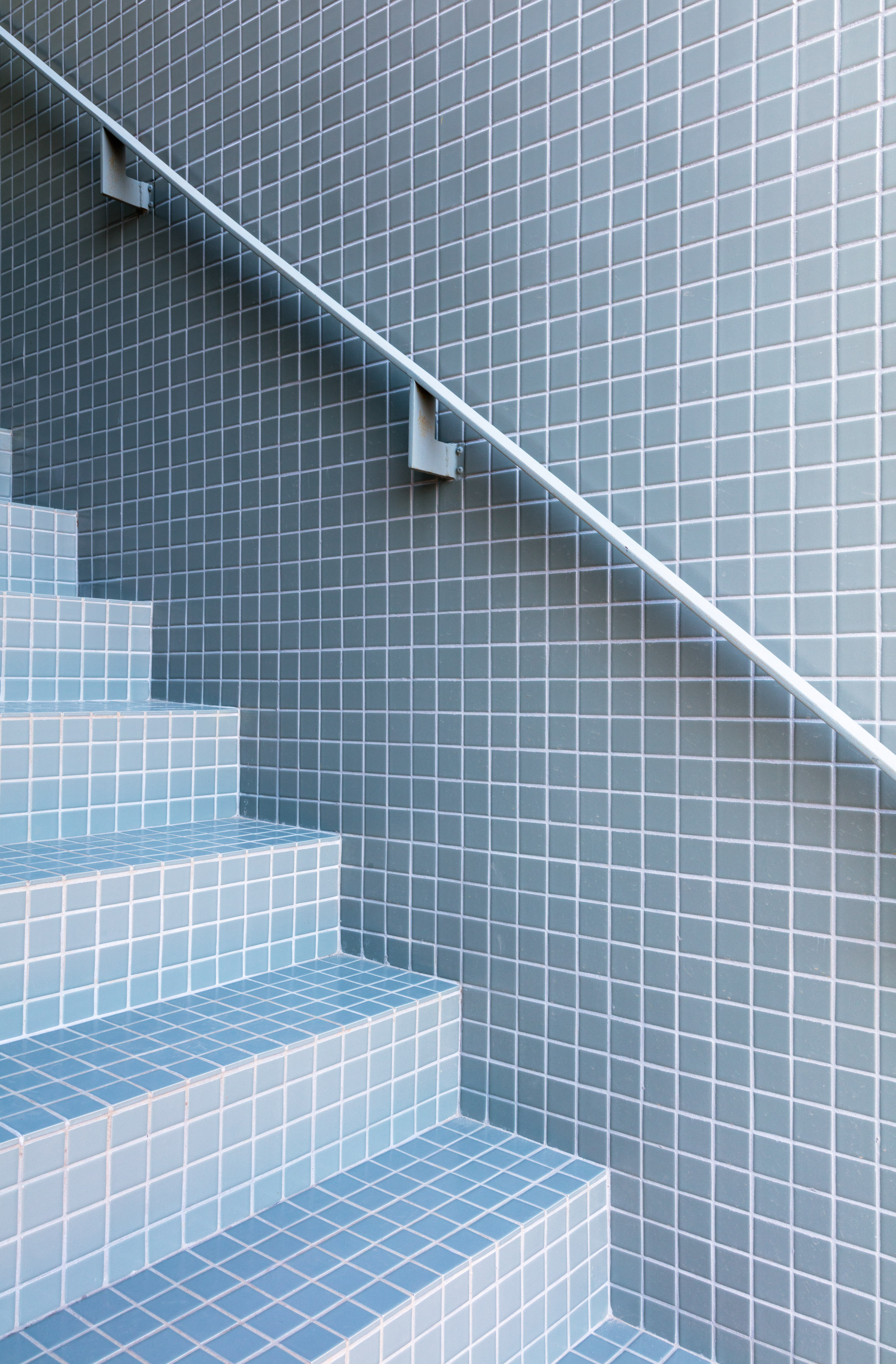 Blue tiling covers the exterior walls, outdoor staircase and floor of the deck extension, separating the volume from the existing building. Its colouring is intended to complement the stucco green facade of the main house, which dates back to the 1930s.

“All surfaces of the deck and the exterior stair connecting it to the lower level are clad in tile creating a fine three-dimensional grid,” the studio said. “While this rhythmic precision sets the addition apart from the existing house, the colour of the tiles matching that of the existing facades synchronises the two.” 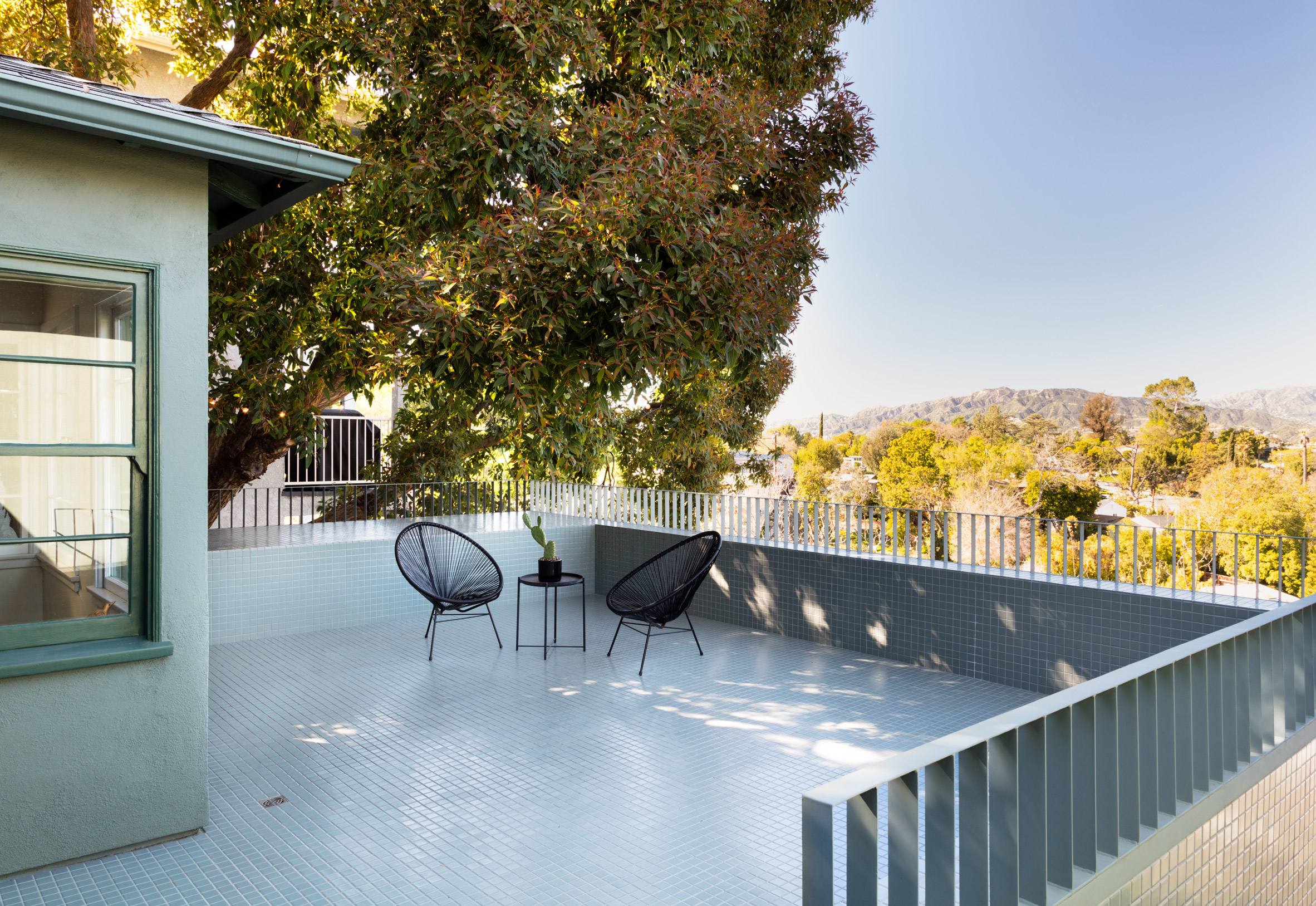 FAR was founded by Marc Frohn and Mario Rojas. It has offices in Los Angeles, Berlin and Santiago, Chile. Its previous projects include a tent-like residence in Chile made from angular polycarbonate panels that it publicly sold the plans for in 2008 .

Elsewhere in Mount Washington, ceramicist Raina Lee  made a showroom for pottery with her partner inside a stilted shed in the backyard of their home .

Photography is by Brica Wilcox.