Cristiano Bianchi and Kristina Drapić have photographed architecture across the capital of North Korea  for their book Model City Pyongyang. Here they reveal six of the most interesting buildings in the city.

Model City Pyongyang contains more than 200 pictures of the North Korean capital, which is described by Bianchi as an “open-air museum of socialist architecture”.

Italian architects Bianchi and Drapić decided to photograph Pyongyang after being surprised by the variety and colour of the architecture in the city following a visit in 2015.

“Pyongyang certainly delivered and we were fascinated by three elements: the ‘total planning’, which was largely recognisable through the city, the surprising colourful urban environment, which was totally unexpected,” Bianchi told Dezeen.

“We had in our mind the greyness of soviet-era cities and what we call the perception of a ‘fictional reality’, which later inspired the photography concept.”

To convey the feeling of fictional reality that the architects felt in Pyongyang, Bianchi and Drapić decided to replace the sky in every picture with a simple gradient of colours.

“The photography concept aims to establish a dialogue with the DPRK’s artistic representations, and at the same time wants to portray the initial, peculiar and puzzling feeling of ‘fictional reality’ that we had during our first visit,” explained Bianchi.

“We experienced for the first time such a strikingly different city: a sense of confusion, where the perception between what is real and genuine merges with what is seen as staged or faked.”

Bianchi and Drapić chose this illustration method as it echoes a similar technique used by Korean fine artists in paintings, sculptures, mosaics and propaganda posters.

“The photography is framed using an architectural approach and with no significant editing, whilst the sky is completely replaced by a soft gradient of pastel colours, taken from the colour palette used by Korean artists for posters, and by architects for facades,” explained Bianchi.

“The contrast between the two parts of the picture creates a visual alienation where the real part – the building or the city – looks unreal and the unreal part – the sky – could actually be real.”

Bianchi hopes that the photos will help people see the city in a different light.

“We will be happy if these photos will push the curiosity of people further from the stereotypes usually projected by the media about DPRK,” he said.

“And we hope the photos could transmit to the people the beauty of this city, a beauty of a different kind, which we hope will be preserved with all its peculiarities when a necessary change will eventually occur, in a future that we hope will unfold for the better.”

Read on for Bianchi’s pick of intriguing buildings in the city: Axis from the Mansu Hill Grand Monument (image at top of page) to the Monument to Party Founding, 1995

In many monumental cities the urban axes are of fundamental importance, and in Pyongyang this concept is particularly emphasised. The Axis from the Mansu Hill Grand Monument to the Monument to Party Founding is so long (1.3 miles), that on a hazy day you can barely see from one end to the other.

The shape of the two residential buildings flanking the Monument to Party Founding echoes the flags held aloft by the sculptural groups in front of the Mansu Hill Grand Monument at the opposite end of the axis.

The buildings were originally white, but later painted red to reinforce the connection; on their rooftops are characters that spell out the words ‘a hundred battles, a hundred victories’. Serving as an extension of the axis is the Ryugyong Hotel, one mile from the Mansu Hill Grand Monument, which rises like a massive futuristic pyramid from the city below. 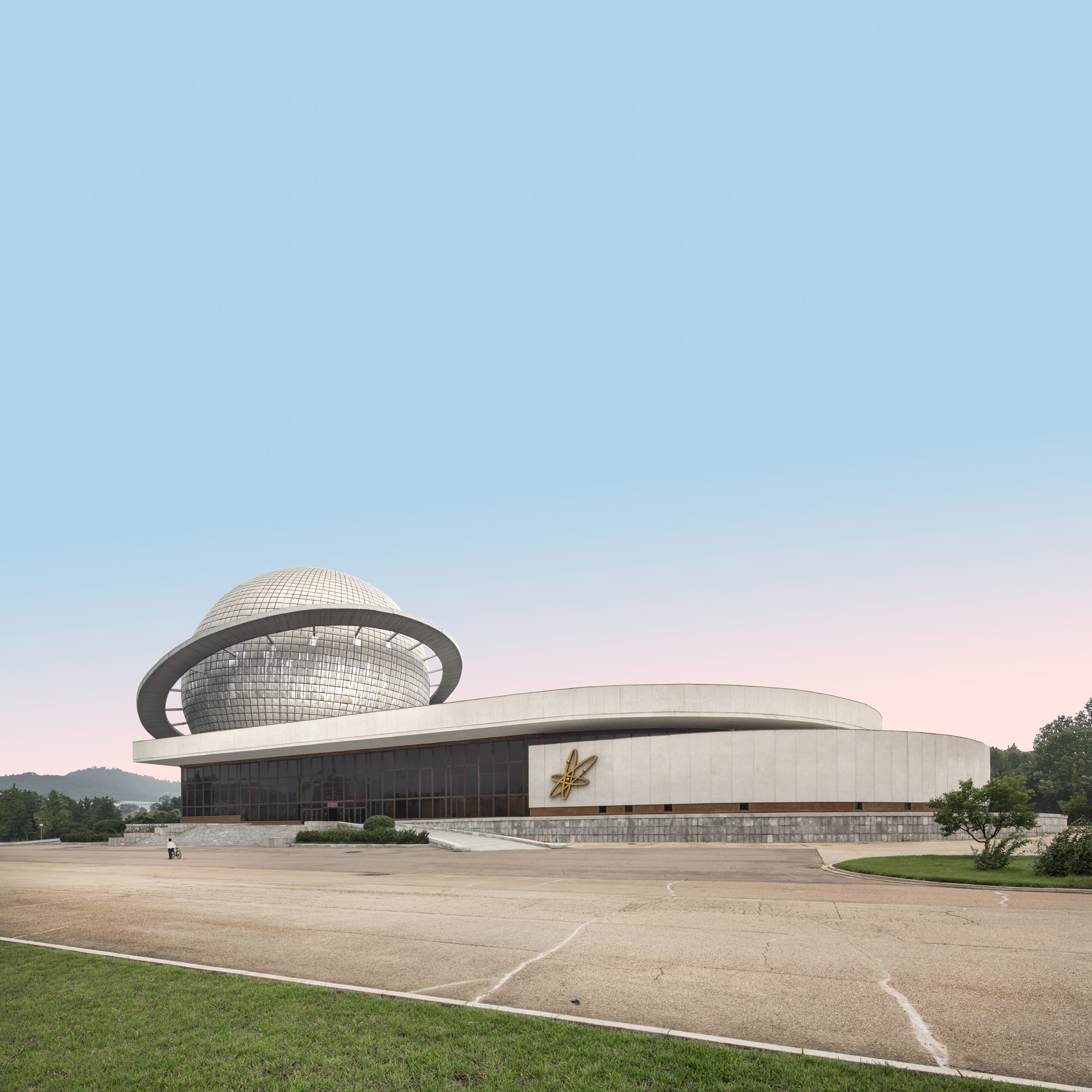 The planet-shaped Electronic Industry Hall is part of the Three Revolution Exhibition Complex, the official showcase of Kim Il Sung’s three revolutions (ideological, technical and cultural – the guiding precepts of the Workers’ Party of Korea) including six cultural buildings aligned along a monumental axis.

Their massive scale emphasises the importance of the exhibits inside, while the individual logos at the top of each building reflect the ideological content within.

The exhibitions inside the Electronic Industry Hall are related to the electronics and automation industries, communication and space research, robotics, computers, optical and measuring instruments. The building also contains a planetarium and section devoted to research into the peaceful use of atomic energy.

The architecture of the public buildings in Pyongyang is always highly symbolic and their concept and inspiration are often very literal, sometimes even naif, as it is considered very important to easily and clearly communicate to the people the use and the physical and ideological content of the building. 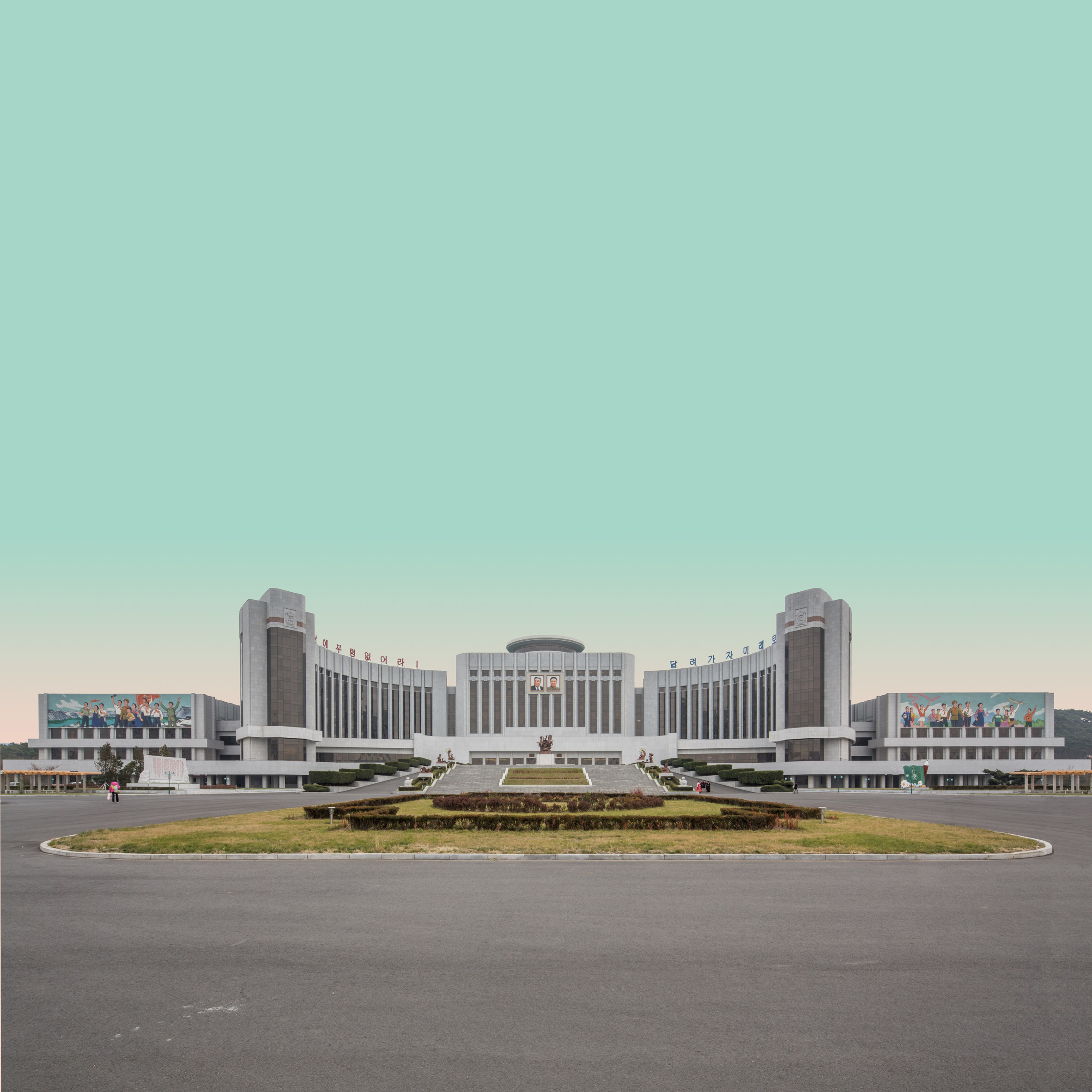 This public facility provides a place for children to participate in after-school activities, from learning music, languages and computer skills, to playing games. It is the largest of such centres in the country, and contains 120 rooms, a swimming pool, a gymnasium and a 2,000-seat theatre.

The architectural design represents two curved wings, outstretched to encircle the plaza, symbolising the embrace of the children by the leaders. The building was renovated in 2015: while the facade appears largely unchanged, the interior, originally quite sober and austere featuring terrazzo floors and mosaics, has been transformed into an unexpectedly playful space filled with hyper-saturated colour. The design of the building, which is a center for performing arts, is defined by the two red roof elements, which represent an open piano and an accordion: the main theatre is beneath the ‘piano’, while an auditorium is below the ‘accordion’.

As documented by photos on display in the main hall, the design was chosen from three different proposals by Kim Jong Il in 1986. In Pyongyang the different proposals for every new building are designed by selected teams of professors and their best students in the main architectural institutions, The Paektusan Academy of Architecture and The Pyongyang University of Architecture. 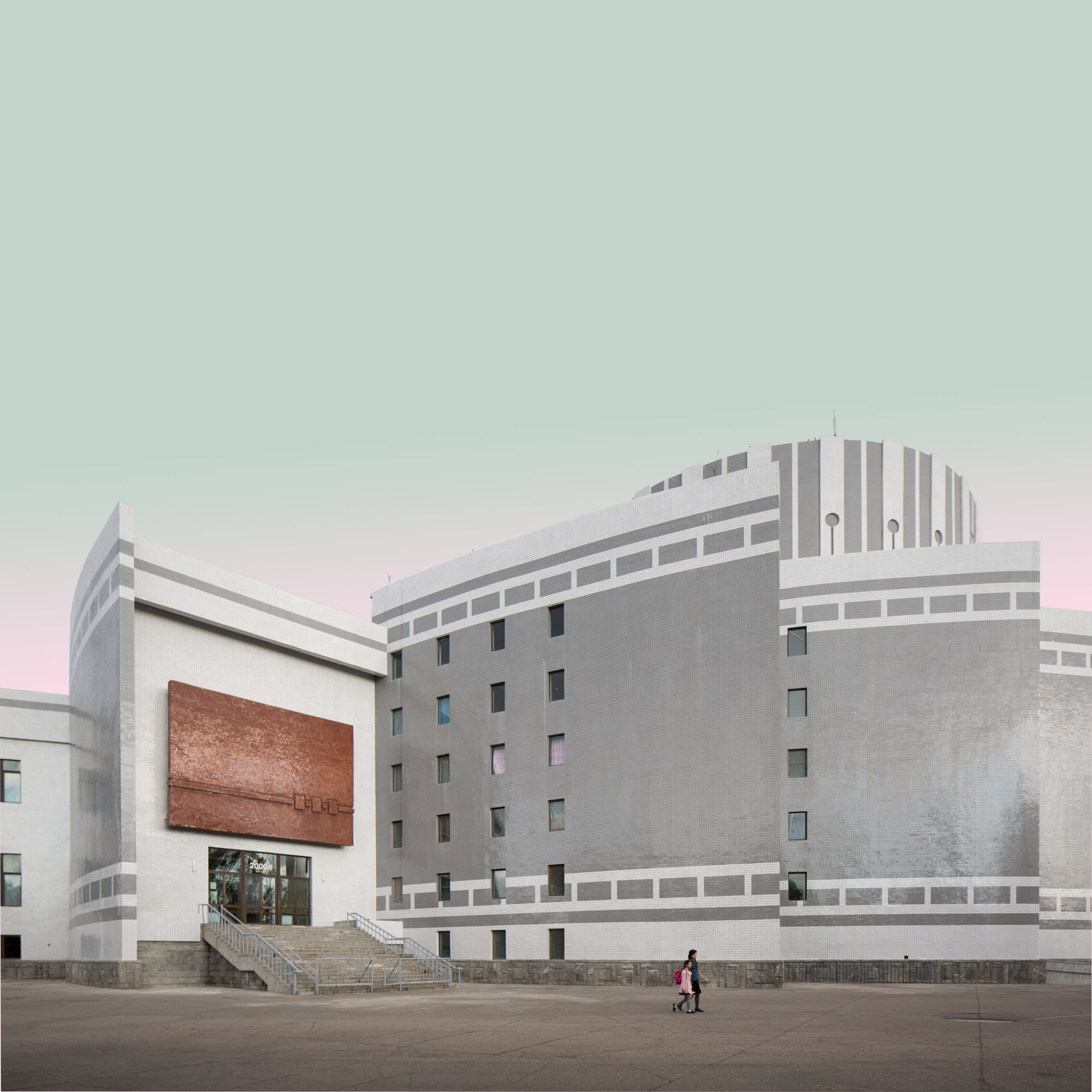 This is the country’s primary centre for film art and culture, which were intensively promoted by Kim Jong Il. Since 1987, it has also hosted the biennial Pyongyang International Film Festival, one of the few events in North Korea that actively seeks connection with the outside world.

The shape of the building is inspired by a film reel. The original brutal facade in concrete has been recently covered in grey and white ceramic tiles, making the image of the film reel more obvious.

The interiors have been mostly left in their original design, although one of the halls has been recently upgraded with up-to-date equipment and a ‘cinema bar’, the first of its kind in the country. 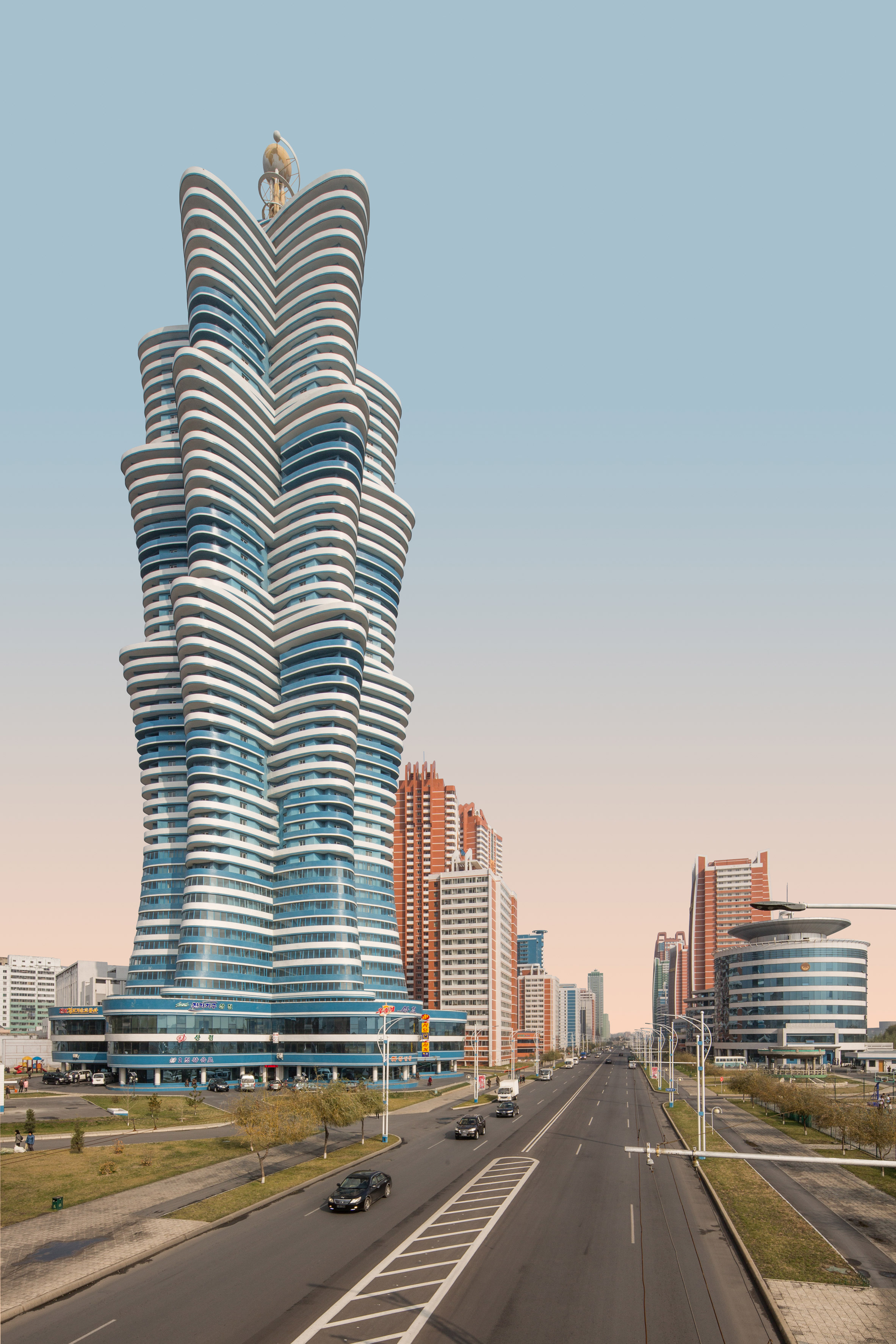 The city of Pyongyang is experiencing a period of intense construction and urban transformation. Entire new roads lined with residential high-rise buildings have been completed at a very fast speed in the last few years.

The huge high rise complex of Mirae Street, which opened in 2015, has 28 apartment towers, with an unprecedented composition of colourful facades clad in orange and green ceramic tiles and coronated by turrets and discs. It includes the iconic Unha Tower.

This 53-storey tower, shaped like a blossoming flower has immediately become the new landmark of the city. All of these constructions seem to follow a new and uniform design direction, where the combination of organic futuristic shapes and pastel colours results in an unprecedented retro science-fiction style, immersed in a fictional atmosphere of progress and carefree prosperity.