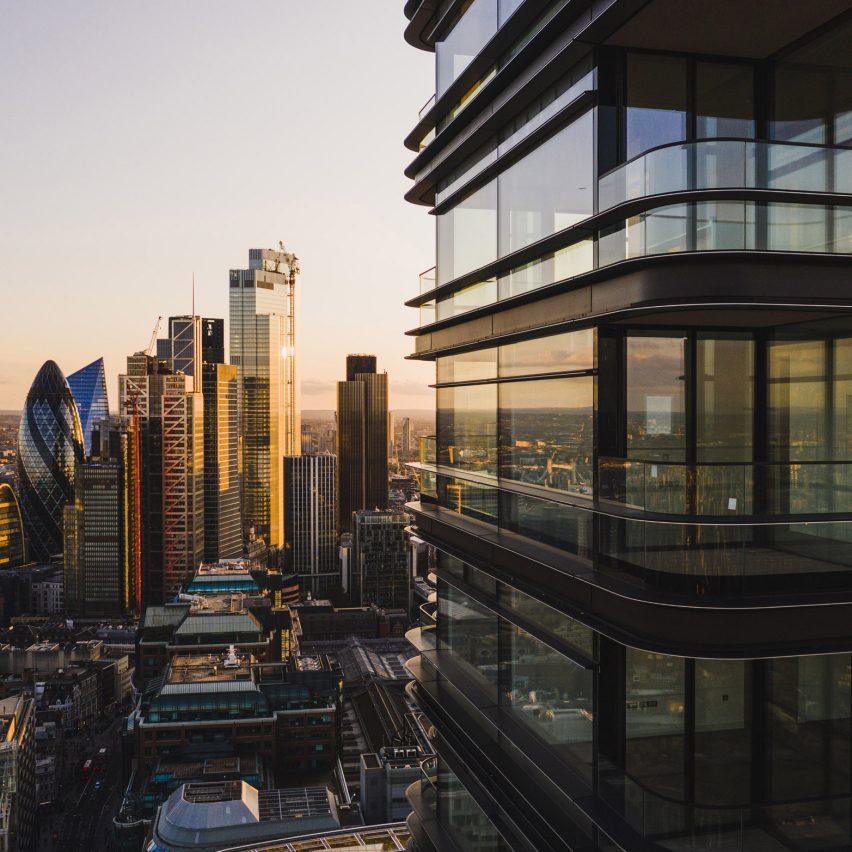 Named Principal Tower, the 50-storey building marks the completion of Principal Place, which is a mixed-use development positioned between Shoreditch and the capital’s financial district. As part of the development Foster + Partners also designed a 15-storey office for Amazon UK .

The tower was commissioned by Concord London and Brookfield Properties to help boost the scheme’s “residential appeal” alongside the development’s  commercial offerings, bars and eateries.

“Principal Tower is an integral part of a composition of buildings that includes the new Amazon headquarters, the adjacent low-rise residential buildings and the refurbished and restored Light Bar,” explained Grant Brooker, director at Foster + Partners.

“It was designed specifically for this location – the character of the buildings and the form is specific to the place it occupies, and it would certainly not be built like this anywhere else in the city,” he told Dezeen.

Principal Tower takes the form of three different-sized volumes arranged in a cruciform that measures less than 25 metres each side.

This compact footprint was dictated by the site’s physical constraints. It is bordered by existing buildings and the railway lines of the adjacent Liverpool Street train station.

Foster + Partners positioned the smallest of the three blocks to face Shoreditch, a largely residential area, while the middle-sized volume are nearer the high-rise buildings in the City of London. The tallest, 162-metre-high volume slots in between them.

The three volumes are unified by an envelope of floor-to-ceiling glazing and broad brass-coloured louvres and balconies.

This aesthetic was designed by Foster + Partners to complement the metal and glass cladding of the adjacent Amazon UK headquarters.

“We sought to link the predominant buildings through their materiality – the metal cladding varies in colour and tone and is brighter on the tower, while taking on a matt texture on the Amazon headquarters,” explained Brooker.

“In comparison to the glazed facade of the office building, the residential tower has a strong expressed external texture with broad louvres and generous curved balconies which soften its form,” Brooker told Dezeen. 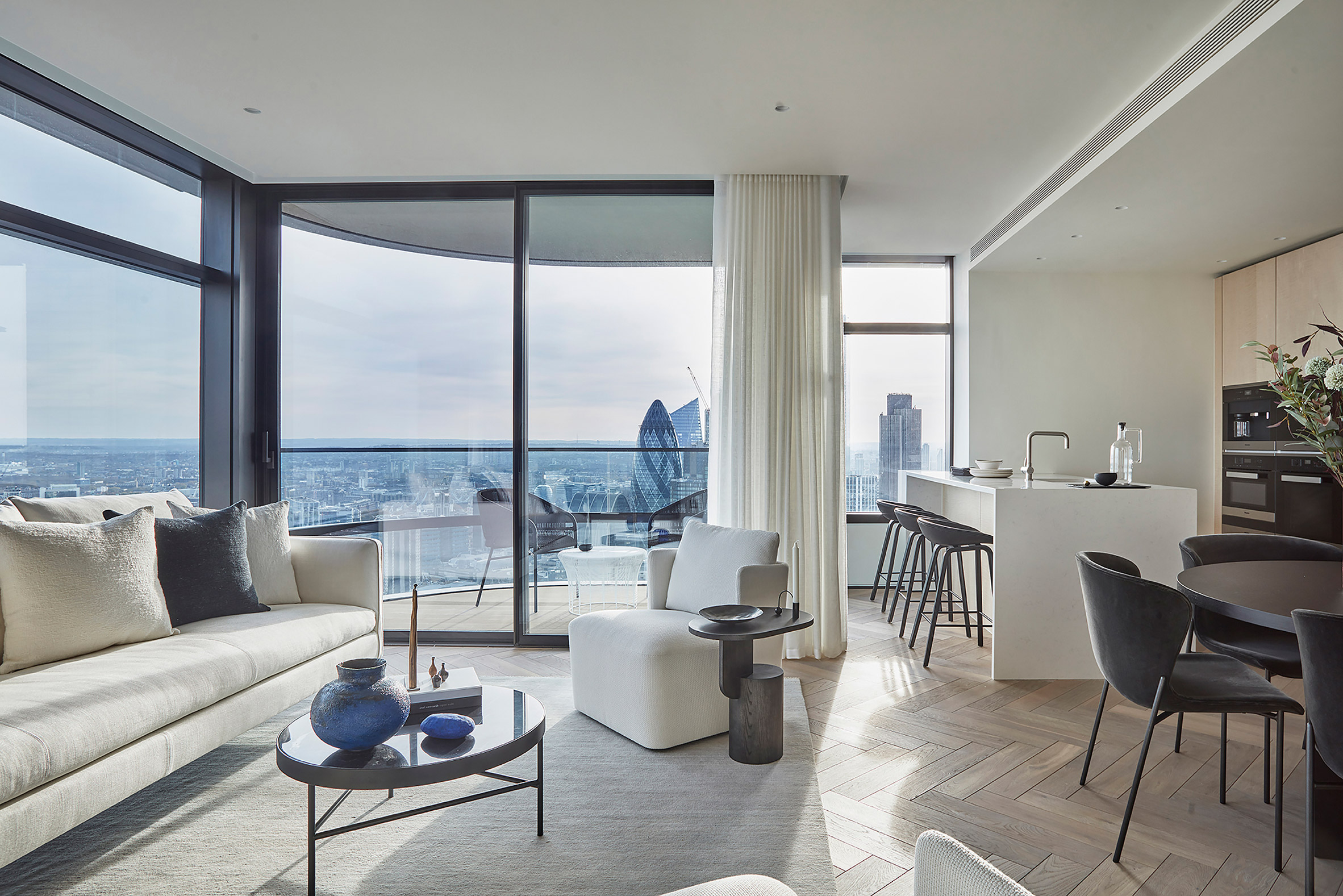 The upper levels contain three-bed dwellings, formed by the combination of the one and two-bed residences below, as well as penthouses at the top with bespoke layouts. 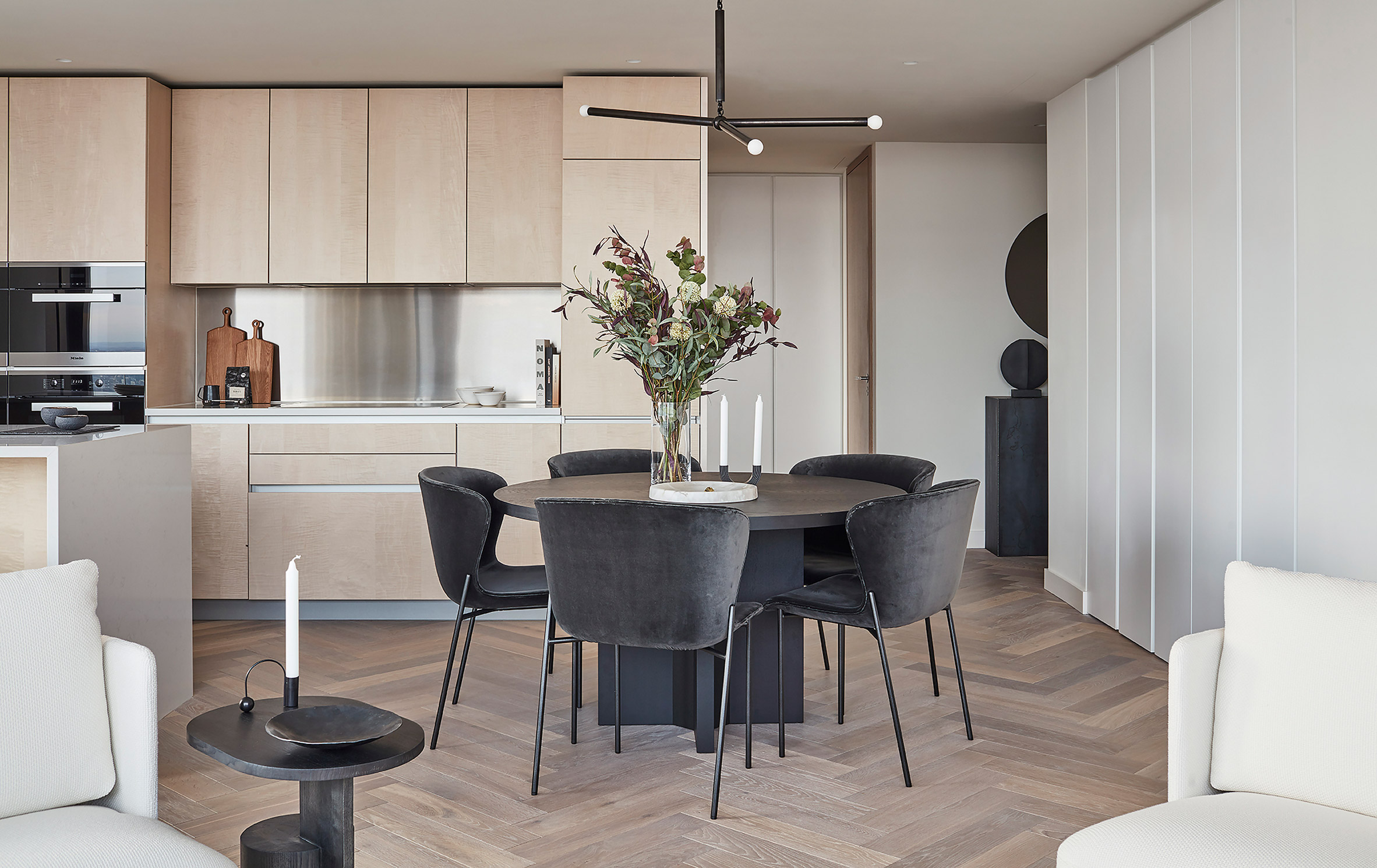 Every Principal Tower apartment has its own balcony, made possible by the eight corners of the tower’s cross-shaped plan. These balconies are accessed through floor-to-ceiling glazing that frame views out over the city.

Foster + Partners developed the interior design for each of the apartments to retain focus on these views, limiting ornament to a selection of locally sourced and hand-crafted furnishings. 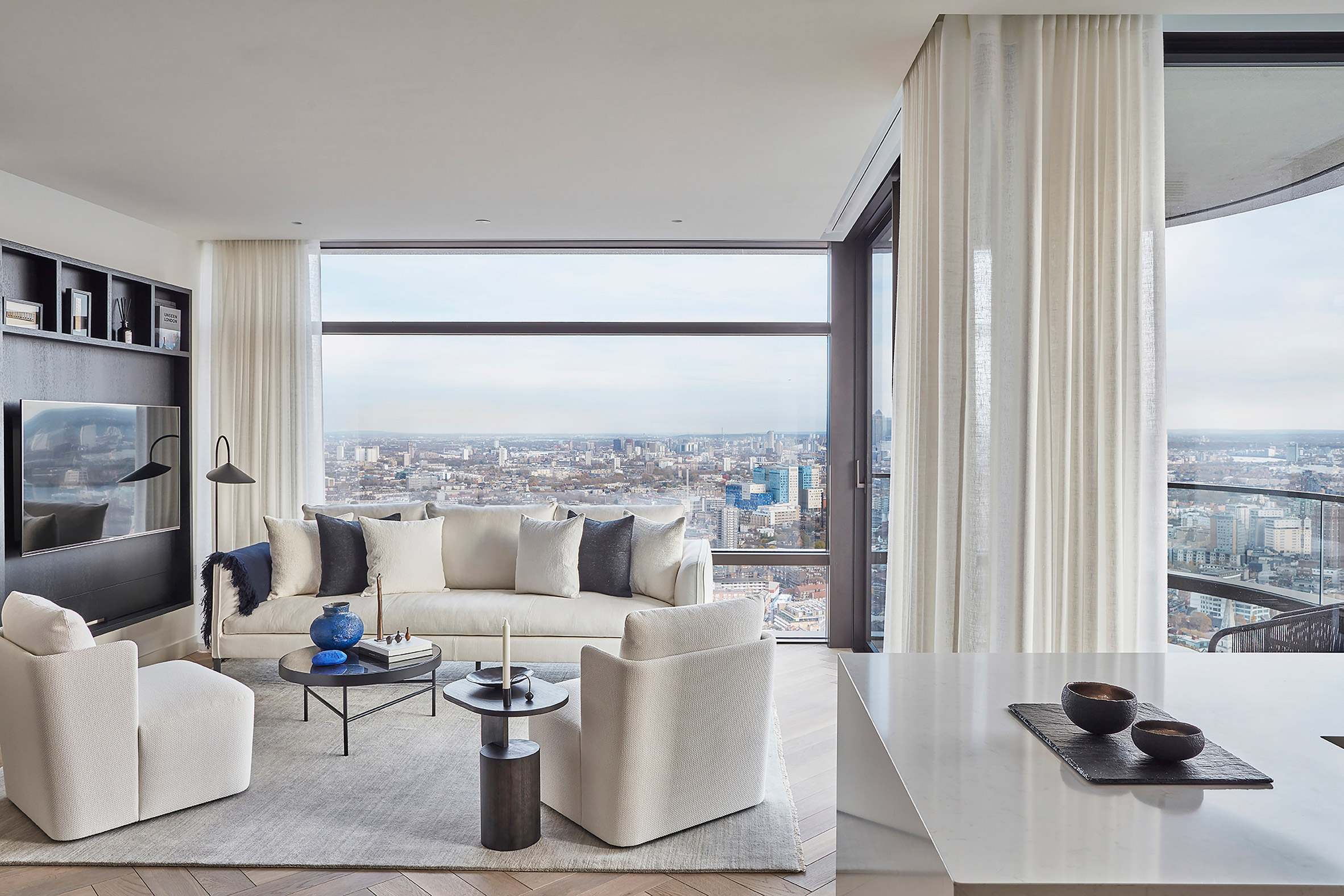 “We wanted to create a calm, understated and contemporary aesthetic that exemplifies the essence of the area and would appeal to a broad range of people,” explained Brooker.

“The focus is on the extraordinary views and setting, while creating a seamless relationship between the inside and the outside with floor-to-ceiling glazing panels.” 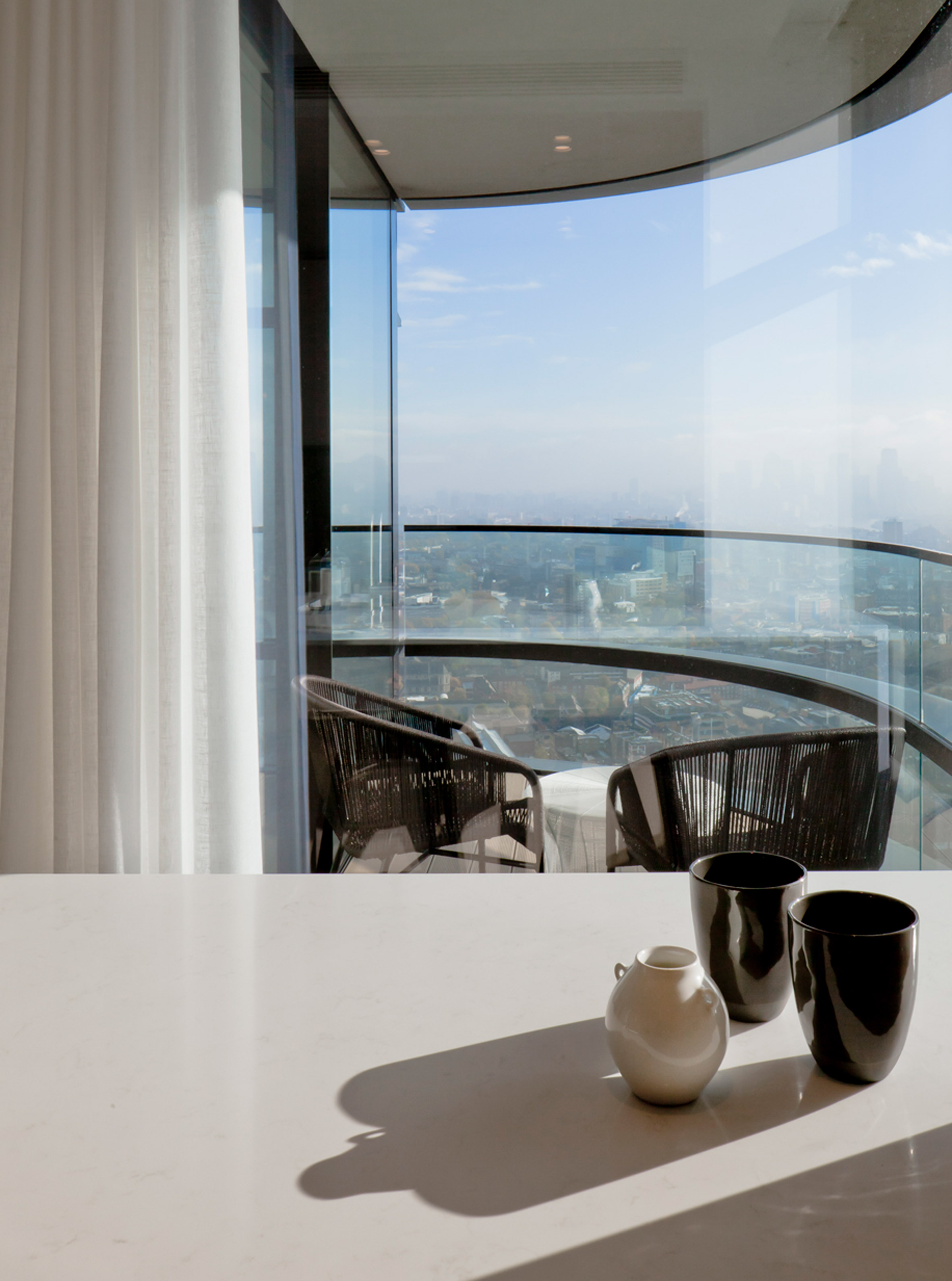 The tower is complete with a number of shared amenities that include a pool, spa, gym, cinema, residents lounge, and grand lobby featuring a seven tonne staircase that was assembled and finished on site. 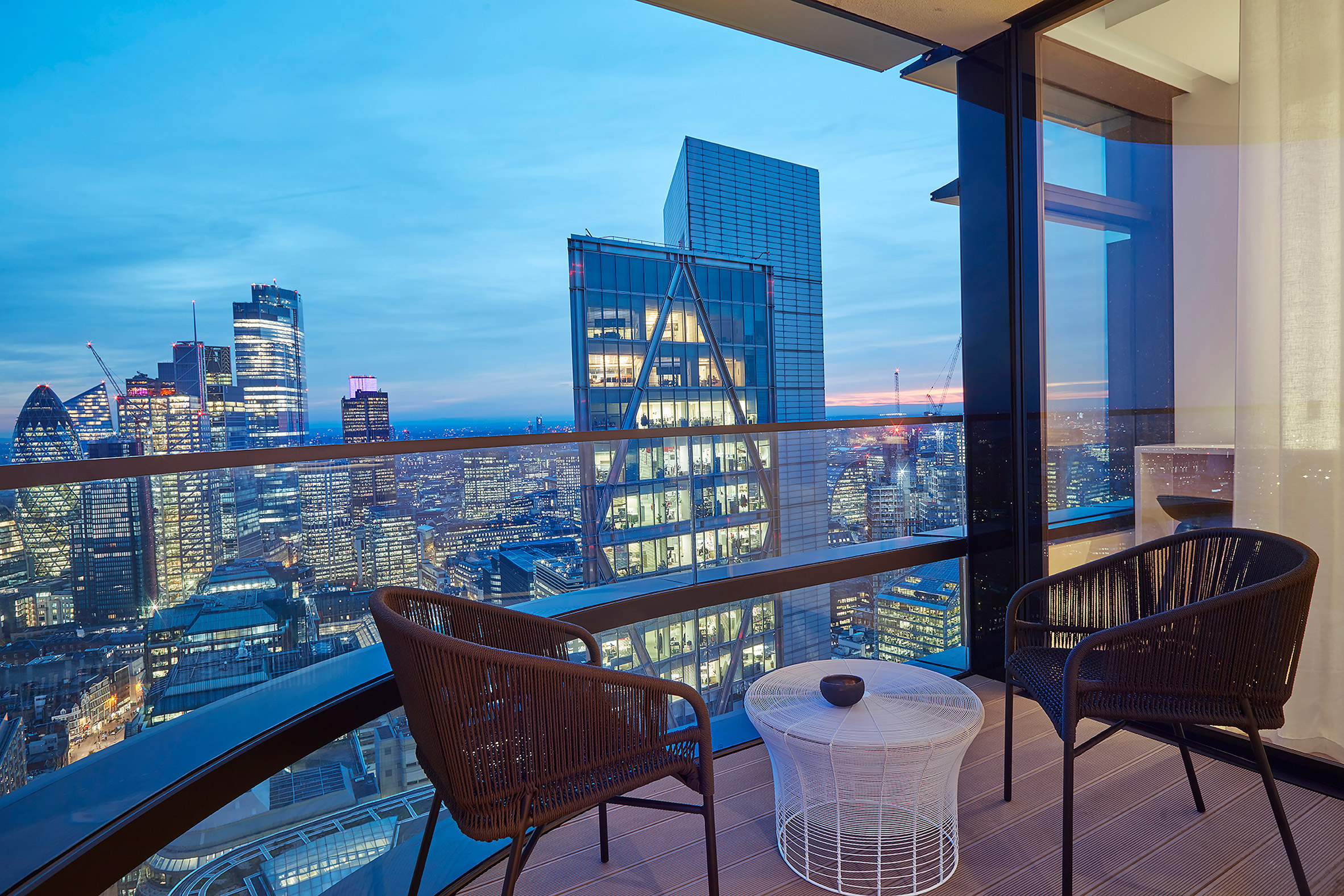 Founded in 1967 by Norman Foster, Foster and Partners is an architecture studio with offices worldwide. Its headquarters is located in London.

Principal Tower is the latest in a series of skyscrapers designed by the studio, including Philadelphia’s tallest building and a proposal for the China Merchants Bank headquarters in Shenzhen.

In London, the studio also recently hit the headlines after it revealed visuals for the 305.3-metre-high Tulip tower , though plans were later axed by mayor of London for offering “very limited public benefit”.

Photography is courtesy of Principal Tower unless stated.