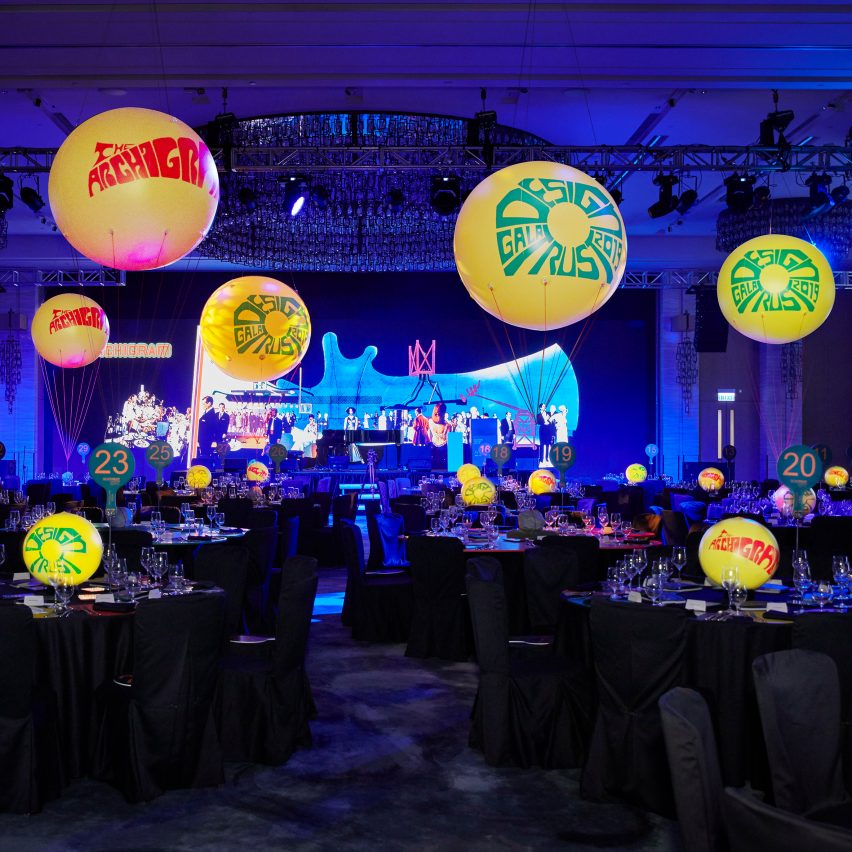 In this Dezeen movie, architects Peter Cook and Dennis Crompton explain how they drew from the Archigram archive to create the concept for the 2019 Design Trust gala in Hong Kong .

The former Archigram members were appointed as creative directors of the fundraising event for the Design Trust, a charity that supports creative projects in Hong Kong and the surrounding region.

“Dennis Crompton and I have been commissioned by the Hong Kong Design Trust to make a manifestation of Archigram ideas at their gala event,” explained Cook in the movie.

“The Design Trust supports young designers and they have the gala event every year to raise money for that purpose.”

Influential projects include Plug-In City, where pre-fabricated home capsules are plugged into a larger megastructure; and Instant City, a transportable kit of parts that can be quickly assembled to provide the inhabitants of small towns with access to the resources and cultural attractions of a large metropolis.

For the gala, Cook and Crompton suspended banners from the ceiling featuring prints of Archigram drawings and introduced a number of what Crompton describes as “Archigrammic items” into the ballroom itself.

Rather than being circular like most gala dinner tables, the event featured irregular-shaped tables in bright shades of red, yellow or green.

Archigram-branded balloons, which recall one of the proposed delivery methods for the group’s Instant City project, were attached to each table.

Guests were also photographed against a green screen and superimposed onto an Archigram drawing via a live video feed. Crompton then created a collage of photographs of all the guests, which was unveiled at the end of the night.

“I’ve arranged for there to be a green-screen stage, so they will be captured with television cameras, but then that will be projected onto an Archigram drawing,” Crompton explained.

“Then I’m going to take the images that we captured and collage them all into another Archigram drawing. And that will be on a long digital screen at one end of the room. And they’ll suddenly see themselves appearing amongst all the other dinner guests.”

He continued: “I want to give them the experience of entering into an Archigram world.”

They also provided an original Archigram drawing for the auction.

As well as the auction and the dinner, guests were entertained by musician Rosey Chan, who created a multimedia performance combining video and a live piano set.

The appointment of Cook and Crompton as creative directors of the Design Trust gala follows the acquisition of the entire Archigram archive by M+ Museum in Hong Kong in March 2019.

Cook believes that there is a relationship between a high-density city like Hong Kong and some of the ideas contained in the work of Archigram.

“To some extent, the work of Archigram, which was experimental, innovatory and very mechanistic in its time, has been taken up by the spirit of some of the things that we see happening in Hong Kong,” he said.

Archigram’s work often presented an optimistic vision for the future of urban life, which Design Trust co-founder and executive director Marisa Yiu said was much-needed at a time when violent clashes between police and protestors are ongoing in the city.

“[Archigram’s] experimental approach has always focused on human needs and creating a hopeful, better way of living, which feels timely and necessary for us here and right now,” she said.

“Despite all that is going on right now, this is a symbol of optimism,” said Cook.

This movie was filmed by Dezeen in London and Hong Kong.

Dezeen was a media partner for the Design Trust gala. We will be publishing a series of video interviews with Cook and Crompton about Archigram’s work next month.

The post Guests “enter into an Archigram world” at Design Trust gala in Hong Kong appeared first on Dezeen .