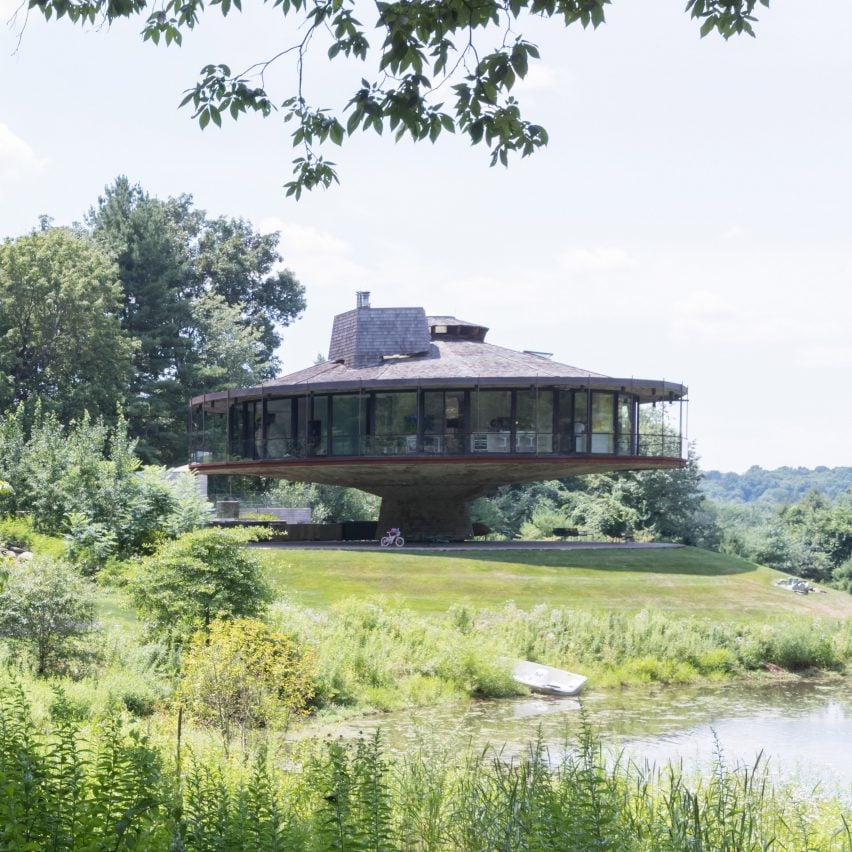 American firm Mack Scogin Merrill Elam Architects has refurbished a round , mid-century dwelling that rotates 360 degrees and has created a pool house that doubles as guest quarters.

The Round House is located on a verdant, four-acre property in Wilton, a small town in southwestern Connecticut . 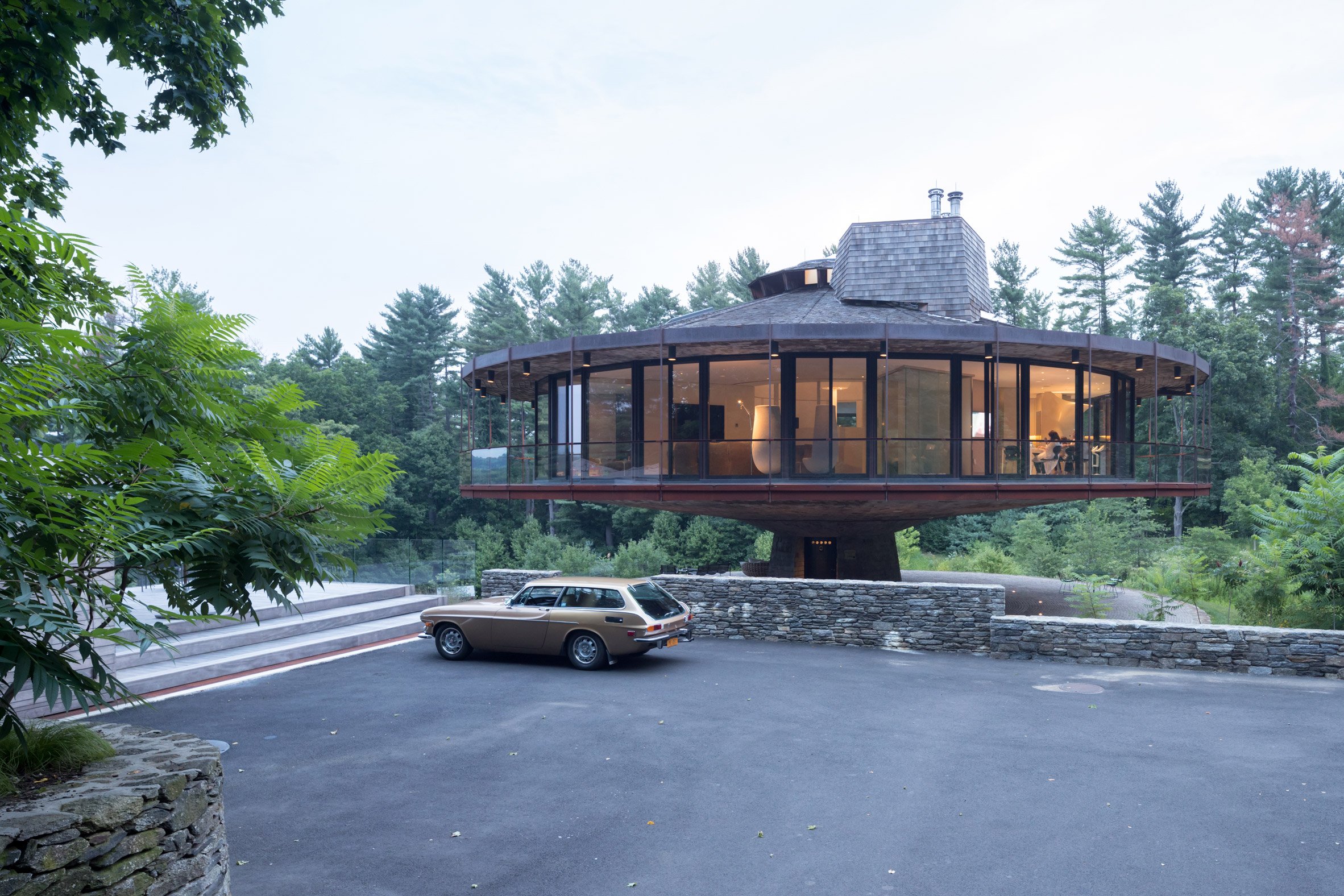 The unusual property was completed in 1968 by Richard T Foster, an architect and engineer who worked with Mies van der Rohe and Philip Johnson .

Foster lived in the home for over 35 years, until he passed away in 2002. The residence is now owned by a Manhattan couple who use it as a weekend getaway. They hired Atlanta firm Mack Scogin Merrill Elam Architects to update the dwelling and create a new pool house that can also serve as guest quarters.

Measuring 72 feet (22 metres) in diameter, Round House is elevated above the ground, forming a patio underneath. It is anchored to a cylindrical core that contains a spiral staircase, providing access to the interior. Rising up from the roof are a chimney and cupola.

The building has a steel structural system, which rests upon a 14-foot-wide (4.2-metre-wide) ball bearing ring. The outer portion of the home is held up by hangers connected to the roof. Exterior surfaces are wrapped in glass and cedar shingles.

The house rotates 360 degrees, allowing each room to experience a variety of views. The slow, spinning movement is made possible by an electric motor and mechanical components similar to those used in gun turrets.

With the touch of a button on a control panel, the owner can set the house in motion. Using the fastest speed, it takes 45 minutes for the building to complete a full circle. 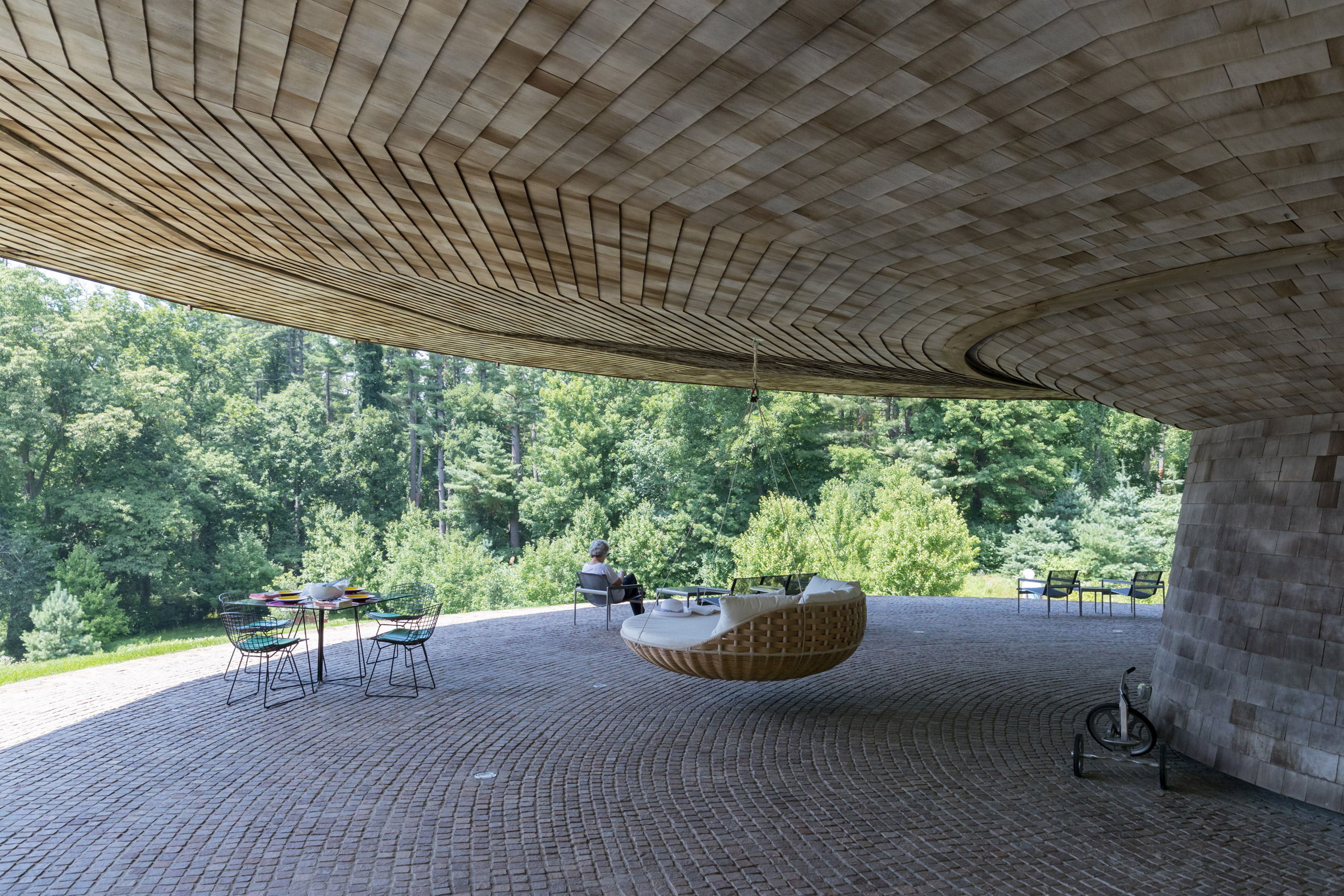 The project called for the renovation of exterior elements, such as the wooden shingles, the patio’s cobblestone flooring, and the weathering-steel fascia that encircles the building. The team also replaced single-pane windows with double-layer versions.

The 2,997-square-foot (278-square-metre) house contains a living room, kitchen, master suite, children’s bedroom and small study. Modifications to the interior were guided by two main goals – to ensure the house is code compliant and “to reveal the potential of natural light”. 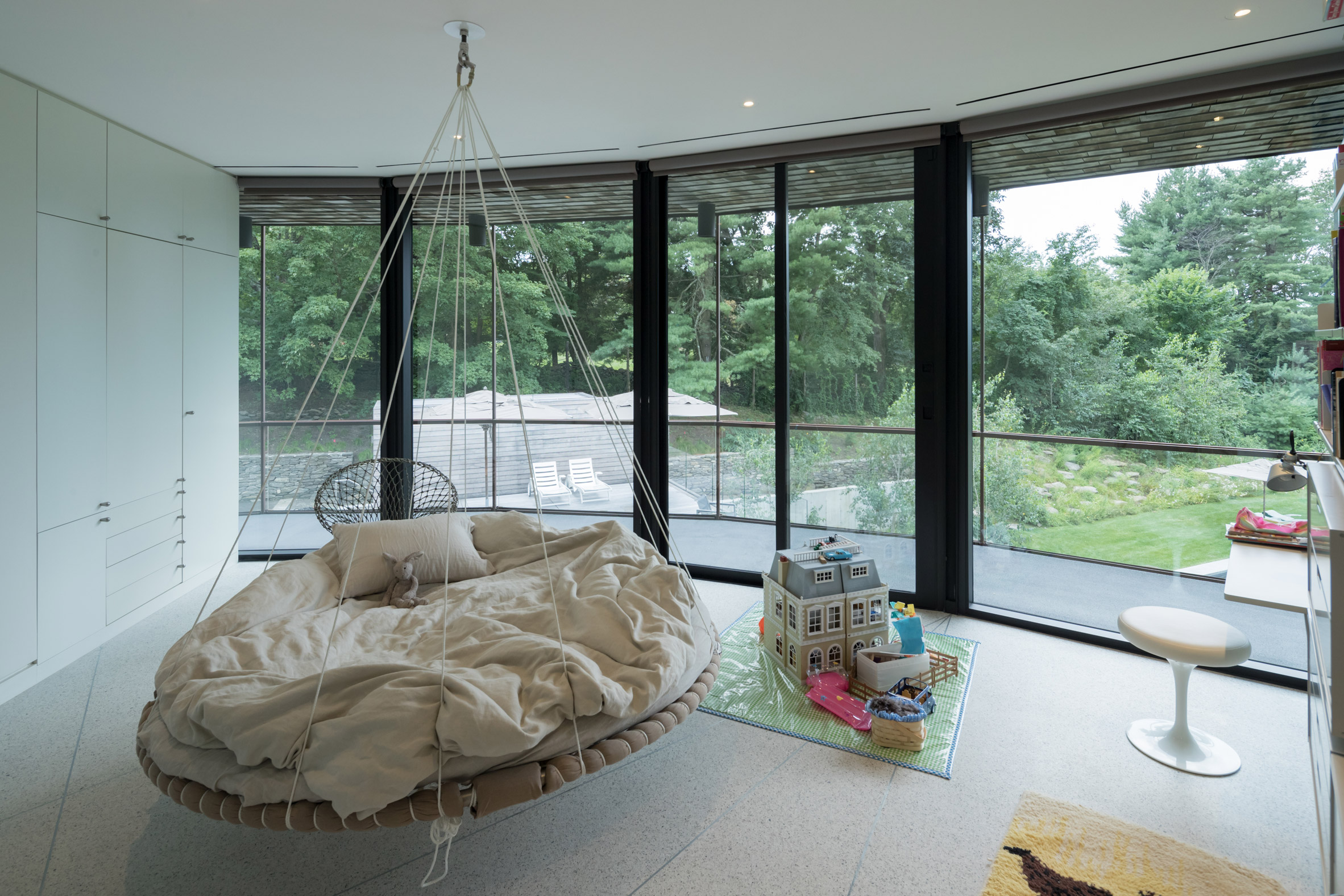 During an earlier renovation, a wall between the kitchen and living area was removed. The recent update entailed the removal of more partitions in order to enlarge the two bedrooms. The team also introduced reflective surfaces and light-toned finishes, including new terrazzo flooring.

The home is fitted with contemporary furnishings, such as chairs by Phillipe Starck and Marcel Wanders . In the children’s bedroom, a round bed is affixed to ropes and hung from the ceiling. 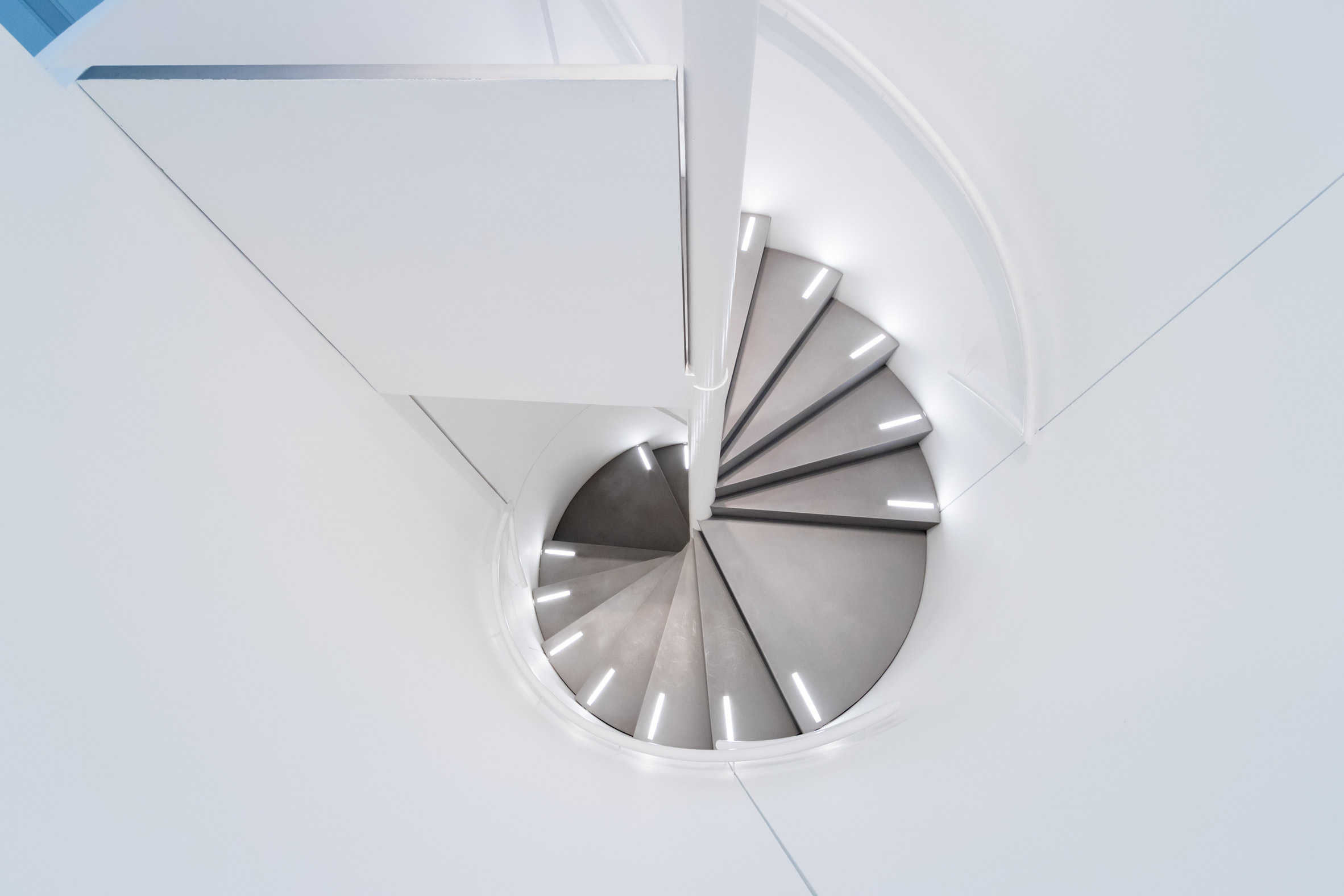 The new pool house was built near the main house to replace an older structure. Rectangular in plan, the building has walls clad in garapa wood and is topped with a roof deck.

Totalling 560 square feet (52 square metres), the pool house contains an exercise and lounge area that can be converted into sleeping quarters. It also houses a kitchenette, changing room, steam shower and sauna.

The project also entailed changes to the property’s vegetation, which were overseen by esteemed landscape architect Darrel Morrison , known for such projects as the landscape design at Storm King Art Center in New York.

“The previous existing surroundings were similar to that of a suburban lawn, and Morrison’s primary goal was to ‘re-wild’ the property,” the team said.

The property now features wildflowers and tall grasses, along with a variety of trees and newly placed stones. The landscape is designed to “seamlessly evolve with the seasons and will naturally change over the years”.

Other round buildings a house in northern Italy that can rotate 360 degrees , a restaurant in Sydney by Collins and Turner , which features curved balconies wrapped in charred-timber dowels, and a cylindrical office building in Geneva by Local Architecture , which features an overhanging roof supported by skinny metal columns.

Photography is by Iwan Baan , unless stated otherwise.