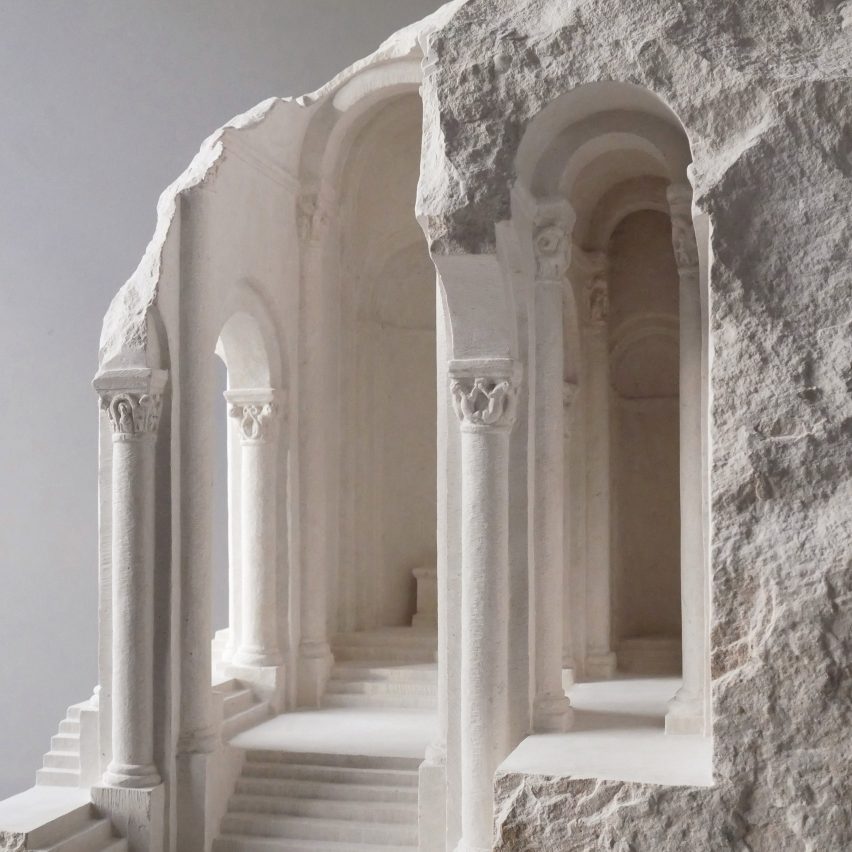 Doric columns, arches and vaulted ceilings are among the architectural details that Matthew Simmonds has carved from stone in these intricate sculptures.

The result of a lifelong interest in stone architecture, British sculptor Simmonds‘ portfolio explores the characteristics of ancient and medieval buildings. Some of his models depict real structures, like Florence Cathedral, while others are abstract details.

Each piece is intricately hand carved into a single block of marble or limestone, and designed to evoke the feeling of a larger space.

“The world of historical architecture, particularly that of religious buildings, offers an unlimited language of expression to be inspired by,” Denmark-based Simmonds told Dezeen.

“While I often make works that are historically very specific to just one time and culture, I also try to balance this with less specific and more abstract works that draw on the use of space and light.”

Simmonds embarked on a career in stonemasonry in 1990, and spent several years working on architectural restoration projects in the UK, including on Westminster Abbey and Ely Cathedral.

He moved to the artist town of Pietrasanta in Italy six years later, to hone in his skills in classical marble ornament, before going on to apply them as an artist.

Simmonds’ sculptures typically measure between 30 and 50 centimetres in height, and each one is crafted within an individual slab of stone sourced from an Italian quarry.

The creative process begins by studying the form of each rock, to ensure the style of the sculpture complements the stone’s natural aesthetic.

“I like mostly to work with natural boulders of stone, being inspired by their shapes to create an internal world, or a fragment of a world, that is in essence quite separate from the world outside,” Simmonds added.

“I find that working in miniature helps to express this, through the creation of something that can appear monumental even at a small scale.”

Simmonds established this process on his very first sculpture, Hidden Landscape. Carved from a square cut piece of stone, it was envisioned to reveal a hidden world that already existed inside the rock.

The artist refined the process and artistic expression through a series of individual sculptures of single spaces complete with more precise detailing.

The time needed to create a work can vary depending on the size and complexity of the sculpture, but typically they take between three and four weeks to carve.

However, Simmonds’ most complex piece took eight months to create. Named Windows, it features a series of panels containing a variety of different sculptural forms.

While most of Simmonds’ sculptures are informed by basilicas, churches and cathedrals, he has also studied traditional architecture from a number of different cultures and eras.

One of his more abstract series, Trilogy, comprises a series of internal spaces that reference key elements of traditional Chinese architecture.

The sculptures were designed to follow the rules of Feng Shui, which dictates that there should be no broken edges and that details should be framed through window-like openings.

Another artist experimenting with stone to create architectural sculptures is Conrad Willems.

In 2018, he created a created a three-metre tall architectural sculpture named Construction IV, which was built from 500 pieces of self-supporting Borrèze sandstone.