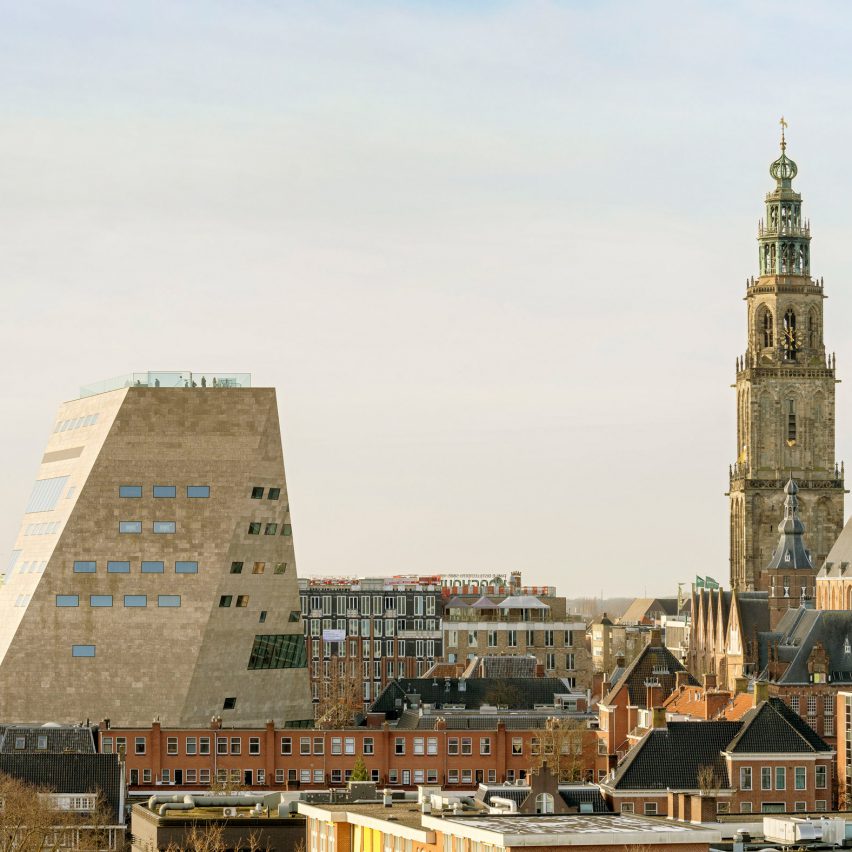 NL Architects has completed a huge cultural complex in Groningen , which is set to become an important landmark for the Dutch city.

Billed as a “cultural department store”, Forum Groningen contains a wide variety of facilities, including cinema screens, exhibition galleries, an auditorium for performances and talks, library facilities and workspaces.

At its heart of the building is an elaborate multi-level atrium where the public will be encouraged to meet, work and spend time. 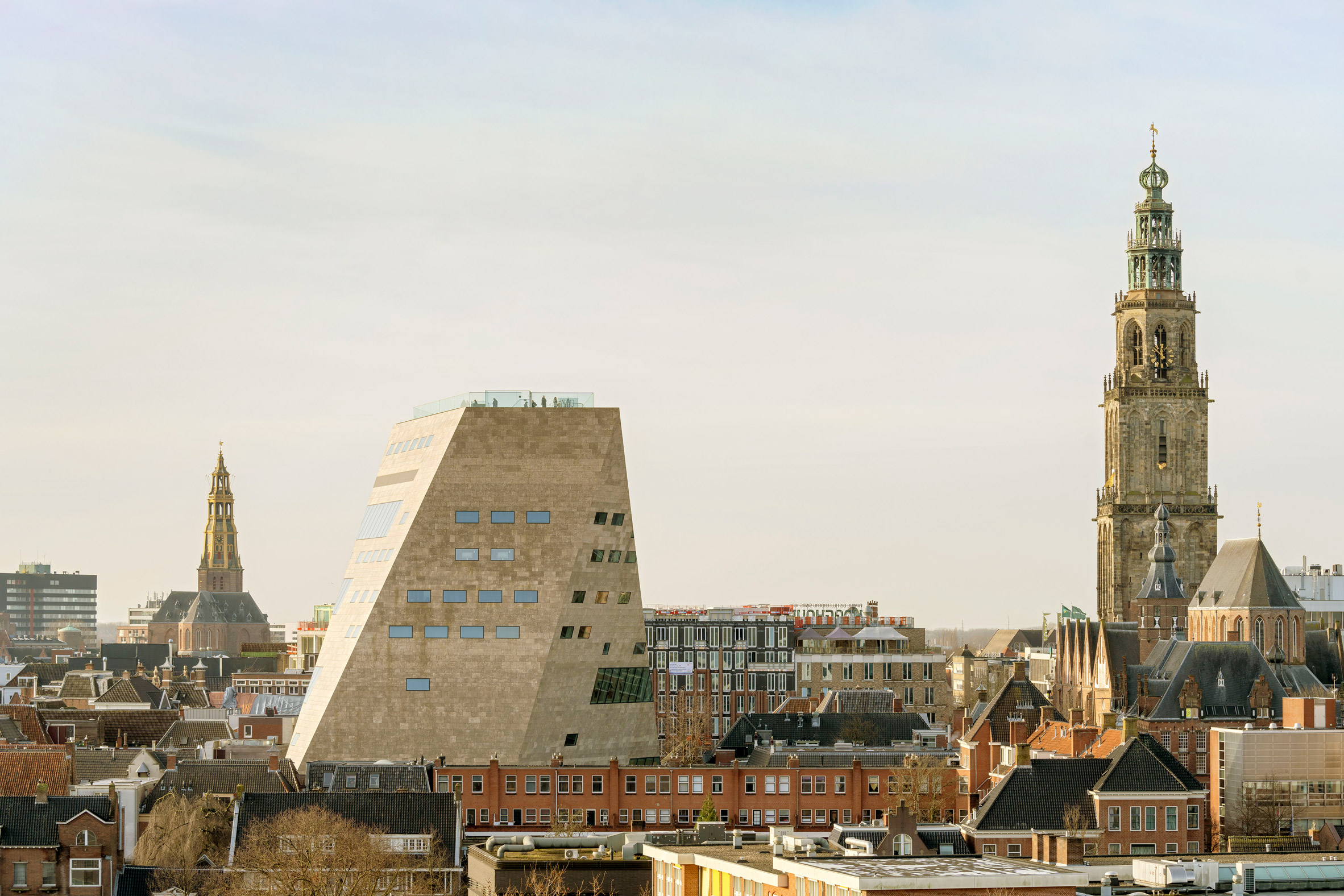 “It is such a big gift of the government to provide a comfortable place for its residents to hang out without the obligation to consume,” explained NL Architects co-founder Kamiel Klaasse.

“We hope it will become a kind of living room for the locals. A place that you return to frequently, but also a place to work,” he told Dezeen.

“If I worked in Groningen I would probably give up my office and move in the Forum permanently!” he joked. 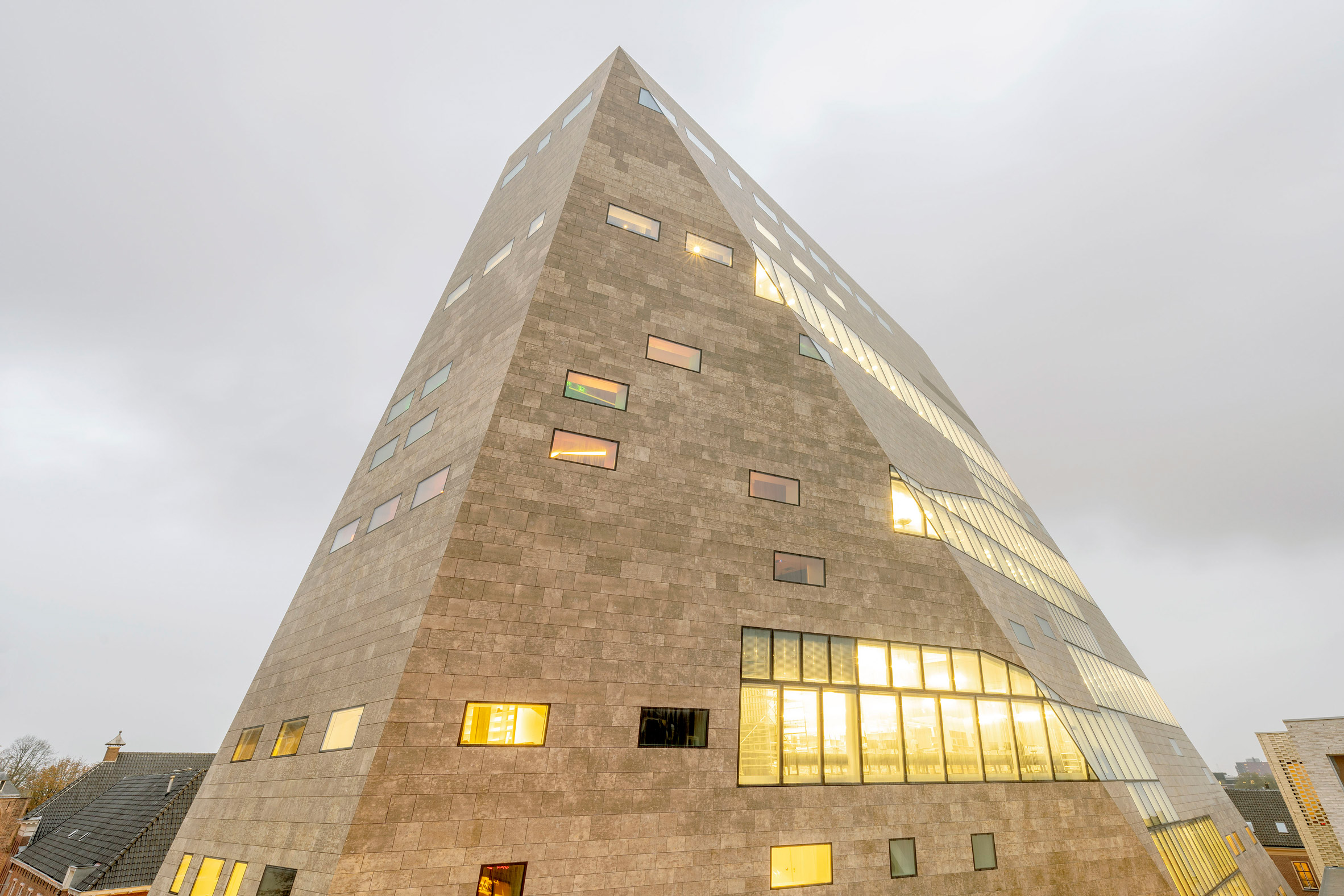 The building is 11 storeys high and clad in stone, matching the Bentheimer sandstone that features on many of the city’s best-known structures, including the Martinitoren steeple and the City Hall.

It has a multi-faceted shape, which NL Architects created by starting with a rectangular block and subjecting it to a series of “slices”.

“The tapered shape was conceived with the objective to reduce the visual impact of the immense volume, to make it look more friendly,” explained Klaasse. 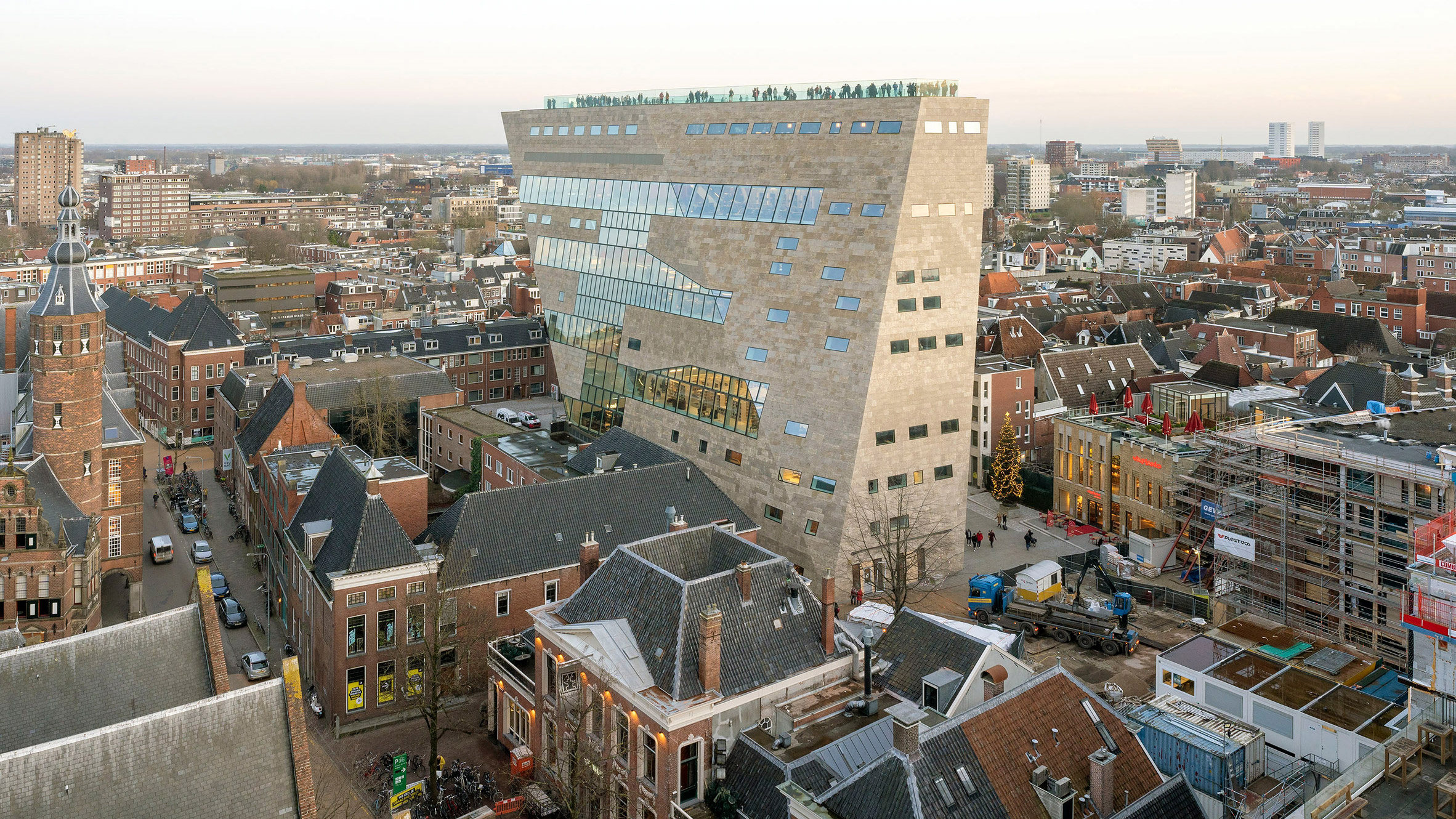 “One type of slice improves the light conditions around the building, while another set articulates the entrances and the access to the underground parking garage,” he said. “The slanted facades make the building sort of disappear.”

Luckily, according to Klaasse, the building’s position in the middle of a city block means its large size is often not perceptible from street level. 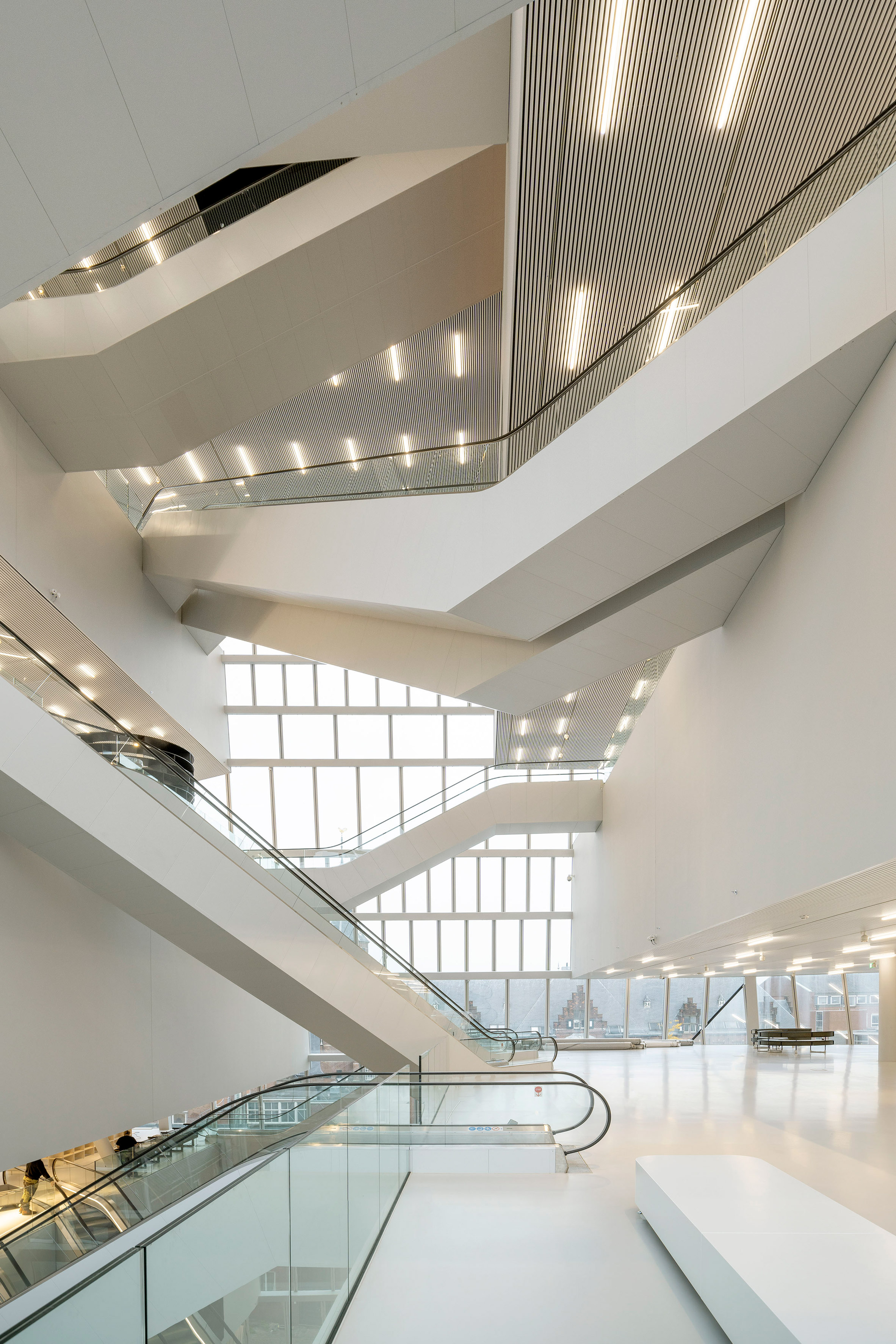 Inside, the atrium was conceived as a series of public squares, stacked vertically and connected by a sequence of angular escalators. NL Architects describes the space as a pumping heart with outstretched tentacles.

The idea is that visitors will be encouraged to explore different areas, no matter the reason for their visit. 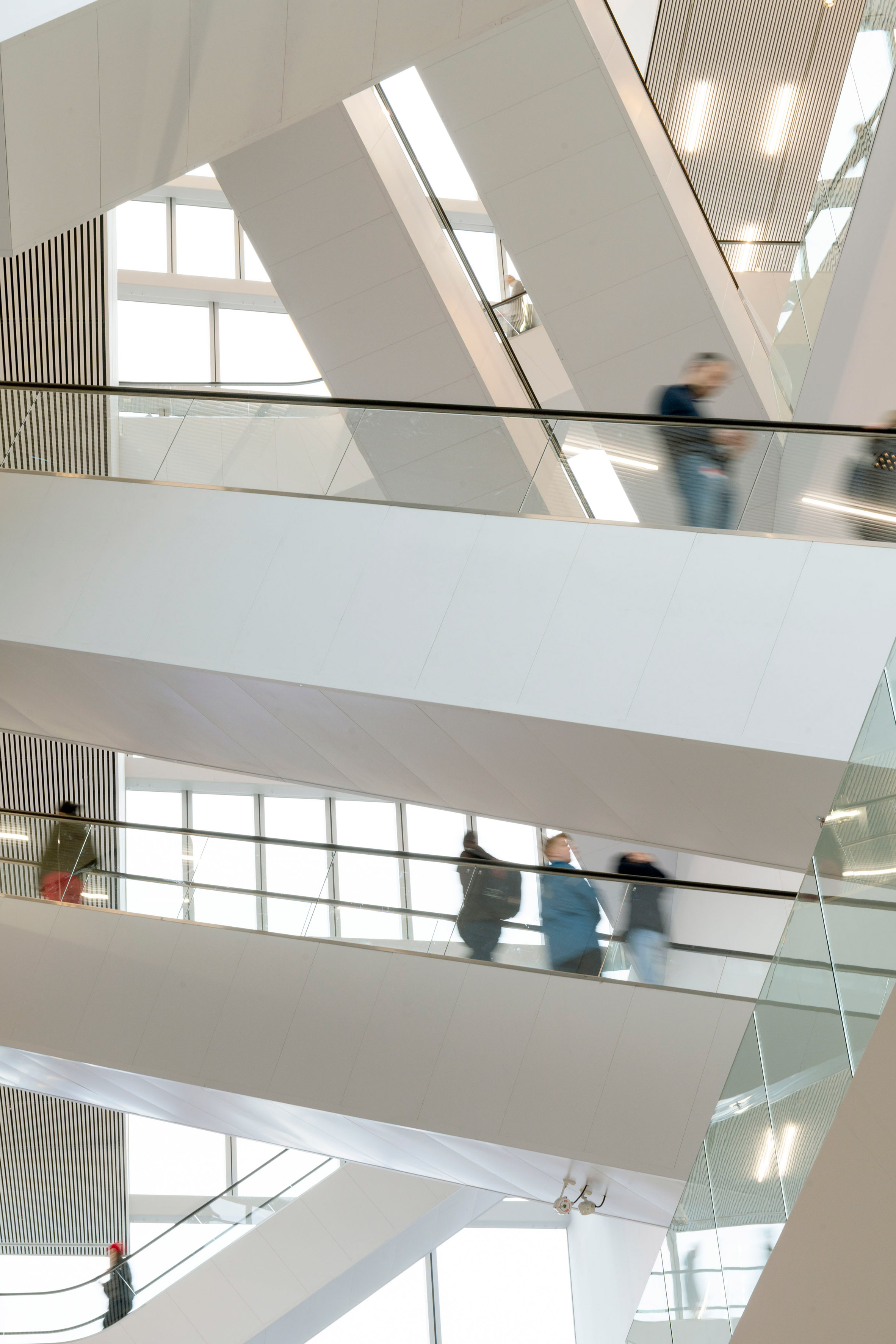 This concept is strengthened by the way that some floors step up incrementally, so different functions are able to overlap.

“We had a strong intuition that the building should appear and function as one, that it should not be a fragmented collection of amenities but a fully integrated whole,” explained Klaasse. 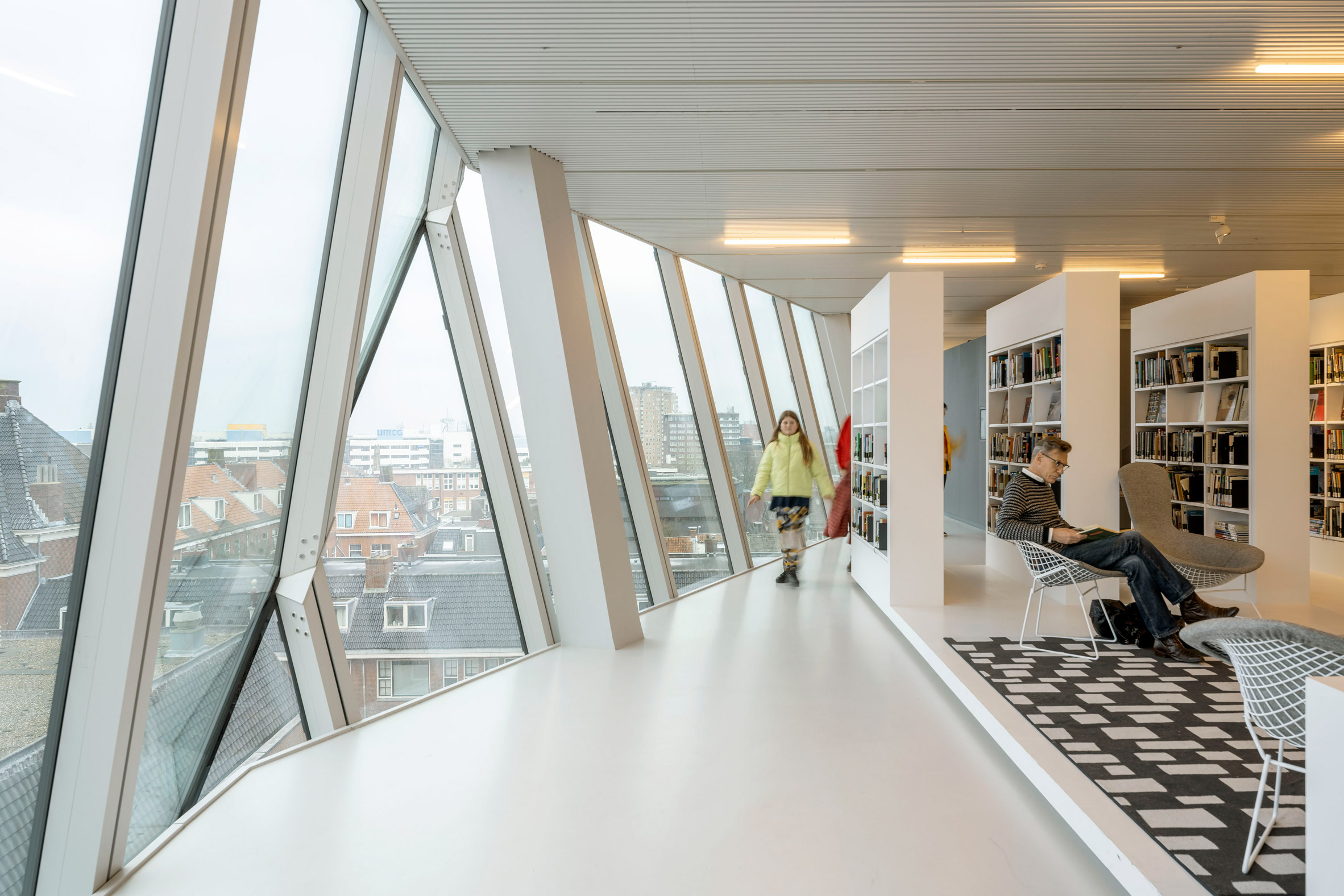 “To support this idea of inviting people freely into all the pores of the building, the vertical component of the atrium is very helpful; it serves as a kind of capillary function to transport people to the upper levels,” he added.

“Like Super Mario, you can bounce your way up to the top.” 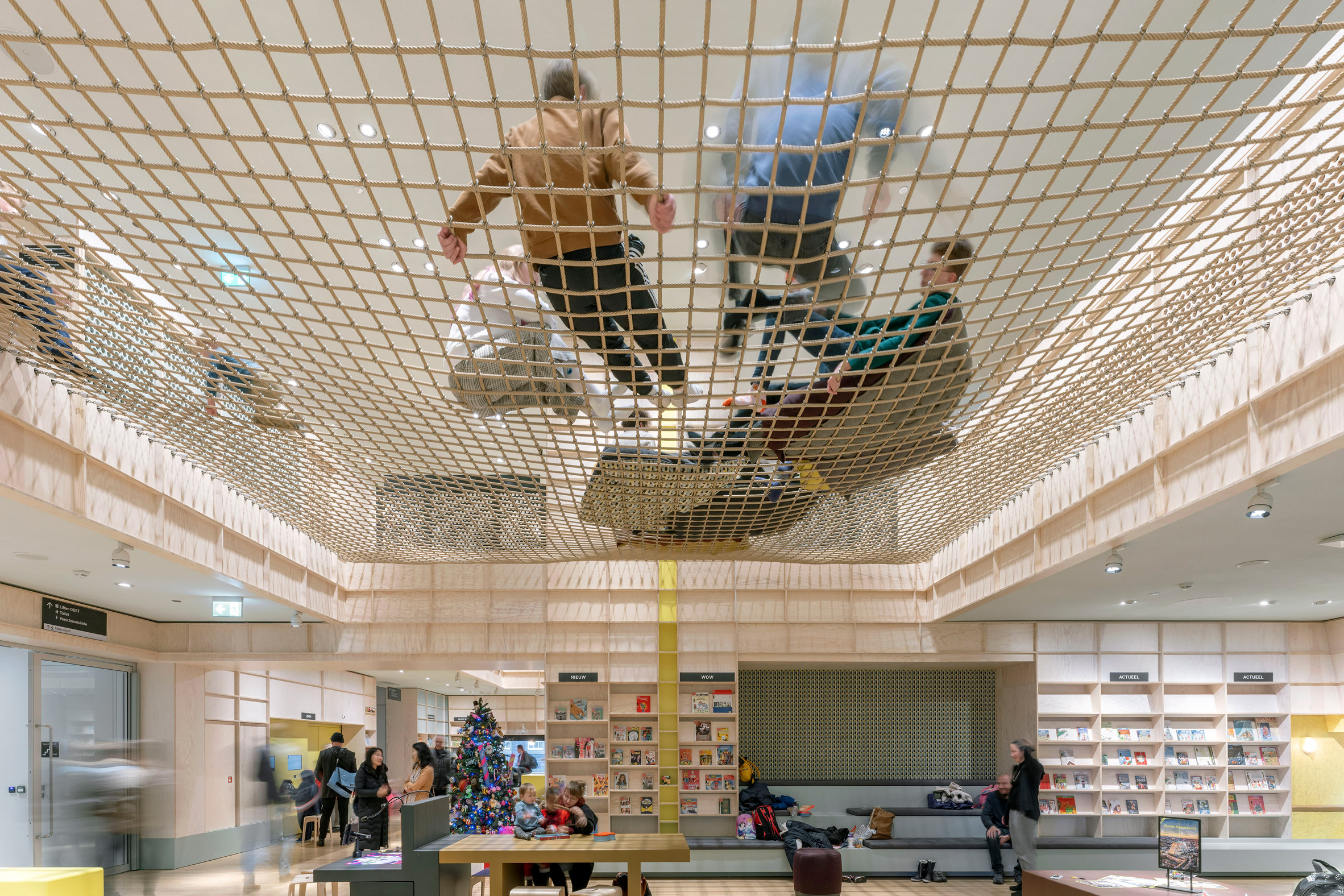 Forum Groningen is one of the biggest projects to date for Amsterdam-based NL Architects, which Klaasse founded in 1997 with former Delft University classmates Pieter Bannenberg and Walter van Dijk.

The trio typically work on small and medium-sized projects, like the Scholencampus De Vonk school in Belgium and the Funen Blok K housing block in Amsterdam .

The studio has been a wildcard entry into the 2006 design competition for Forum Groningen, thanks to the support of city architect Niek Verdonk. Despite being pitted against the likes of Zaha Hadid Architects and UNStudio , it came out top. 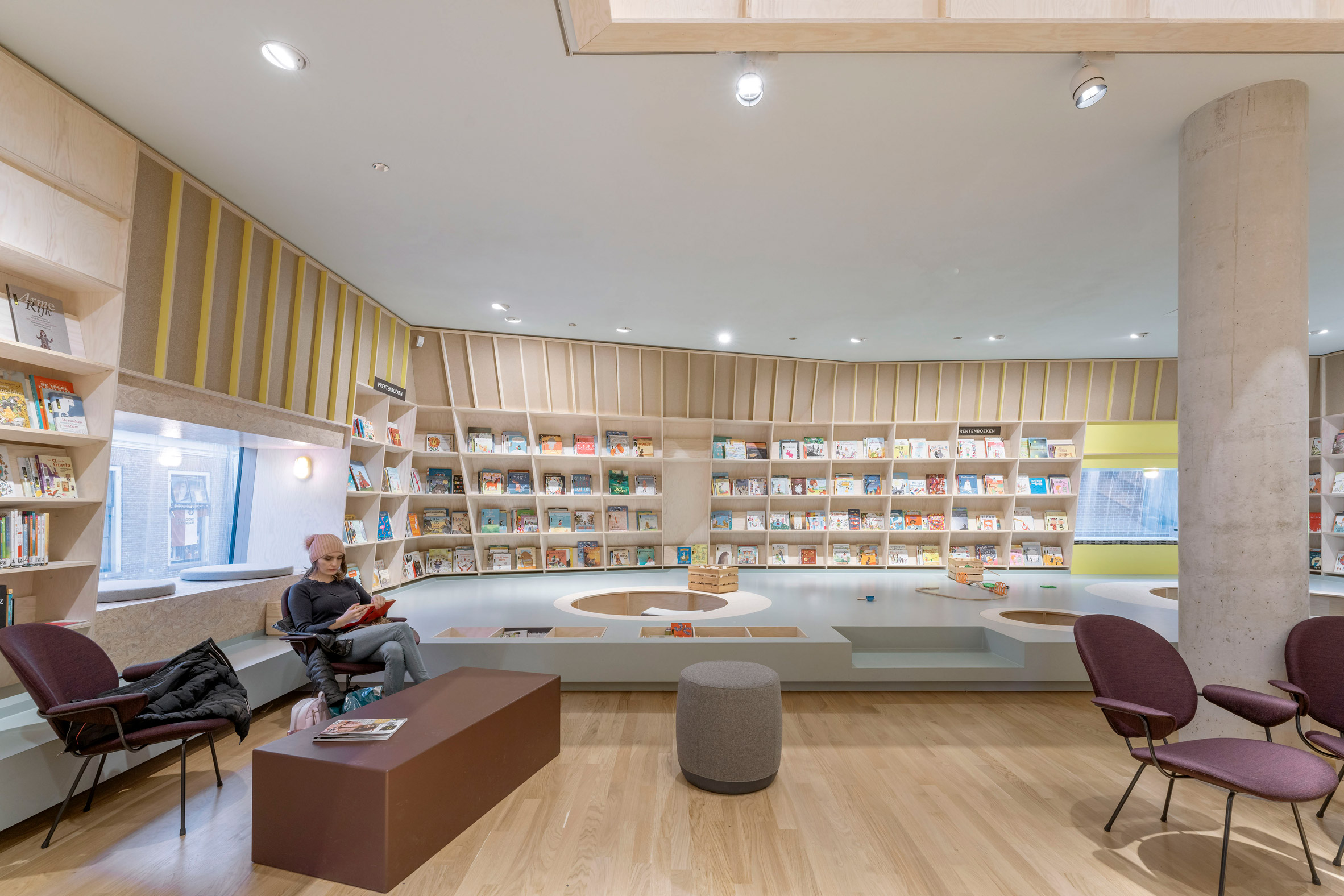 The building officially opened at the end of November, 15 years after it was commissioned.

Although it had 20,000 visitors in its first two weeks, NL Architects plans to monitor it closely to ensure it becomes an active public space, as intended. 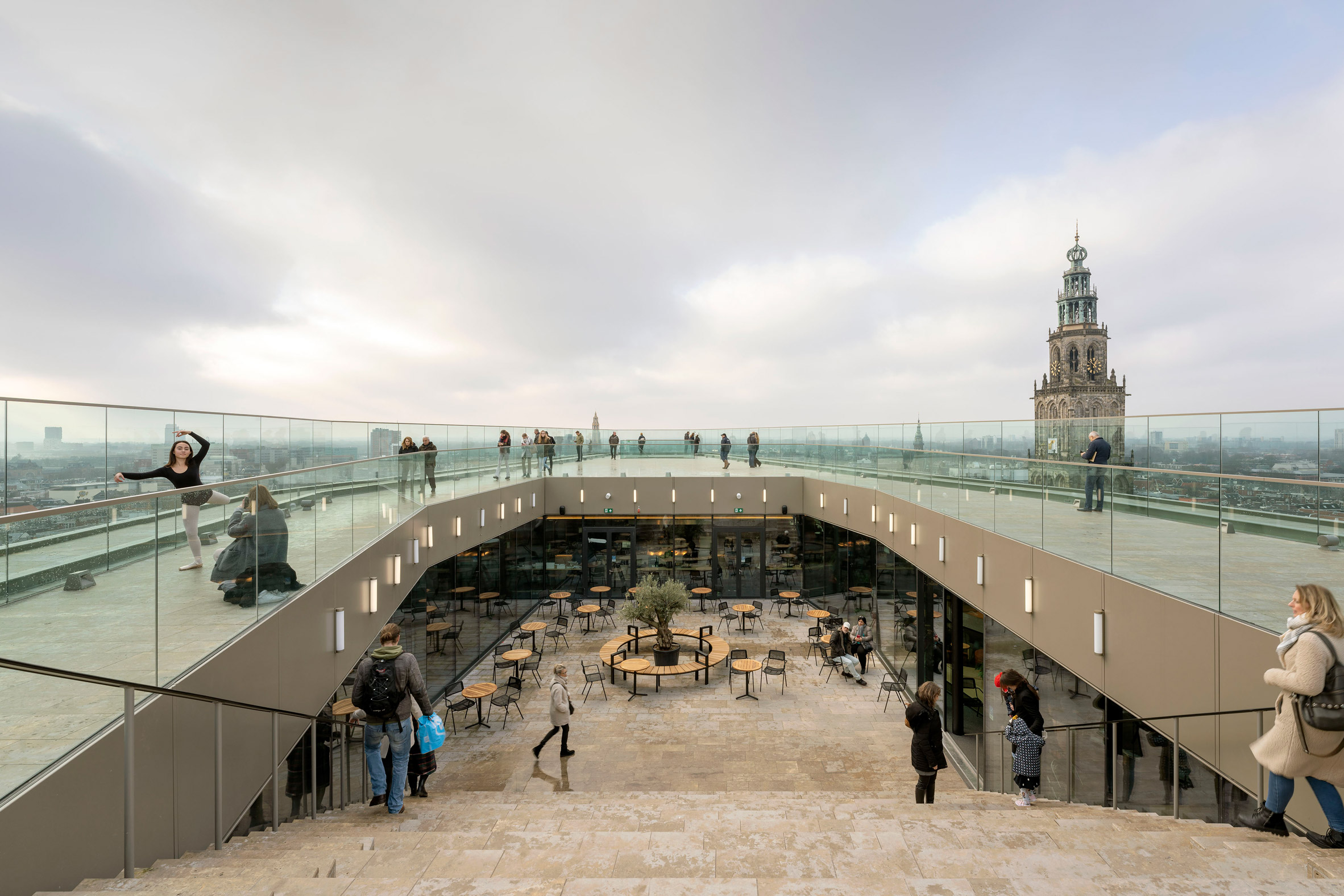 “Each new building in a way is a hypothesis,” said Klaasse. “Both programmatically and typologically, the Forum is speculative.”

“The roof terrace, with its 360 view over the city, is a huge magnet. But things will settle down and hopefully soon we will be able to see if it really works.”

Photography is by Marcel van der Burg courtesy of NL Architects & ABT.