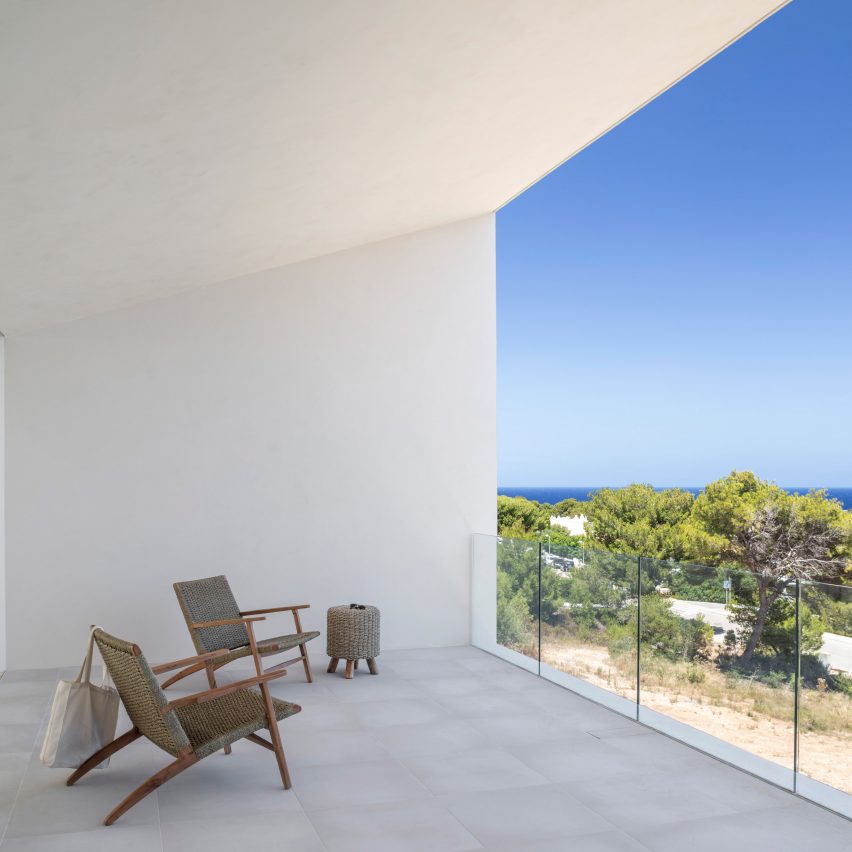 Large openings all along the front of the concrete facade of Frame House on the Spanish island of Menorca frame expansive views towards the sea.

Frame House was designed by Barcelona-based Nomo Studio as a summer home for a family. It occupies a steeply sloping site in the resort of Coves Noves on the island’s northeast coast. 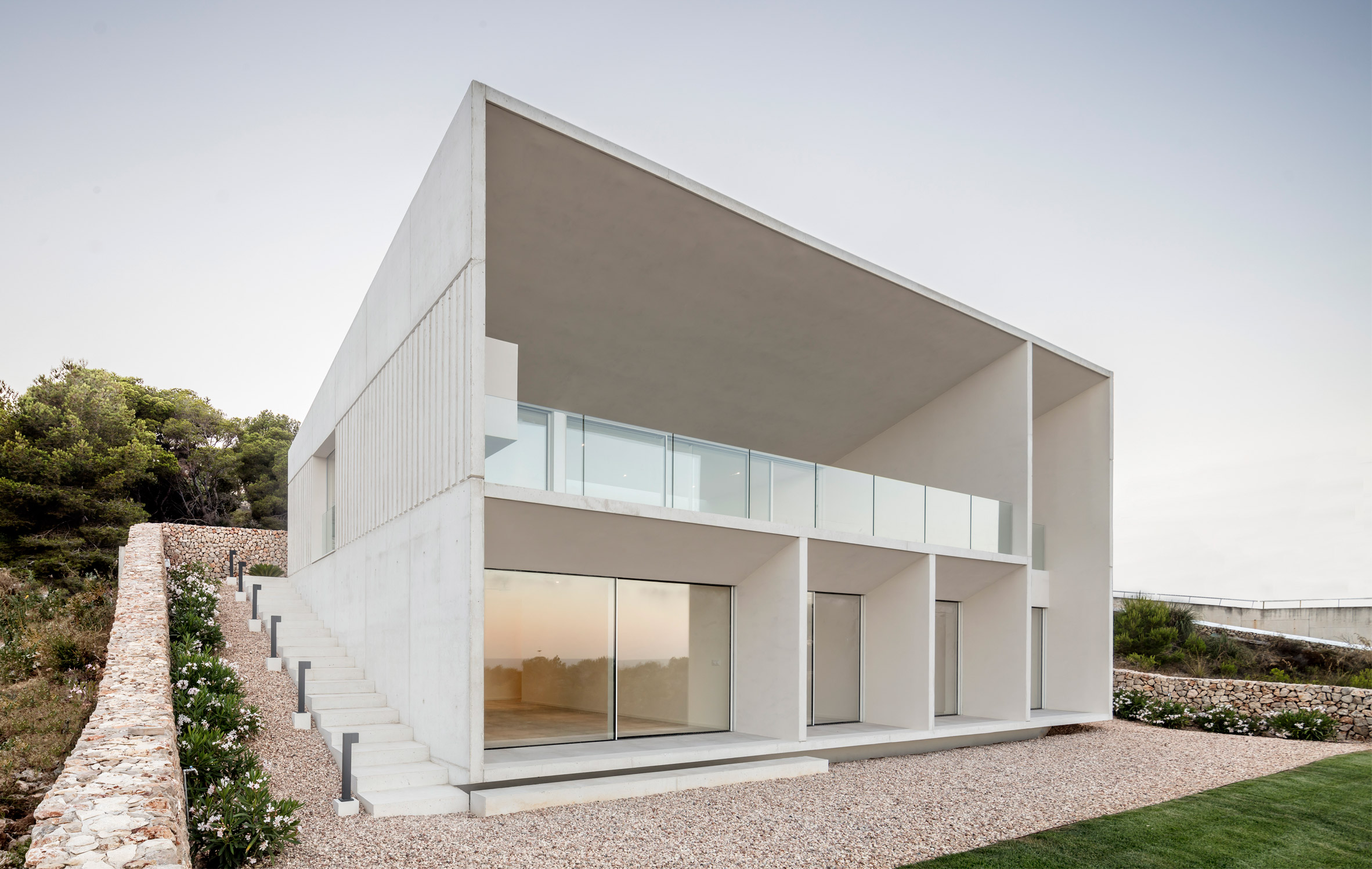 The house’s position and arrangement are informed by the plot’s sloping topography, as well as by local building regulations and to prevent a neighbouring property blocking the views.

Situated on the upper portion of the site , its main living areas are positioned on the first floor to ensure they enjoy the best views towards the Mediterranean Sea. Only the master bedroom is accommodated on the same level as the living spaces, with the rest of the bedrooms located on the ground floor, along with a dedicated lounge area.

The decision to position the master bedroom on the first floor means this level can function like a self-contained loft apartment that is easy to manage if the owners want to visit for a short stay. 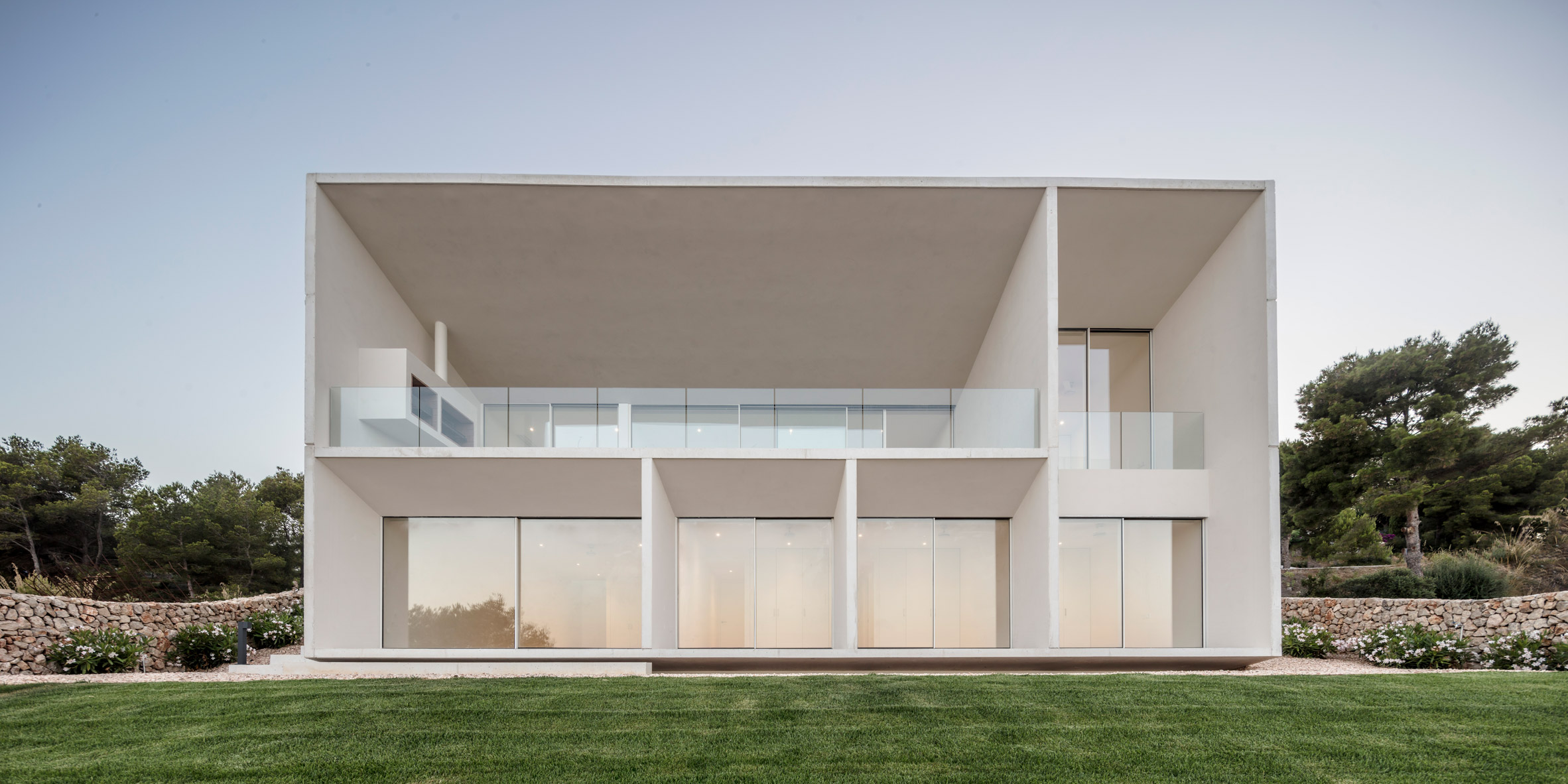 The lower level is treated like an extension that can be occupied when the couple’s children or guests come to stay.

The property’s simple geometric form is constructed from concrete, which was cast in-situ to create a robust aesthetic that maintains a sense of privacy when the house is viewed from most angles. 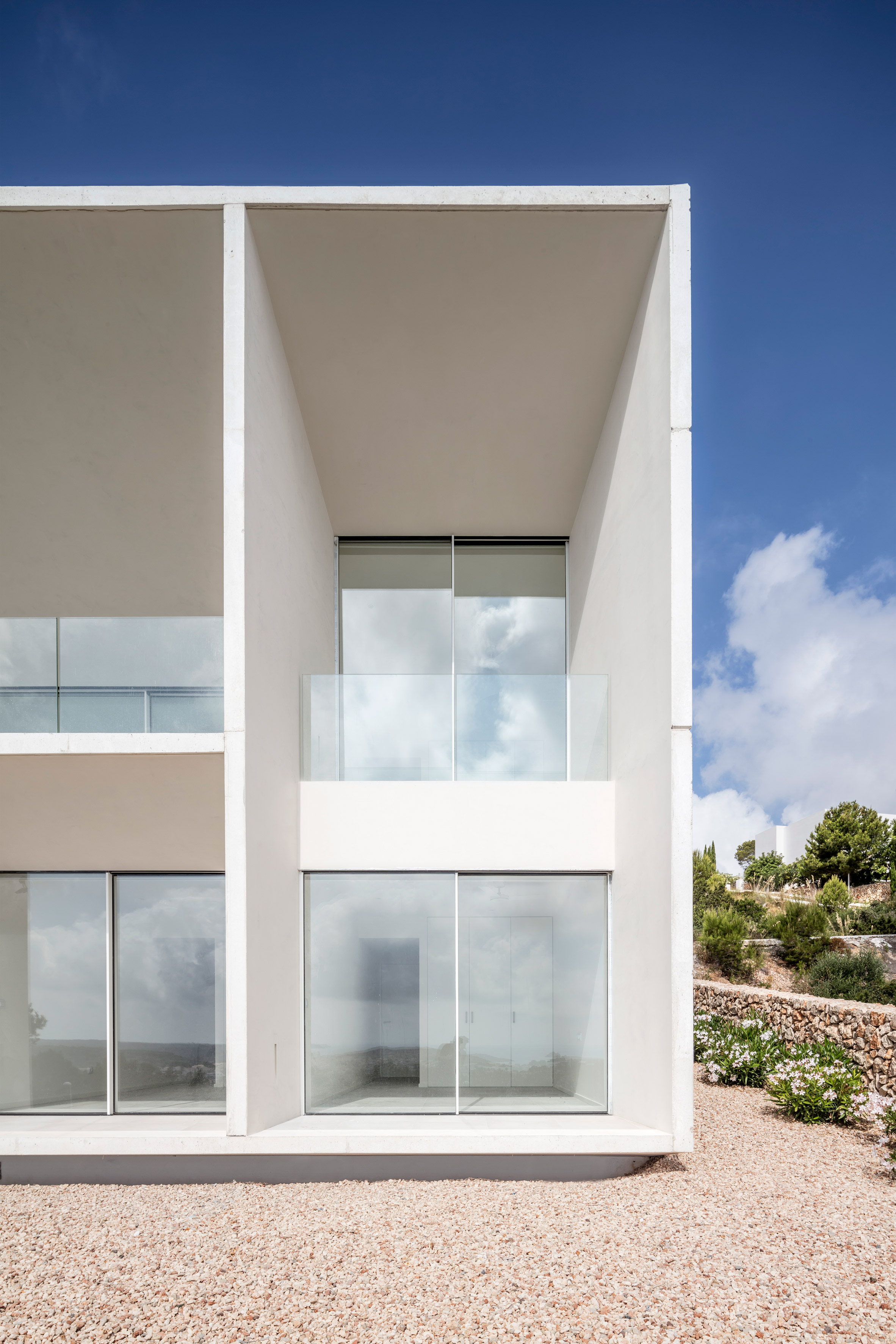 “The strong contrast between the openness of the sea-view facade and the opacity of the side and back facades create a strong framing effect,” Nomo Studio said.

“To further enhance this gesture the roof is inclined, opening up towards the view and the whole front facade is glazed from floor to ceiling with large sliding windows.” 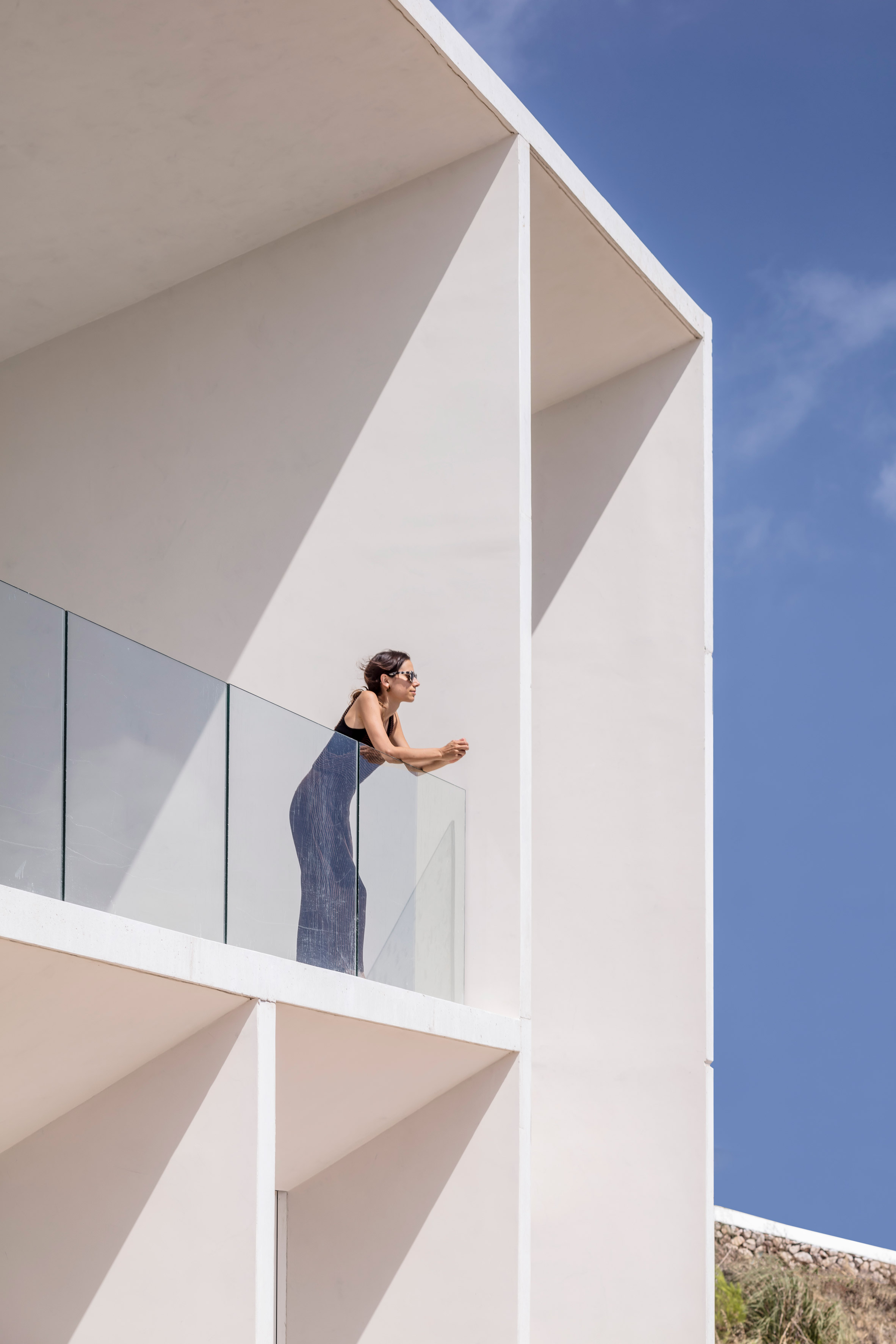 The glazed surfaces lining the kitchen and living room open directly onto a 43-square-metre covered terrace that functions as an extension of the interior during social gatherings.

The house’s roof is made from prefabricated hollow-core slabs more typically used for industrial building projects. This enabled the creation of an 11-metre column-free span that ensures there are no interruptions to the views. 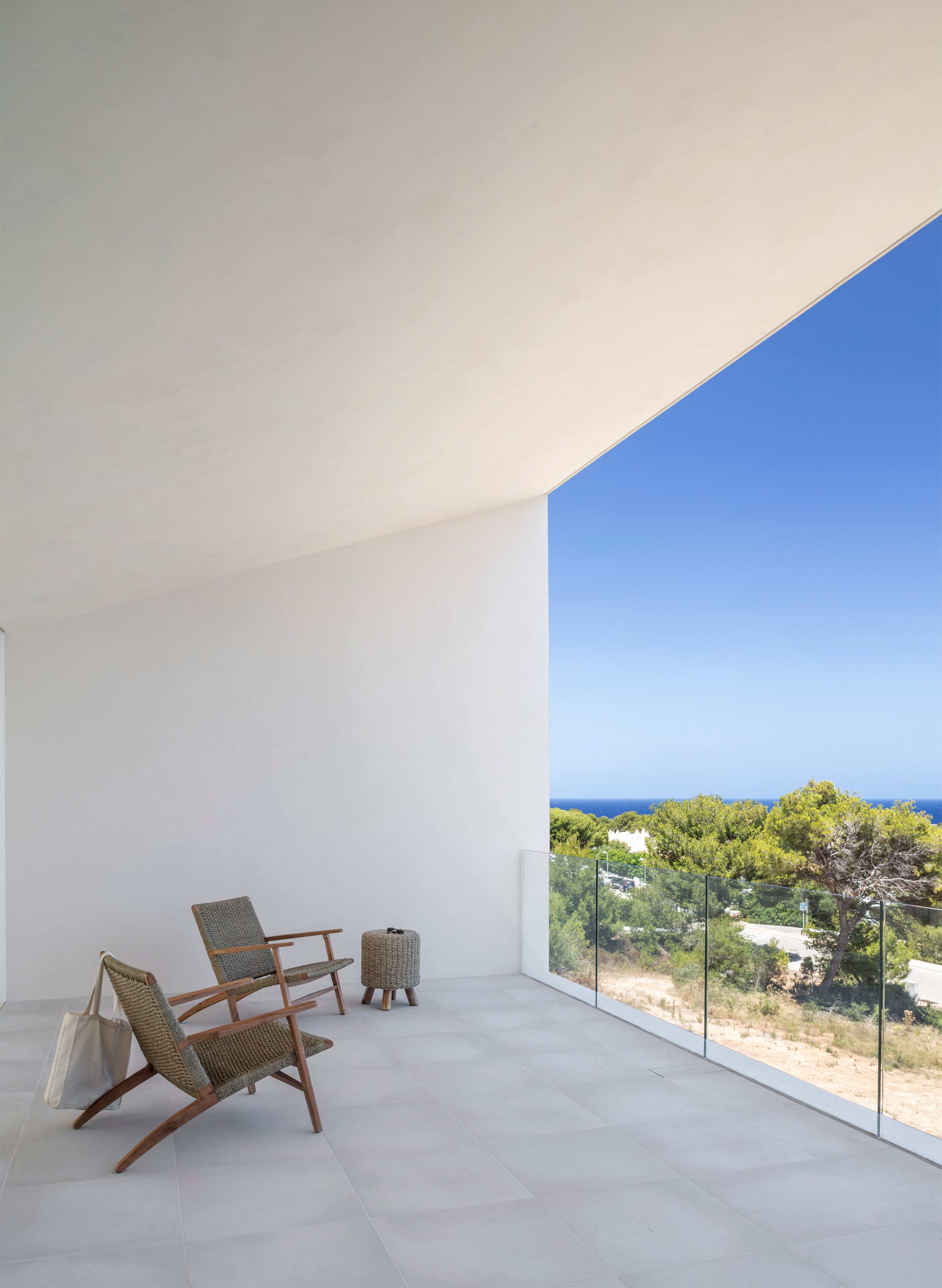 One of the prefabricated concrete elements was removed to make space for a large frameless skylight that allows daylight to reach the otherwise windowless spaces to the rear of the living areas.

The master bedroom at one end of the first floor also opens onto a private balcony that is completely separate from the shared terrace alongside it. The children’s rooms on the lower level each have their own terrace and bathroom, which allows these spaces to feel more private and self-contained. The concrete chosen for the building’s facades is capable of withstanding the harsh maritime climate and will age attractively over time. A band of vertical stripes creates a relief pattern around the upper floor that incorporates the doors and windows.

Other Spanish homes making the most of their views with concrete include a house in a nature reserve by Narch with sliding glazed doors, and ring-shaped residence in a forest by Office Kersten Geers David Van Severen.

Photography is by Adrià Goula.