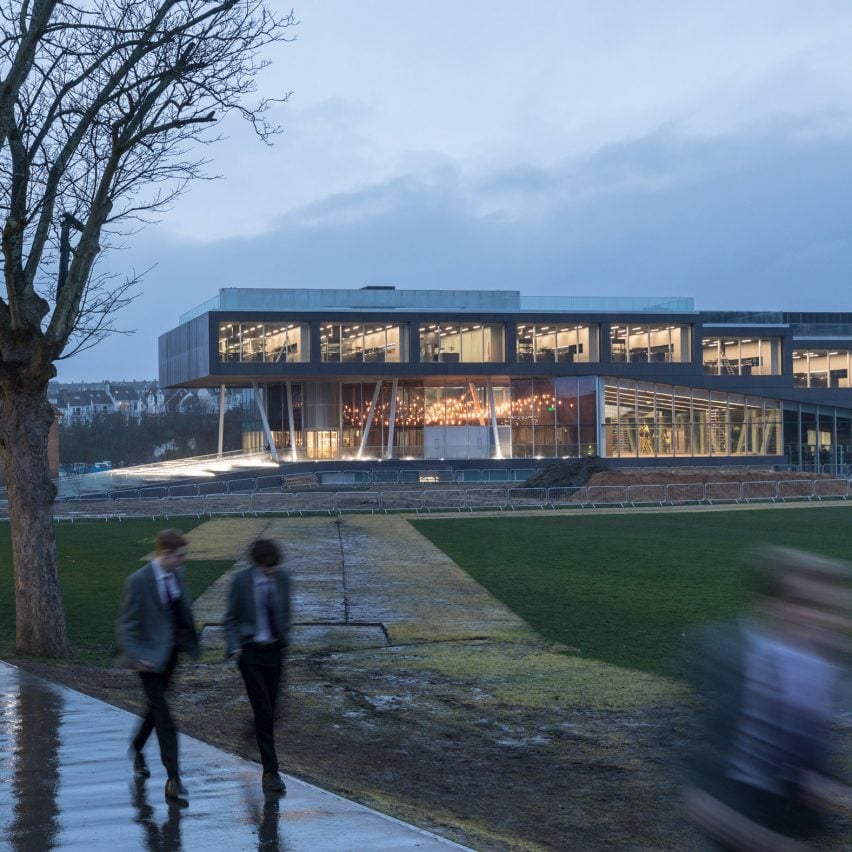 Dutch architecture studio OMA has unveiled the School of Science and Sports at a historic college in Brighton , which merges academic and athletic facilities in one building.

The linear block, which is located alongside Brighton College ‘s main playing field, is OMA’s first sports building and its first major project at a secondary school.

“Its always nice to do a first as an architect as you need to find out about a lot of new things – like cricket and rugby – and we are champions of questioning everything,” said OMA partner Ellen van Loon. 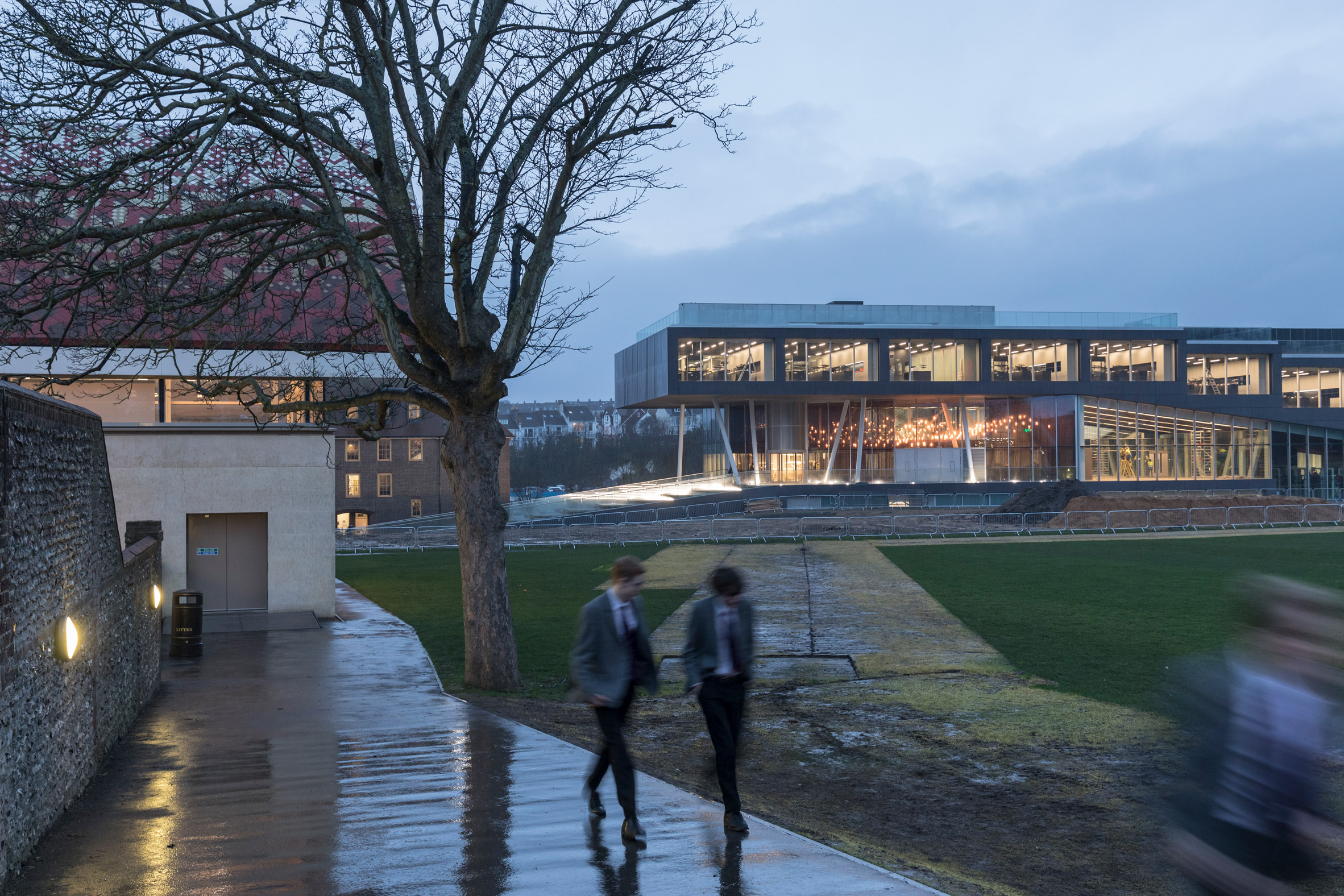 The building contains facilities for both sports and science departments as the college’s headmaster wanted to break down some of the barriers between departments.

“Our brief was to find a way to connect the sciences of chemistry, physics and biology with the science of sport,” explained Brighton College headmaster Richard Cairns.

“Buildings can either break or enforce a silo mentality [between departments], and here Ellen has broken down silos.” 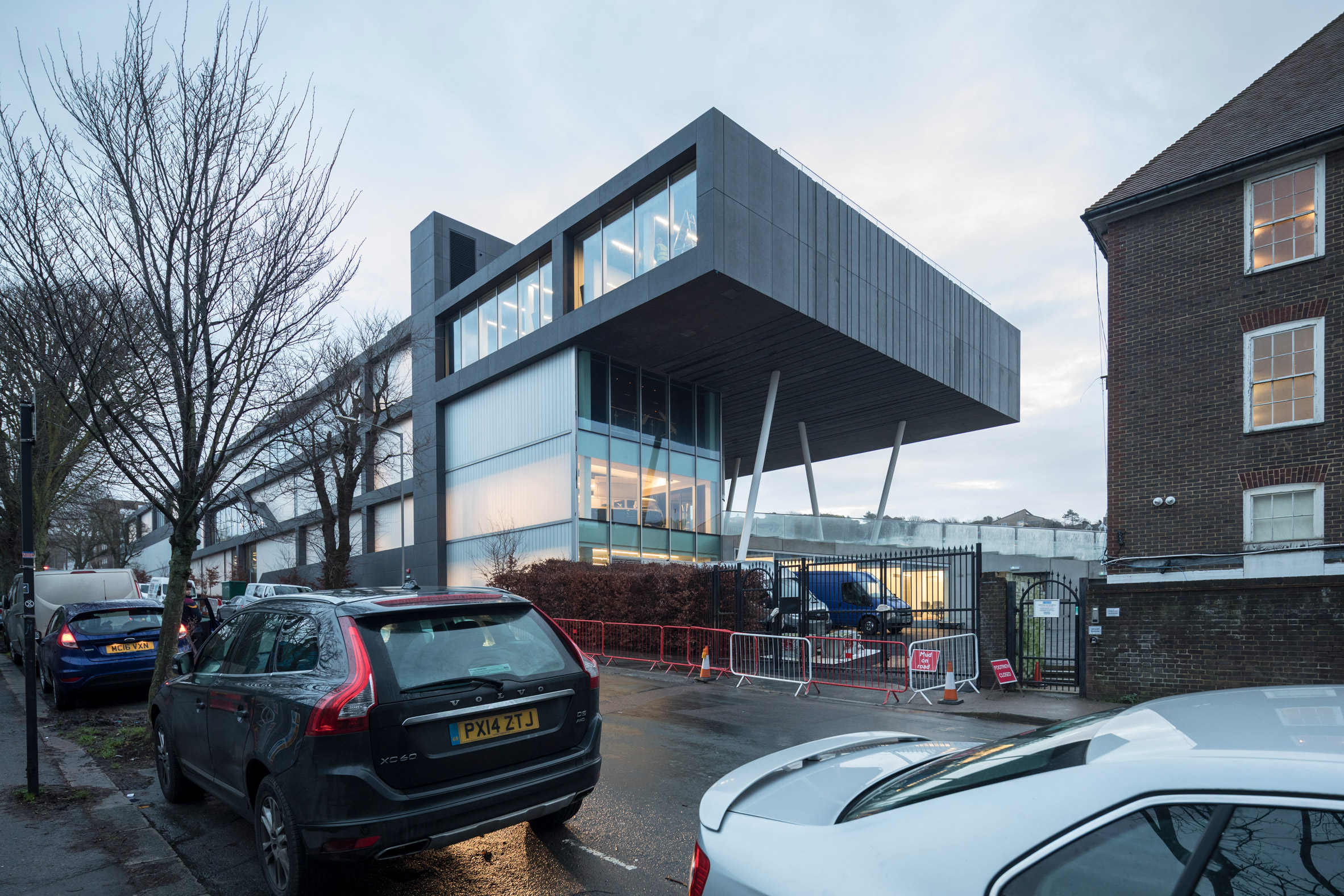 The majority of the building’s sports functions are on the ground floor, with the science department’s classrooms on the upper floors.

“The original idea was for a more conventional arrangement with sports and science on either side of an atrium,” van Loon told Dezeen.

“But being OMA we thought ‘lets mix things up’. Also it made more sense to have the sports facilities on the ground floor alongside the sports field with the science laboratories above.” 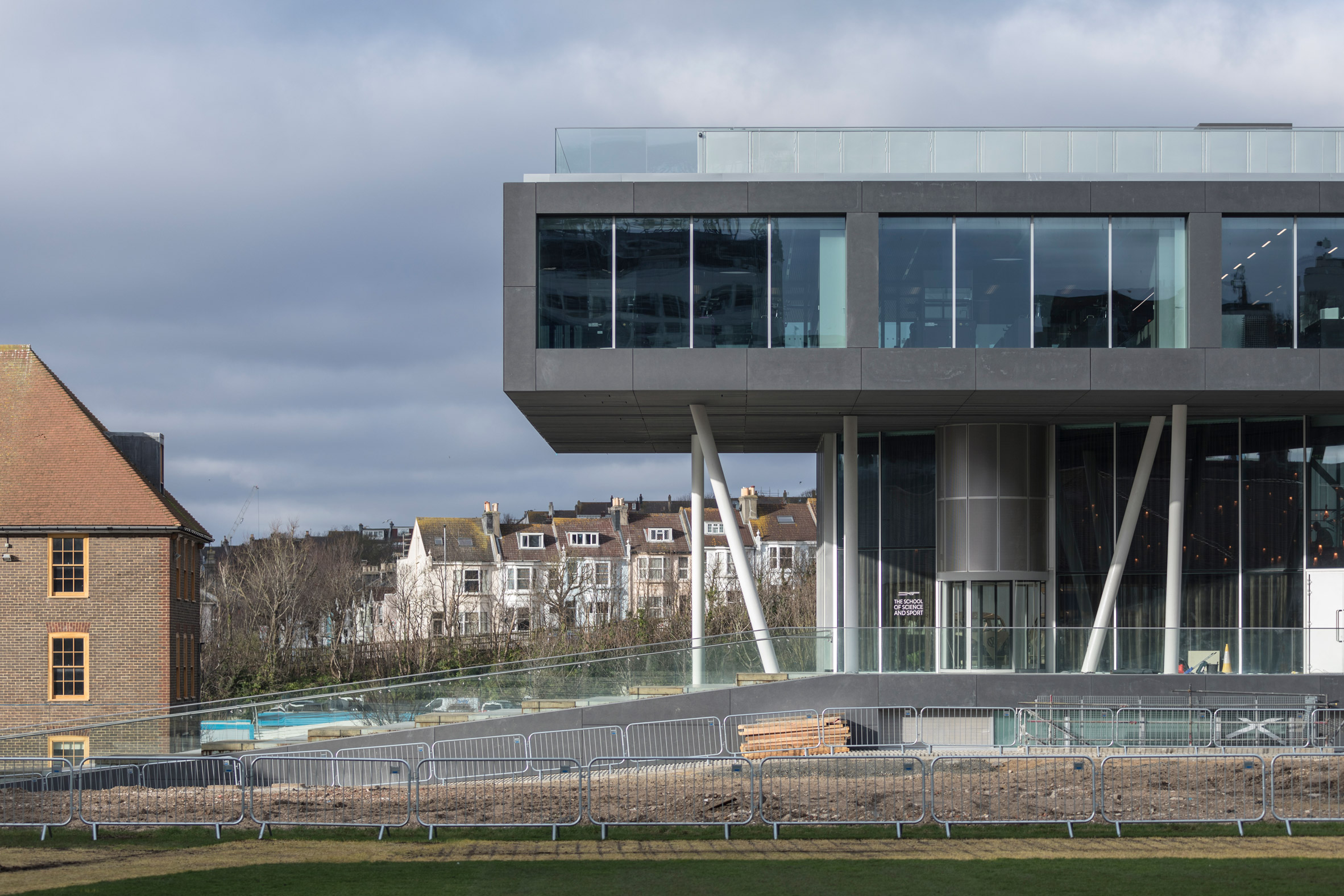 On the ground floor the building’s entrance, which leads to an atrium with a cafe, is located under a portico supported by angled steel pillars.

From here the sports facilities are arranged along a corridor with the double-height gym, weights room and the offices of the physical education department all having glass walls that have views across the sports field. 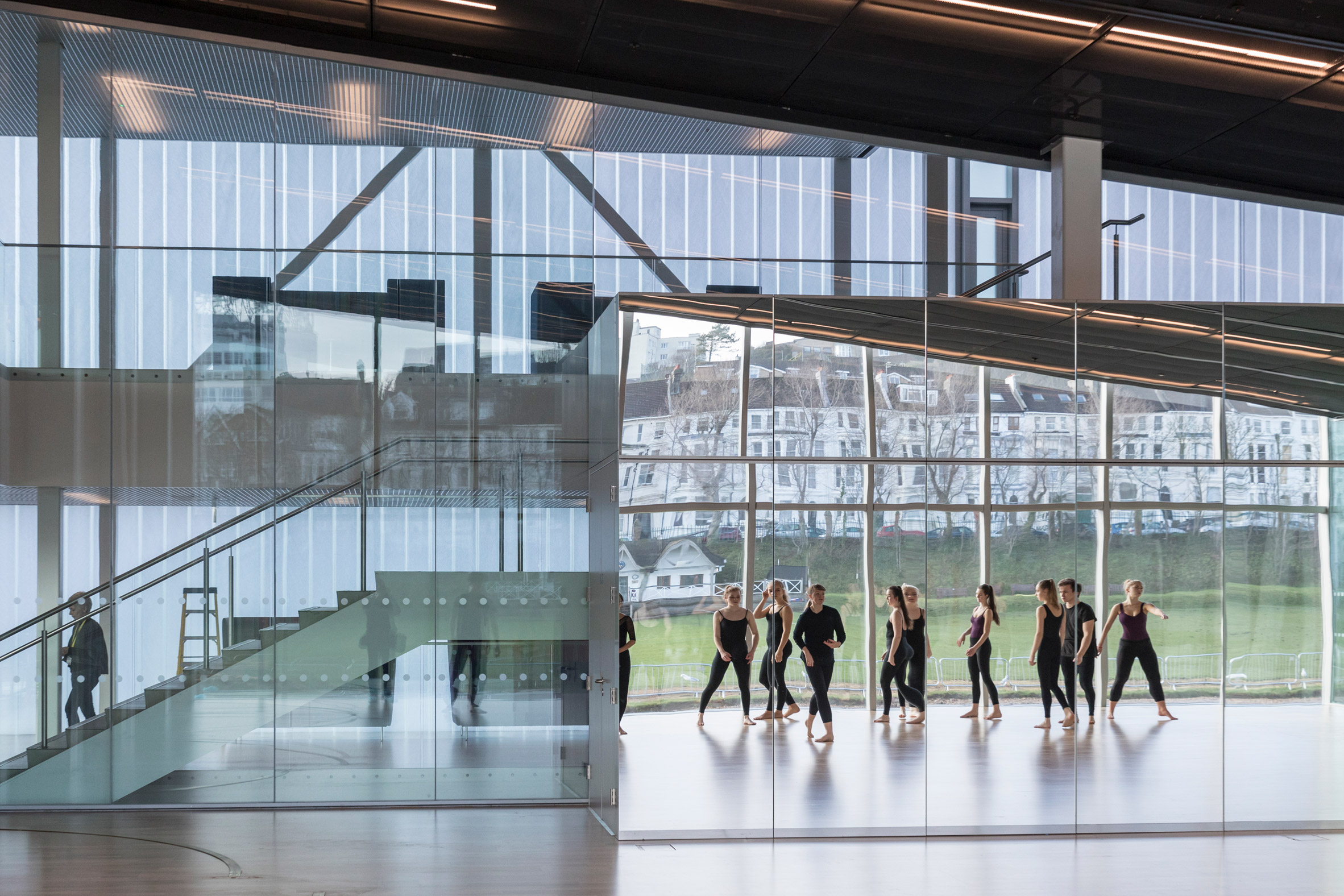 At the end of the block is the multi-purpose sports hall, which has also has two fully glazed walls and opens on to the adjacent sports field.

In the basement there is a swimming pool and changing rooms for indoor and outdoor sports. There is also an underground carpark in the basement that is accessed by a lift. 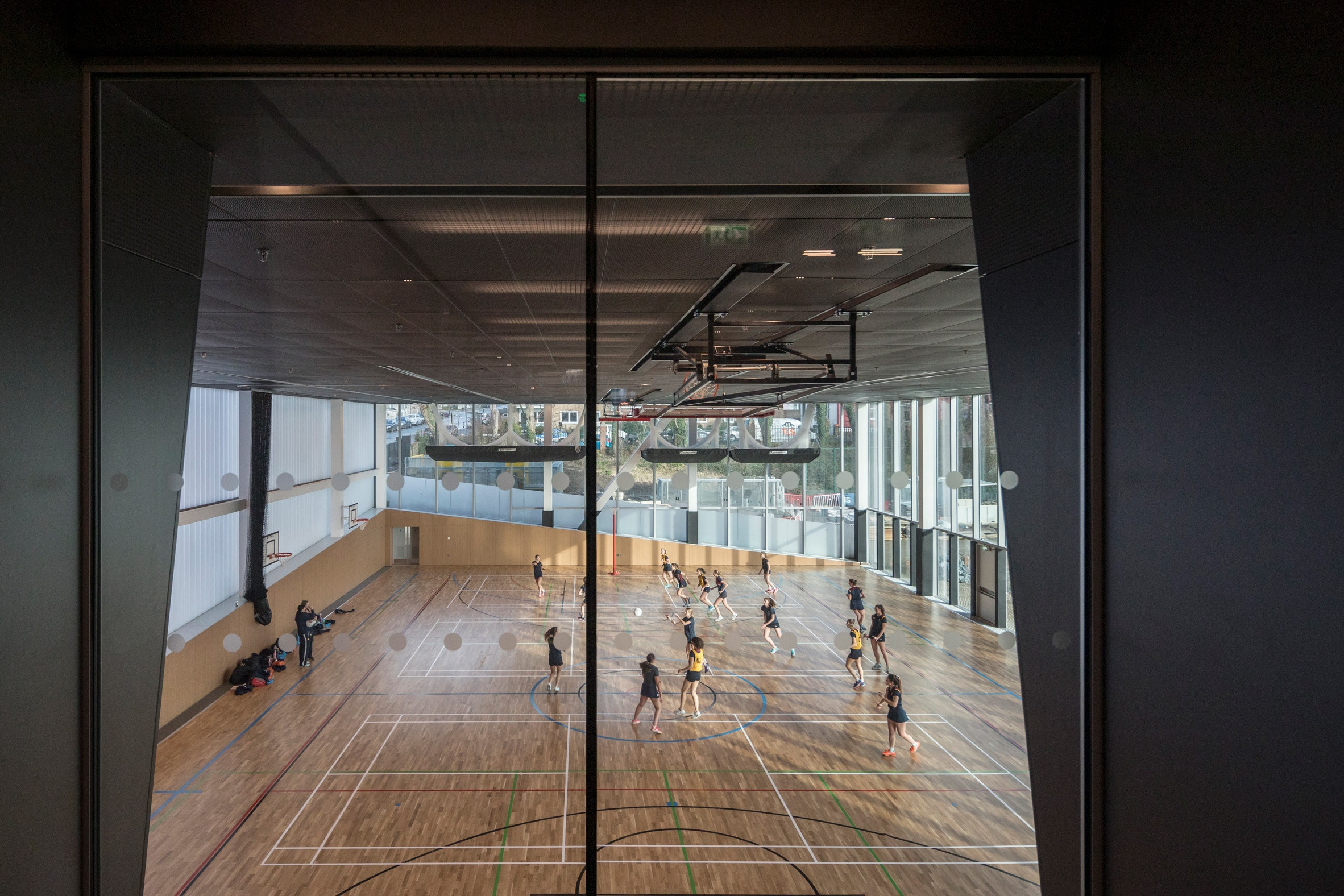 Above the sports facilities, wide stairs lead to the science department. On the first floor there are classrooms and laboratories arranged around the double-height spaces below, along with a cinema room.

A wide staircase with stepped laboratories alongside it leads to the second floor, which contains the rest of the science school’s rooms. 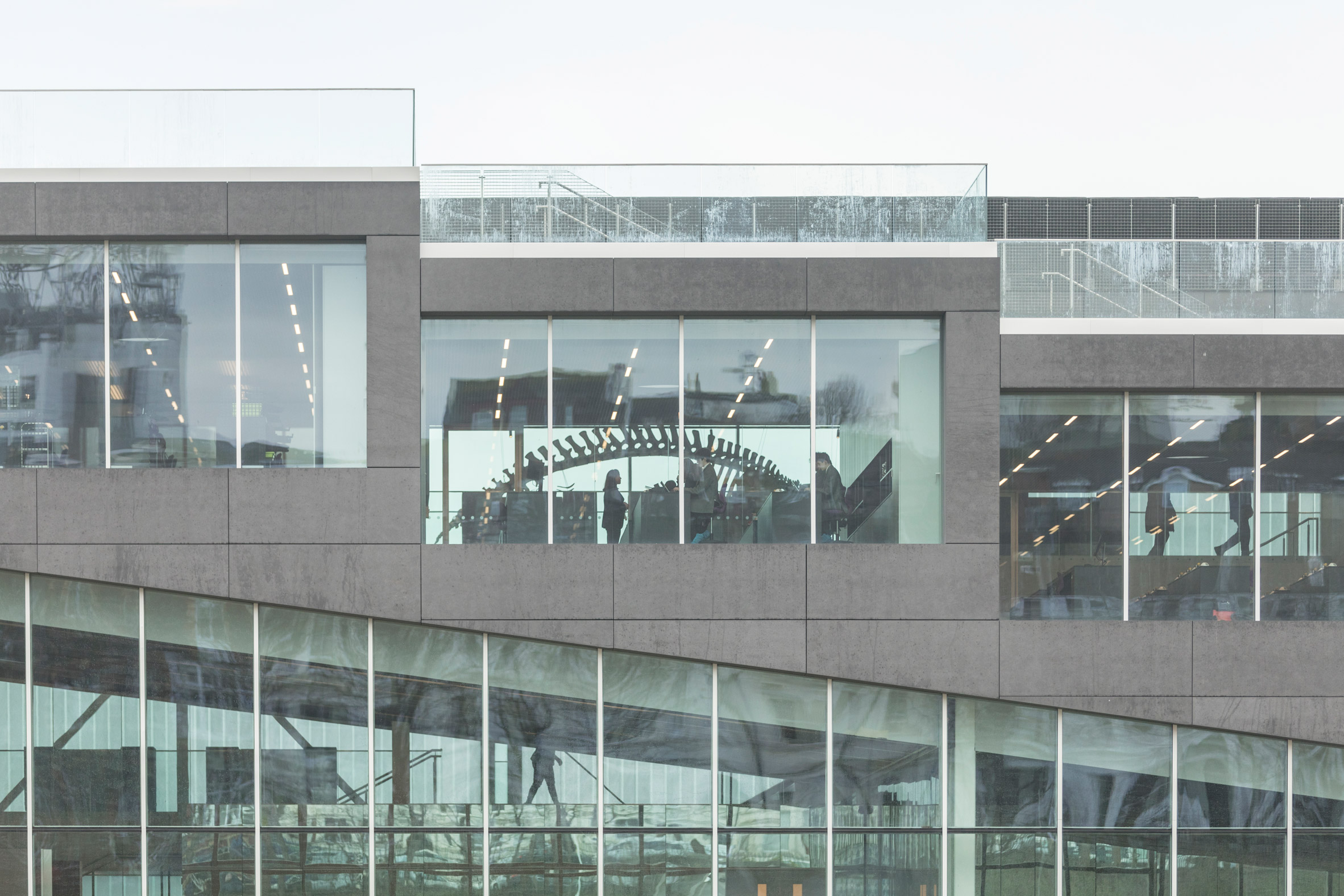 “It was important to provide additional spaces that are not formal educational spaces, they are informal breakout spaces,” said van Loon.

“These are places where students can do individual projects. This is what I did at school and I’d love to see here.” 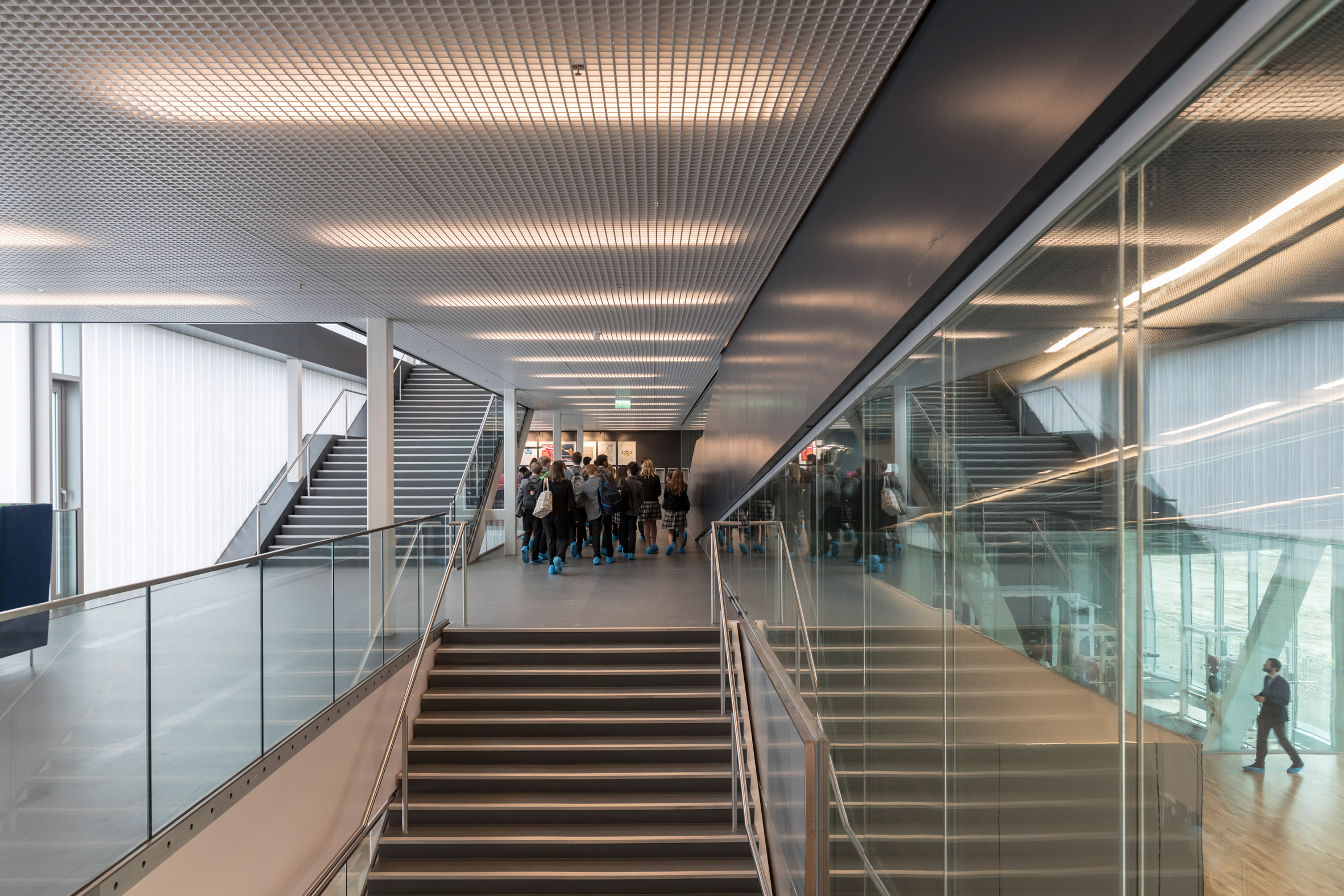 All of the laboratories have full-height glass windows that look out onto the playing field and all of the rooms have glass walls alongside the corridors.

“Instead of making an atrium we created a fluid trajectory through the building, that means that you get to experience all its functions as you go up it,” explained van Loon.

“For me what was important was that when you go through the educational building you can see the science – seeing the science taking place makes it more accessible.” 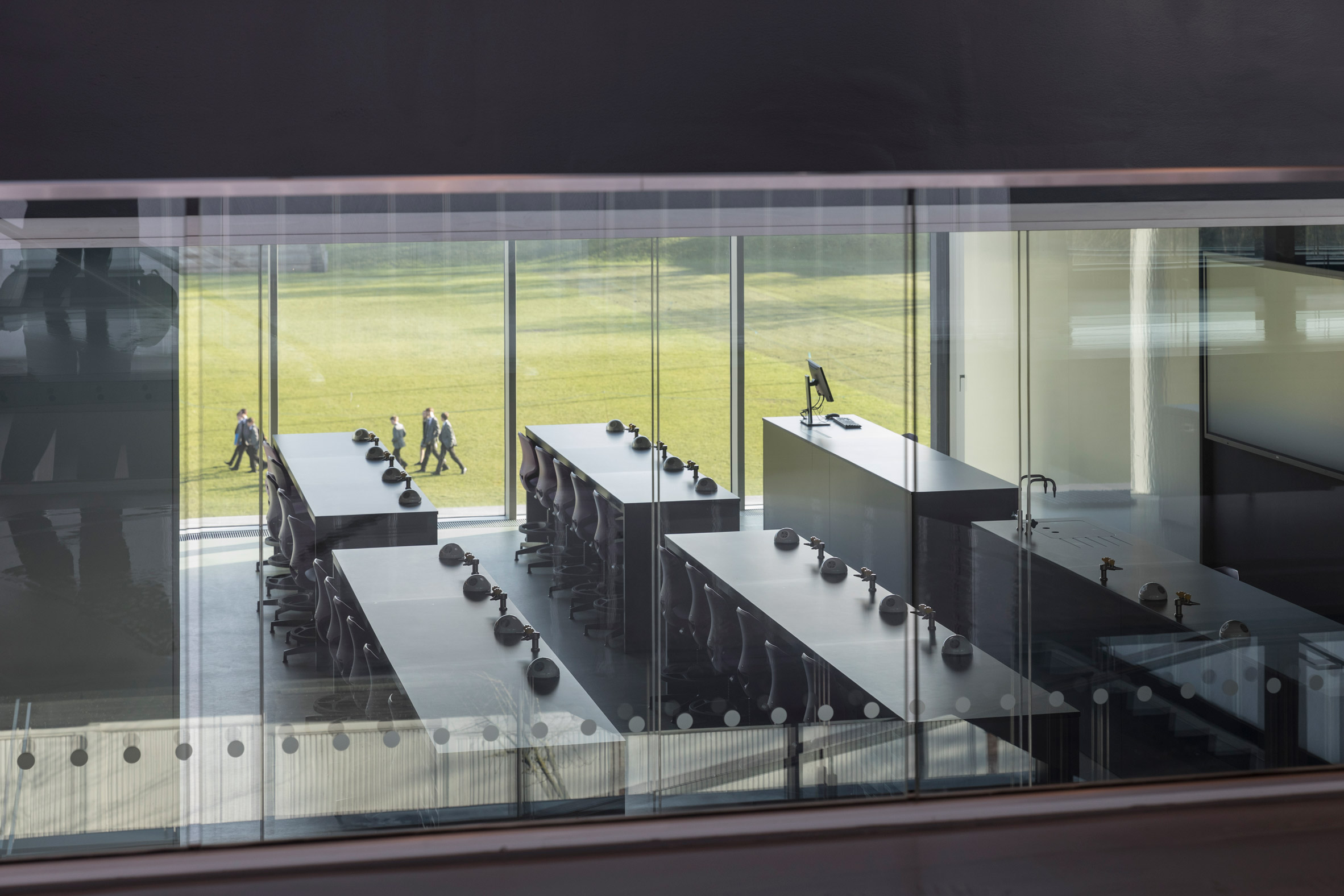 The building is topped with a roof garden that overlooks the school and the playing field that it runs alongside.

It contains spaces that can be used for teaching along with a running track. 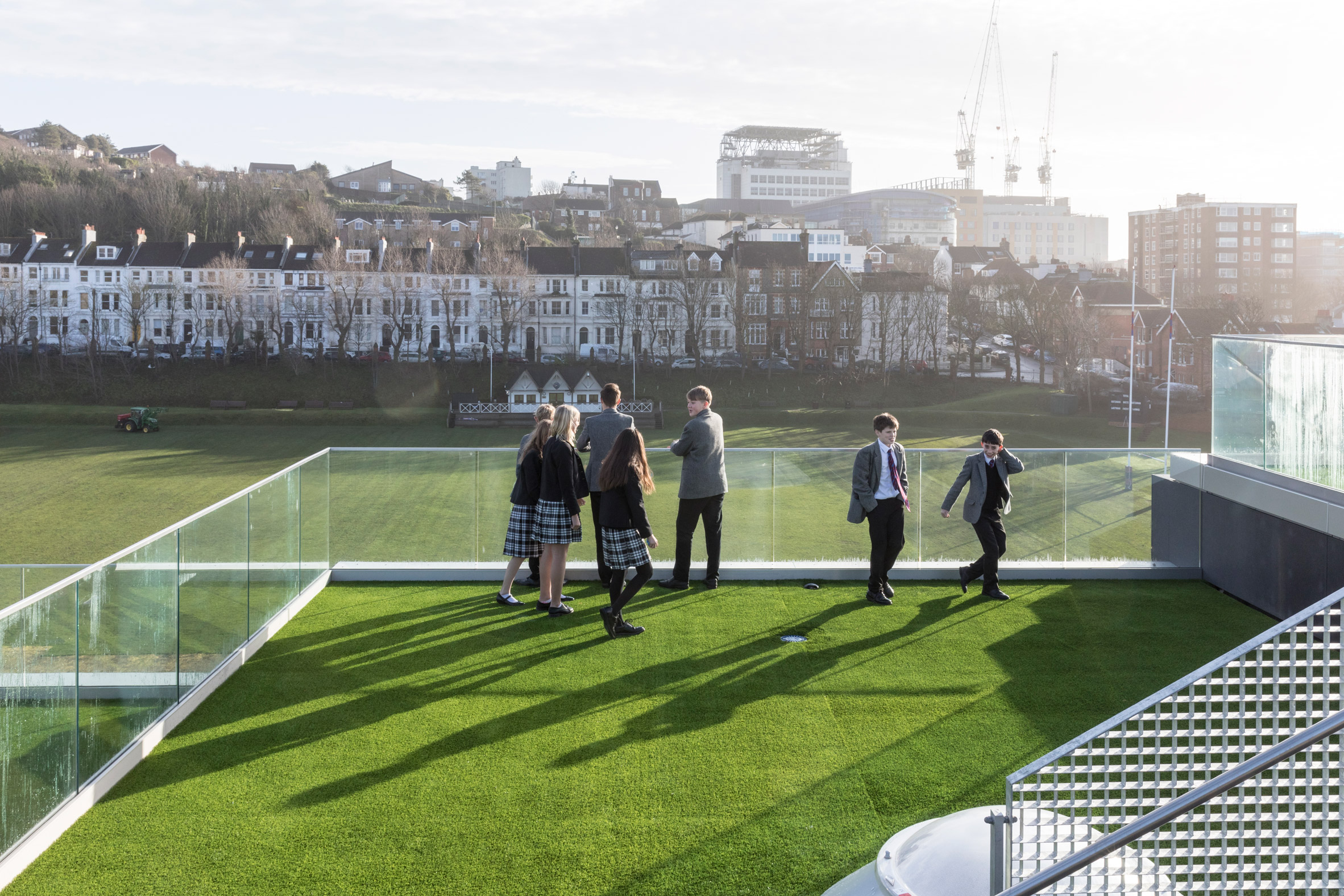 The School of Science and Sports stands opposite a row of terraced houses, and the building is a “modern interpretation” of these facades said van Loon.

“What I most like is that this building finishes the perimeter of historic buildings,” she explained. “Its a modern interpretation of the structure of the terrace imprinted on our building.”

“The inspiration for the facade was the regular rhythm of the typical terraced houses opposite,” she continued. “They have different units of rooms and we translated that into a concept called the skeleton. The laboratories and sports facilities are slotted into that skeleton.” 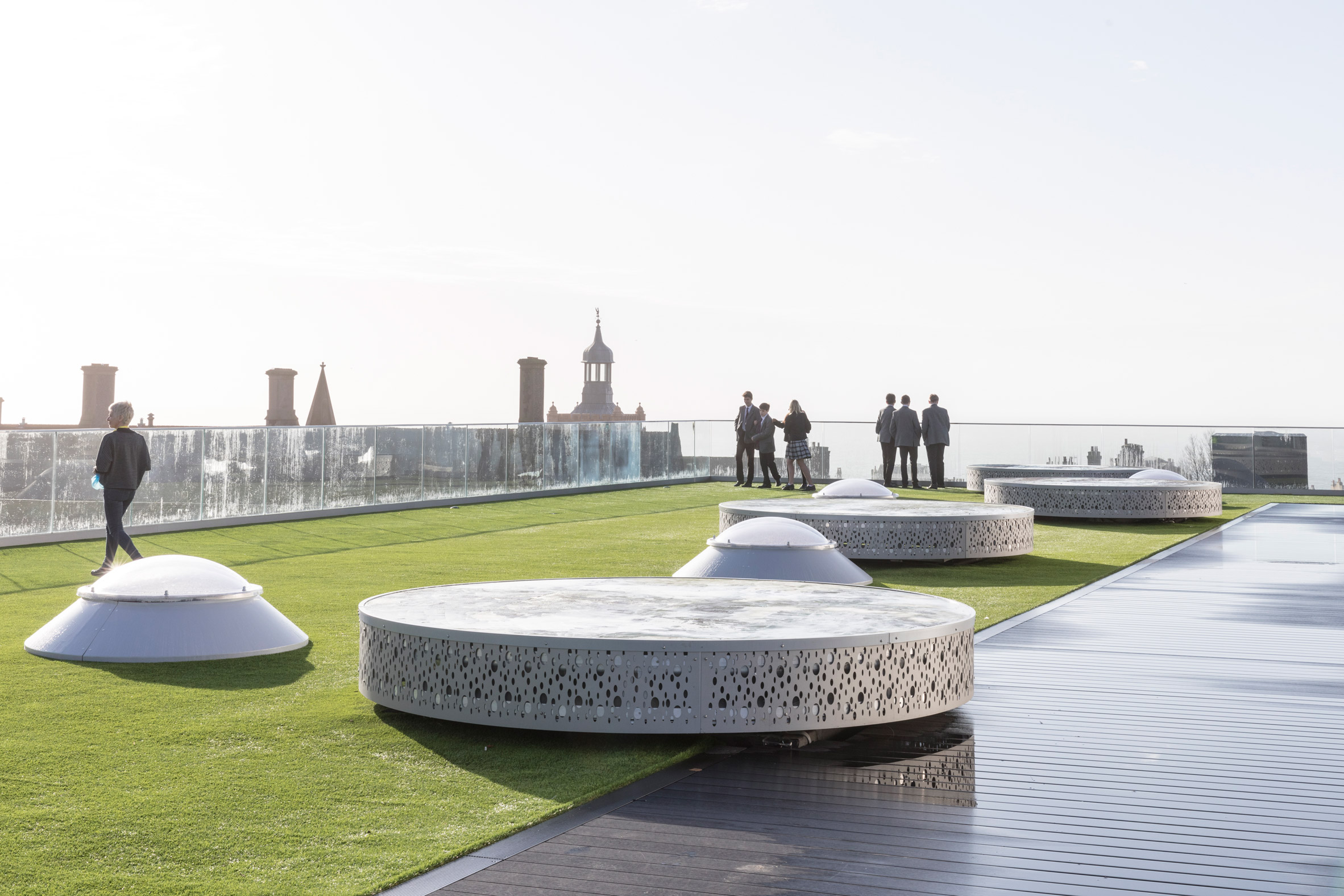 OMA’s block is the latest stage of the major development at the historic college, which has a campus of 19th century buildings designed by George Gilbert Scott and Thomas Graham Jackson.

Over the past decade a series of what Cairns described as “beautiful, but polite buildings by some of Britain’s leading architects,” have been built on the site. These include a boarding house and an amenities building  by Allies and Morrison , a classroom block by Hopkins Architects and a Music School by Eric Parry Architects .

The next project being built as part of the development of the site is a performance arts centre that will be designed by emerging Dutch practice KRFT. The college’s headmaster picked the architect for this building after seeing a theatre designed by the studio in the Dutch town of Laren on Dezeen.

“I actually found our next architect on your site,” Cairns told Dezeen. “I saw a theatre that they designed in Holland, contacted them and then went to see it. Now they are designing our theatre.”

Photography is by Laurian Ghinitoiu.