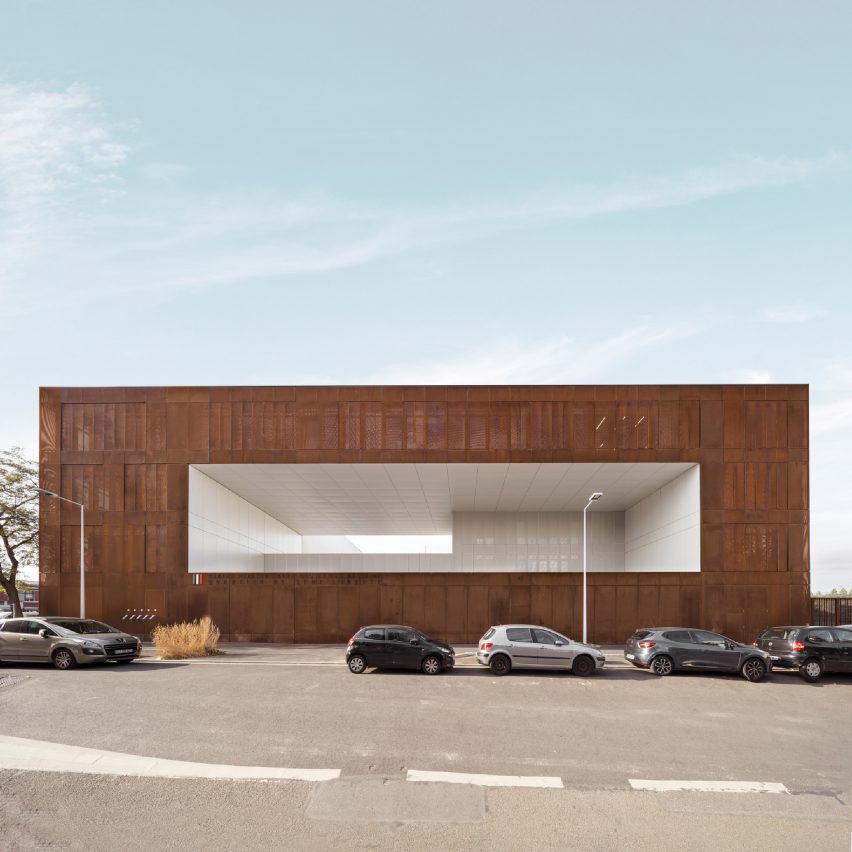 Local Architecture Network has built a minimum security prison with a perforated metal facade of weathering steel in Nanterre that has a sports court in pastel hues.

The minimum security prison is also the headquarters of the Penitentiary Services for Integration and Probation (SPIP) – which monitors those under arrest. 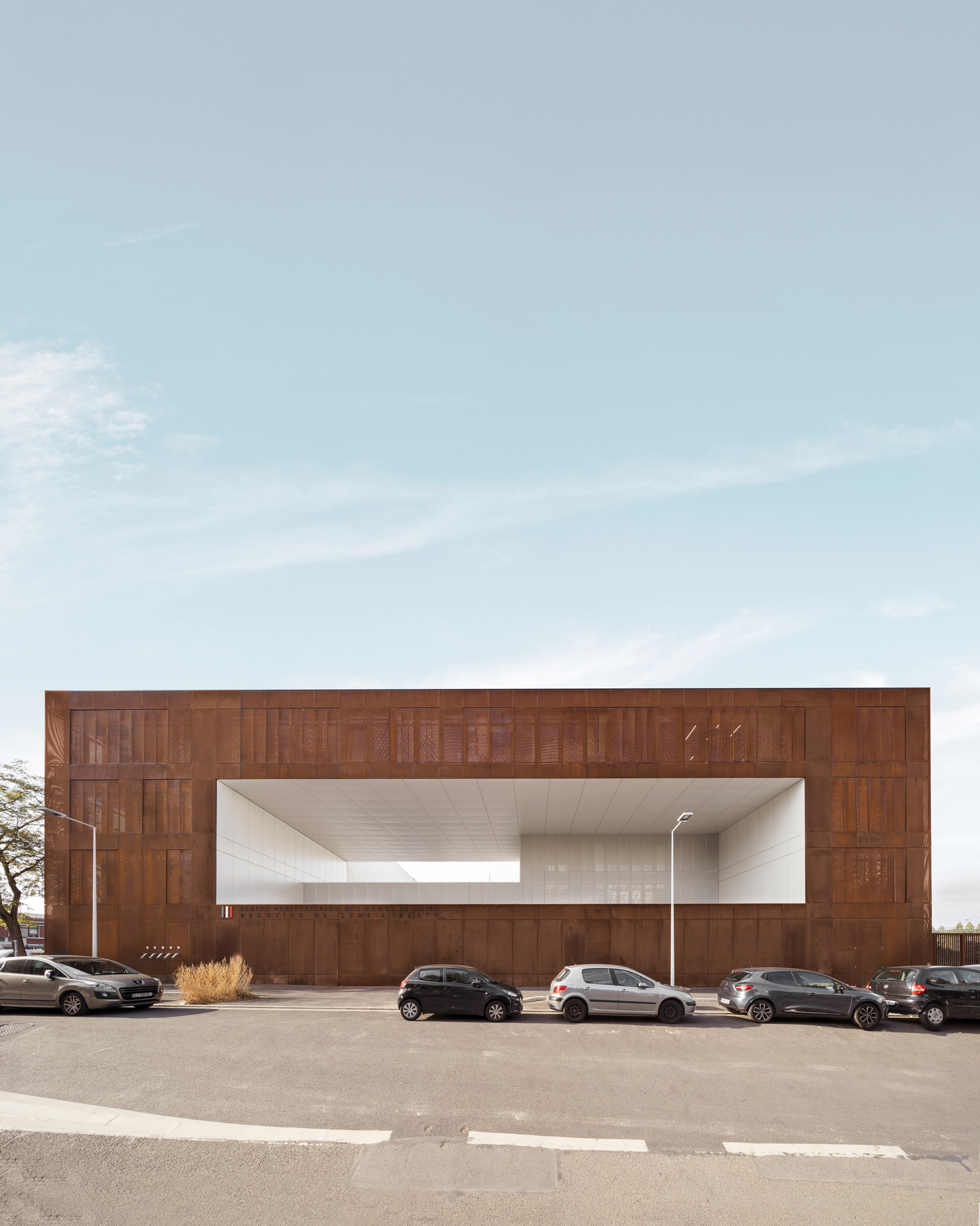 The prison’s exterior, has a large opening cut-out for the entrance, instead of the traditional solid boundary wall that would usually enclose an inner-city prison. 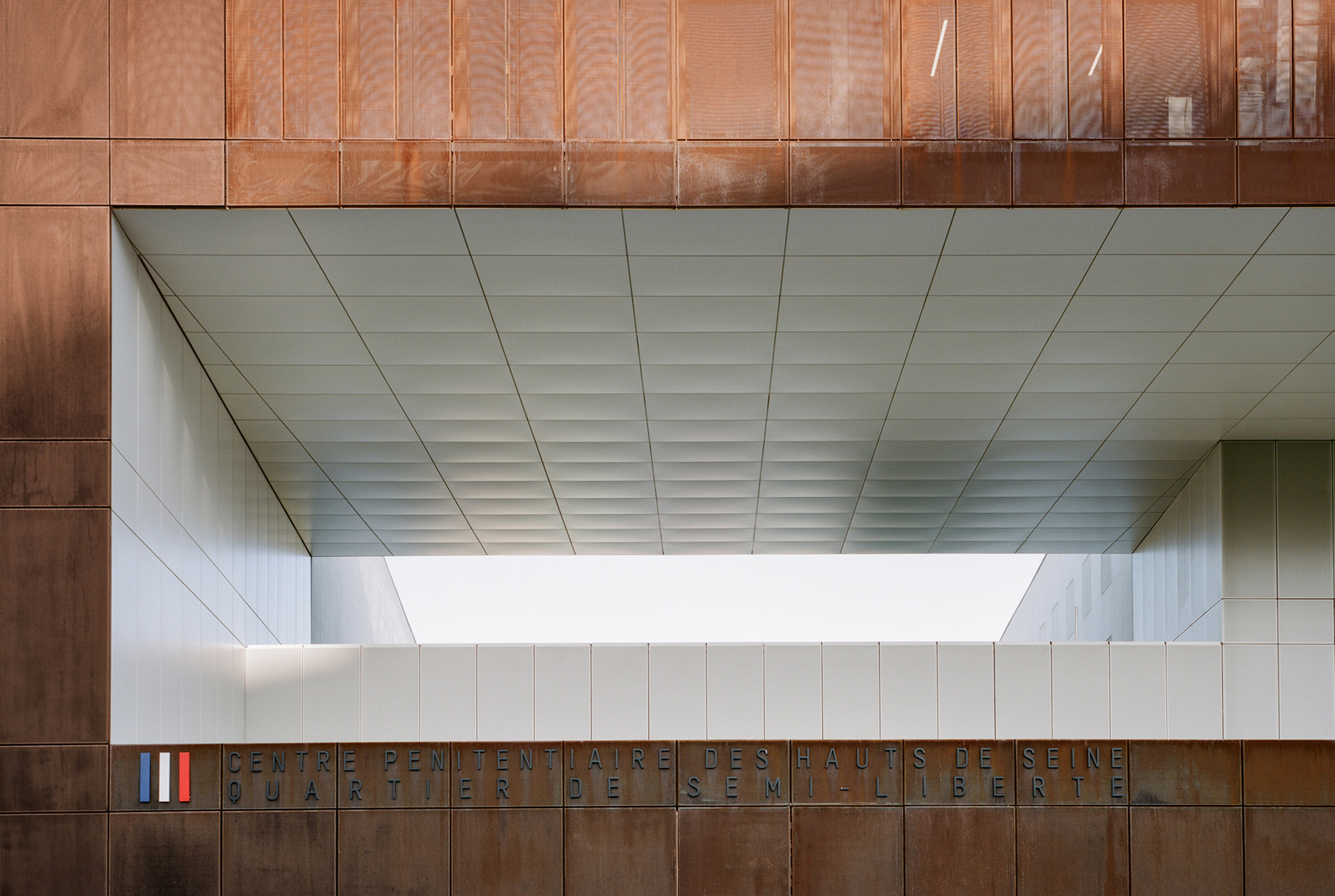 “Over time, prisons have become ‘non-urban’ objects, or objects ‘outside the urban sphere’, even when they are built in city centres,” said the practice .

“Often encased by a protective wall enclosing one or more buildings within, penitentiary architecture has reduced the field of action to addressing the boundary between the inside and the outside, as well as to the question of control and surveillance.”

To allow a more direct connection to the surroundings, the L-shaped SPIP block faces out to the street.

It sits atop the larger prison block to form a cube, where entry is managed via a protected entry post (PEP) with a view into the internal courtyard. While largely windowless, the weathered steel elevations include shutters that open and close automatically to regulate the level of sunlight that enters into the interior spaces.

The 89 cells of the minimum security prison have been placed alongside wide walkways.

Cells look out either to the central courtyard or to a small strip of planted space, including a vegetable garden managed by prisoners.

Robust and waterproof materials such as thermo-lacquered aluminium , which is self cleaning, and plaster have been used to line the internal spaces, as well as the large cut-out section in the street-facing facade. LAN was founded in 2002 by Benoit Jallon and Umberto Napolitano.

The practice is currently working on the redevelopment of the Grand Palais in Paris as well as what will be one of France’s tallest wooden buildings .

French architecture office Combas has also recently attempted to construct an alternative to oppressive prison architecture at a detention centre for minors in Marseille .

Photography is by Cyrille Weiner unless stated otherwise.

Watch The World Around architecture conference in New York

This week sofas and young designers were showcased at Maison&Objet

10 steamy saunas to sweat it out in colder climes