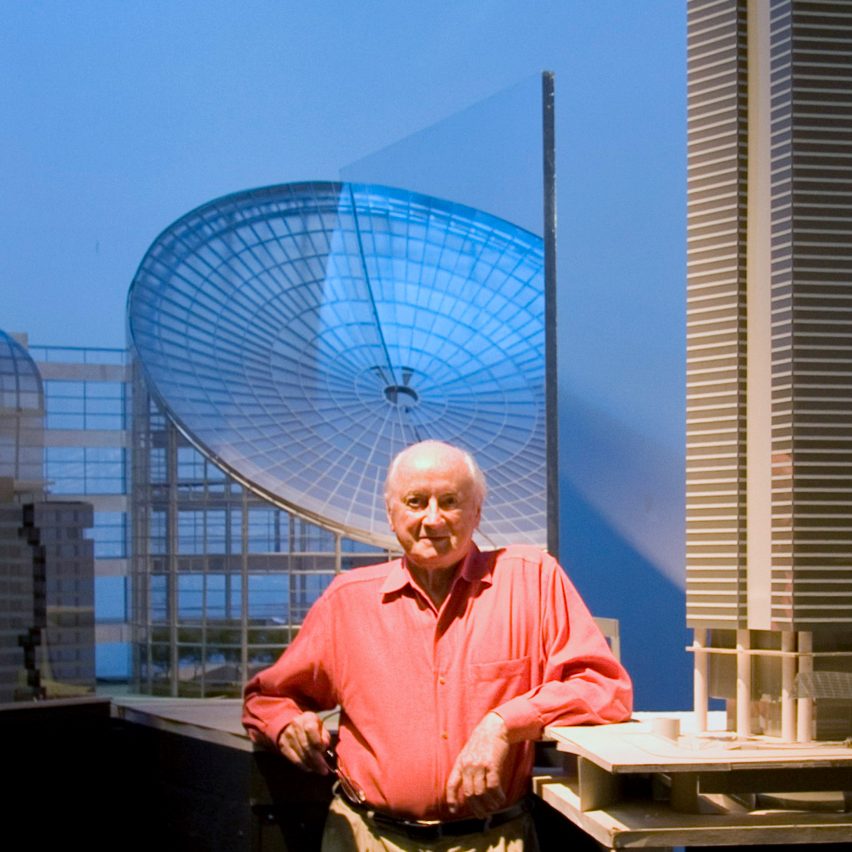 Pritzker Prize-winning architect and Eero Saarinen protégé Kevin Roche has passed away aged 96, leaving behind a “formidable body of work” including New York’s Metropolitan Museum of Art and The Ford Foundation headquarters.

The Dublin-born modernist architect – one of the first recipients of the Pritzker Prize – died Friday 1 March 2019 aged 96 at his home in Guilford, Connecticut.

After studying under modernist architect Mies van der Rohe at the Illinois Institute of Technology, Roche kicked off his career in postwar America at the Detroit office of neo-futurist architect Eero Saarinen.

Starting at the practice in 1950, he was promoted to principal design associate and worked closely with the Finnish-American on a number of US projects up until 1961, when Saarinen passed away. Roche was left in charge of the practice with his future partner, John Dinkeloo, and Joseph Lacy.

Roche and Dinkeloo later established Kevin Roche John Dinkeloo and Associates as a successor to Saarinen’s studio. The Connecticut firm – which landed The Oakland Museum of Art in California as its first commission – completed several major works in New York City, such as the Central Park Zoo, the 60 Wall Street skyscraper and an extension to the Jewish Museum.

Among the most well-known is its masterplan for The Met. Initiated in 1967, the project involved redesigning the museum to include the famed terraced steps and adding a series of new galleries. These include the glazed Sackler Wing for the Temple of Dendur – which provided the backdrop to a recent Chanel fashion show – the Michael C Rockefeller Wing, and the Andre Meyer Galleries above.

The additions – of which there is also the new American Wing and the Wallace Galleries for Twentieth Century Art – are celebrated for complementing the existing details of the museum’s original beaux-arts building with high spaces and plenty of glazing.

Also in New York, Roche’s firm completed The Ford Foundation in 1968. The L-shaped building wraps around large tree-filled atrium, to offer an early example of the indoor public spaces in Manhattan offices.

Roche received the Pritzker Prize in 1982 following these accomplishments, with the jury commending his “formidable body of work”.

“In this mercurial age, when our fashions swing overnight from the severe to the ornate, from contempt for the past to nostalgia for imagined times that never were,” said the jury’s citation at the time. “Kevin Roche’s formidable body of work sometimes intersects fashion, sometimes lags fashion, and more often makes fashion.”

Following his death, a number of architects and designers have paid tribute to the modernist architect, including the founder of US firm wHY Kulapat Yantrasast.

Yantrasast, who is currently working on an update to Roche’s Micheal C Rockefeller Wing at The Met, described the late architect as one his “reallifeheroes” in an Instagram post dated 29 May 2017, adding that “even with a Pritzker I still think he deserves more public recognition”.

Pentagram designer Michael Beirut also took to social media to complement Roche following his passing. He commended the architect’s presentation of the original design for The Ford Foundation as “one of the most persuasive and revolutionary things I’ve ever seen” in a tweet.

Other highlights from his career is the modernist Knights of Columbus Building in New Haven, Connecticut – which features four chunky brick columns at its corners – and the three triangular office buildings, known as The Pyramids, in Indianapolis.

“To build well is an act of peace,” says Roche

His architecture often featured a variety of different materials, like masonry, glass and Corten – its use at the Deere and Company Headquarters was one of the first architectural applications. While his approach was influenced by modernism, it is typically regarded as difficult to define. Roche, however, aimed to sum it up in his Pritzker Prize acceptance speech:

“We should, all of us, bend our will to create a civilisation in which we can live at peace with nature and each other,” he said. “To build well is an act of peace. Let us hope that it will not be in vain.”

Born 14 June 1922 in Dublin, Ireland, Roche began his architectural studies at the School of Architecture at University College Dublin in 1940. While studying, he designed the cheese warehouse and the piggeries for the Creameries in Mitchelstown – a small town in County Cork where his family lived.

After graduating, he worked for Dublin-based architect Michael Scott and then London’s Maxwell Fry, before moving to the United States in 1948 to study the postgraduate course at the Illinois Institute of Technology.

Roche continued work up until his death, with his final project, the Capitol Crossing development in Washington DC, slated for completion this year.