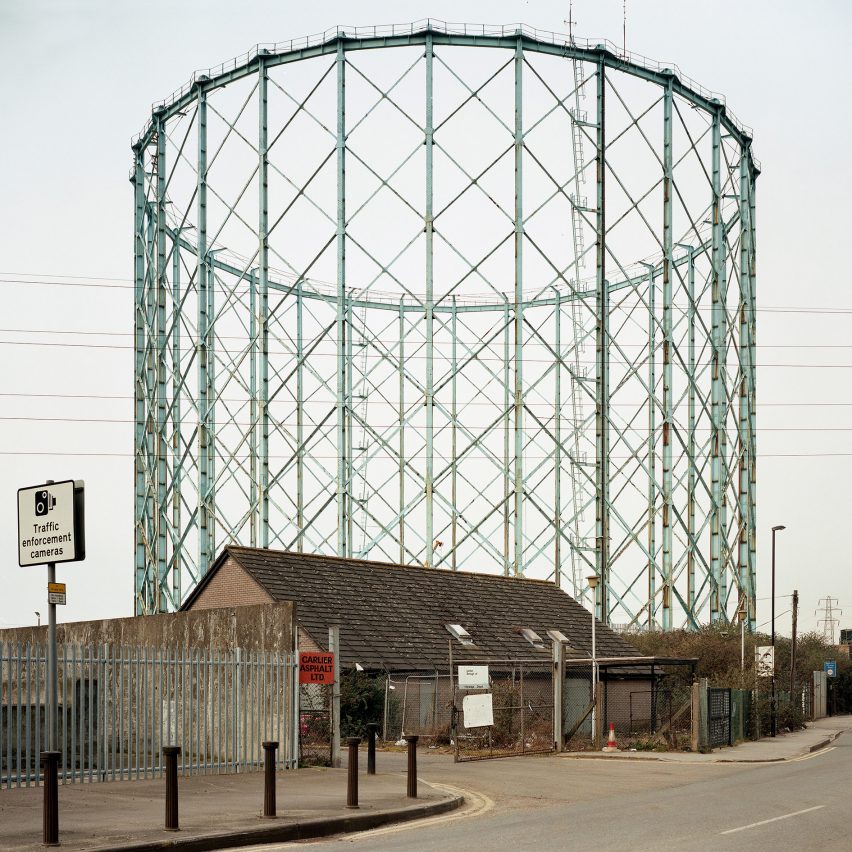 Architectural photographer Richard Chivers has captured images of gas holders from across England to create a visual record of the remaining examples of the structures.

Chivers decided to photograph the gas holders – large structures that were used to store natural gas – as many of them are under threat of demolition.

“Three or four years ago I read an article in the news that most were to be demolished so I decided I would try and capture some of them before they were lost forever,” he told Dezeen.

“Quite a few of these structures are now gone or are about to go, so the images themselves become a record of our industrial heritage and for some people a nostalgic record of a place they used to inhabit.”

In total Chivers photographed 35 of the industrial structures over a period of three years, visiting cities across the country including Leeds, Manchester, Brighton and Sunderland.

The photographer also captured numerous gas holders in London including structures that have become landmarks at Battersea, Southall and Kennington.

“They have been part of the urban skyline across the UK for up to 200 years and have become distinct landmarks for people,” explained Chivers.

“The gas holder at Battersea for example, next to the power station, indicate your arrival into London on the train,” he continued.

“The gas holder in Southall had LH painted on the side to show aircraft pilots that they were near London Heathrow and another famous gas holder overlooks the Oval cricket ground.”

Chivers was drawn to the structures as his work is often focused on the UK’s industrial landscape.

“My personal work often revolves around capturing industrial aspects of the landscape and architecture so gas holders have always held a fascination for me,” he said.

“My Dad used to work on them so I think this furthered my interest.”

The gas holders all have a similar form with gas held in a domed cylinder supported by a cylindrical lattice.

However, they were constructed using a large variety of steel structures. Chivers has highlighted this with a selection of black and white images in the collection.

“There are many reasons why these structures are interesting for me, many were built in Victorian times and often have quite intricate designs that I find quite beautiful,” said Chivers.

“The most interesting gas holders for me are the steel-framed structures, each having their own slightly different design which when photographed in a certain way look visually beautiful,” he continued.

“The work is mainly shot on a 5×4 film camera, which with its bellows and look reflects the technology of the Victorian era.”

Gas holders that were once a common sight in many cities. As larger gas works and pipeline technology was developed in the second half of the 20th century, the structures largely became redundant.

The majority of gas holders were decommissioned, with many subsequently demolished, and others repurposed.

In 2017, RIBA and British gas and electricity network National Grid ran an ideas competition to develop proposals to regenerate sites containing gas holders across the UK . The contest was won by London studio Outpost .