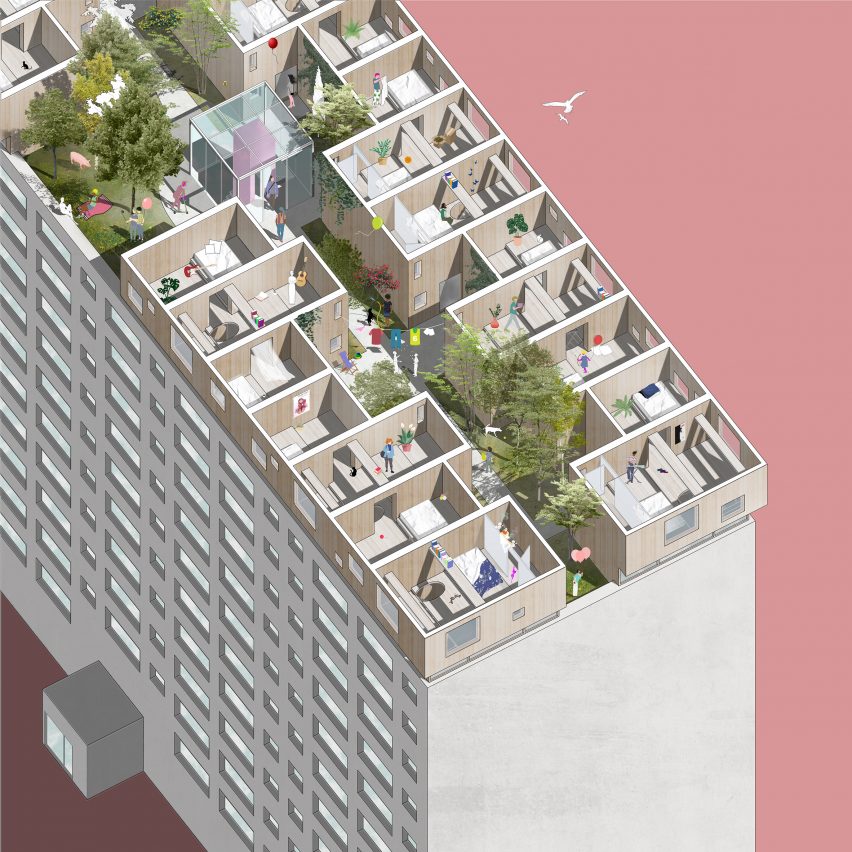 In our latest Dezeen x MINI Living video, we explore a proposal by Danish architect Sigurd Larsen to house Berlin’s growing population on the roof of an existing apartment building.

Larsen’s proposal would add dwellings set amongst a tree-lined linear park to the roof of a 270-metre-long apartment building located between the neighbourhoods of Kreuzberg and Mitte. It was first exhibited at last year’s Venice Biennale.

The new homes would be assembled using a modular system, centred on a basic wooden unit that can house single occupants or couples.

Each module would feature a large window occupying the outward-facing side of the home, offering views of the Berlin skyline.

Further plug-in modules could then be added to the unit to add up to two more bedrooms.

Larsen claims that this will encourage social diversity amongst the rooftop’s residents, as units can be optimised for families with children or groups of students.

The areas between the homes on the roof would be occupied by public lawns in which communal activities could take place.

By offering current residents of the building access to the shared facilities on the roof, the plan would offer benefits to current inhabitants as well as new arrivals, promoting social cohesion.

Larsen told Dezeen that the project has two aims – to densify Berlin’s sparse housing in order to tackle its growing population, and to activate areas of the city often neglected by urban planning and improvement initiatives.

According to Larsen, the scheme could be adapted to create new homes on the roofs of different kinds of buildings, and there are plans for a prototype to be built in summer 2019.