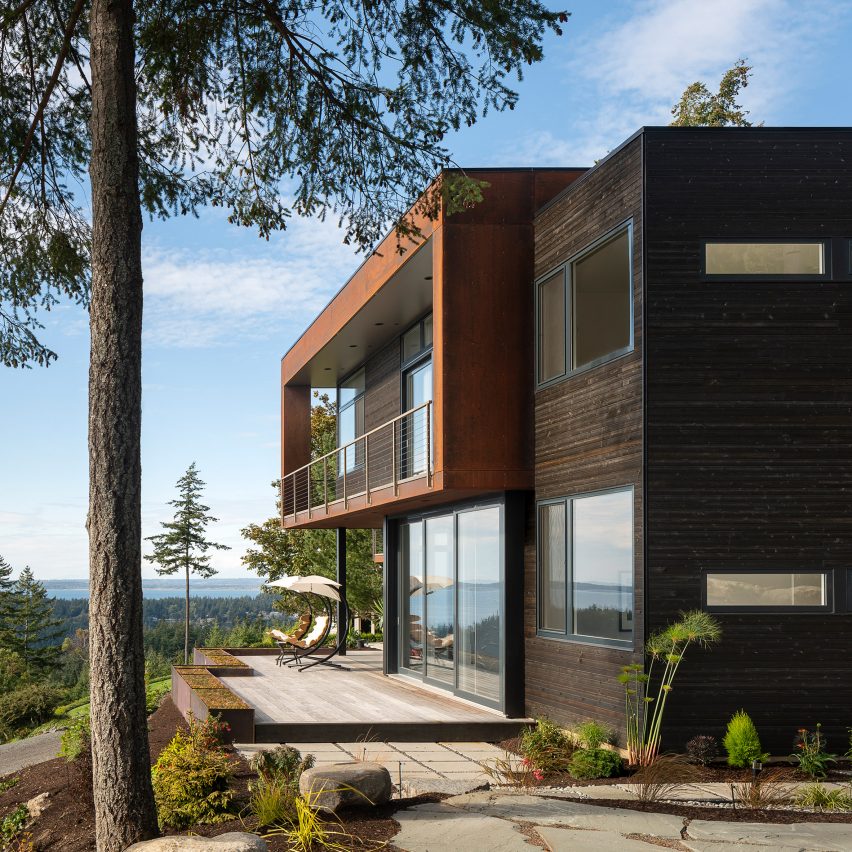 This residence in the Pacific Northwest by US firm Stephenson Design Collective features exterior walls clad in weathering steel and black-stained cedar, along with large windows that offer sweeping views of the mountains and sea. The House on the Cove is located in the coastal town of Bellingham in northern Washington. The residence consists of a main dwelling and a detached structure that houses a garage and music studio.

Together, the two rectilinear buildings form an L-shaped plan. 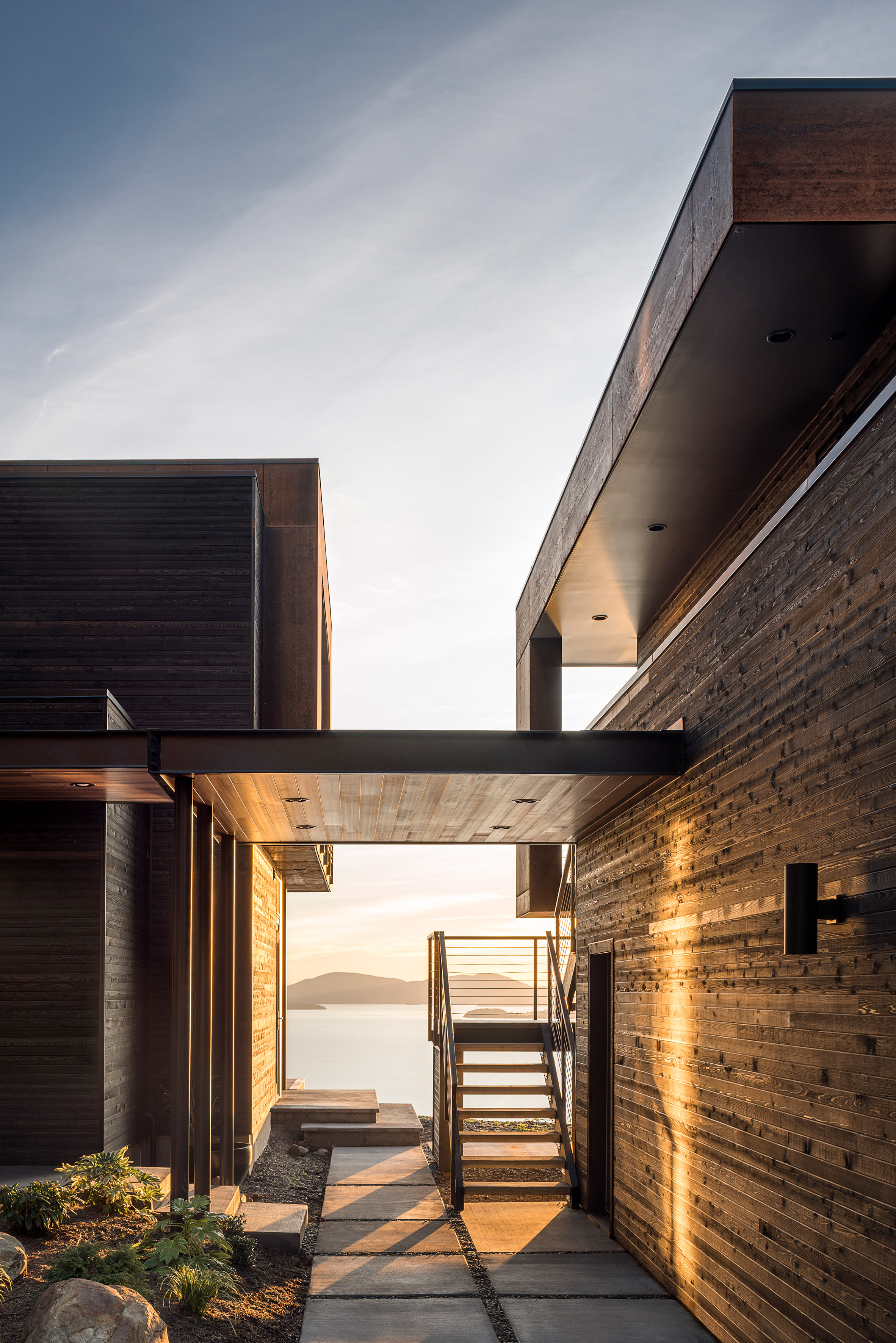 A primary goal for the design team was to respect and embrace the natural surroundings. The elevated, wooded site offers sweeping views of the Puget Sound, San Juan Islands and Olympic Mountains.

“We had to maintain this environment with minimal intrusion when adding the structure,” said Seattle-based Stephenson Design Collective in a project description. “It is hard to discount the fact that we had a great opportunity to destroy this site if we weren’t considerate and thoughtful.” 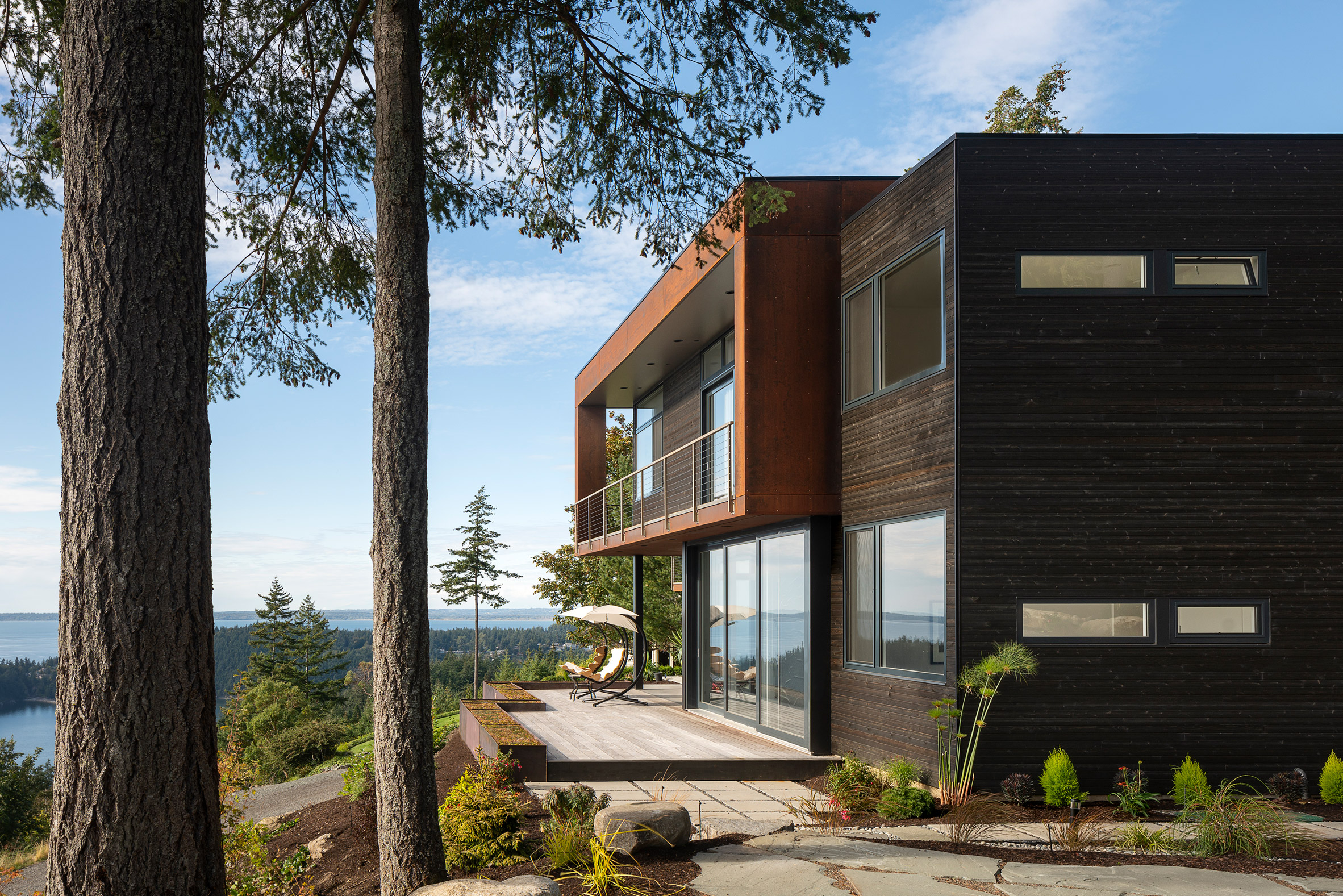 To help the home blend with its surroundings, the team wrapped exterior walls in weathering steel and black-stained cedar The house is intended to be a “shadow among the trees”.

The entry elevation is fairly opaque in order to conceal the interior and the spectacular views that lie beyond. Windows are carefully placed to bring in light and provide a connection to the neighbourhood. The home’s interior stairwell is hinted at on the street-facing facade by angled metal cladding and a trio of skylights. In contrast, the rear facade has large stretches of glass that draw in the scenery. Rooms open onto terraces that provide opportunities for taking in the ocean air.

Rising two storeys, the main dwelling encompasses 2,504 square feet (233 square metres). The ground level contains public spaces, along with a bedroom and an office. The upper level houses the master suite and a dimly lit nook for relaxing. 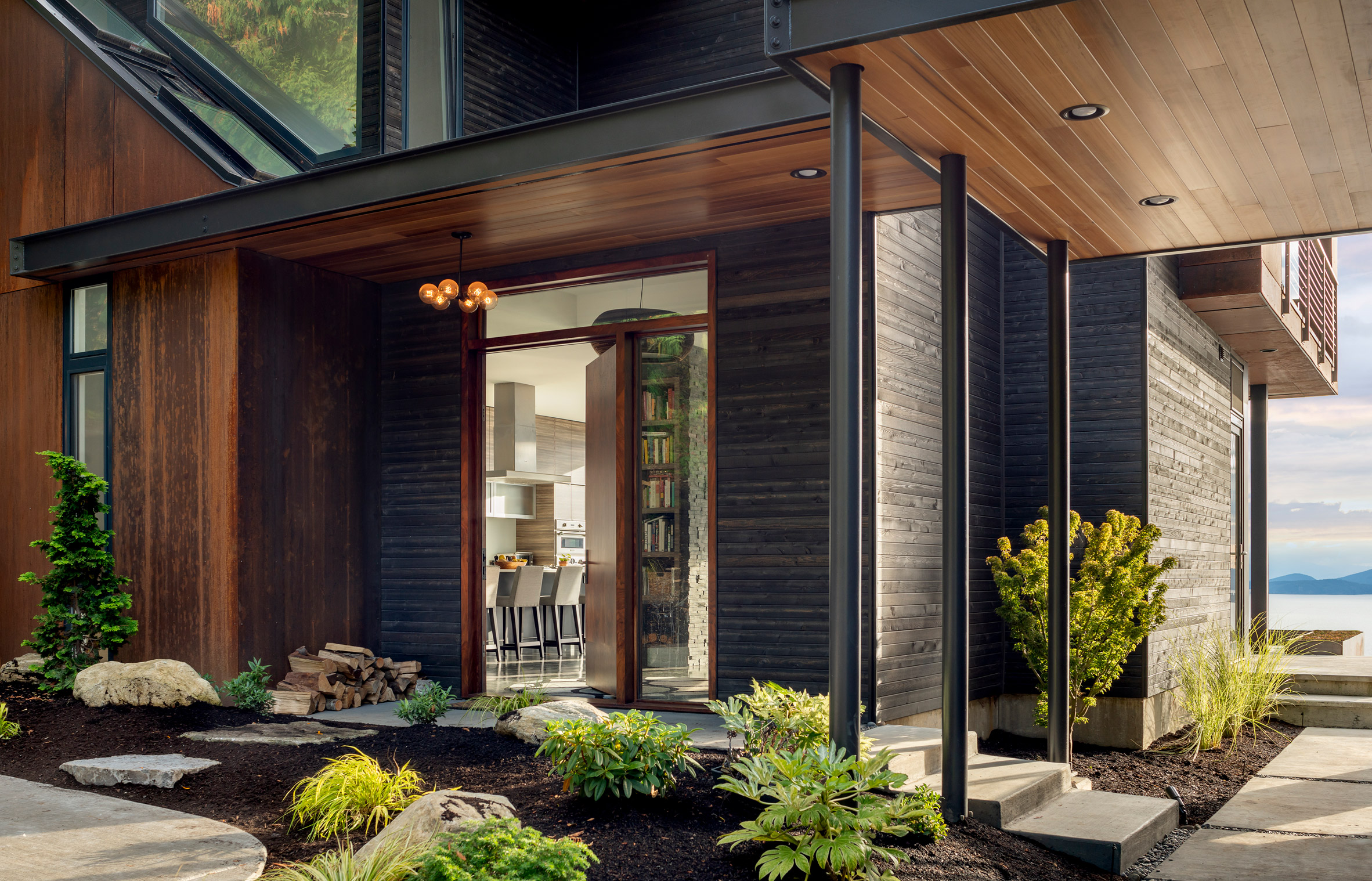 “We knew the house would be bright, so we created a ‘nest’ behind the main bedroom that could be completely closed and dark for refuge in the heat of the summer,” the team said.

A neutral colour palette was employed throughout the dwelling. Finishes include wood and concrete flooring and walls clad in stone. Textured rugs, wooden tables and fluffy pillows help create a cosy atmosphere. 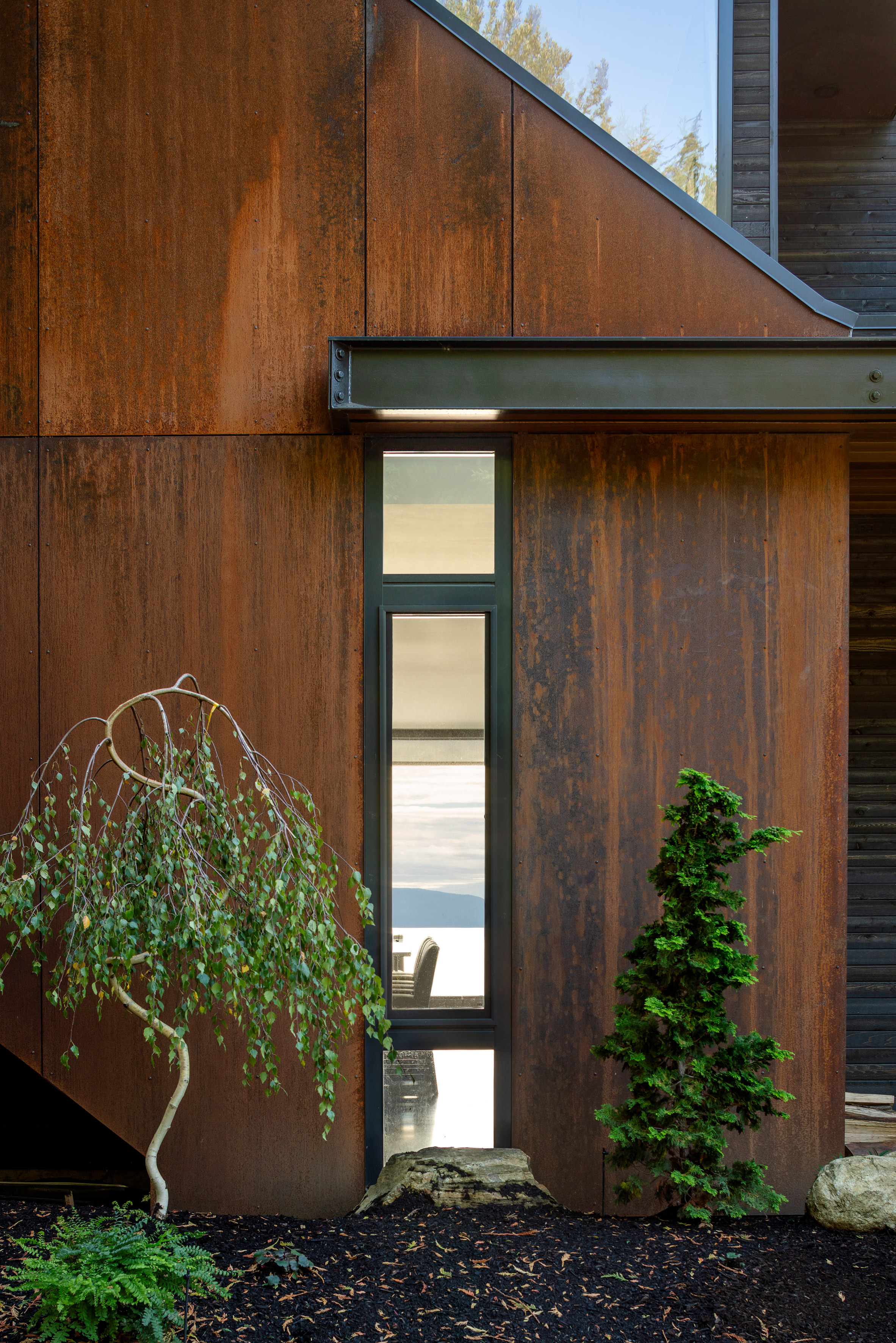 To the north of the home is the separate two-storey structure. The upper level of the 765-square-foot (71-square-metre) building houses the music studio, which can also be used as guest quarters.

The lower level contains the garage and a small workshop for metal fabrication. The client is a blacksmith by trade, and the shop acts as “his escape to create without demand”. The architects note that their initial site meeting with the client entailed “drinks, dogs and music”. The meeting began in the afternoon and stretched well into the evening.

“The client requested that we watch the movie Minka and listen to Marc Cohen’s Olanna before beginning the process,” the studio said. “He needed his home to spark the same emotions that these pieces inspire.” 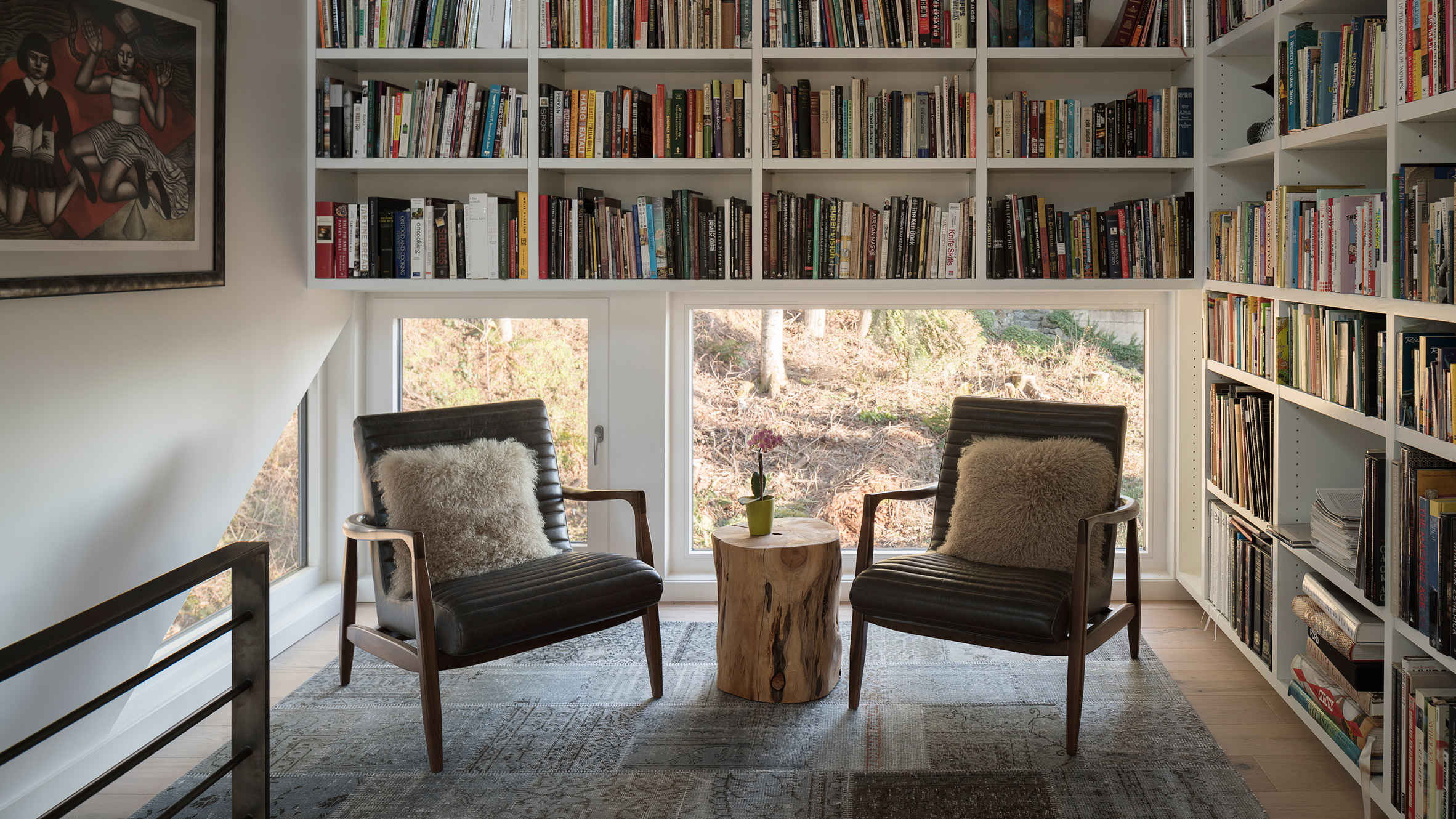 The client had no set expectations regarding the home’s size. His focus was more on the experiential qualities.

“We continued the design process as a discussion of experience and interaction,” the architects said. “We never established a ‘goal’ square footage or size, only what needed to happen within the home and how it would take place.” 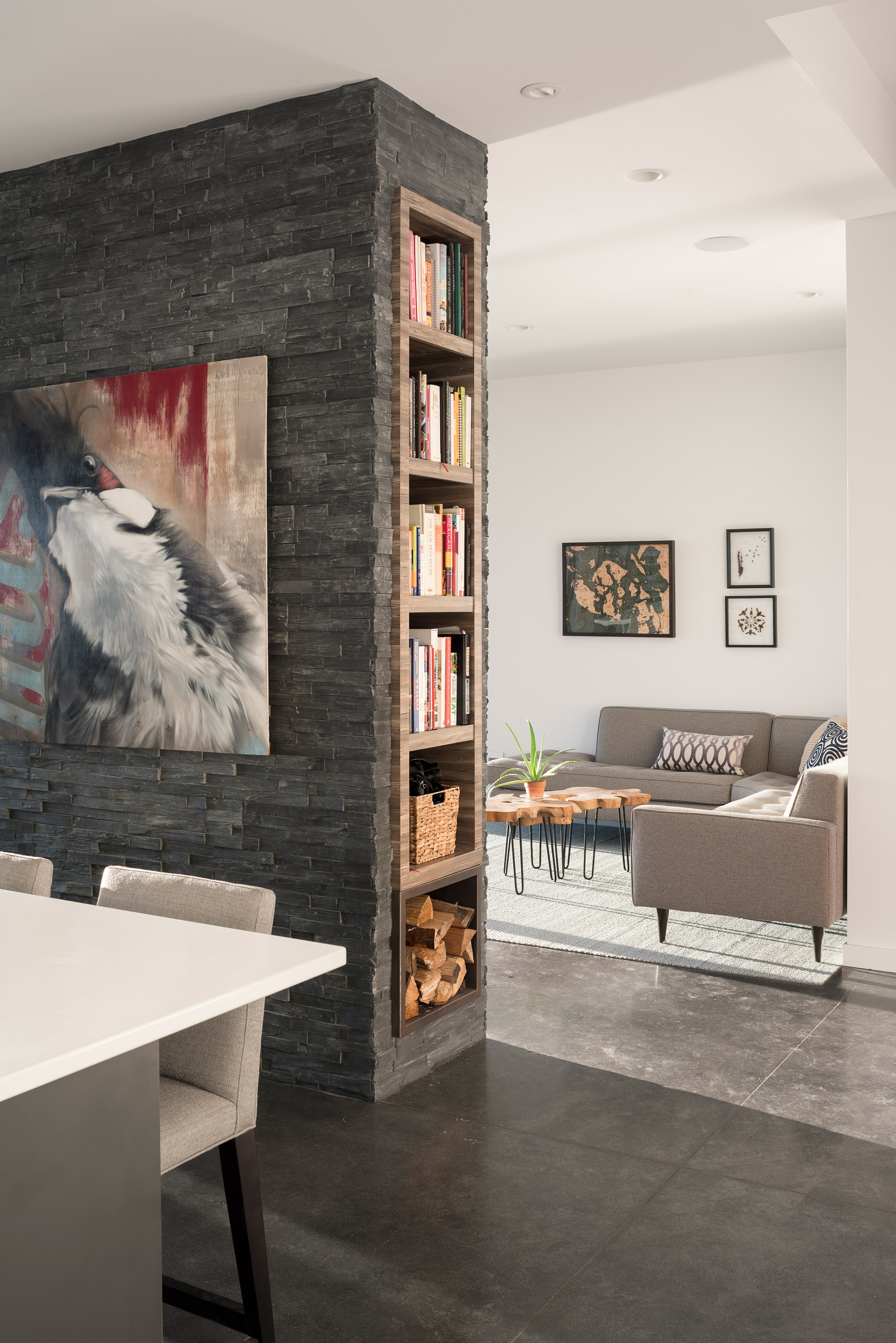 Sustainability was an important concern for the clients. In turn, the team incorporated a range of eco-friendly features including radiant concrete floors and high-performance windows. In the winter, a fireplace and its pipes provide instant heat.

Washington is well-known for its lush forests, snow-capped peaks and beautiful coastline. Other homes in the state include a waterfront home by Prentiss Balance Wickline that consists of cascading boxes with green roofs, and a dwelling by David Coleman that cuts into a hillside “like a rusty blade”.

Photography is by Andrew Pogue.

The post Stephenson Design Collective designs House on the Cove to blend with coastal Washington setting appeared first on Dezeen.