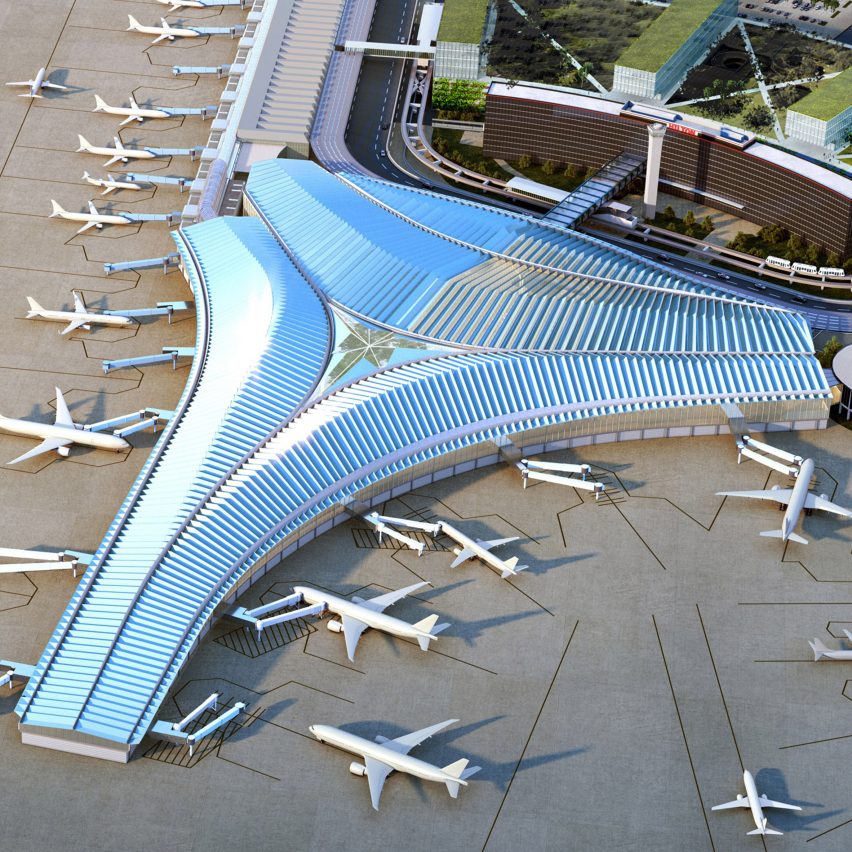 A team led by Studio Gang founder Jeanne Gang has been named the winner of the bid for the concourse and terminal at Chicago O’Hare airport, beating competition from SOM, Foster + Partners and Santiago Calatrava.

The team were awarded the project ahead of a number of major firms that shortlist the for O’Hare Global Terminal and Global Concourse in January 2019.

“The tripartite design merges terminal and concourse into a single building,” said Studio ORD, adding that the pronged shaped is intended a reference to the city’s unique position along Lake Michigan and the Chicago River.

“Every aspect of the design is focused on creating a uniquely Chicago experience,” said Jeanne Gang.

“Like the confluence of the Chicago River, the design’s converging three branches create a central hub that establishes a vibrant new neighbourhood in the heart of O’Hare’s campus,” Studio ORD added.

The pronged layout was also chosen to increase efficiency, wayfinding and connectivity inside the terminal building. Y-shaped columns would support a dynamic roofline, and are to be spaced over 100 feet (30 metres) apart.

The ribbed and fin-like roof is expected to be constructed from thousands of panels and skylights. A series of white ridges would also run along the roofline are evocative of rolling terrain.

Other key features include an oculus located in the centre. It would be defined by ample glazing above and the exposed ribbed roof clad in a wood for a warm tone. Pleats surrounding are arranged to maximize natural daylight and energy efficiency inside the structure.

At the core of the building, a circle skylight has a six-pointed glass design – a geometric arrangement that references the Chicago flag. Above, on the top floor, is a mezzanine for ticketing and security.

“Culminating in a dramatic overlook, the mezzanine offers expansive views of the airfield beyond and of the neighborhood and gates below, helping passengers orient themselves and heightening the excitement of travel,” said the studio.

A combination of escalators and glazed elevator shafts provide connections between the two floors of the building.

Numerous trees and plants in the atrium-like space, and outdoor seating also features in the design.

The team’s scheme was selected above four other designs for a proposed “global terminal” at the city’s largest airport. Each was created by either a single studio or team of several firms, as follows: Fentress-EXP-Brook-Garza Joint Venture Partners; Foster Epstein Moreno Joint Venture Partners; Santiago Calatrava; Skidmore, Owings & Merrill (SOM).

It is part of a part of an $8.5 billion expansion to redevelop the existing Terminal 2 into a new facility that will integrate international and domestic operations, titled O’Hare 21.

The city also intends to select a team to design two new satellite concourses for Chicago O’Hare as well.

Several other airports in America are similarly undergoing dramatic transformations. Newark airport in New Jersey is set for a new $1.4 billion terminal by Grimshaw, while New York’s LaGuardia is currently being rebuilt.