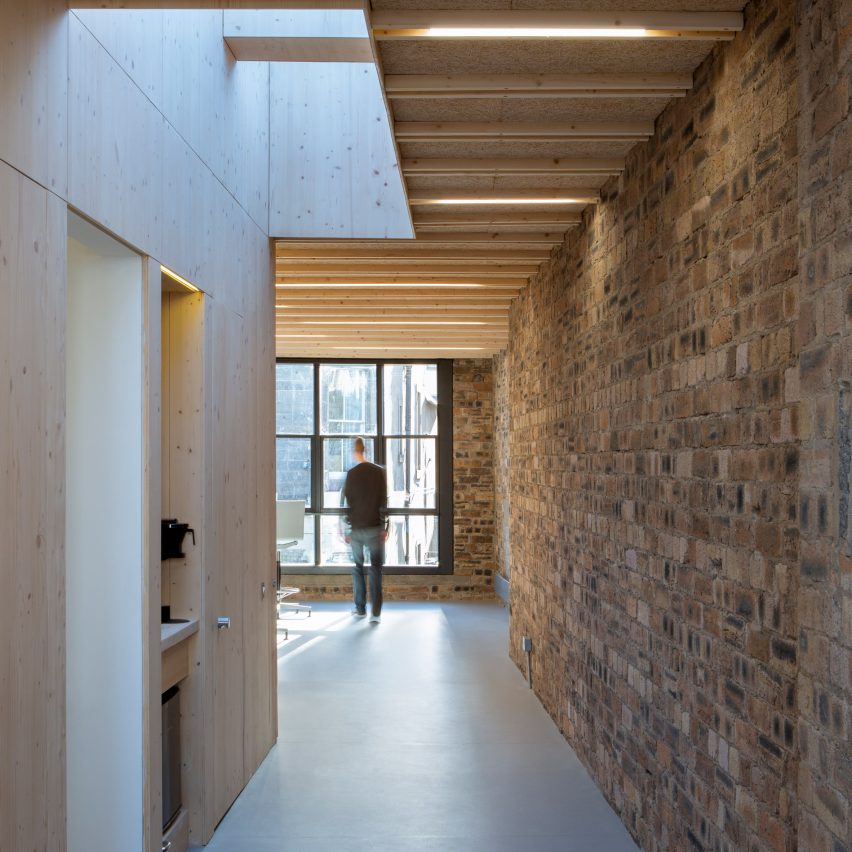 Sutherland & Co has transformed a skinny post war building in North Berwick, Scotland, into its own studio with sliding spruce panels lit by a rooflight.

The studio is located on a tight plot of land squeezed between two shops on North Berwick High Street. It sits on what was once a narrow lane – known as a wynd – that ran from the town’s High Street down to its West Bay.

As a result the building has a very narrow but deep plan. It measures little more than 3.5 metres wide, while extending to a depth of 45 metres. 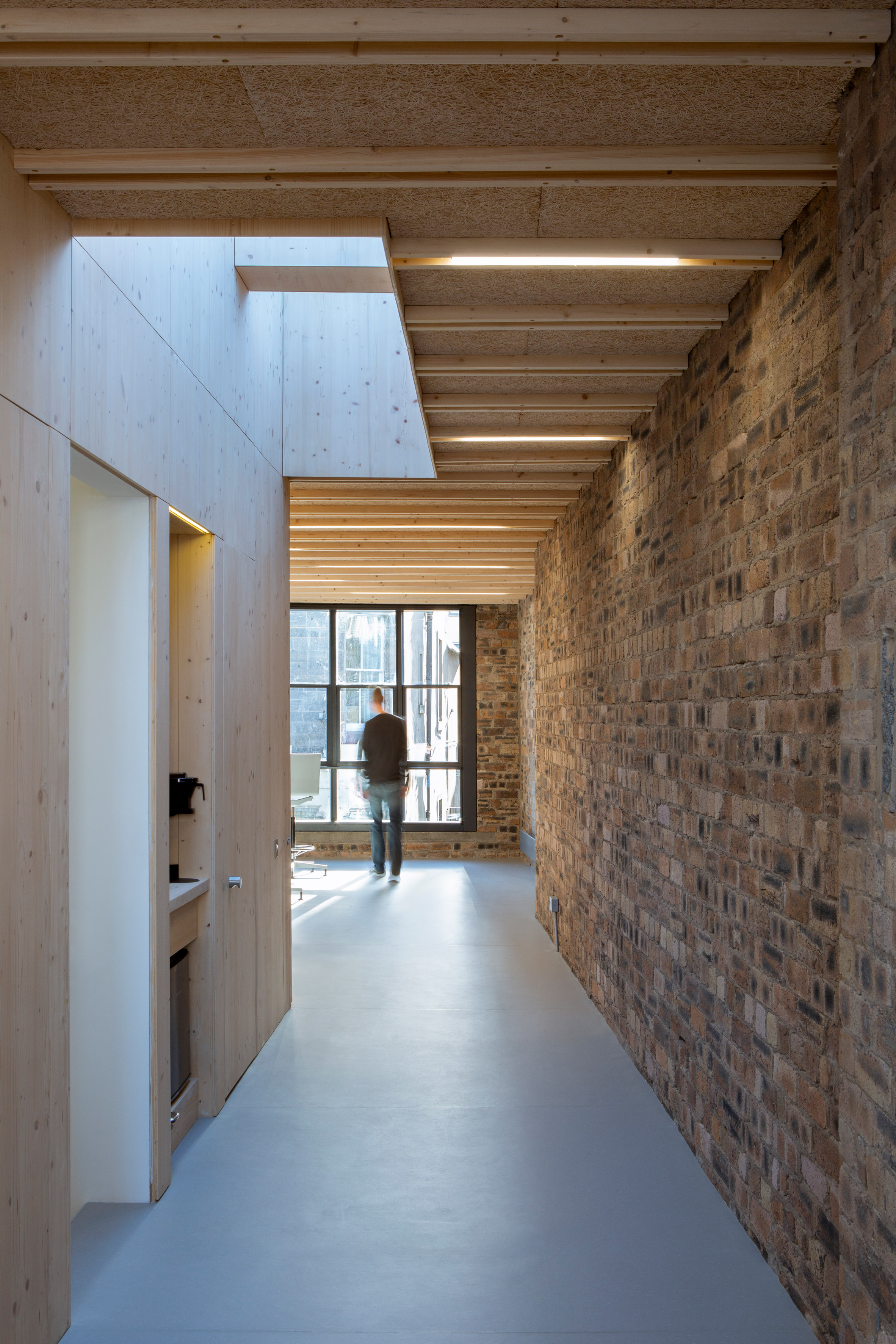 Designed by Sutherland & Co to be used as its own studio, the office is located on the first floor of the building. Desk space is located at the front overlooking the street, with a meeting room at the back.

It sits above a ground floor retail space that sells Nordic-inspired goods. 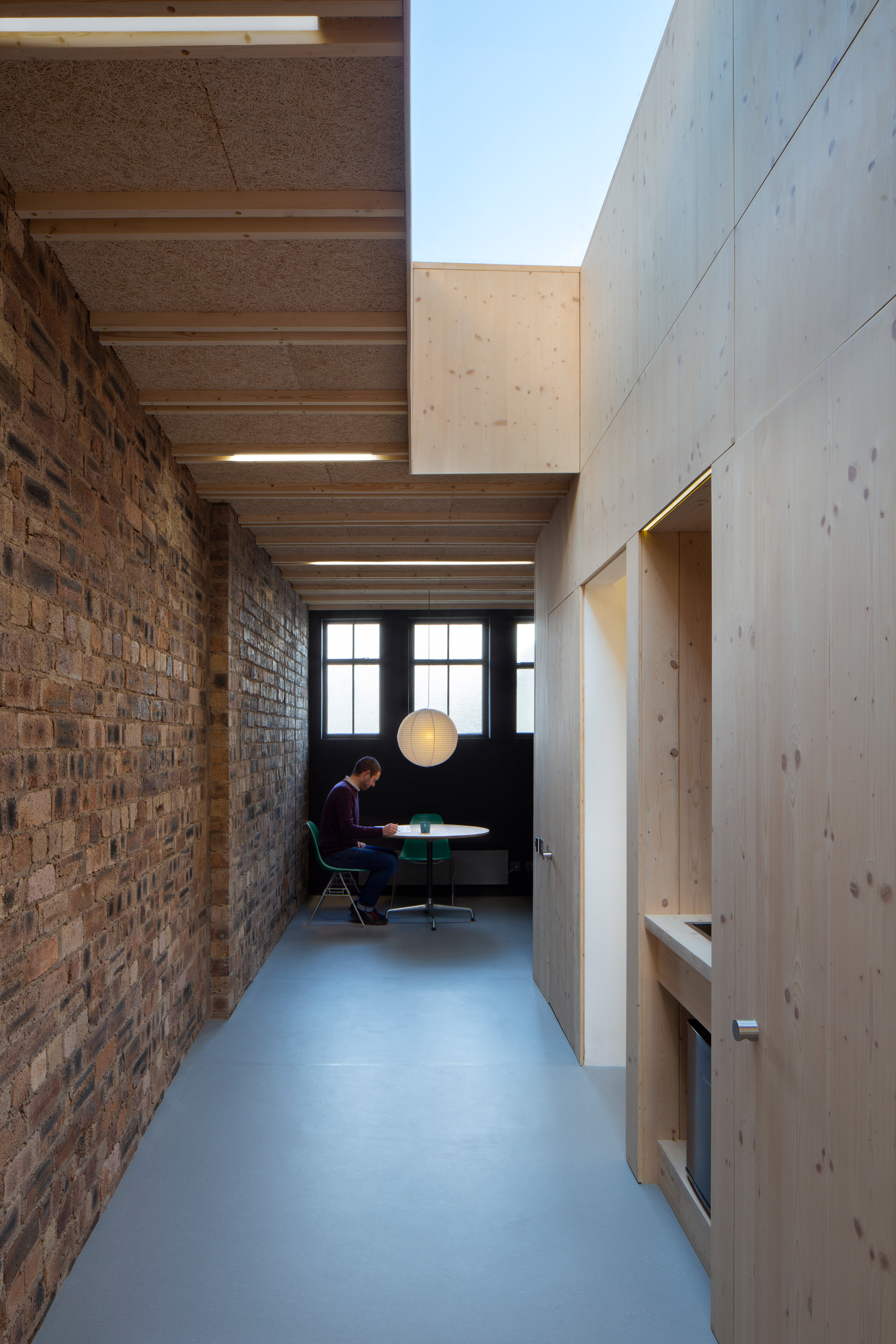 Sutherland & Co explained that after being gutted by a fire in the 1960s, the building had undergone incremental adhoc alterations that left “little of value”.

For example, on the first floor the architects removed a poorly placed fire escape that had been inserted in the 1960s, but had been made redundant by the introduction of a sprinkler system. 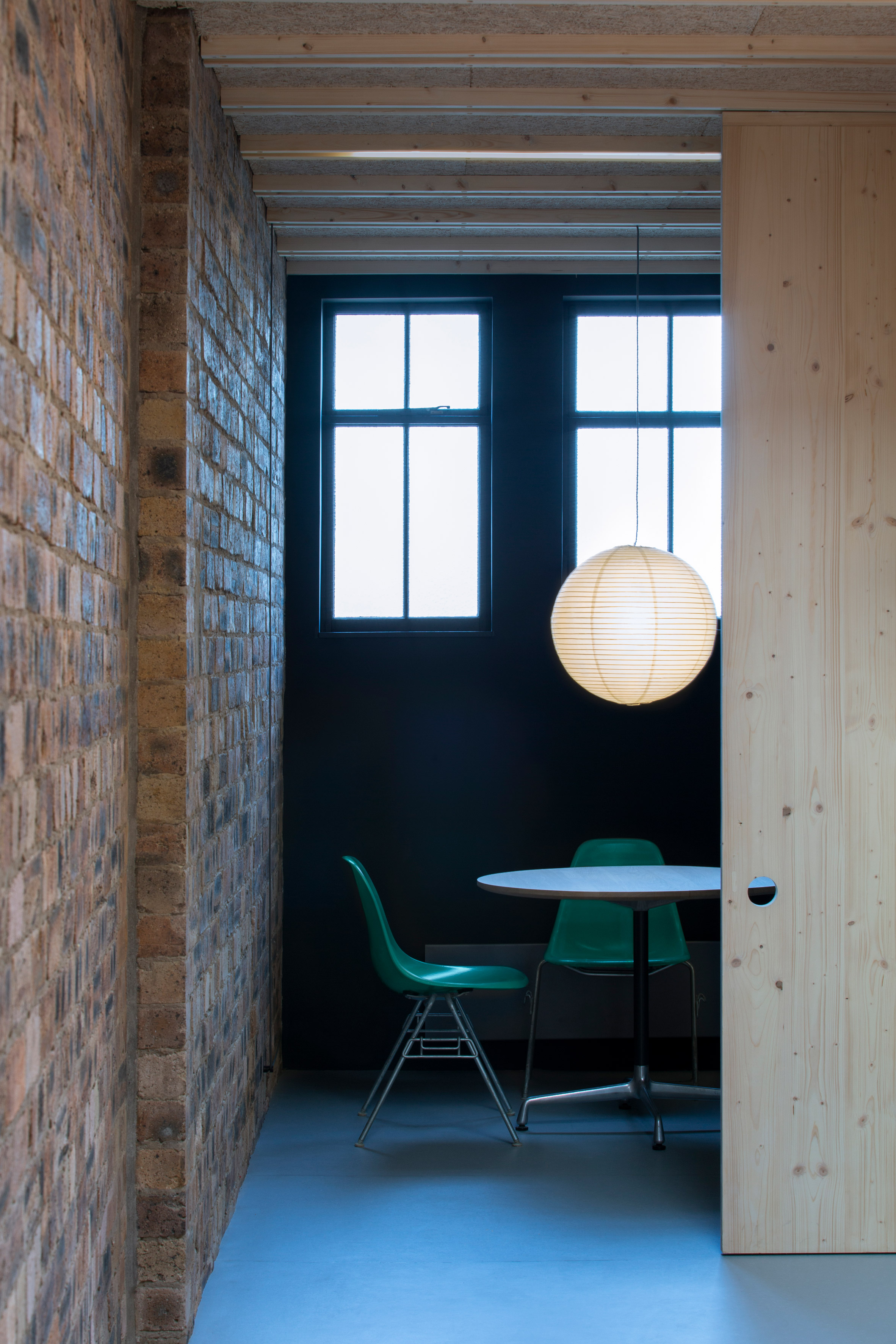 The firm said the fire escape’s removal substantially opened up the interior while freeing up the rear of the site for further development.

“The rear of the site, fronting onto Forth Street, was once occupied by a second building that was demolished in the 1960s to facilitate widening of the street,” the studio explained.

“Removal of the first floor fire escape has now opened up the rear of the site providing potential for further development, hopefully a new-build family home.” 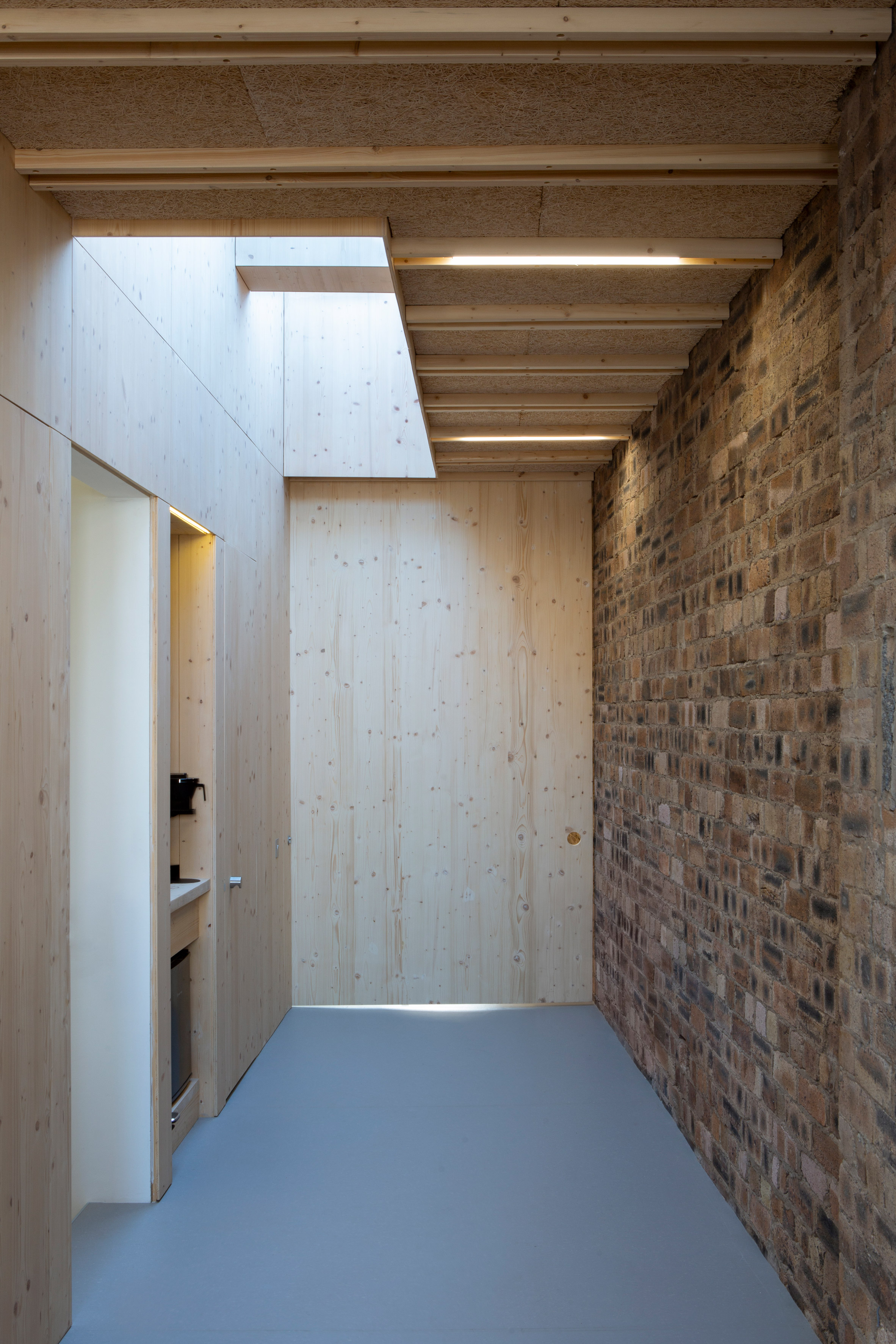 To finish the space, the architects selected a subdued palette of materials including cross-laminated spruce, wood-wool and exposed brick.

A series of oversized sliding panels made from cross-laminated spruce allow the main studio and meeting space to be closed off when needed, while a battened wood-wool ceiling is intended as a unifying element that exaggerates the depth of the interior. 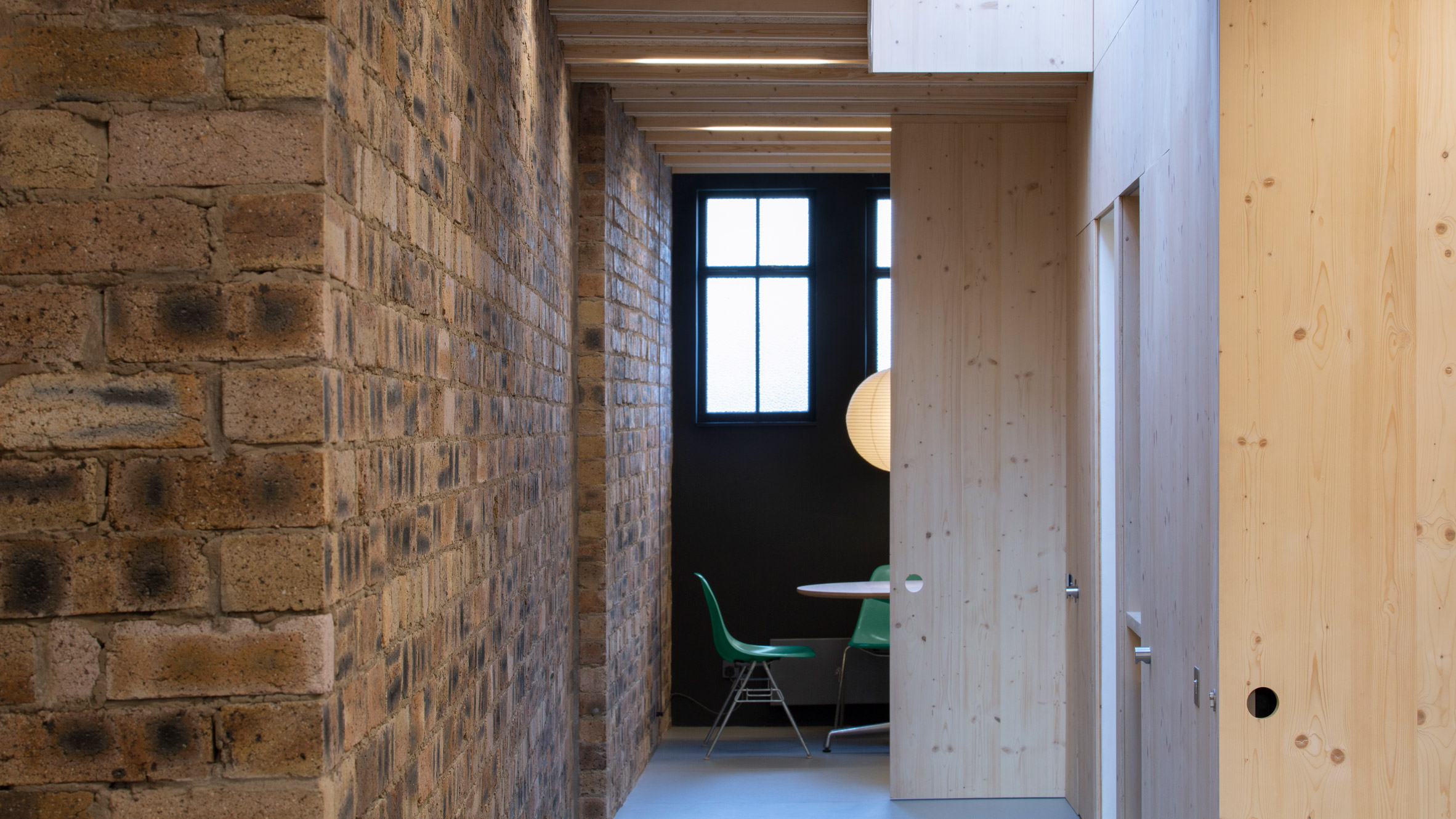 Across the ceiling, the timber battens conceal sliding door tracks and lighting, as well as mastering the ceiling panel joints. A rooflight was inserted into the centre of the narrow space to bring daylight into the heart of the deep plan.

“The redevelopment was as much an exercise in subtraction as in addition, removing accumulated layers of past development,” Sutherland & Co explained, adding that the project was effectively self-built through a parallel development company. 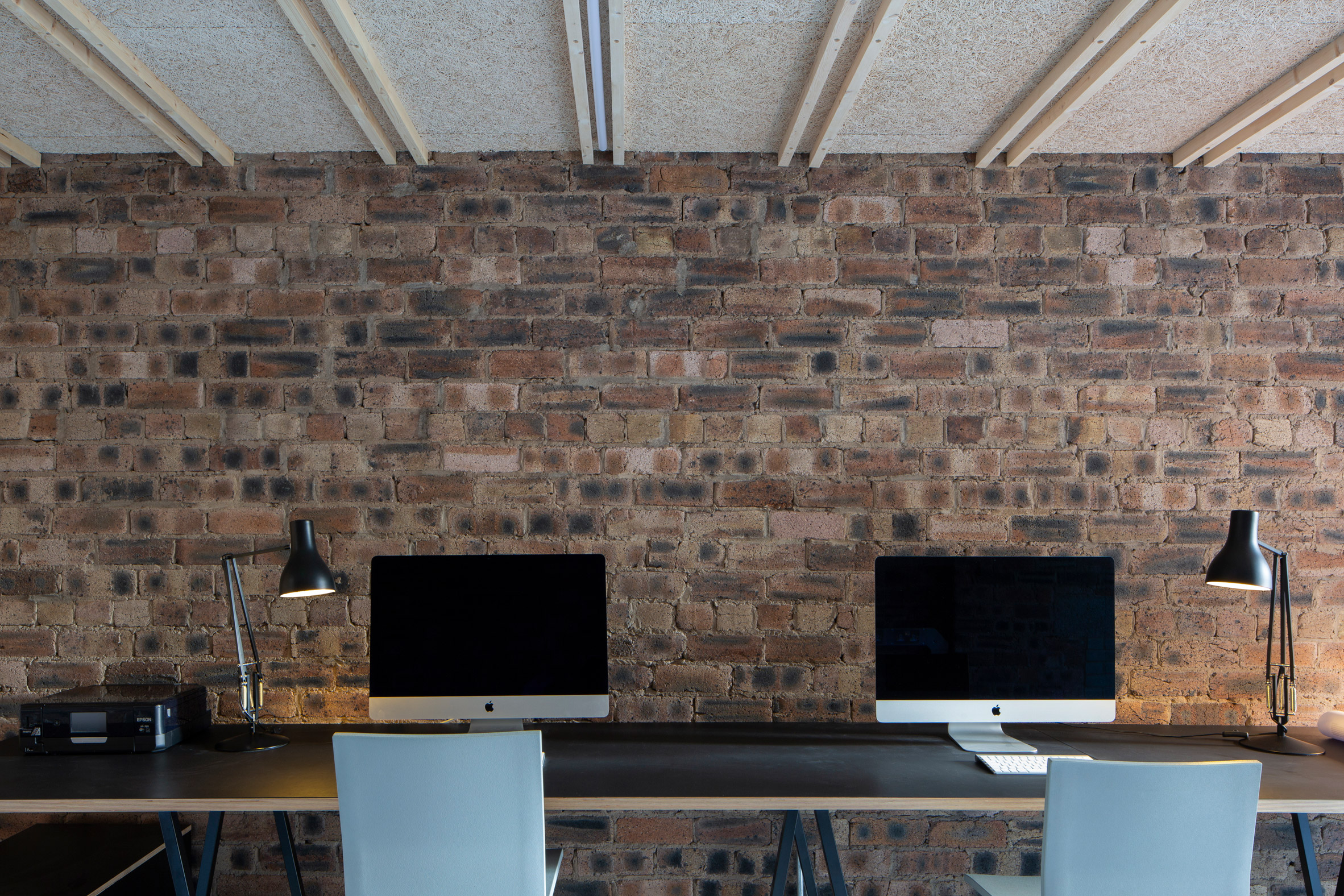 “This gave flexibility to adjust and fine tune aspects of the design while the work was underway,” said founder Robin Sutherland and fellow director Mike Roper.

“Investing our time and energy in the project also helped to get the most out of a relatively modest budget.” 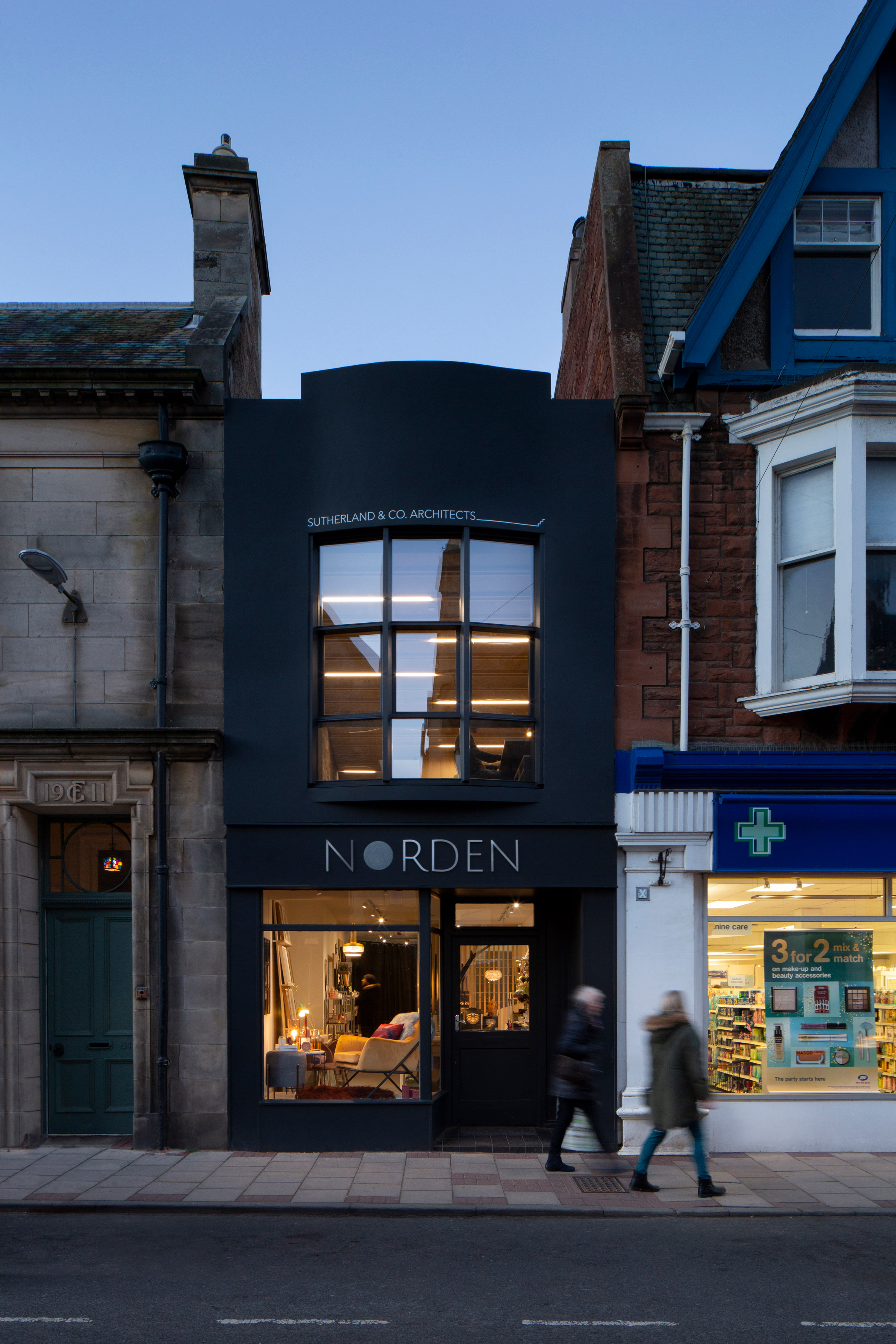 Formed in 2011 by Robin Sutherland, the firm has also completed a gabled extension to a cottage in the Scottish countryside that features shingle-covered walls and a light-filled interior.