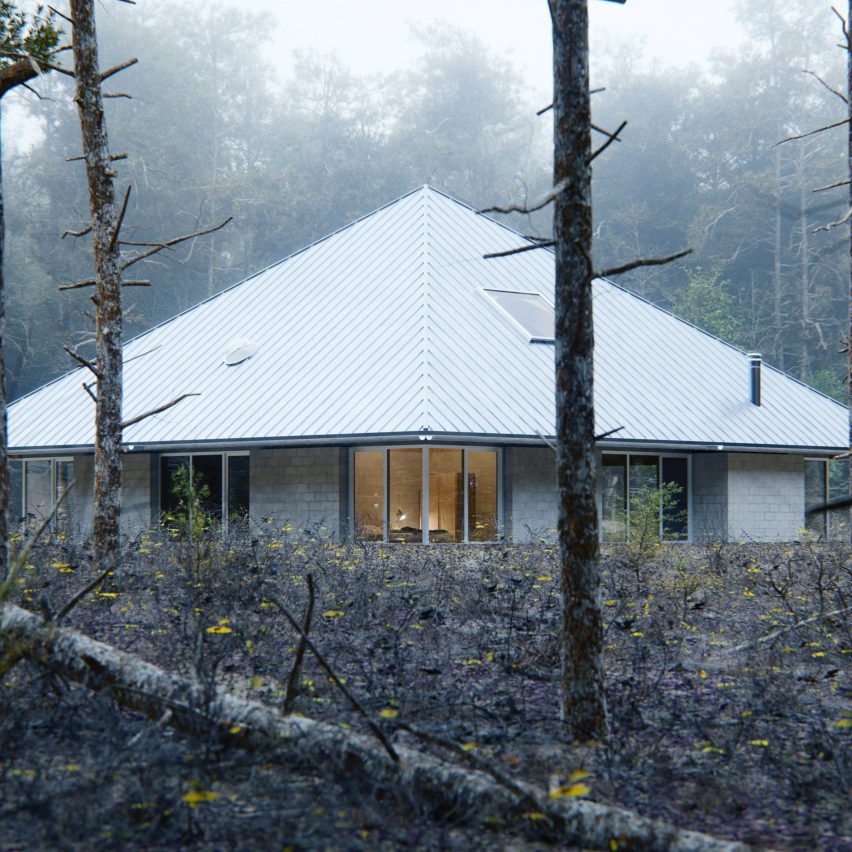 This set of highly realistic renderings unveil a cabin that American studio WOJR has designed for a forest clearing in Massachusetts, featuring a large pyramidal metal roof set on concrete block walls.

House of the Woodland is a family residence planned for a site in the Berkshires region in western Massachusetts. Envisioned as a retreat from city life, the cabin is intended to “frame the slow and deliberate rituals of respite”, according to WOJR, which is based in Cambridge, Massachusetts. 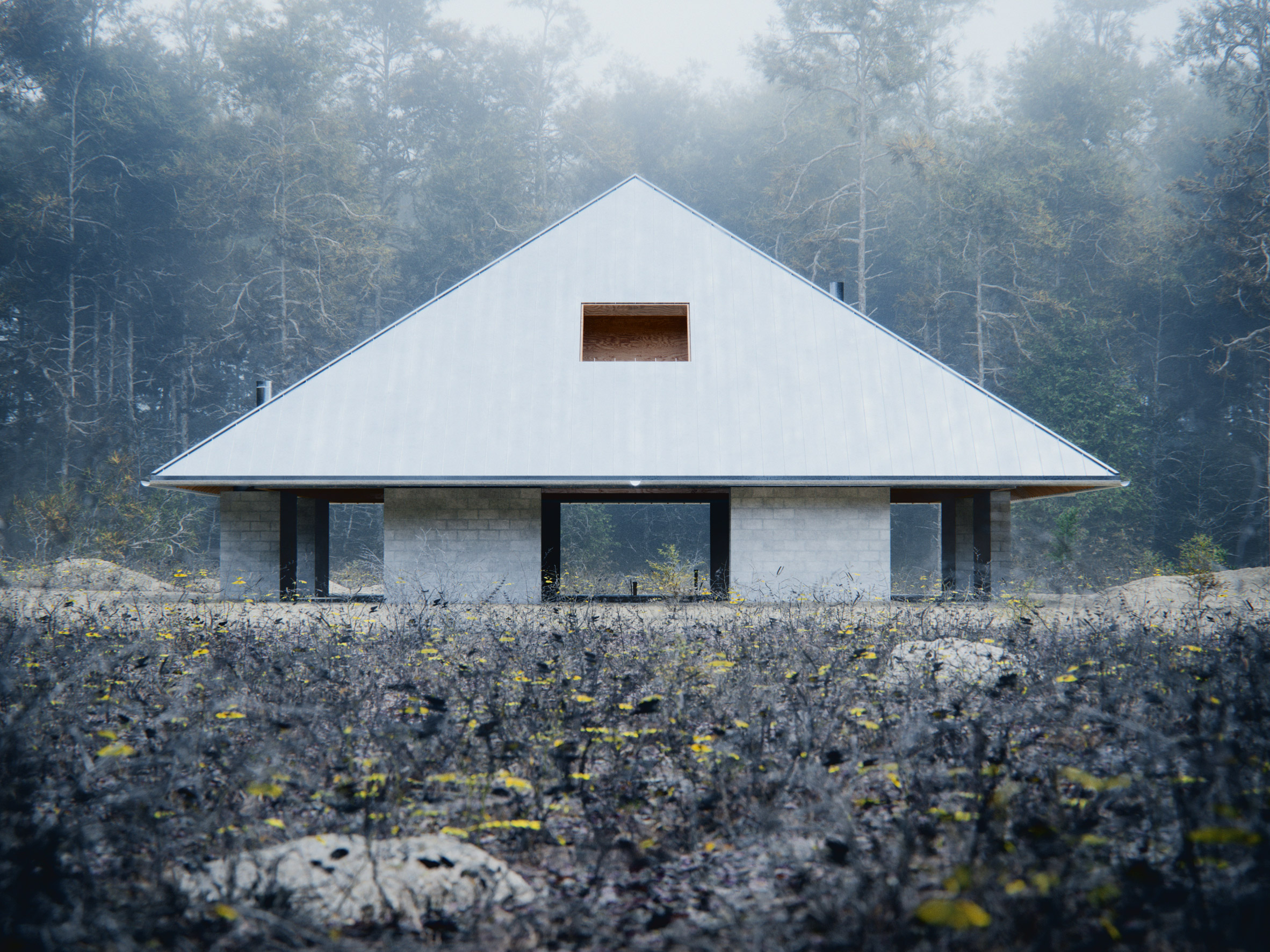 Four large, intersecting plywood trusses sit atop the solid walls. The trusses allow for column-free spaces. while also supporting the roof structure. This is clad in standing-seam metal and punctured by four circular skylights set within square frames. 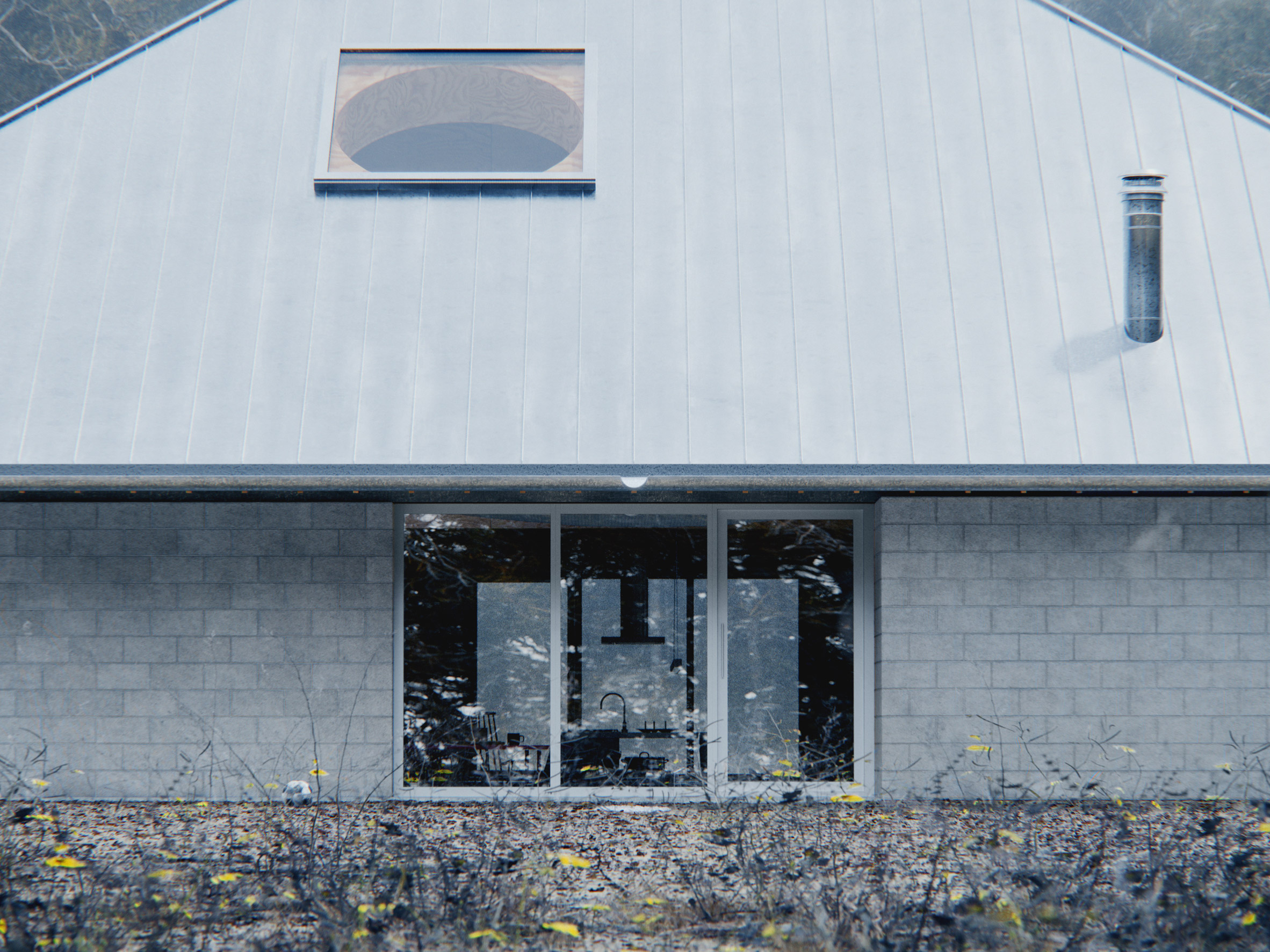 Square in plan, the home’s design was influenced by the nine-square grid that has been used by architects for centuries. Some have argued that villas by 16th-century architect Andrea Palladio make use of the nine-square organisational device.

The plan was lated employed by Louis Kahn for Exteter Library, built in 1972, and by Shigeru Ban for his Nine Square Grid House, completed in 1997.

Perhaps most notably, American architect and professor John Hejduk developed a teaching approach in the 1950s known as the Nine Square Grid Problem.

To get his students thinking about architectural space, Hejduk required them to design a house using a nine-square grid. An exhibition about Hejduk’s approach was staged at Harvard University in 2016. 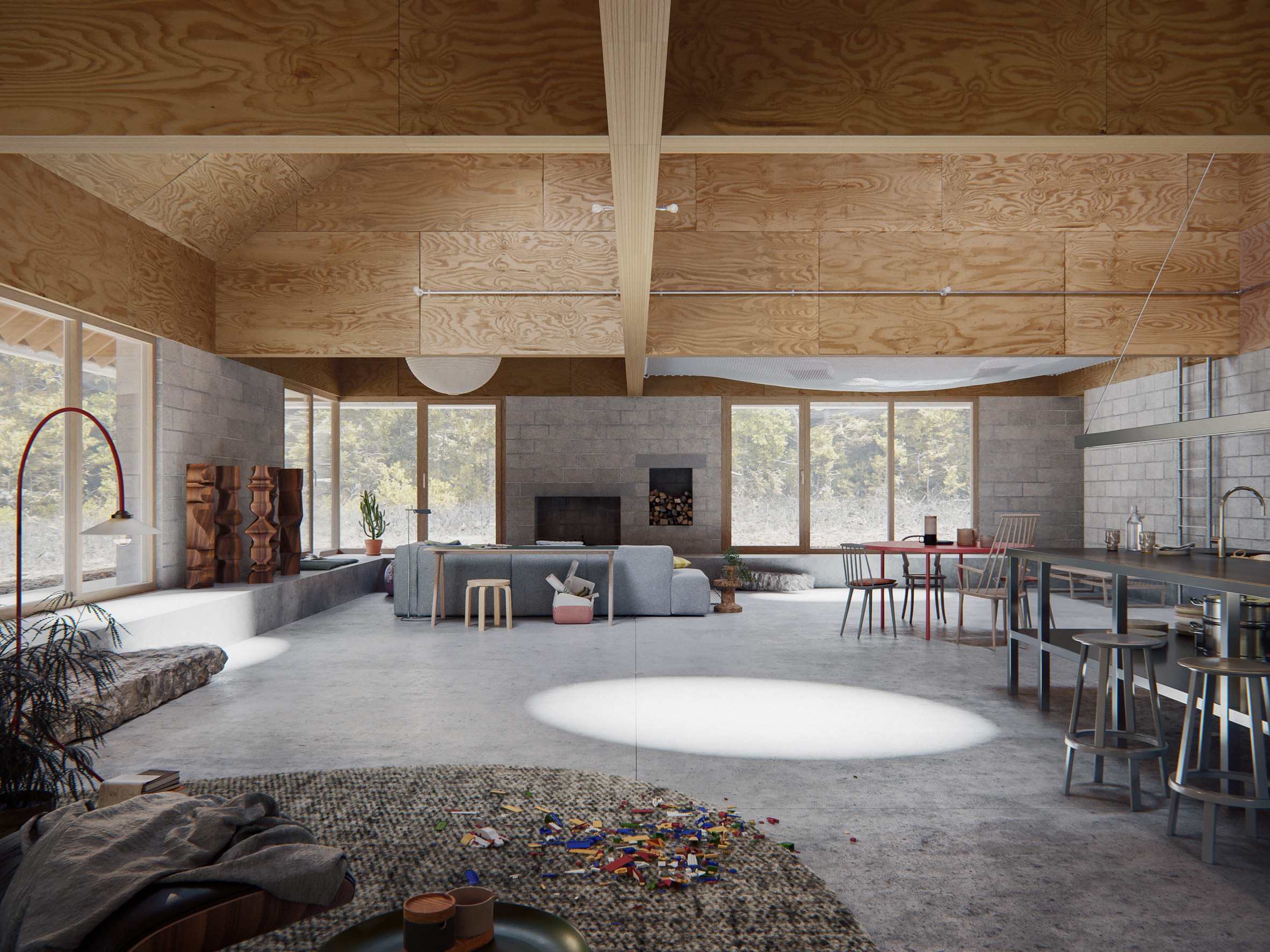 These precedents played a role in the conception of the Berkshires cabin.

“The House of the Woodland employs a form of the nine-square grid, establishing a dialogue with the reoccurring use of this organisational typology throughout architectural history,” the studio said in a project description.

WOJR’s scheme departs from many other nine-square buildings in one significant way. The grid is only apparent in the ceiling plane and is not evident in the ground-floor plan. 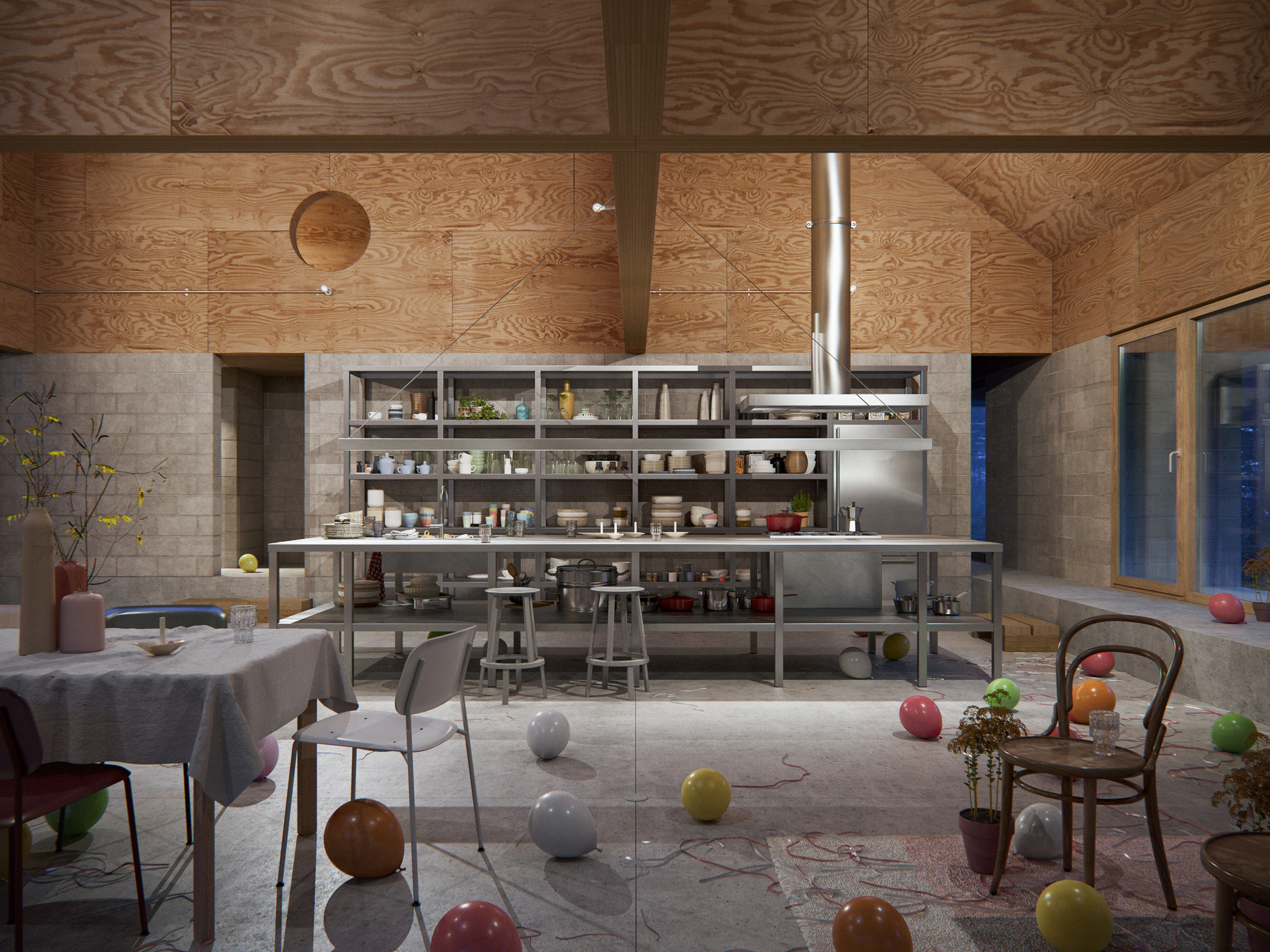 “The volume on the ground level of the building is evacuated of structure, allowing the nine-square grid to be present only in the figures tracing the large-scale coffers above,” the studio said.

The ground level contains an open-plan public zone, along with two symmetrical bedrooms. A metal ladder leads to a sleeping loft. 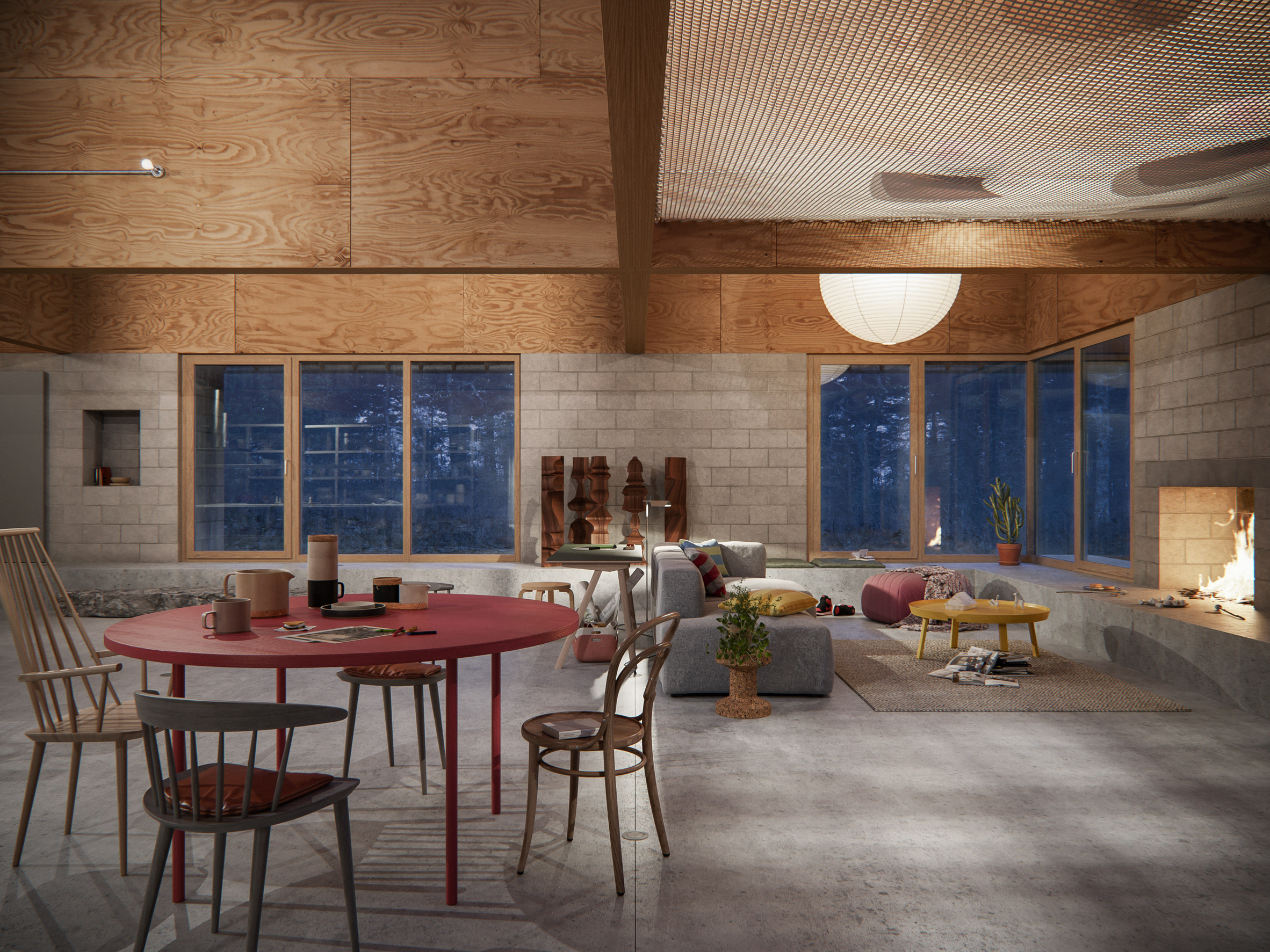 The ground level is sunken 16 inches (41 centimetres) into the ground. The floor is ringed by a concrete bench, which can be used as seating and shelving. The bench also acts as a stair that enables entry and exit through the home’s glass doors.

The interior has a raw aesthetic, as shown in the set of highly realistic renderings by Los Angeles studio D-Render. Structural elements are left exposed, including the plywood ceiling and masonry walls. 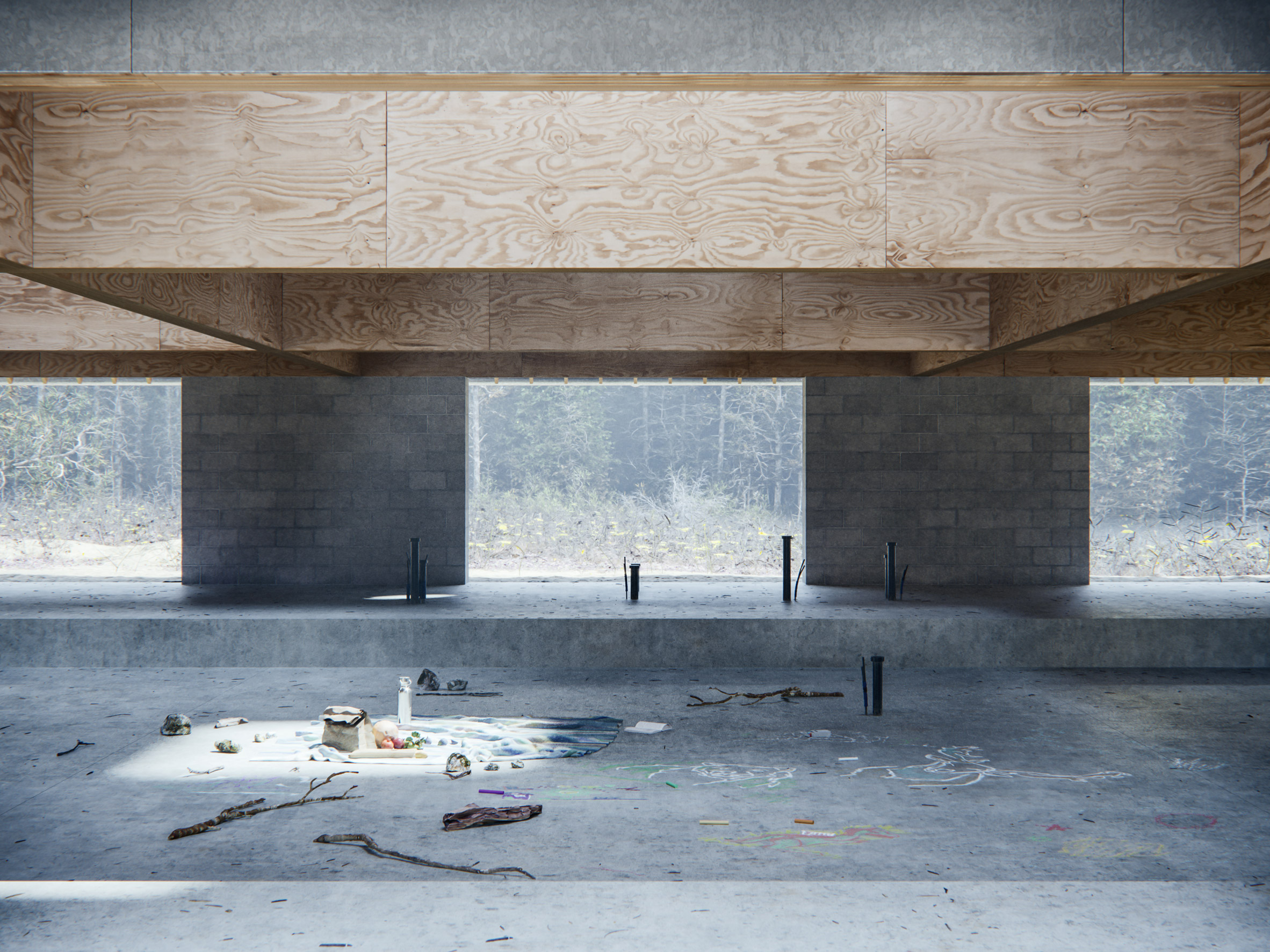 A net is suspended over a portion of the great room, adding a playful touch and allowing natural light from a skylight to penetrate the space.

“The House of the Woodland is fundamentally about the intangible generosity of space itself that allows everyday materials to be recast into a new and unexpected whole,” the firm said.

Construction of the residence is expected to begin within the next two years. The renderings of the home are unusual in that they capture the construction process –not just the finished dwelling. 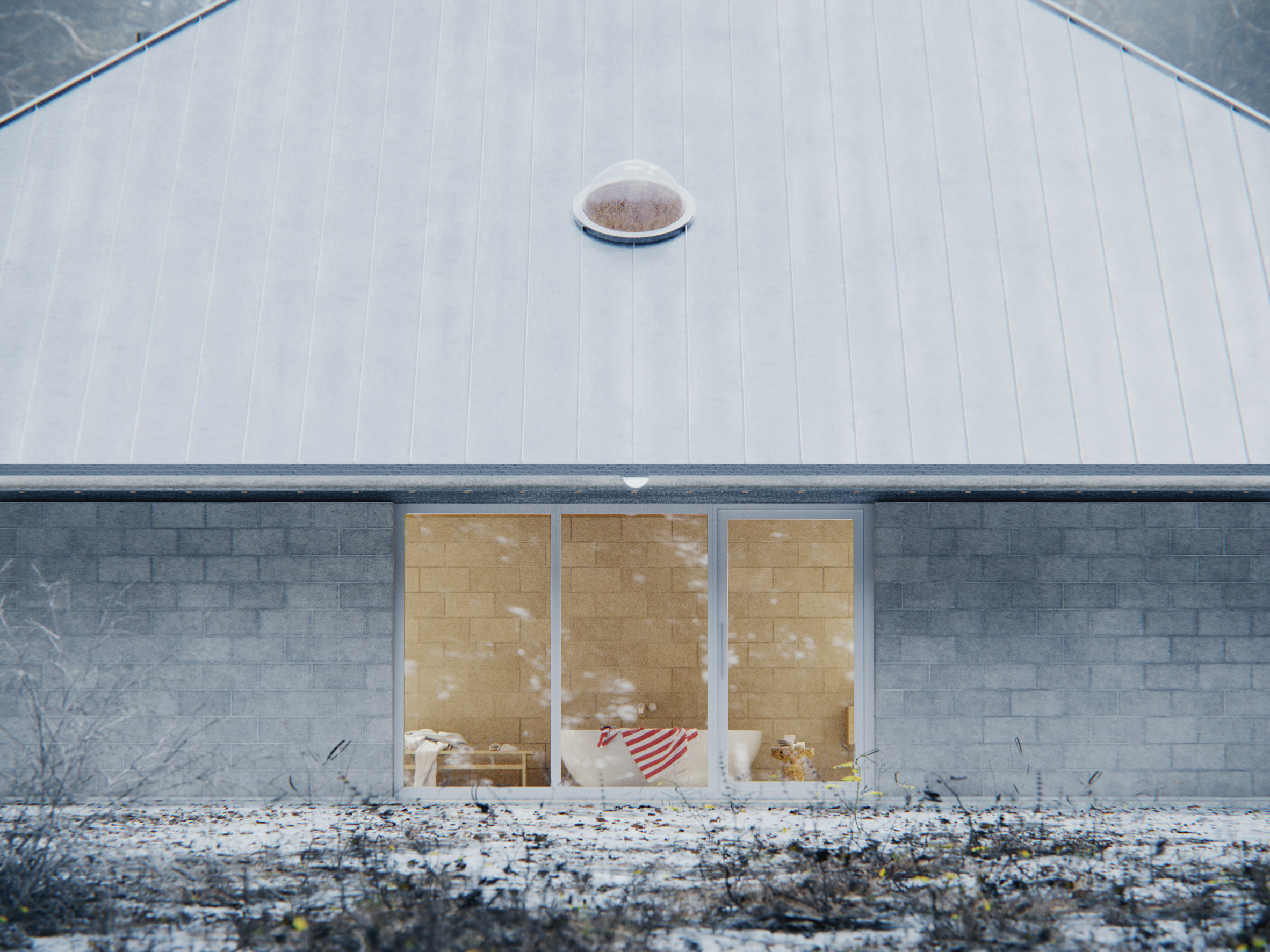 The visualisations are meant to convey a “slowness and an awareness of temporality” that permeate the project, from start to finish.

“There are three marked moments anticipated in the construction of the building that provide distinct experiences of the woodland,” the team said.

The first moment is the act of creating a space in the woods, which will occur when the concrete foundation is poured and the masonry walls are erected. The next moment entails protecting the space through the construction of a roof. 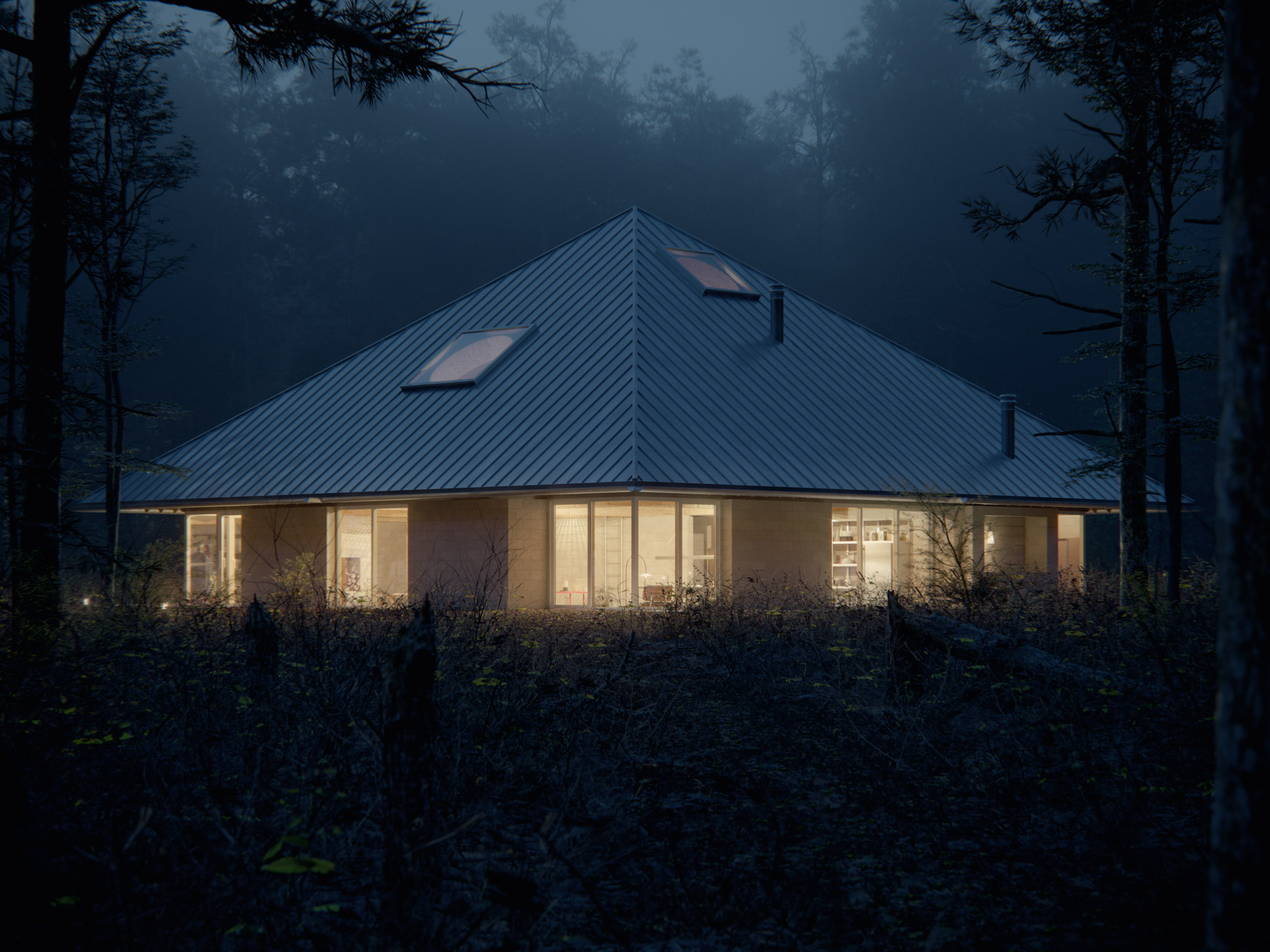 In the final moment, the pavilion is filled with interior walls, glazing, and “other elements that make a building a home”.

WOJR was founded by William O’Brian Jr, a graduate of Harvard‘s architecture school and a professor at MIT. The studio has has designed a number of conceptual dwellings, including House of Horns in California, which features a dramatic roof that dips and swoops upward, and a forest cabin on stilts conceived for a grieving man.

The post WOJR envisions House of the Woodland topped with huge roof for Massachusetts forest appeared first on Dezeen.