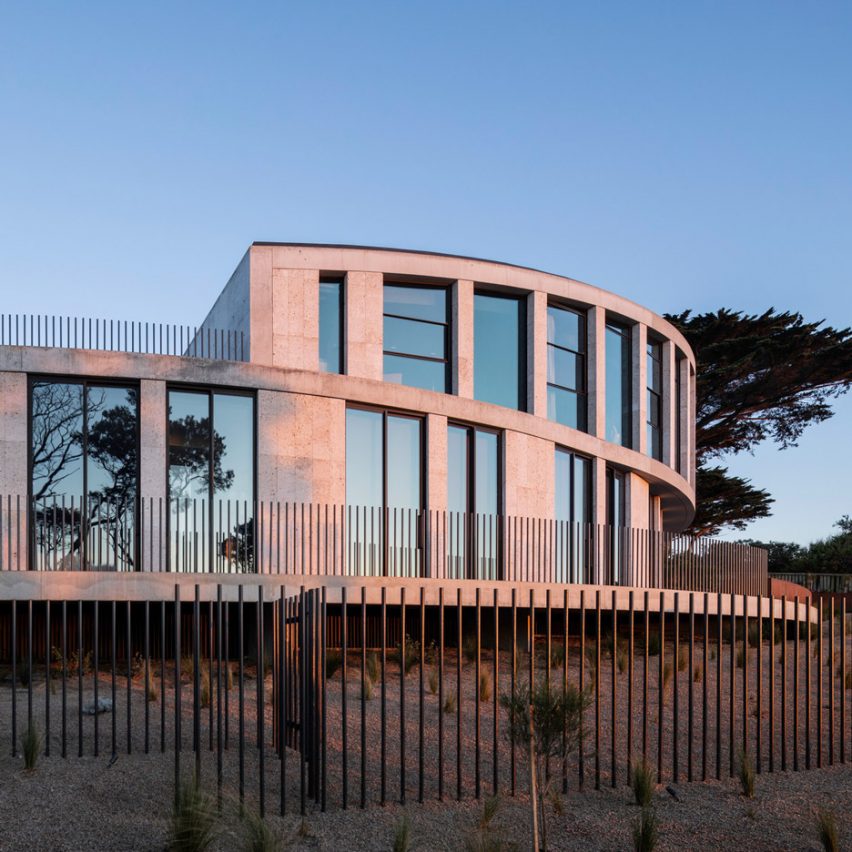 Tidal Arc House by Woods Bagot has an arcing limestone facade with full-height openings looking out towards the sea on the coast of Victoria, Australia. 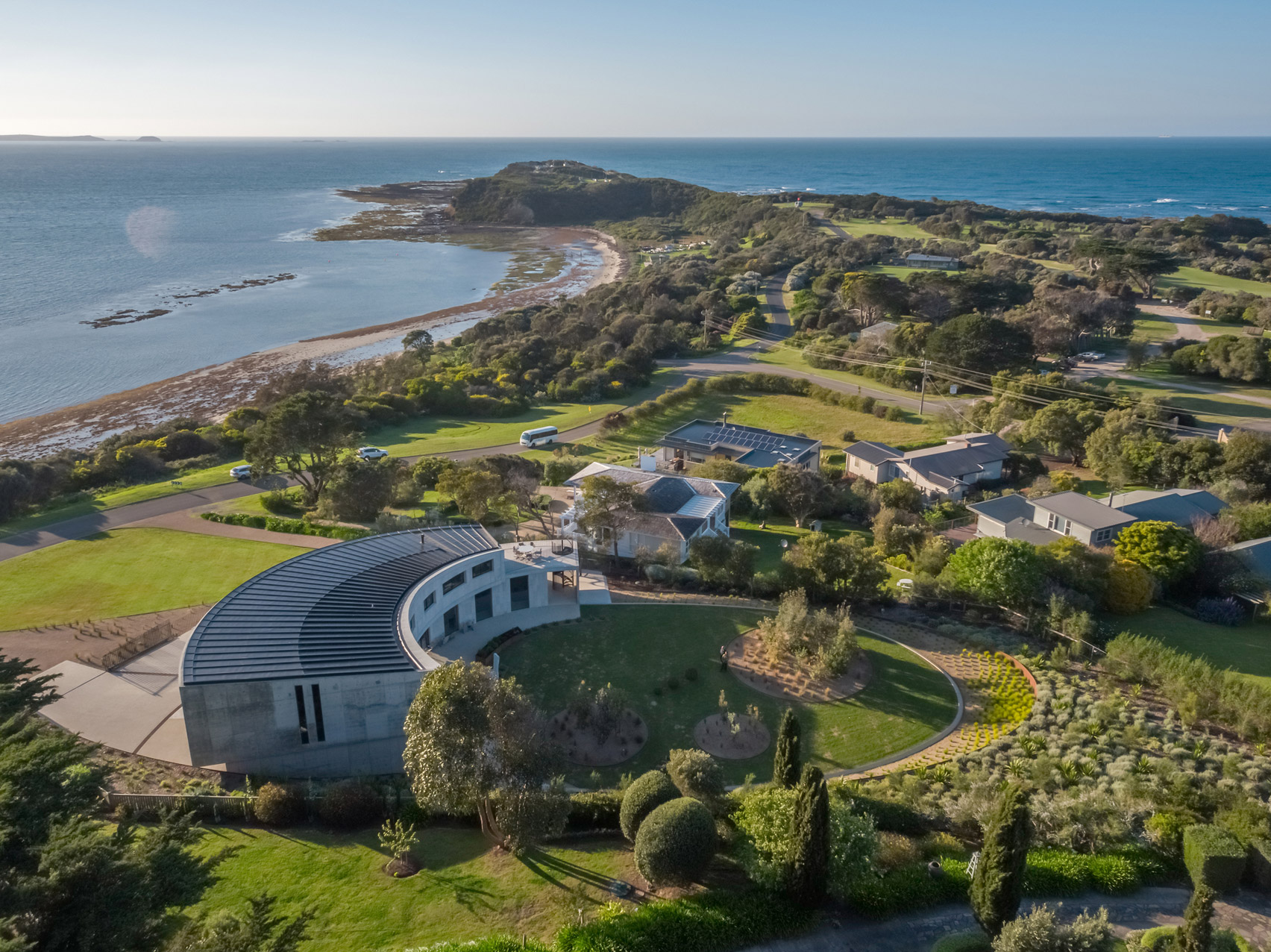 The architecture studio decided to make a dramatic departure from the typical “timber box” houses that make up the majority of the area’s architecture.

“The distinctive curved form mimics the massive water movement of the Southern Ocean,” said the architects.

“[We] eschewed the colonial planning grid and repetition of the local timber-clad cottage in favour of sensitivity to the heroic topographical context.” 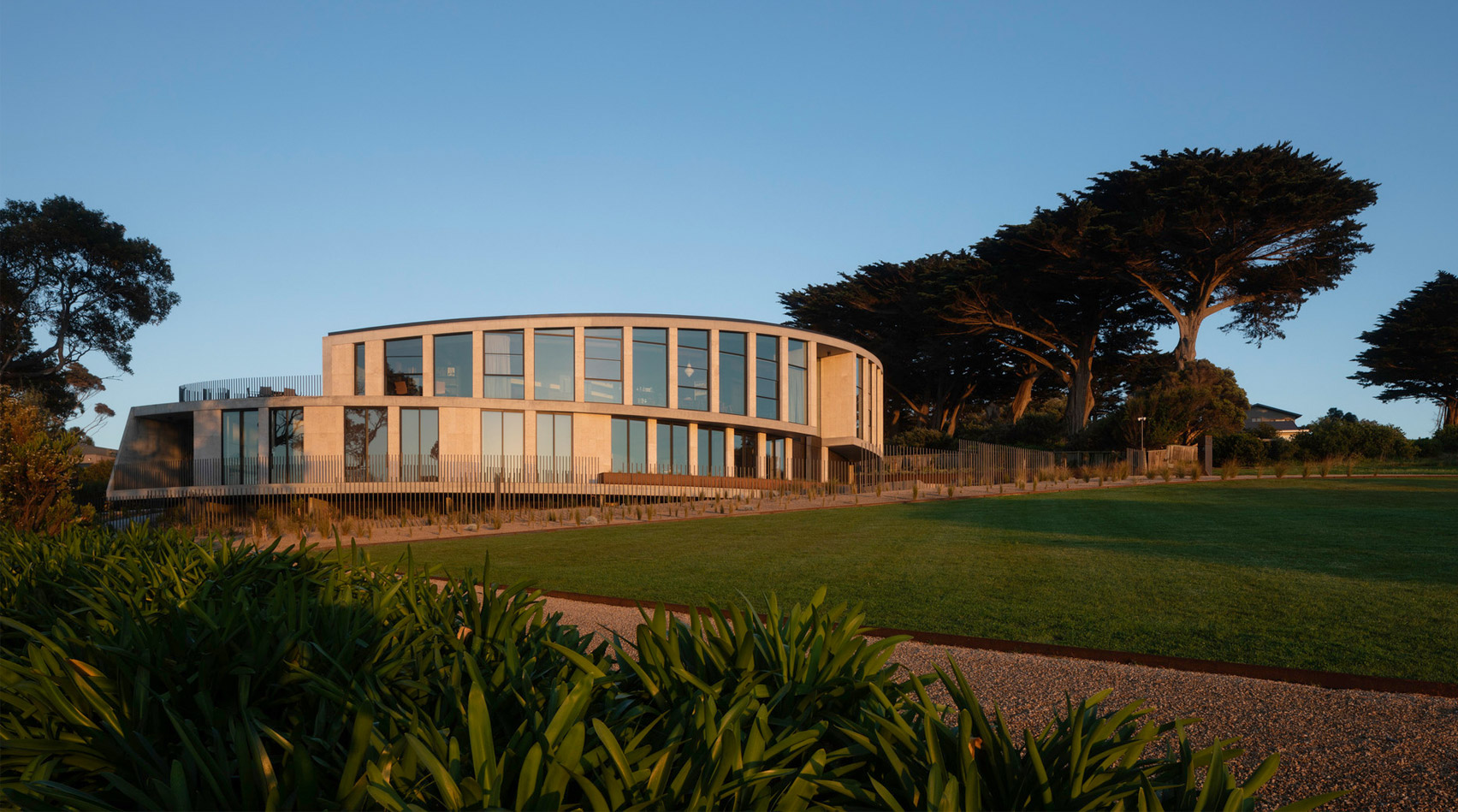 The crescent-shaped floor plans occupy the eastern edge of a landscaped ovoid site, partially enclosing a large central garden onto which the house looks with a decked seating space.

A series of concrete piles run through the curved floor plates, which have been displaced slightly so as to cantilever over the grounds of the home. These radiating concrete columns run through each floor, from the basement level to the sloping, zinc-clad roof above. 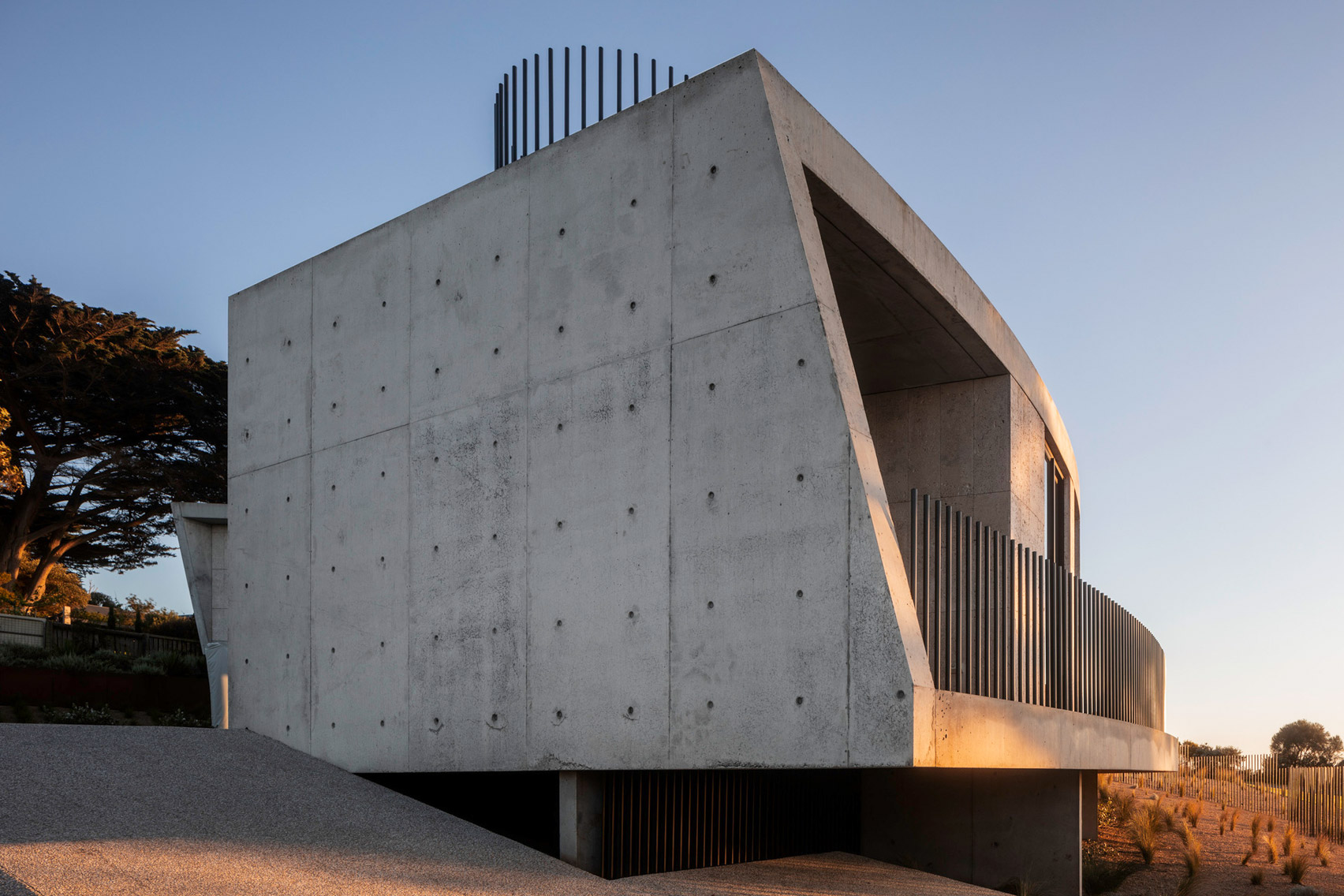 “There are no parallel curves on the project and no right angles. The geometry is as dynamic as the weather and tidal movements,” said the architecture studio.

Supports and the floor-plates are made of concrete, and sections of the facade are clad with a fossilised limestone material, covered with distinctive clam shell patterns to echo the Jurassic-era coral that makes up the peninsula’s geology. 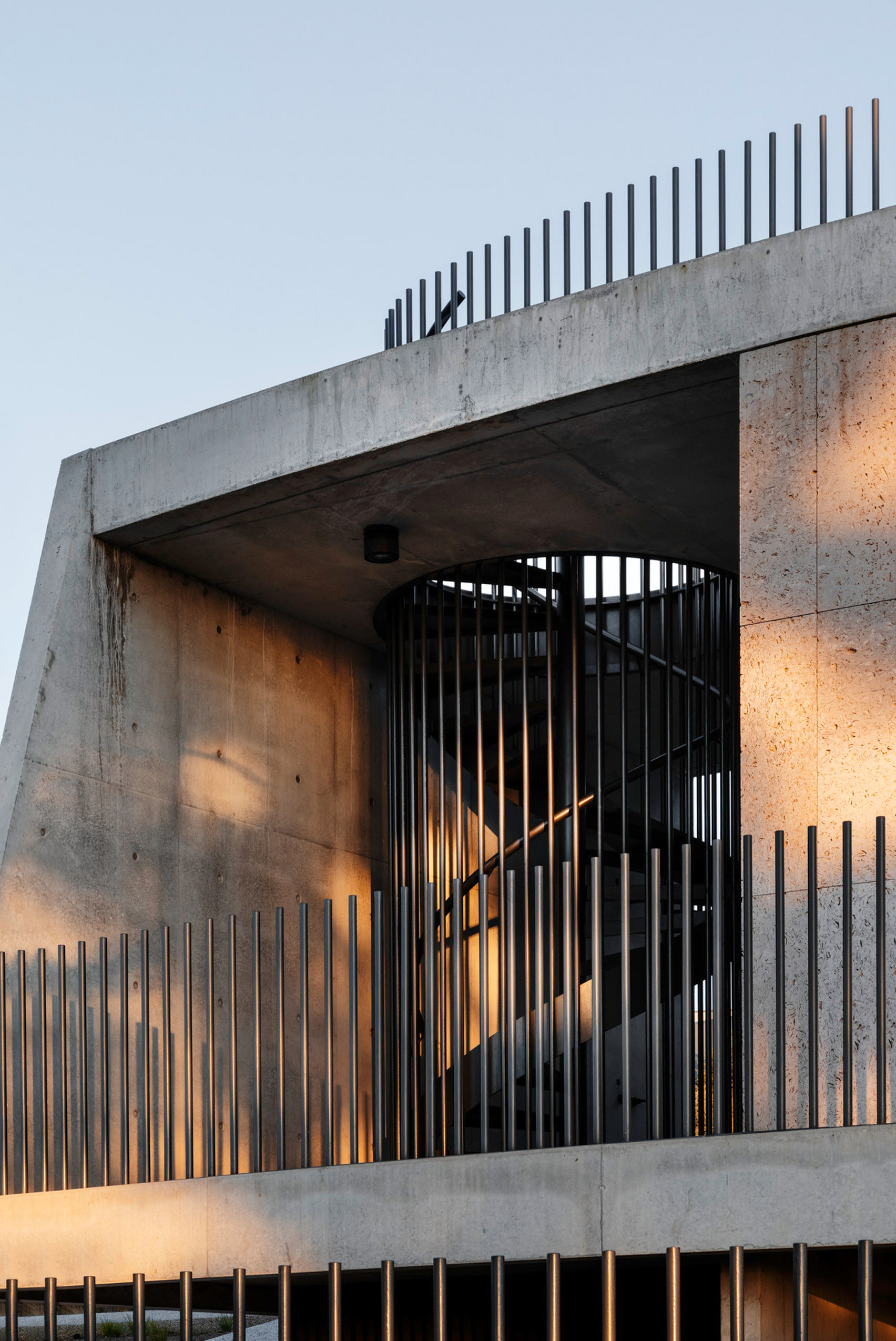 At ground level, the entrance leads into a large living space, offering views through the entire house to the sea beyond.

Guest bedrooms are arranged around the curve of the plan, separated from a corridor that overlooks the garden by dark timber forms that double as wardrobes. 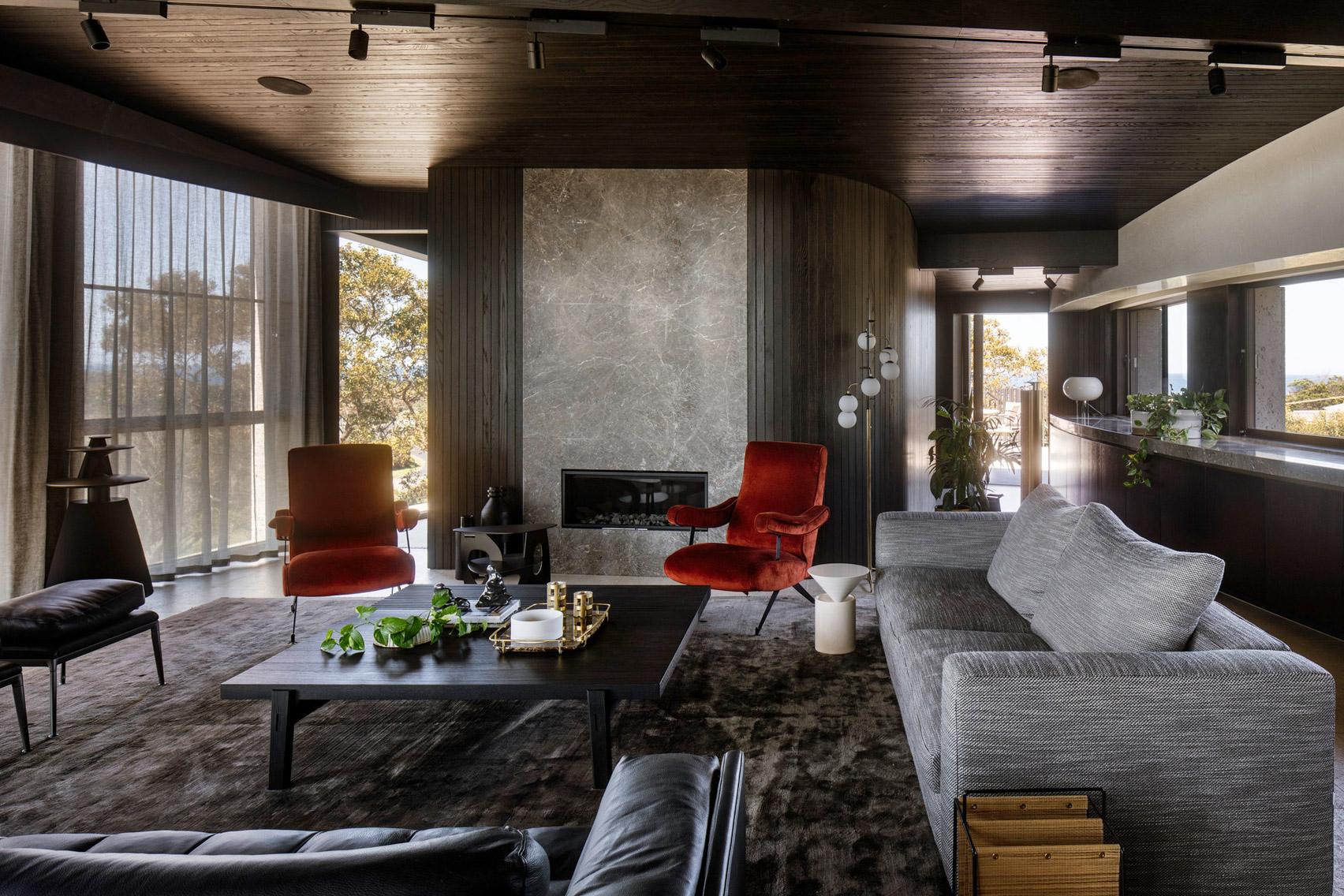 “Each internal room compresses and opens out to the sky, enveloping inhabitants in the exhilarating impact of the location.”

At the northern end of the house, a large stone and dark timber-clad staircase runs from the basement wine-cellar and plant to the upper level, where it acts to separate the master bedroom from a large living area dedicated to the views from the site in either direction. 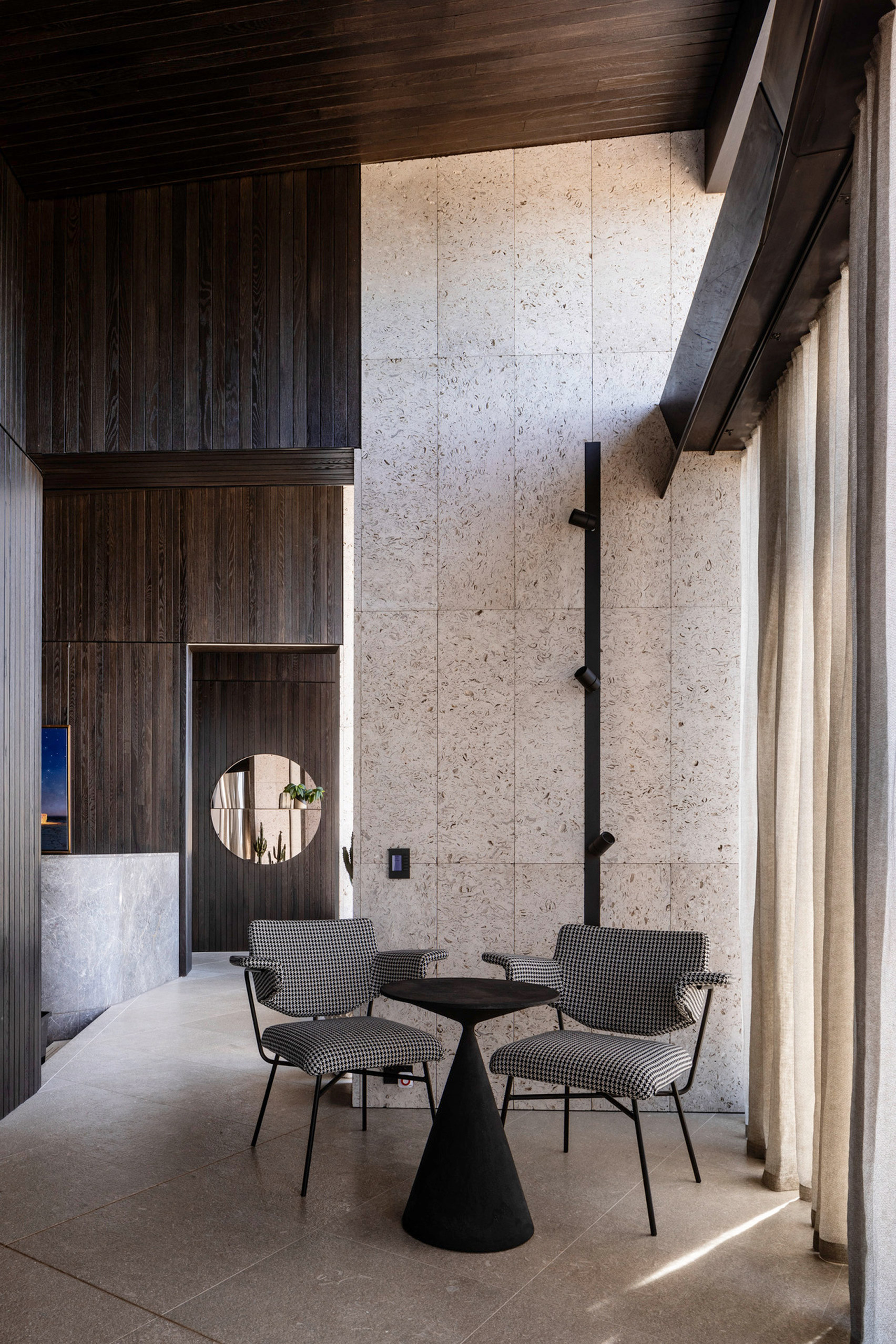 At the far southern end sits a small terrace, accessible directly from ground level via a metal spiral stair.

With a large amount of light entering the house, interiors have been finished with darker materials; rich brown woods, exposed limestone and concrete and black timber create spaces that contrast the open environment of the site. 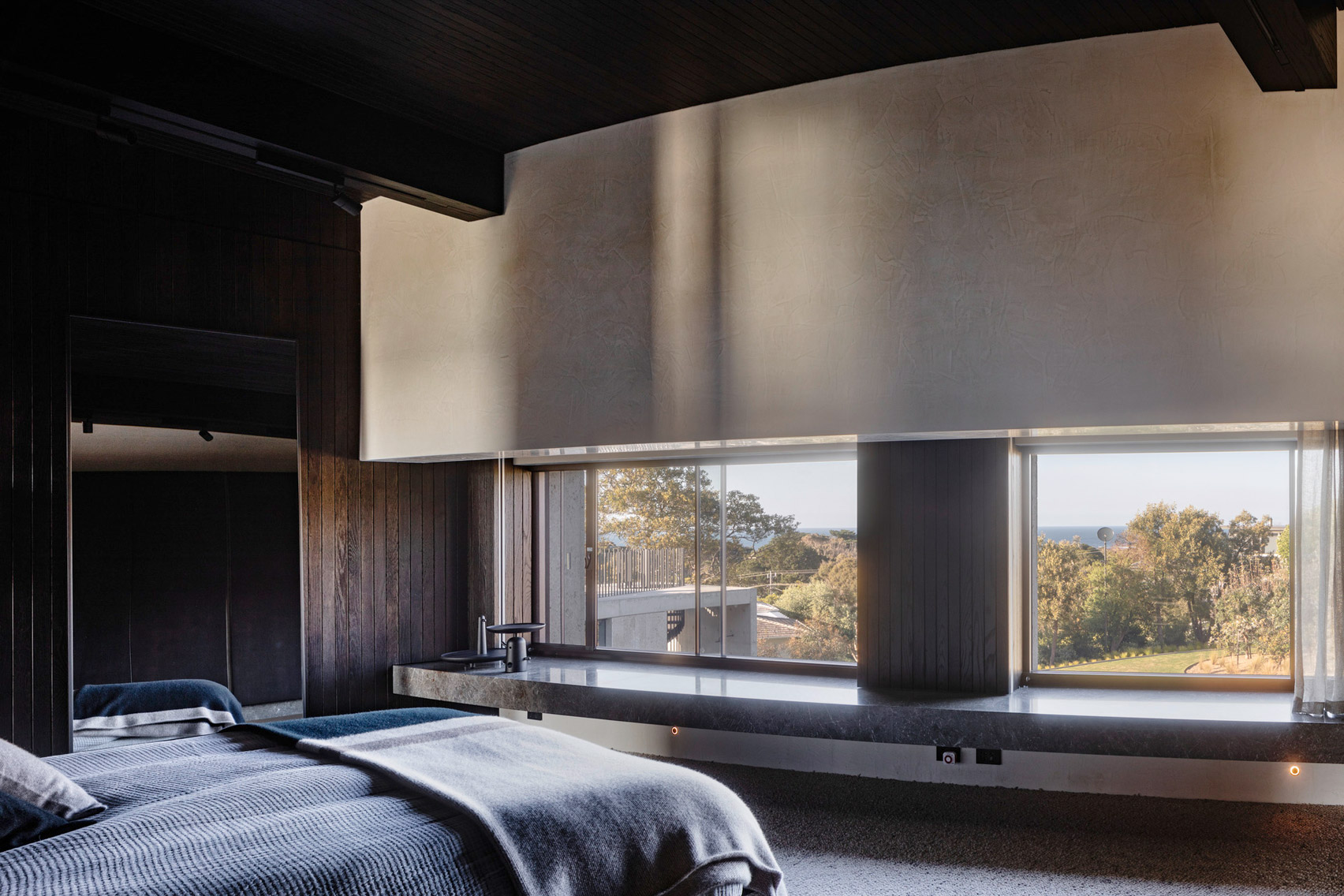 The practice used a similar approach to material in a Melbourne apartment block, with stone, concrete and zinc forming a rich, earthy response to the surrounding landscape and buildings.

More recently, the practice has won a competition to design a major new art gallery in Adelaide in collaboration with Diller, Scofidio + Renfro.

Photography is by Trevor Mein.