Zaha Hadid ‘s recently completed Miami skyscraper One Thousand Museum – one of the late architect’s last buildings – is revealed in a short movie and photography. 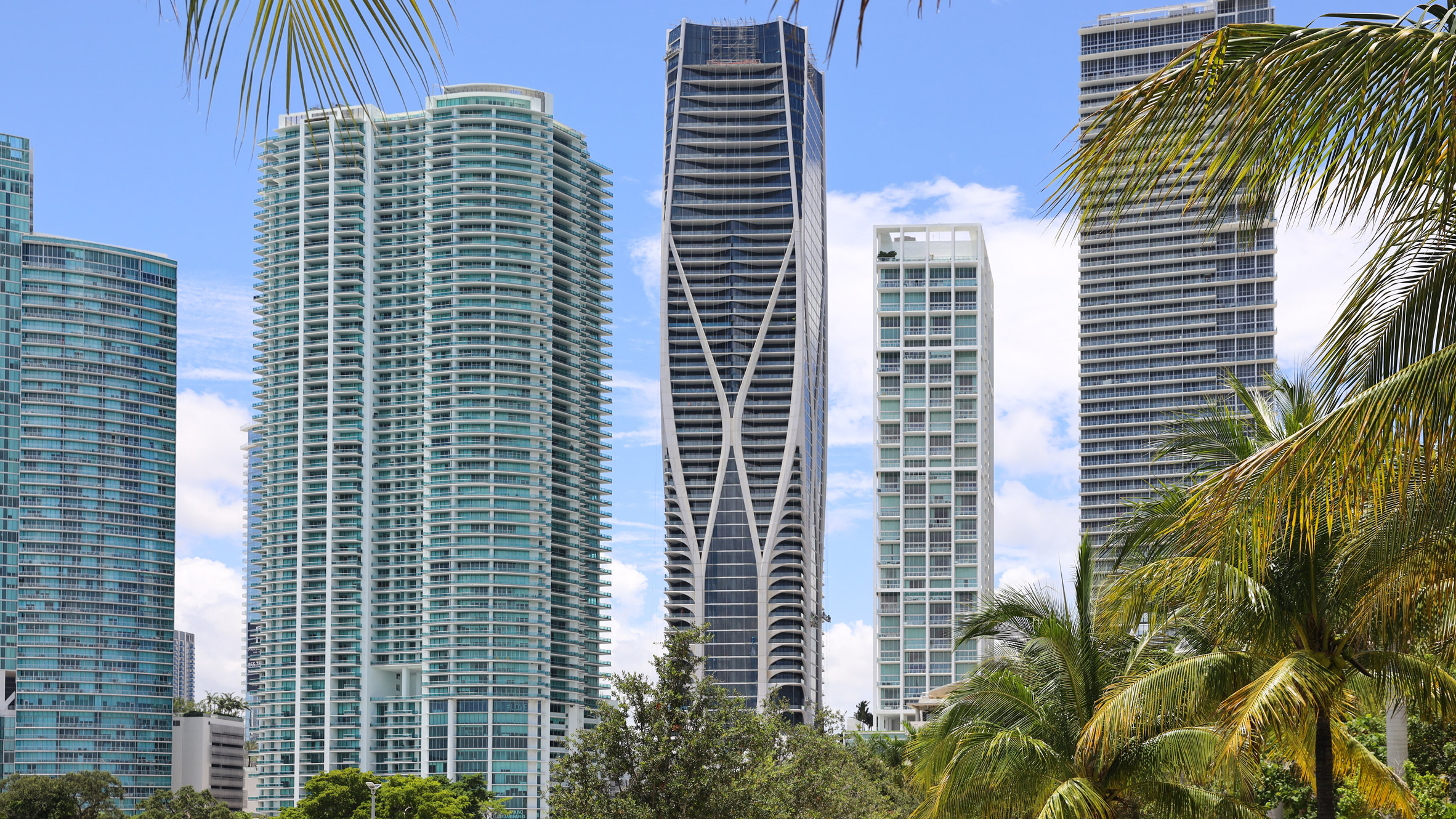 Completed at the end of last year, One Thousand Museum is a 62-storey residential skyscraper located on Biscayne Boulevard in Downtown Miami among a row of towers opposite Museum Park. It rises 700 feet (210 metres) high and has glass facades encased by a curvaceous “exoskeleton” that comprises 5,000 pieces of lightweight glass-fibre-reinforced concrete.

The exterior formwork curves at the corners of the building to form balconies for residences on the lower levels, and then traces sinuous lines higher up that “tuck” in other terraces. While the curvaceous forms are typical of Zaha Hadid’s style, the exterior was devised to respond to the weather conditions of Miami which is prone to hurricanes.

At the base, these structures widen and splay out to form “rigid tubes”  that are “highly resistant” to demanding wind loads, according to Zaha Hadid Architects . 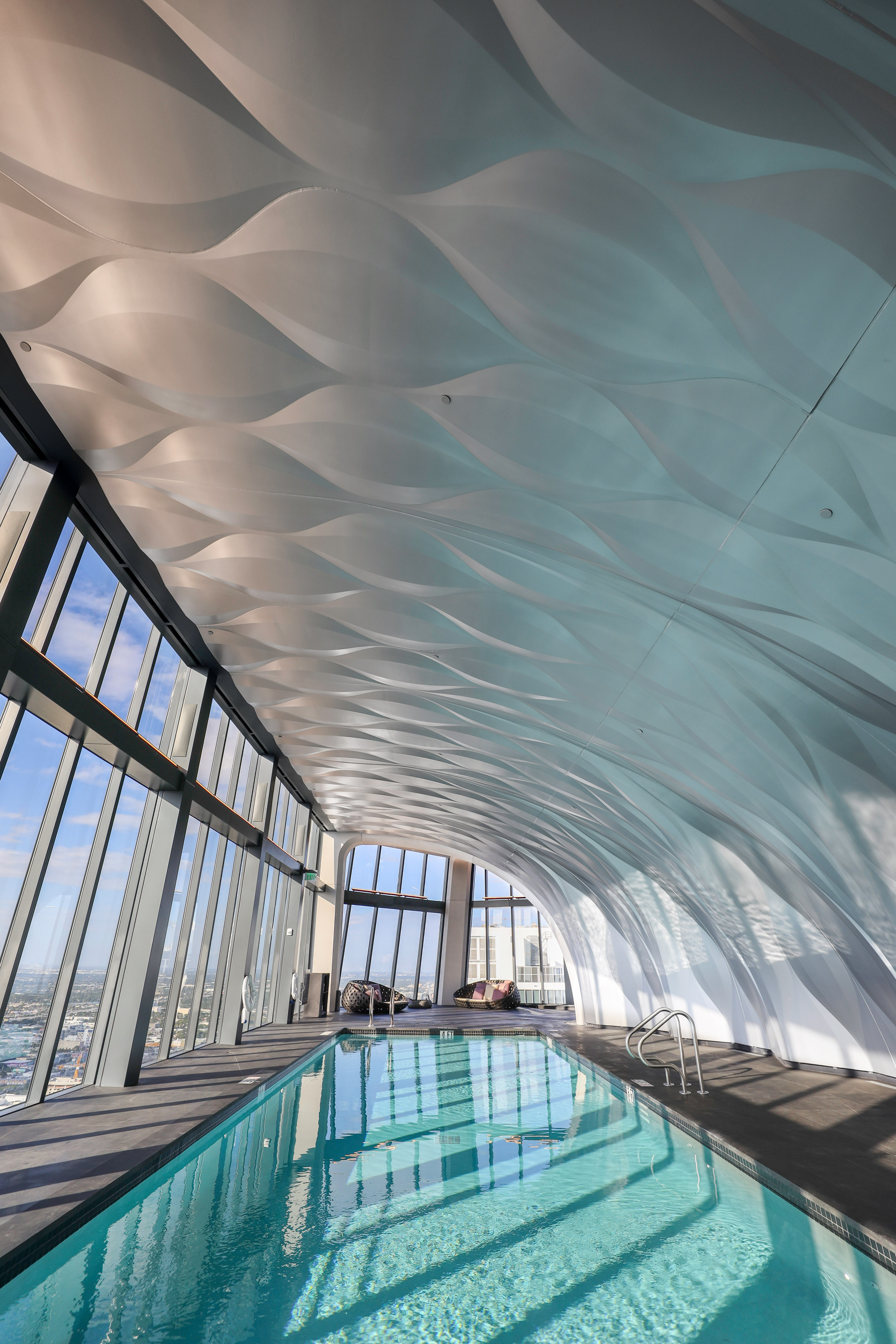 “The design expresses a fluidity that is both structural and architectural,” said the firm’s project director Chris Lepine.

“What you see is literally structure getting thicker and thinner, as needed,” he added. “There’s a continuity between the disciplines, between the architecture and engineering.” 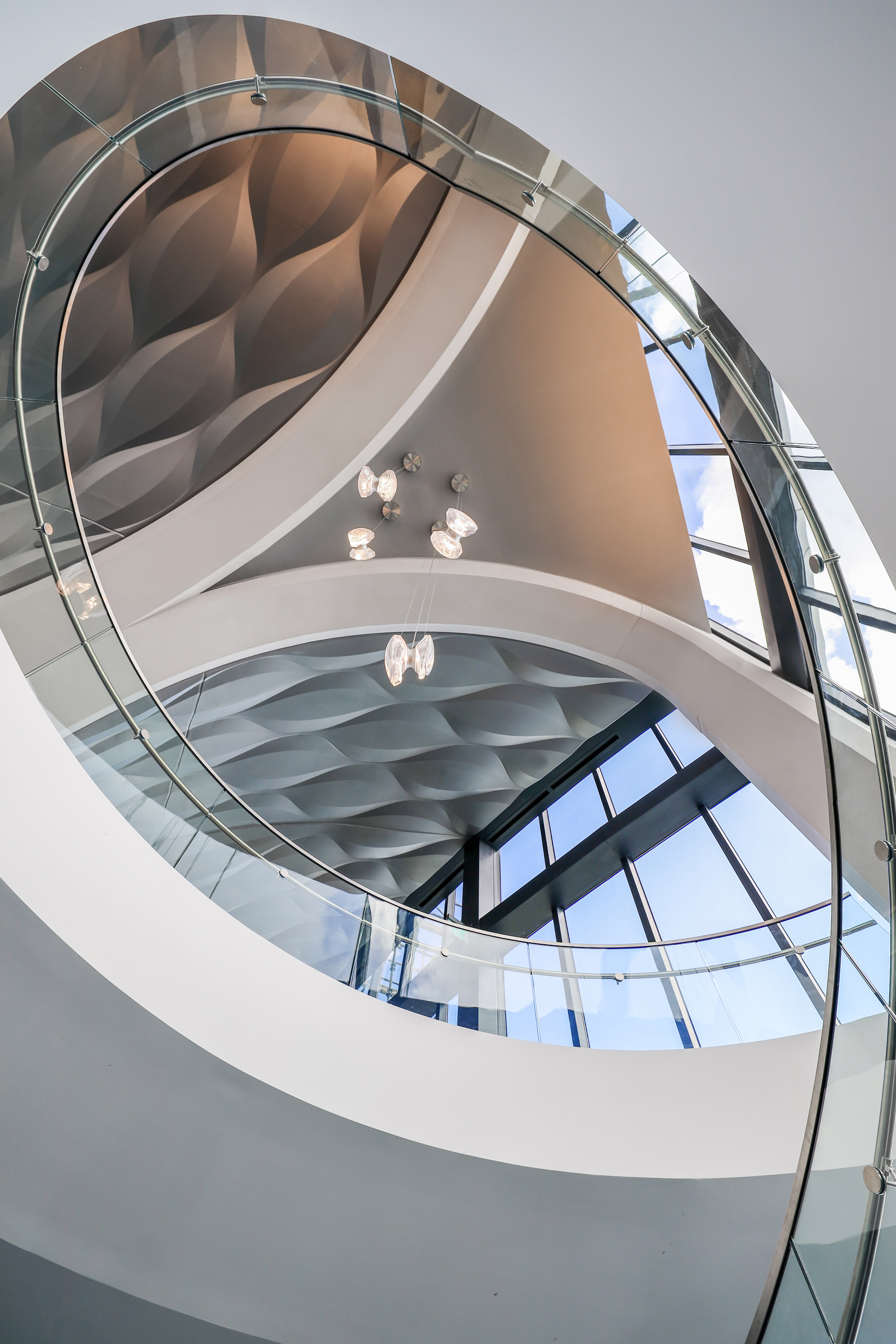 The tubular elements cover outdoor areas interspersed with a swimming pool and gardens on the ground level – a number of luxury amenities in the condo tower.

Others include the double-height swimming pool at the top of the tower, which is covered by a rippled, metallic ceiling. Called the Aquatic Center, it has large windows that provide views across the city and ocean from the pool, as well as the adjoining seating area. 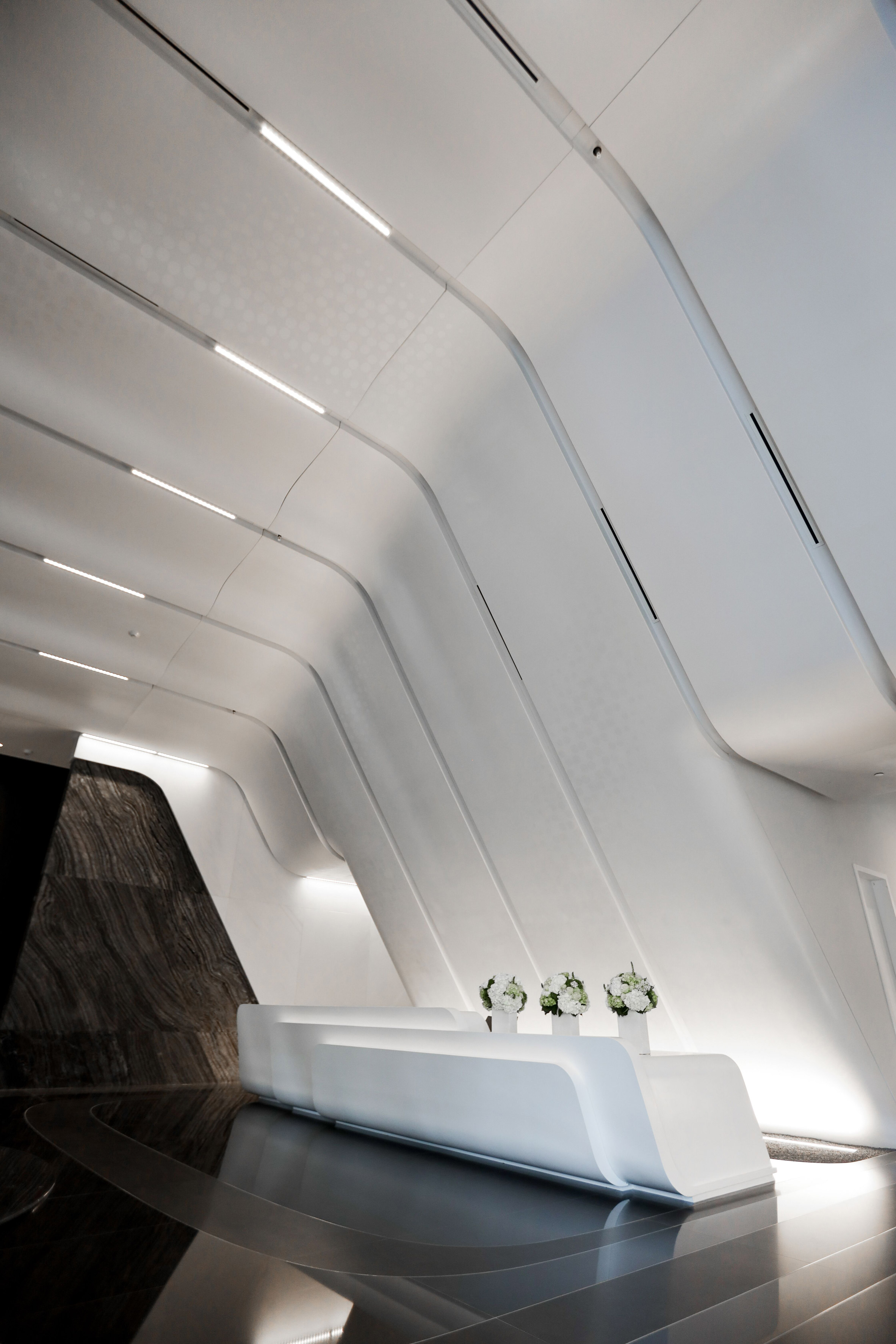 Residents have access to a spa complete with a sauna, steam room, rain shower, as well as private rooms for treatments and massages.

There is also an all-black multimedia theatre for private movie screenings, a helipad on the roof, the Sky Lounge events space and a fitness centre. 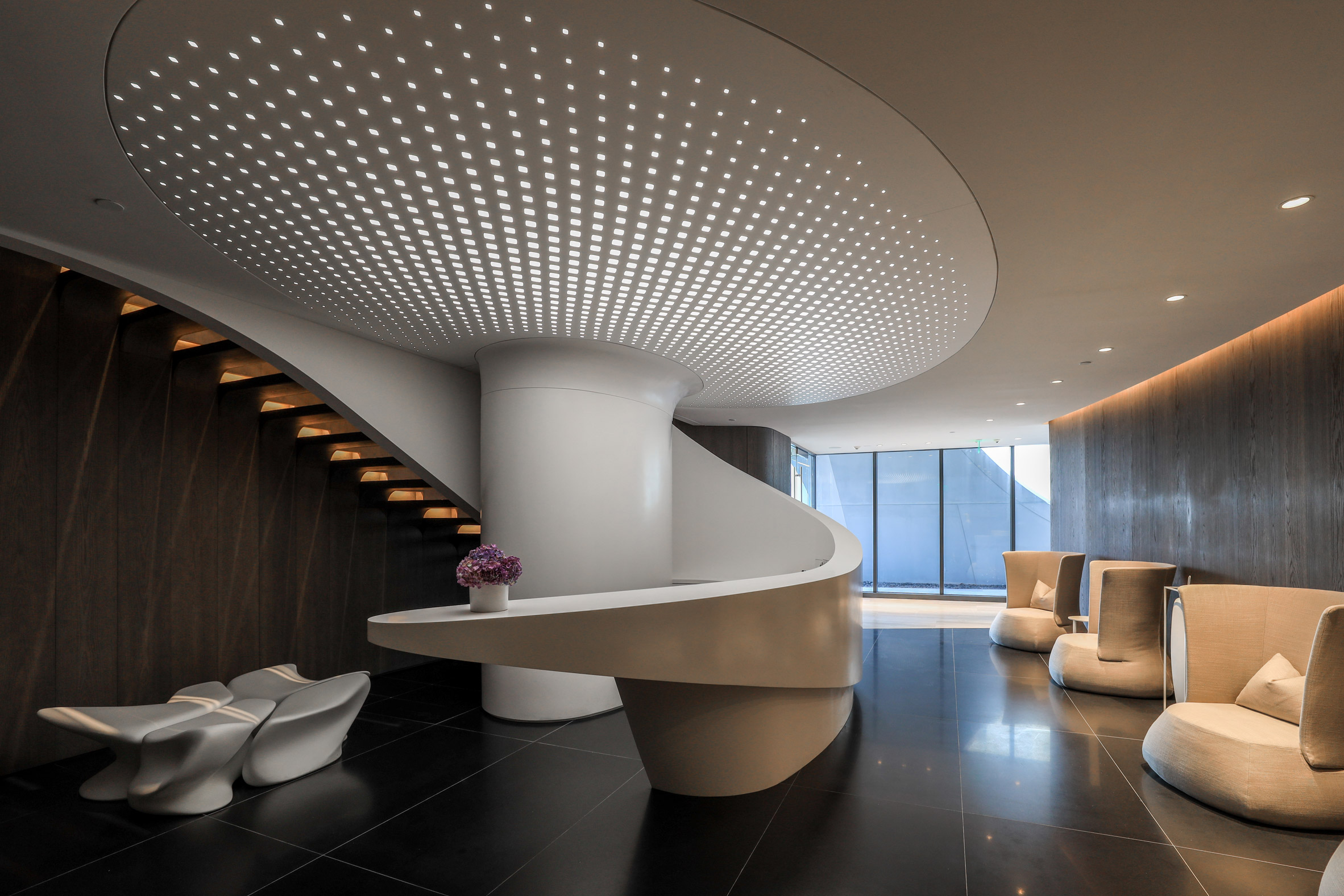 Curvaceous features continue throughout the interior of the building, including larger rounded windows and the slanted, white forms of the reception desk in the lobby that mirror the shape of the curved ceiling above it.

In the lobby, the white surrounding is contrasted by black floor tiling in the lobby that is marked with sinuous lines and a weathered wooden feature wall. 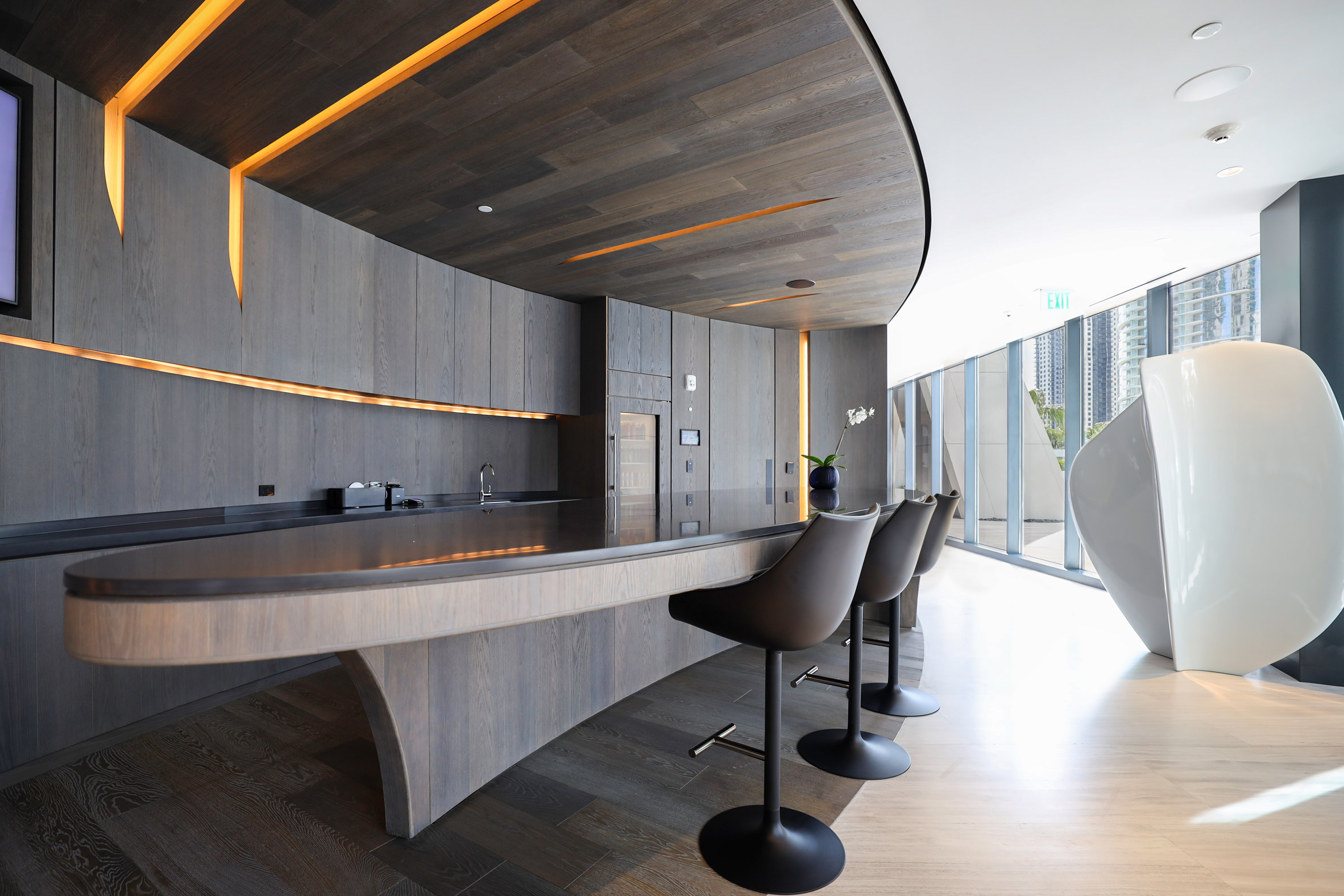 Eighty-three residences are located in the condo tower in a variety of layouts, from four townhouse-style properties to 70 half-floor apartments, eight duplex penthouses that occupy entire floors and one penthouse.

Six of the residences have been completed and fitted out by furniture brands Artefacto , B&B Italia , Roche Bobois, Luxury Living Group and Meridiani. 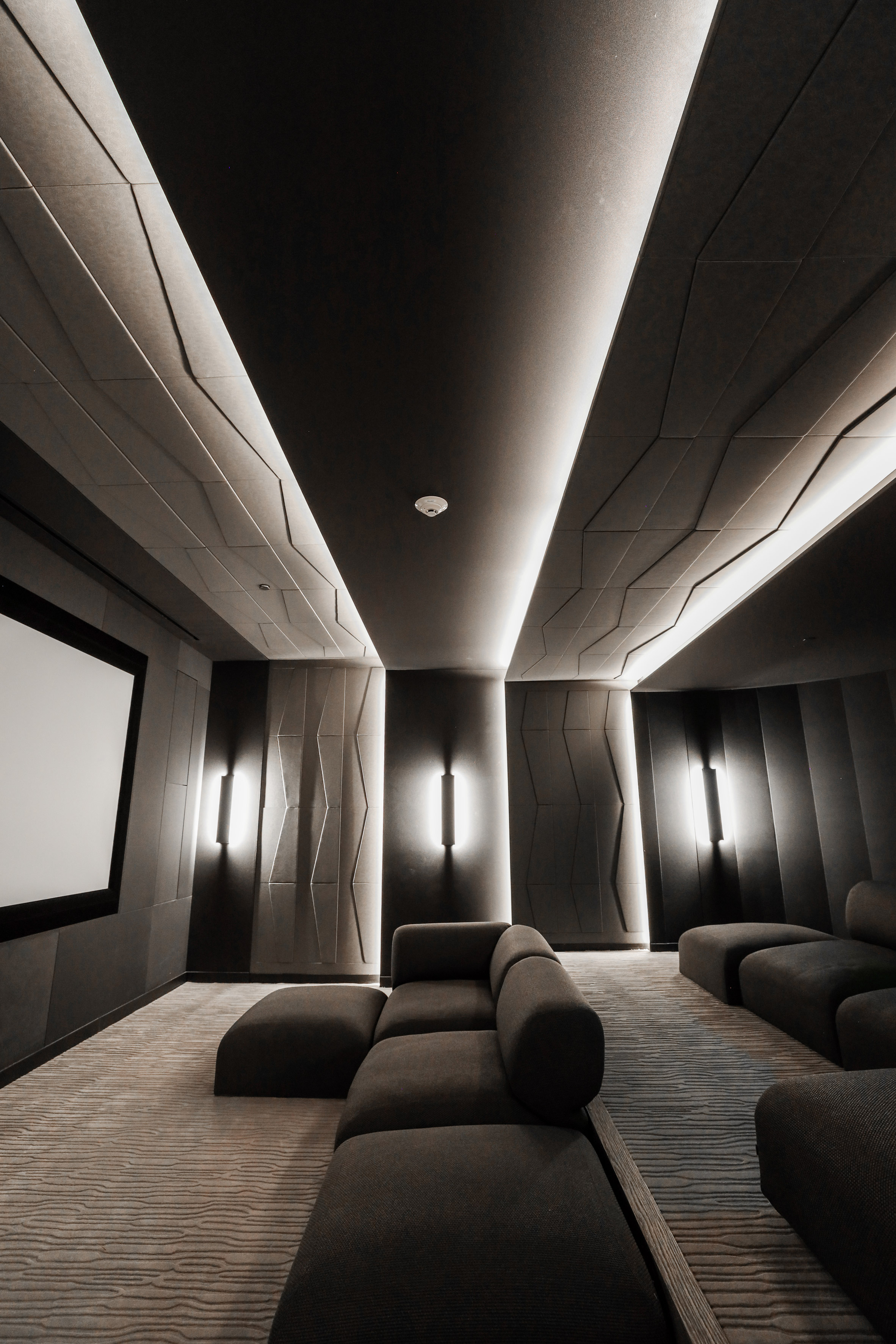 Zaha Hadid created One Thousand Museum for developers Louis Birdman, Gregg Covin, Kevin Venger, Regalia Group and New York-based Plaza Construction. First unveiled in 2013, it marks one of the last that the architect worked on before she died suddenly in 2016 .